The Saegerts: A blonde or four in the family

Some years ago, when I'd retired from writing books, I thought that I might, nevertheless, put together -- as an appendage to my Lydia Thompson biography -- some short sketches about her girls: The Blondes. I started, but I didn't finish, because a fine Franco-German journal came along looking for an article: I gutted my blonde piece, and they published the three most important biogs from the half-done work (in English) a year or two back. The other most interesting lady was sidewound into Victorian Vocalists, and I was left with a bundle of bits and pieces without a raison d'être. So, like the leftovers of other incompleted projects in the past, the Blondes were abandoned and exiled to my hard disc.

Well, today I was using microsoft's very peculiar search thingy, to find out where some files, which should have been on my desktop, were, and up popped this little piece. So, I thought ... bit of a break from proof-reading ... let's blog it. And here it is.

A BLONDE OR FOUR IN THE FAMILY

And at least one of these girls had definite theatrical talent and a long, post-tights career as an actress, wife and more than slightly celebrated mother.
SANTON, Alma [SAEGERT, Alma Maria Johanna] (b Shoreditch, 6 December 1849; d London, 4 January 1922).

Family business first. William Peter Theodore Saegert, moulding manufacturer, printseller, carver and gilder, and probably, from time to time, practicing other related professions too, from Greifswald in Northern Germany, emigrated to England where he married Miss Anna Margaret Maria Cutter (1824-1881), daughter of one Samuel Jacquemart Cutter (1791-1838), of a French Huguenot family, and his wife Mary Esther née Peet. And from them sprung our Saegert girls.

Parenthetically, Mr Cutter’s youngest daughter was named Sophia Hep(h)zibah Cutter (1833-1903), and, for a brief while, she apparently essayed a career as an actress. During that time, she encountered the decidedly celebrated theatrical producer Mr Alexander Henderson and the result was a little Alexander Francis Vere Cutter ka Henderson (1866-1933) who was, thus, as much a ‘cousin’ to the Saegerts, as Henderson was an illegitimate ‘uncle’. So, theatrical ‘family’, but of a wrong-side-of-the-blanket kind. But, as it would eventuate, very iuseful theatrical family.

There were four Saegert girls. The eldest was Alma, then came Wilhelmina Augusta Sarah Anne (b 1851), Madaline Louise Mary (b 1853) and Johanna Caroline Theodora (b 1855). Then a brother. All four girls went on the stage. And if my suspicions are correct (and I’m fairly sure they are) all four took a turn with the Alexander Henderson and Lydia Thompson companies, under a variety of names.

Alma was the first to show up in the press, but not on the stage. Her name appears in the 1864 lists of the adult education section of the London Mechanics Institution as a prizewinner in … arithmetic!

In 1870, I spy her appearing with the amateurs at St George’s Hall, and finally as a professional at Manchester, playing the Fair Imogene to the Alonzo the Brave of Rose Coghlan and opposite the Faust of Carlotta Zerbini. She followed up as Cupid in Dick Whittington (!), Agnes in Little Em’ly, and in a burlesque William Tell in Oxford, all as ‘Alma Saegert’, before she switched to being ‘Alma Santon’ for her London debut, at Christmas 1871, playing Smike at the Court Theatre in Dotheboys Hall alongside Teddy Righton (Squeers) and Rose Coghlan (Tilly). She was praised as ‘earnest, pathetic and never stagey’ and it was agreed ‘she promises extremely well’. She carried on to the Vaudeville (Brown the Martyr), to feature opposite Robertha Erskine in The Sylvan Statue extravaganza at the Surrey Gardens, and, after a season at Southampton, to play with Patty Laverne in Kissi Kissi at the Opera Comique.

In the meanwhile, up at Liverpool, Mr Edward Saker’s 1871 Royal Alexandra pantomime, Little Jack the Giant Killer, with Emma Chambers and Marie O’Beirne featured, had introduced two newcomers. The Misses Augusta and Dora Stuart. Eigentlich Saegert. Both girls would spend a good few years on the stage, Augusta as ‘Stuart’, Dora as ‘Stuart’, then ‘Temple’ and finally ‘Santon’.

Augusta went off to the Theatre Royal, Birmingham, but then all three sisters came together with the fourth, Madaline, on board ship with Miss Lydia Thompson, heading for a season at the Olympic Theatre, New York. Mephisto and the Four Sensations opened on 25 August 1873. Lydia starred as Pluto, Alma had a good role as Robin Adair, principal boy to the girl of the vocalist Camille Dubois, Augusta featured at La Belle Hélène, and Madaline (Minus) and Dora (Asbestos) had thinking parts. Mephisto was only so-so, and Sindbad was revived to succeed it. Alma was cast as ‘the Sultan’, Augusta ‘the Alaska Fay’ and Madaline and Dora were vaguely Turkish decoration. The cast of Aladdin included Alma (The Vizier), Augusta (The Genius of the Ring) and Madeleine (Te-to-tum) with Dora seemingly part of the ‘maidens and mob’. But everyone was decoration, because the singing ladies, most notably, the superb ‘Miss Ada Beaumont’, were stealing whatever attention was left over by the star. However, Alma was voted ‘of medium height, a good figure and sings well’. The company toured through the usual main centres and, in June 1874, returned to Britain.

Camille Dubois was immediately picked up for the star role in Francis Fairlie’s tour of the piece which had once been Offenbach’s Vert-Vert, and Alma was cast opposite her, as Bibi. Augusta went off to Brighton and the other two I know not where. For it is and was Alma upon whom we now focus. 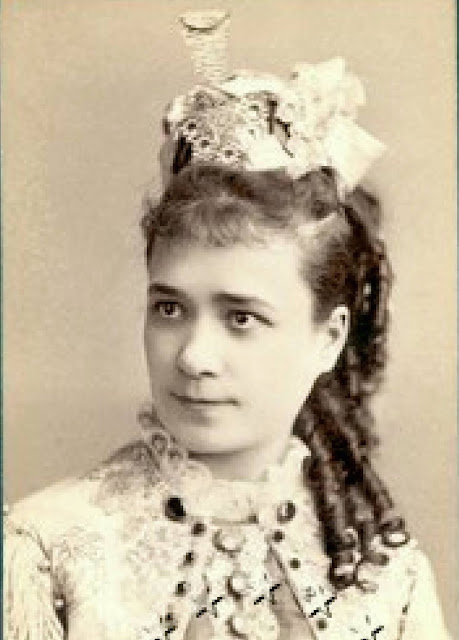 From Vert-Vert, Alma joined the company at the Liverpool Alexandra (Arragh-na-Pogue, Love’s Sacrifice, The Rough Diamond, Alonzo the Brave etc), then visited Newcastle as Lottie in The Two Roses and toured as Bessie Hibblethwaite in An Unequal Match. She appeared in David Garrick with Sothern, as Miss Milroy in Miss Gwilt (‘bright, genial and natural’), took a turn back to pantomime, supporting Carlotta Zerbini in Sinbad, played Anne Chute in The Colleen Bawn (is that another Miss Santon lower down the cast list?), Arte O’Neal in The Shauraughn, appeared in The Willow Copse with William Rignold and in The Octoroon … an in between times went to court to help ‘Ada Beaumont’ (otherwise the Gaiety Theatre’s delicious Annie Tremaine) get her divorce by swearing that she had been living in sin during the Thompson tour to America.

And then it was Alma’s turn. She was engaged as a support to George Sutton Titheradge and his wife at the Corinthian Theatre, Calcutta (1 November 1876), playing everything from Living at Ease to The Field of the Cloth of Gold. But, finally, Mrs T decided not to go and … well, Mr T solaced himself during the, what would have otherwise been the lonely, Calcutta nights, with Alma. 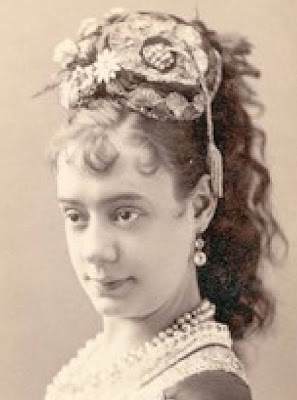 Madaline
In Calcutta, Alma developed into a leading lady, and she played second season (and Dora -- now Santon -- came too) for George Anderson at the Corinthian. Back in England she played at Manchester and Birmingham with Toole (and Madaline came too) before once more heading back to India. And Mr Titheradge, who’d been playing, in real life, the role of the man with two wives, came too. He would eventually allow his wife to divorce him, and he and Alma, having officialised their situation on 8 March 1884, remained together, producing a large clutch of children, until his death in 1916.
In 1879, the couple visited Australia, and over the years that followed, topped the bills in many of the best plays of the time, under the management of Arthur Garner – False Shame, David Garrick, Masks and Faces, The Divorce Case, Our Boys, The Moonstone, Neck or Nothing, Still Waters Run Deep, Pygmalion and Galatea, War to the Knife, Betsy, The Turn of the Tide, All the Glitters, Withered Leaves, School, Money, Old Soldiers, Milky White, as Eily now, no longer Anne Chute, in The Colleen Bawn, Diplomacy, The Professor, Coming Home, The Silver King …as well as starring above the title in a local version of Le Petit Duc … and I do believe I see Dora’s name in there too! Yes, Dora was along for the occasion.

Following their return from Australia, Alma was seen less and then little on the stage. Augusta, having spent time in South Africa, appears last to my theatrical eyes in The Ticket-of-leave Man at the Imperial Theatre in 1885, Dora in the country, in Little Lord Fauntleroy, in 1888. Madeline (sic) 'of Toole's Theatre' can be seen advertising, from Fulham, for guest appearancewith amateurs,  in 1886.