One Day in Guernsey (part 2)

The main roads done, the shopping streets, with their uncomfortable cobbles, zoomed through, I started taking some of the little stairways and tiny stone streets which run up the hill at every turn. Delicious stuff. Lovely little hidden-away houses and gardens, trees, rooftops – so many rooftops! I’m very fond of rooftops 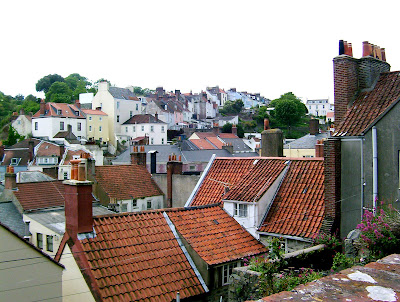 Surprise buildings, too. Here’s the St James’s Hall, an impressive hulk which was clearly once a church, and which has been converted to an auditorium et al 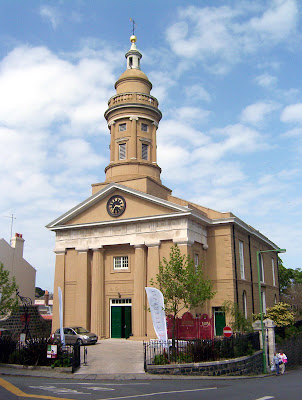 I passed another church, also past its churching days, with smashed stained-glass and boardings, which looked as if it were ready for its remake. Here, it seems, nothing worthwhile goes to waste.
But I can see why some of the town’s churches are being reconverted. There seem to be almost as many of them here as in a French town. And, in a way, this town reminded me most happily of some of the southern French villages I once knew. More, strangely, than those of Southern England. But then, I guess les iles anglaises de Normandie were originally French.

The guide book had gone on and on about the town’s culinary delights, so, as I weakened, I thought a little hot lunch might be nice. But I couldn’t find anything I liked. I didn’t want burgers and pizzas, thank you, I didn’t want a large waterfront tourist caff disguised as a resto, I wanted a nice little family restaurant where I could have a bowl of soup and a piece of fresh fish … and the only likely ones I came upon didn’t do lunch. In the end, at 3pm, I decided on a prettily situated, quiet place in La Plaiderie which advertised home-made soup. It was called La Pâtisserie which should have warned me. While other folk had coffee and lavish cream cakes, I put away some fair cauliflower and bacon soup, a würsteln dish, because I thought it might be warming, and two glasses of wine and realised I’d spent the same amount as I’d paid for my sea bass the night before. Lesson learned.

Slightly warmed, I set out on my feet again, accomplished a few more ruelles and escaliers, and passed a shining Boer War memorial which completely outdoes any other monument on the island – the Alberts and Victorias are nowhere in comparison -- and also just about any other war memorial I’ve ever seen. Look at this. It’s surely a candidate for one of those competitions where you have to invent a caption. What do you think he’s saying … 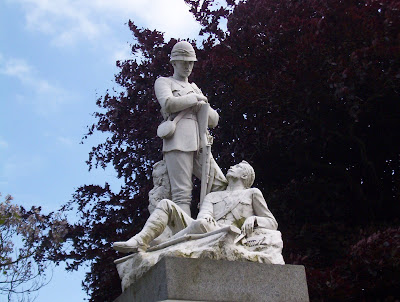 At four o’clock I gave up. My feet were tired and, though the sun had peeped through, that sea breeze was still biting my waist. I thought I’d given St Peter Port a fair going over, and so I headed for the wharf.
I’d chosen to return by the ‘slow’ ferry and I suppose I’d thought it would be an older less speedy version of the morning one. But , no! The Commodore Clipper is a proper ship! Carrying containers … I felt quite at home. Its also very comfortably set up indeed, with a delightful windowed verandah bar from where you can watch the whole trip in a way quite impossible on the Vitesse vessel. And, perhaps because it takes twice the time to make the trip, there were only a small number of people travelling. Delightful!
I sat in the window, with a succession of pints of warming local beer before me, and looked back on St Peter Port glistening in the late afternoon sunshine and looking far prettier than it had before. Then I watched the islands – Herm, Sark, Alderney, I presume -- go by as we rolled along at a comfy 13 knots across the waters and round the scenic coast of Jersey to St Helier. On this trip, too, I chatted to my first Guernsey folk. So friendly. I wonder how I – usually hyper-gregarious – had got through my time on the island without exchanging a word with anyone but a waitress. I guess because – and you’ll have guessed it from the way I’ve hardly talked about anything but architecture – I never really got into the place. 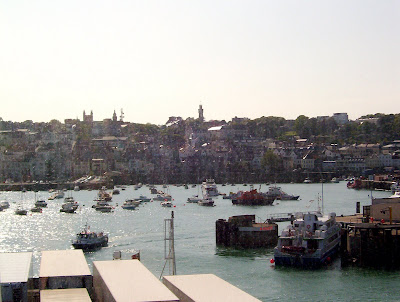 So, in a way, nothing became Guernsey so much as my leaving it. The trip back was the highlight of the day. And I promptly went to the ticket office and booked myself back on the same ship for my exit from Jersey, to Portsmouth, over the night of 31 May.

I think I need to give Guernsey a second and wider go next year. Even if it’s just to have another ride on the Commodore Clipper.
Posted by GEROLSTEIN at 2:20 AM