The Johnstons and the Greenes: from New Zealand to Muxton

Whenever I see a named New Zealandish photo from 150 years ago ... well, I just feel I have to investigate. I've picked up some odd jewels that way, and even restored one lonely gravestone as a result  ...  So, to day, when I saw Emily JOHNSTON photographed in 1869 in Wellington (my birth-town), I just had to dig a little. 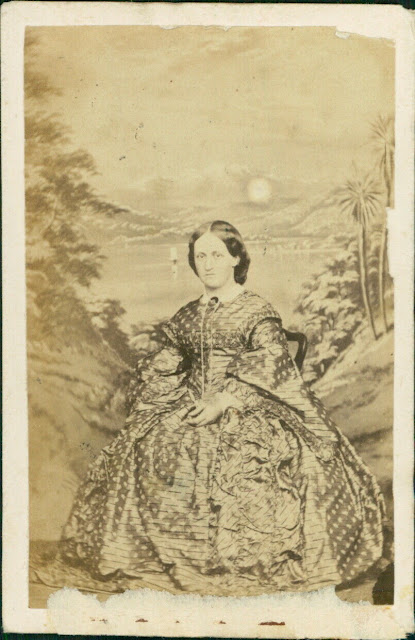 Is that supposed to be Wellington in the background? If it is, I was born on that bump on the left.
So, who is Emily, what is she?  Well, I can tell you. She was born, a clergyman's daughter, in Cambridgeshire England, as Emily Harriette ACLAND. By Rev Charles Acland ex Harriet Potter née SADD in 1838. I see the Rev Chas 'of Caius College Cambridge and Clifton, Somerset' wedding the daughter of Mr R Sadd, silversmith, of Cambridge 16 August 1832. And after he had been MA-ed posted to the living of Queenborough, Kent, but he decided, instead, to head east, and became a chaplain for the East India Company. He died aged 31, in India, leaving a widow and three children. Son Charles Lawford Acland (b 22 July 1833) went back home and followed the Rev trade. And I next spot mama Harriette and Emily sailing into (or around) New Zealand. It is 1856, and Emily is 18.
Well, to cut a long story short, Emily promptly did the sensible thing, under the cirumstances, and married. The Birmingham, UK, press (1857) reported the fact

Of Wanganui? OK.I missed that. So how long had he been 'of Wanganui'.
Alexander MRCS and Esquire. Ooh. Well, here he is 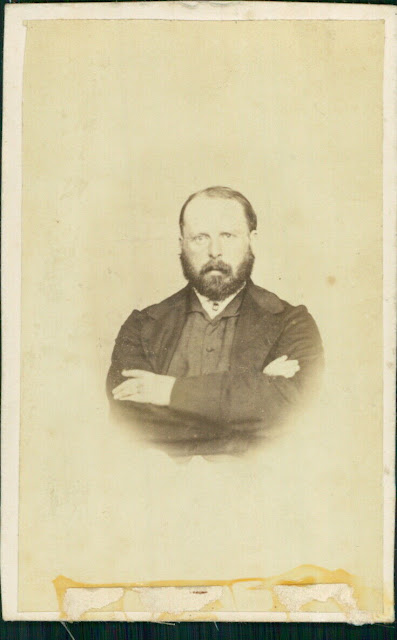 Born Birmingham, son of Thomas Johnston merchant from Scotland ... siblings Thomas, Anna, Sarah, Catherine ..  assistant surgeon to Thomas Newman in Winchcombe in 1851 ..  so when and why did he follow the exodus south?
Of course, it was the goldrush fifties ... but the family historians have a very odd take on the case. Maybe true, maybe not. He is debited as the father of an extra-marital daughter, whose mother fled Australiawards in 1854 ..
I first spot Alexander (MRCS) in Wellington in 1856. So by the time of this photo, he'd been there a while, and he'd father six children, of whom three daughters survived. And he became a pillar of society: provincial surgeon, coroner, head of the Colonial Hospital, Wellington health officer, chairman of the commitee of Medical Practicioners and others. He lived in a nine-room bungalow 'Goldie's Brae' in Grant Street (9 rooms, glass covered verandah, bathroom) and he and Emily and their three girls were 'in society'.
But in 1889 they sold up and went back to England. The family retired to Hyde Park Mansions where Alexander died in 1895, Emily in 1898 ... 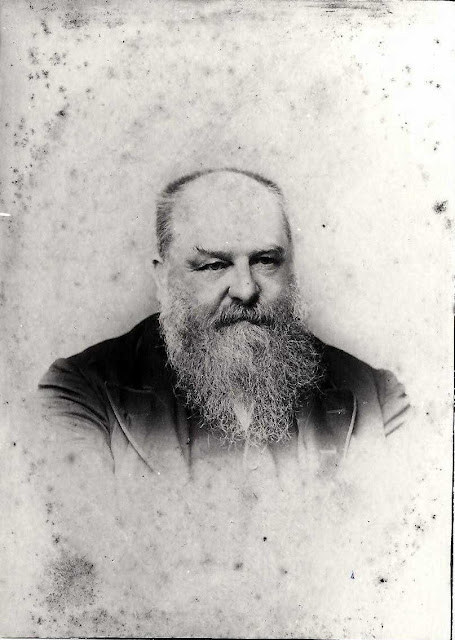 umarried daughters Maud Mary (d 15 July 1929) and Ethel Marion (d 29 May 1925) followed .... the only living brach on this tree is eldest sister Edith Emily. She married Edward Fuhrmann Clarke, returned to New Zealand, and there outlived them all, dying 12 June 1938.
Why do I insist on this? Because the verso of the photo reads 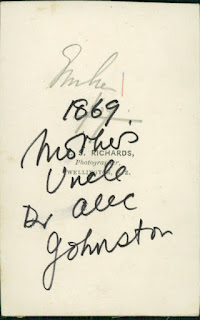 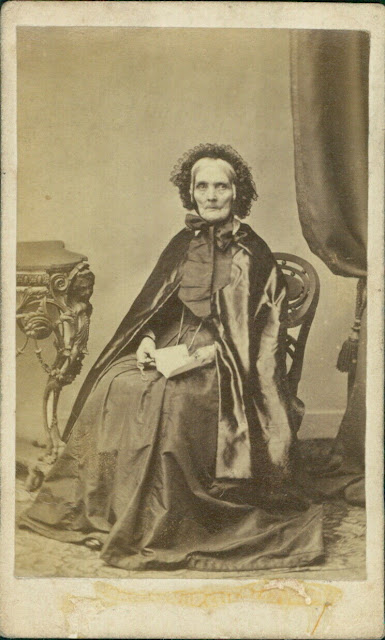 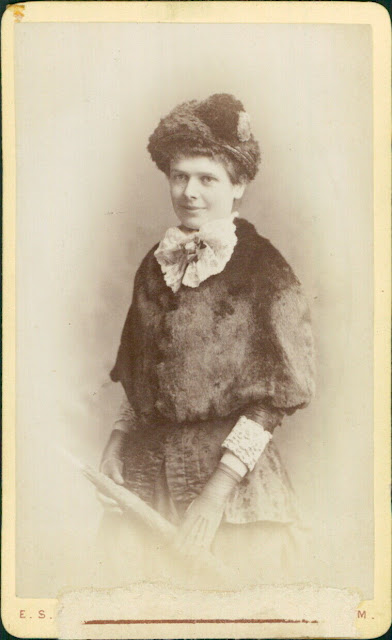 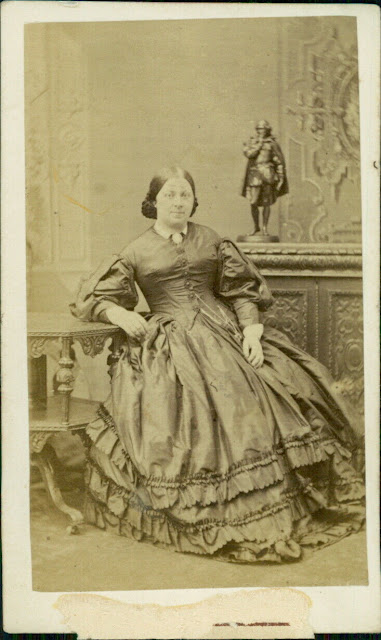 And, here we are, mother: Alice Greene. 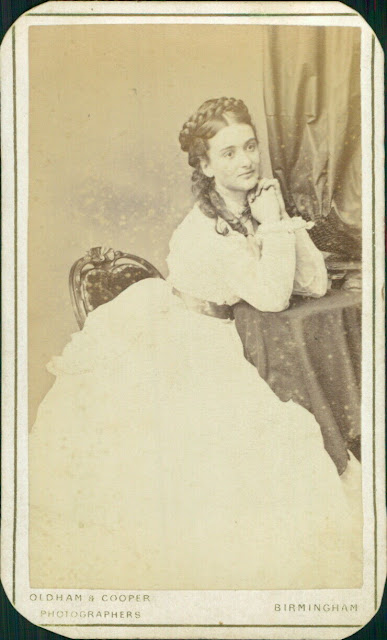 Mother's uncle John Johnston. Photo taken in Aberdeen. Hmmm ... which John is that? Aberdeen? Studying for medicine, then ..? Bit old for that .. 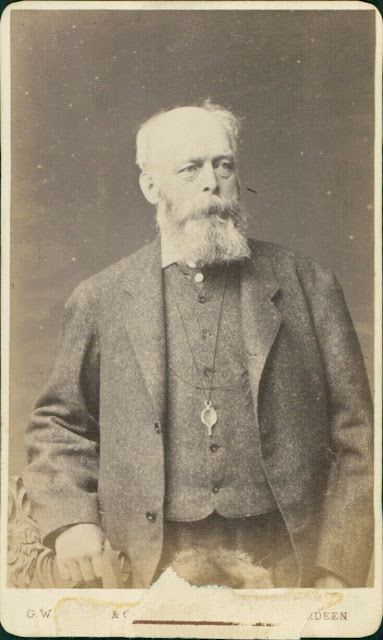 Mother's aunt Mary Johnston. Mrs Mary J, it must be, for the revelant aunt Mary died before the invention of photography. Or perhaps Mary (b 1848) daughter of Dr Charles (b 1812). Is that an aunt? 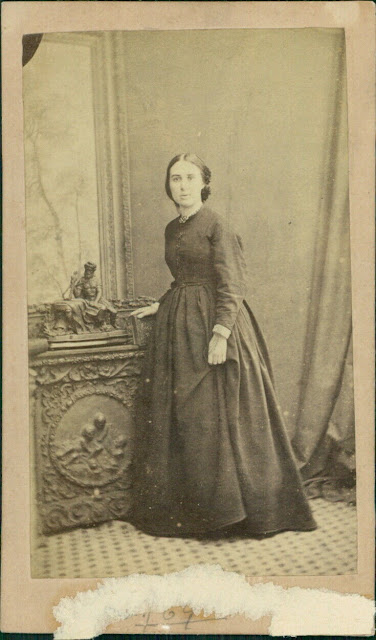 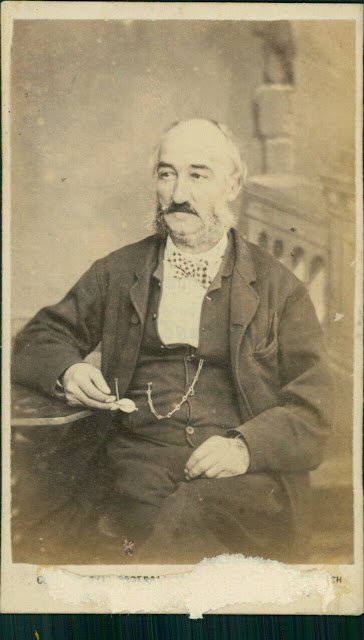 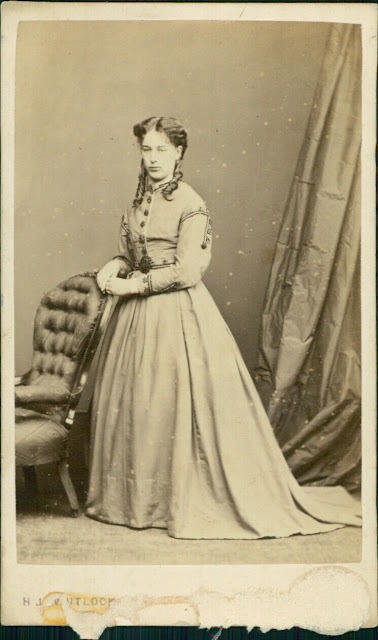 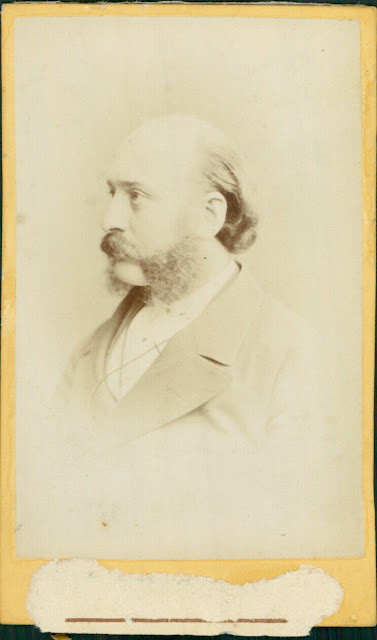 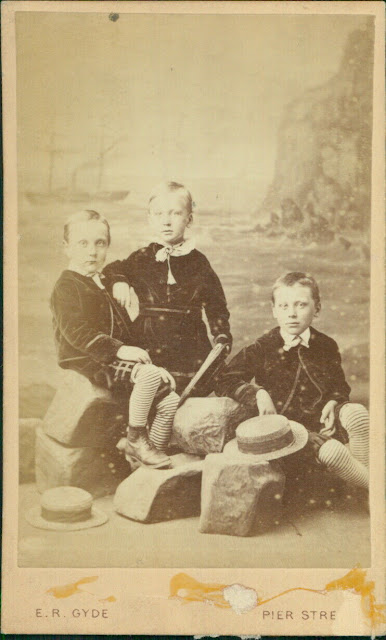 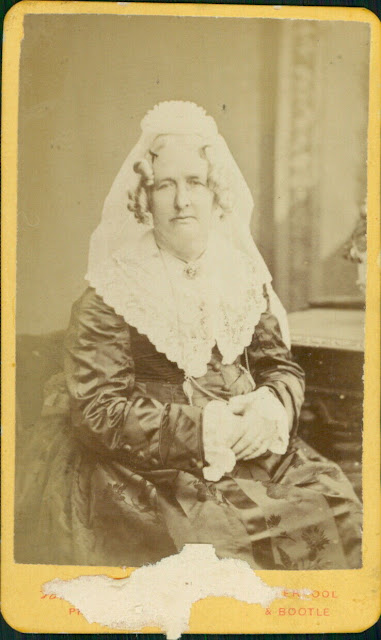 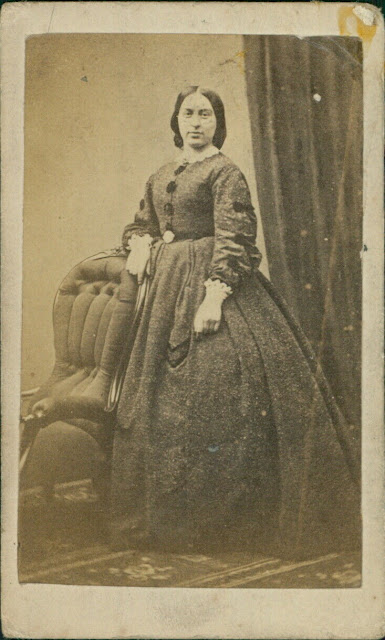 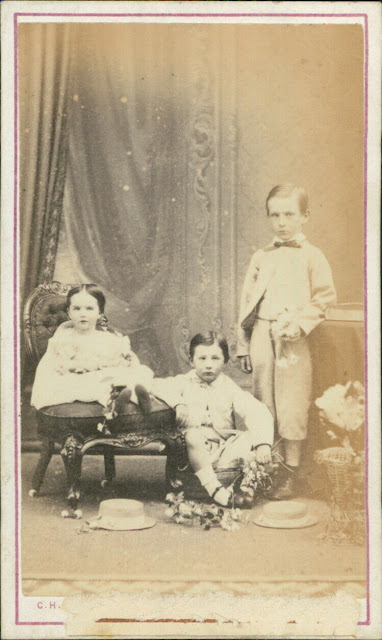 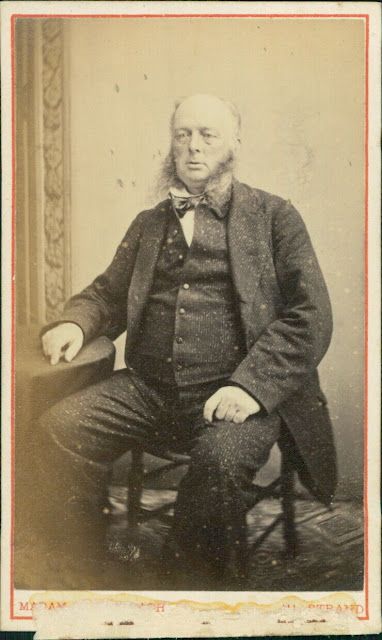 And another ... ah, this is the visitor. Oxford undergraduate. 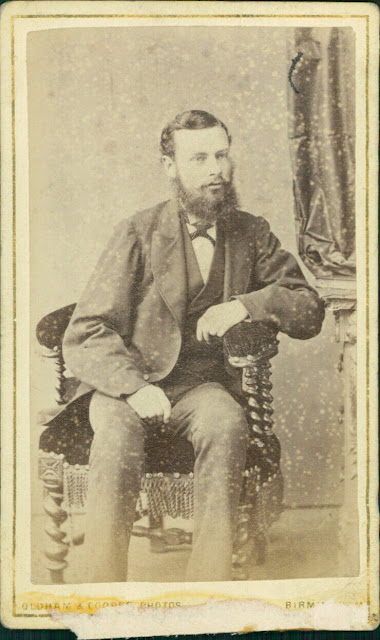 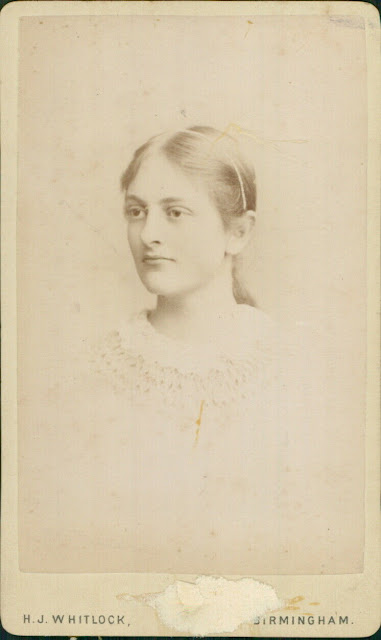 I've got a long way from Wellington, NZ. And there are more where these came from.
Well, the family we started into is that of Thomas Johnston (1785-1866) and his wife Elizabeth née Woodiwis. Married 1807. Amongst their children were a Dr George, a Dr James, a Dr Charles and, yes, our Dr Alexander. Now I just have to join up the dots ... and find out who our collector and her/his mother were!
Yayyy! Elizabeth Johnston (b Manchester 17 May 1809; d 1876), eldest daughter,  married Dr John GREENE! And here is the photo from the family tree of Mr William Wills ... 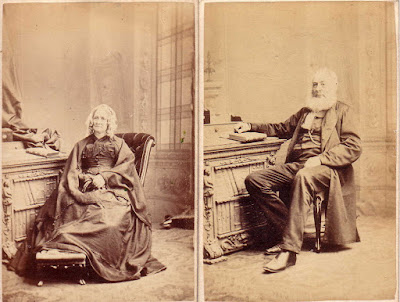 Yes, I reckon that is the Grandma Greene above? And the Dr John with the luxurious beard ...
They had a daughter, Catherine Greene (b Muxton, Shrops 1848) ... there she is in 1861, staying with her grandparents. Thomas (76) and Elizabeth (72) Johnstone 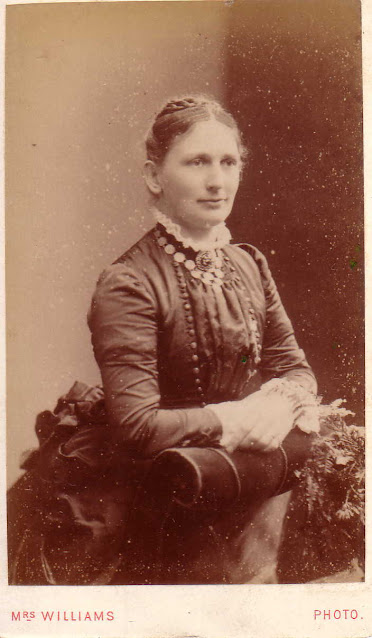 ... but ... Alice, where art thou?
And is someone using the term 'uncle' a little loosely?
Well, Dr John MRCS (from Brewood) and Eliza of Wrockwardine Wood, Shropshire show up in the 1861 census with an Anna (Auntie Annie?) 16, an Emily 14, a Sarah aged 10, an Alice 8 ... all born Lilleshall/Muxton, Staffs ... and whoa!!!!
we end up in 1871 in that same little village of Muxton. And here they all are!
John 62 surgeon MRCS born Brewood, wife Eliza from Manchester ... son-in-law David Lloyd Owen MRCS has married Annie, Sarah and Emily are still unwed, and 19 year-old Alice is the wife of iron merchant Richard James William BRINTON. 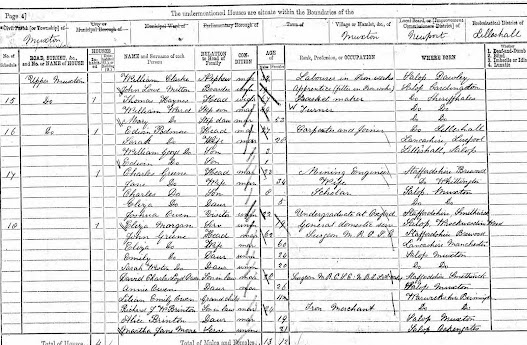 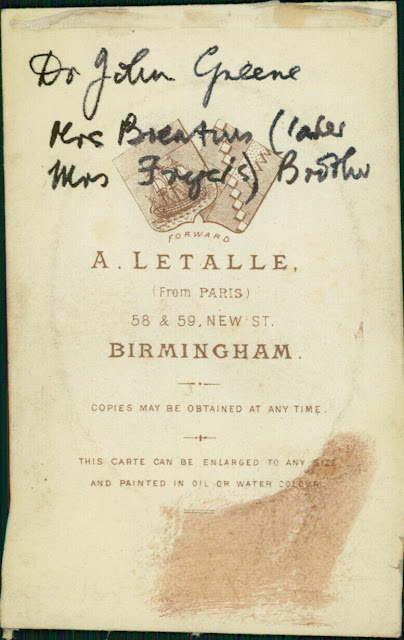 so, Alice Greene-Brinton-Fryer is the SISTER of the man with the whiskers? Daughter, I thought ..
Well, he witnesses her second marriage in 1882 ...

Yes. Alice had given birth to three sons, Richard Brinton (b Edgbaston 21 February 1872; d South Porcupine, Canada 16 December 1936), Charles Bannister Brinton (1873-1946) and Arthur Greene Brinton (b 1875 who became -- guess what -- an FRCS and opthalamist, d South Africa 1945). and then lost her husband (24 February 1881).  Her second husband did not last interminably, either. Henry Morse Fryer M.A. (b Bristol 8 November 1835) died 31 July 1897. Alice can be seen in the 1901 census, in King's Norton. Aged 49. With a daughter 17, named Alice Fryer (1883-1945) ...
Is she our inscriber?  She became Mrs James Cheston Gilbert, had a son James William Shenstone Gilbert ...
But enough. I don't think our bundle of photographs returned to England from Africa or Canada. So "mother" was probably penned by Charles or Alice.  Well after the event, of course. And now the bundle is to be broken up, after well over a century. Well, at least they will stay together here!
Even if I have gotten a weensy bit muddled here and there ...  it's a long way from Muxton to the Cape to Wellington to Ontario ..
And now turns up Herbert Johnston ... 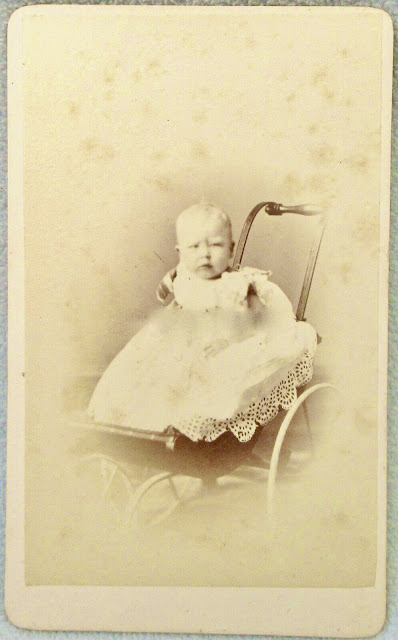 Whose Herbert are you?  In Nelson?