Whatever Happened to Baby May?

This morning a letter, rather than a photo, popped out of the pages of e-bay in front of me. It caught my eye because it seemed to be from a writer to an editor ...

Well, that's exactly what it is/was. But I had never heard of either of them, so I didn't rush it. I was wrong. The writer of the letter is memorable. I see odd ones of his letters in posh University Collections. So, today I have learned about Mr William Cox Bennett, "The author of some of the sweetest poetry that has ever been written about childhood" "Mr Bennett is rapidly earning for himself the title par excellence of the domestic poet of the day". Goodness! and yes, there he is splodged all over the www ... so I'll just sum him up.

William Cox Bennett (b Stockwell Street, Greenwich 14 October 1820; d Elliot Cottages, Blackheath 4 March 1895) was a son of Greenwich watchmaker John Bennett (1786-1828) and his wife Elizabeth Sinnock née Williams (1795-1864). After his father's early death, both he and his elder brother, John, went prematurely and successfully into the family business of gold and silver-smithing, jewellery and watchmaking, operating out of John's home at 65 Cheapside. Neither brother would spend his life there. John went on to become Sir John, sherrif of London etc etc. William, like thousands of other Victorians, wrote verse. There are lists of his volumes, of varying accuracy, on the web. After a dozen years of scribbling, however, he hit the gold with a poem about his little daughter, May ... 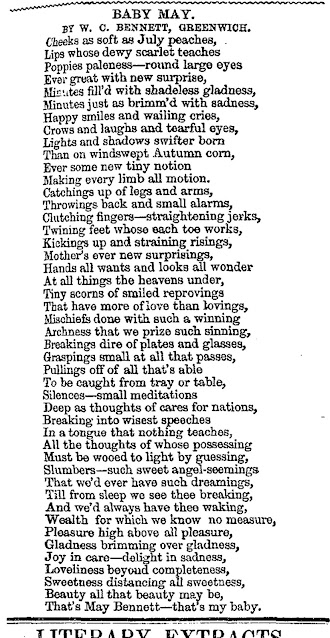 'Baby May' went round the country and its magazines, journals et al. and William's reputation as a 'homely' poet was established. Then, a year or so later, he came up with another winner ...

By the 1861 census he was describing himself as 'watchmaker and poet', and by 1871 (having compounded with his creditors a few years earlier) he was no longer a watchmaker, but 'author'.

Bennett was not wholly a writer of sentimental domestic poetry: he tried his hand at all sorts .. 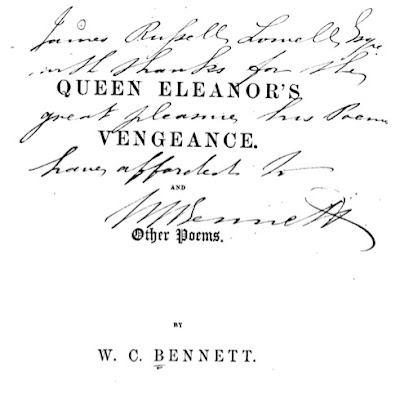 but it was 'Baby May' and 'The Worn Wedding Ring' which had been, and which remained his most popular pieces, through many and many a reprint, right up to today's 'scanned books'.

So now, our letter. Here is Bennett replying to an 1883 request from an editor to use 'The Worn Wedding Ring' in an anthology. Still from 65 Cheapside, and not missing the chance to get a few other pomes into said anthology! 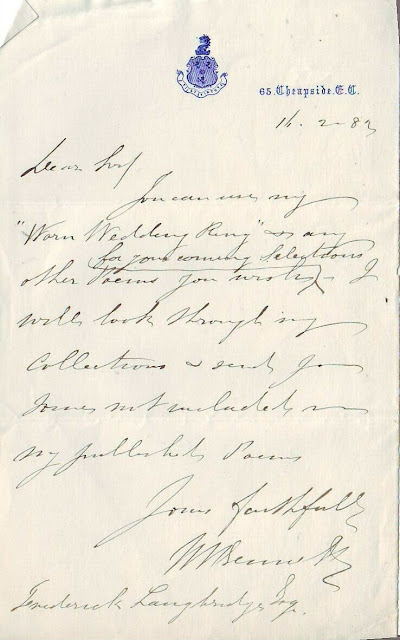 The addressee of the letter is another spare time (and lots of it) poet, Rev Canon Frederick Langbridge, forty years rector of St Johns, Limerick. Apparently he was partially responsible for adapting A Tale of Two Cities for the stage as The Only Way.

Of course, what folk really want to know is 'whatever happened to Baby May?' Like Christopher Robin, she had to live with the burden of being a baby heroine. Well, I dug into the Bennett family: William C, his wife Emma Sophia née Wright (b 20 August 1821; d 1886) and their eight children. Well, eight were born, but only three had a long life. Harold died in 1869 aged 20, Norman died in 1880 aged 21, Ellen Emma got to 33 (d 1 January 1900), William George and Kate seem to vanish early on ... but May, her sister Mary Agnes and brother Bertram survived to marriage and ..

Mary Agnes married Alfred G Spencer, son of George Spencer of Blackheath. Alfred was an indiarubber manufacturer, and he manufactured to such advantage that when Mary died 12 October 1945 at Collingham Gardens, she left a fine fortune of fifty-three thousand pounds. The Spencers had no offspring, so it was Mary's nephew who executed her will. May's son.

'Baby May' (born Greenwich 19 May 1846; d Bath 7 September 1938) married Henry Charles Ellis, 'son of Charles Ellis JP of Sheal Court, Maidstone' (27 March 1878) and they had a series of children: Elsie Maud, Daisy, Charles Harold, Bernard George ...  Bernard George (b 21 November 1890; d Letchworth 1 July 1979), educated at Bertram's school in Paignton, made himself a name in the Great War in which he was awarded the George Cross. He was the accountant who executed Mary's will,

Charles Harold Ellis (b Maidstone 22 January or February 1886) the elder brother was a solicitor. I see him in 1939, still in Maidstone, with a wife Mabel Agnes née Stapleton, and a son Noel (b 23 December 1922) 'student of ballet dancing'. He died there, at Willington House, 19 December 1951.

Elsie Maud is living, unmarried, with the Spencers in 1911, Daisy seems to have become a solicitor's short-hand writer ...

Garn, I've got carried away by Baby May when I was supposed to be looking in to W C Bennett. 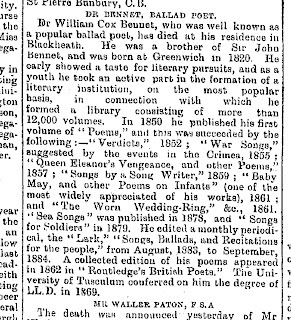 Anway, the letter is vastly collectible, and its going for 35$NZ on e-bay so anyone who is interested its at https://www.ebay.com/itm/65-CHEAPSIDE-1883-UK-ANTIQUE-AUTOGRAPH/133622697550?hash=item1f1c888e4e:g:dKMAAOSw6zlfeHcL. which happens to be the site of a splendid Irish vendor with heaps of Irish photos ... alas, most with no clue as to of whom and/or when. Anyway, thank you "andrewiss" for leading me to this. And I'm spending New Year's Eve browsing your excellent stock!

Posted by GEROLSTEIN at 9:02 PM

Lovely to see Canon Langbridge mentioned, together with 'The Only Way'.

In 1922 the canon's eldest daughter, Gladys, became the second wife of barrister Alfred Tapling who was born in Wrawby, Lincs, and they moved to live in 'Wrawby House', Park Road, in Wivenhoe, Essex. A few yards away from 'Rutland Cottage' where my great-grandfather, Fred Harvey, had lived ten years before. And where his wife, Harriet, died in an asthma attack in 1910.

By a very strange quirk of fate, this was the village where John Martin Harvey - who commissioned Langbridge and Wills to write 'The Only Way' - was born. John Martin Harvey was my great-grandfather's uncle (although younger than him...) and they grew up in the same family as 'brothers'.

Wandering around the Old Cemetery in Wivenhoe, looking at my Harvey ancestors' graves, I was amazed to find the Langbridges buried a few yards from the grave shared by my great-grandmother and John Martin-Harvey's grandmother. Up to that point I had no idea they had connections to Wivenhoe.