I was chasing a nice photograph through the items in the e-bay shop of 'wewunyan', when I stopped short at another old document. 1854. Administration papers of ... oh no! Eliza Ann Smith. Not getting into Smiths. But I peeped inside and ... oh well, why not have a crack.

Eliza Ann died in a place named Yatton Keynell. No, I didn't know where it was, either. She was 46, a spinster, she hadn't made a will, and her brother Andrew had applied for jurisdiction over her estate of a not negligible 600L. If she had six hundred livres to her name, odd that she hadn't made a will. 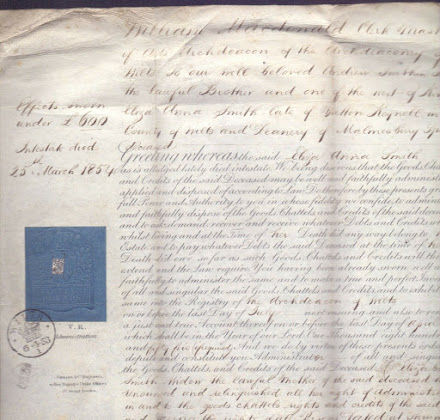 Well, I thought, Yatton Keynell, Wilts can't be that big a place. I'll go for a wander up there and see if I can spot Eliza Ann. Easy! There she is (b 1808), with brother Frederick (b 1806), living at a place named Grove Farm (75 acres), and a house servant. Brother Andrew (b Bitton, Gloucs 1811) is across in Church Yatton, with mother Elizabeth (b 1776) and sister Keren (b Bristol 1812), where they have a 75 acre farm employing five men: so it looks as though their money comes from the soil.

Well, I thought, if all those Smiths were farming Yatton Keynell in 1851, maybe they will be in 1861. No. The reason that Andrew, rather than Frederick looked after Liza's 600 was the Frederick himself had died -- intestate! -- and been buried 5 October 1853. And Andrew [Swithin] Smith had followed in 1857. Mother, too, has got lost somewhere along the way .. 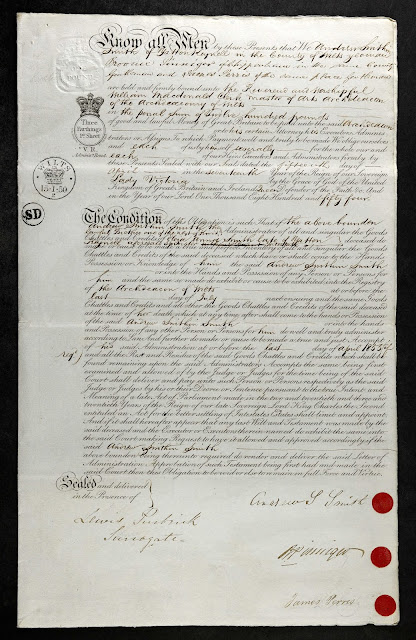 Only Keren and another brother, John, remain to execute Andrew's will, and to farm 150 acres next to the Bell Inn. (The Bell Inn is still there today, the farm, doubtless, isn't).

There seem to be a good few documents in National and Wiltshire archives in which the Smith family get a mention. I think they may have been, originally, larger landholders ... I have unearthed the will of Thomas Smith, husband of Elizabeth née Newman (m 13 February 1794), I have unearthed a bundle of baptisms of what seem to have been their locally-born children --  Mary (1795), Thomas (7 February 1797), John (7 February 1799), George (1800), Edward William Sidney (1803), Amelia Sophia (1809) -- but, most significantly I have found the four-page-long testament of Thomas. Its enshrined in the Canterbury archive, and it is very shoddily written in that awful legal-churchy scribal writing, but I picked the names of his wife (Elizabeth) and children therefrom. Those that get into the list are: George, Thomas, Edward, Mary, Emma, John, Edward-William-Sidney, Frederick, Eliza Anna, an as yet unnamed infant daughter, and those not yet born. Thomas was clearly not preparing to clock out just yet! 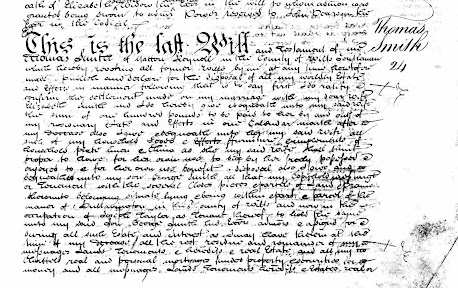 The will shows traces of former position. He is dubbed, here, 'gentleman', there is reference to a prenuptial agreement with his wife's family, one of the executors is Mr Elver Newman (d 1833) of Castle Combe, there is mention of his 'copyhold lands in Hullavington' ... and there is a heap of hurlyburly about the eventual exclusion of one son ... maybe it was the Newmans who had the money. Anyway, the will was proved 16 May 1813 and the Smith estates seem thereafter have been split up .. 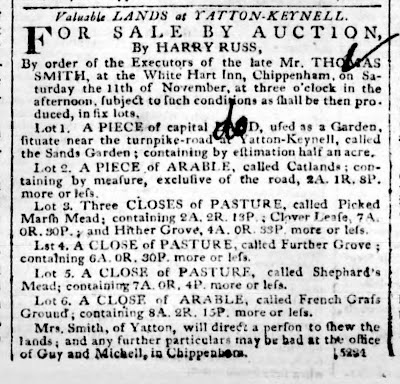 Mrs Smith was promptly downsizing.
Well, Frederick, Eliza Anne and Andrew we have already followed to their grave. Which I would imagine is at this pretty church in Yatton Keynell ... and I wouldn't be surprised to find others there as well... 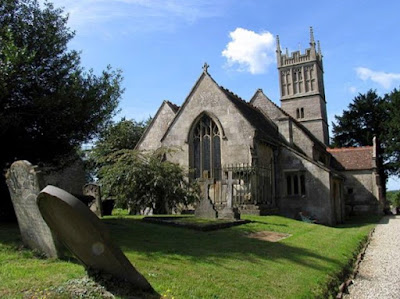 The others? George, Thomas, Edward, Mary, Emma, John, Edward-William-Sidney, and the 'as yet un-named' Amelia Sophia of the will, and the later Keren?
Ken was the last survivor, and she lived and died (30 October 1889) in Yatton. There is a window dedicated to her in the church above: 'Kerenhappuch Smith'. Sigh, the bible is responsible for some horrid things! In 1861, as we have seen, she and brother John are still farming 150 acres next to the Bell Inn, while one Henry Ferris has taken on Grove Farm; by 1871 John is gone and Keren has cut down to 10 acres with one man to work it, in 1881 she is still alongside the Bell Inn ...

And, goodness! At her death a huge sale! Some of the paddocks listed in previous auctions clearly didn't get sold .. three-quarters-of-a-century later they are still in the Smith family. No wonder Miss Smith could afford a church window: just add up the annual income from rents!

But there seems to be no Smith family left. Only one of the Smiths whom I have followed seems to have married, that I can find, although ...
It seems that George Smith went off to Lyncombe Vale, Bath to be a gentleman. He died in 1852. I'm sure its he, for he refers in his will to his godchildren Elver Newman son of George Newman, James George Newman son of William Beard Newman (d 1841) ... and says he is 'of Yatton Keynell'. He also leaves his fortune to Edwin, Eliza and Ellen Barrow. Funny: in 1851 they are calling themselves 'Smith' and all living together.
It was the young Amelia Sophia who married (1838) William Parker, yeoman, son of a basketmaker, from down the road at Folly Farm, Corsham ... Thomas and Keren were the witnesses .... she died 11 March 1884 at the same Biddeston where the earlier Smiths had once lived. She left a daughter (b 1844) of the same name who died, in her turn, 31 May 1935 ... a spinster. 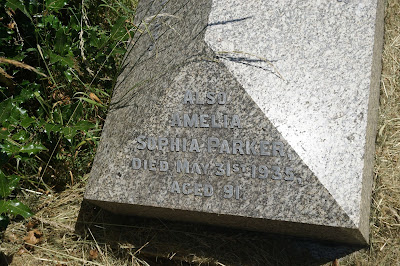 That numerous Smith family seems to have just faded away. I can't find a single one who made it to the 20th century.

Sigh. I did pretty well to find 'John Smith'. But Mary Smith? No. And those Edwards?  And where is Yatton Keynell in the 1841 census ...  not wholly a success!  But maybe someone in said village will wander up the the local church and ferret in the gravestones ...

A very strange story. A whole family, gone from wealth to what seems like extinction in just one generation ... 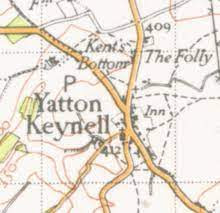 I see, in 1891, Keren's 'Street Farm' is empty. Mr Walter J Robinson is at 'Manor Farm', the blacksmithing Hulands are still there, as are the farming postmen, the Cleverleys. John Tanner is firmly settled at Grove Farm, William Pavy is at Folly Farm, William E Beint 'carpenter and wheelwright' still has the house with the chapel. 79 year-old William Kimber 'retired gardener and agriculturist' is still in one of the Kent's Bottom cottages, Isaac Fry, agricultural labourer as well. The Manor Farm is being farmed by a family seemingly named Eels. The streets have names nowadays, but the census taker has punctiliously filled in the neams of the properties as well. I wonder who has the freeholds now ... Menor Farm (213 acres) and others were offered for sale at various times ... but all these folk were renting ..

Here's a photo of the village in 1910 from https://www.postcardsthenandnow.com/2013/10/yatton-keynell-wiltshire-c1910.html 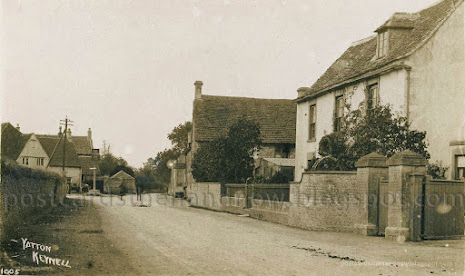 And here's another, slightly earlier 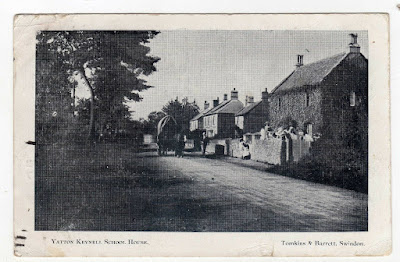