Victorian Charity or, an expensive night on the Welsh tiles

If I were still collecting wonderful pieces of Victorian ephemera, I would have my hand in my pocket today. 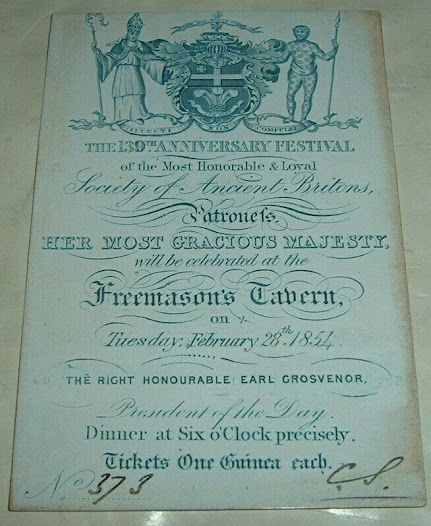 The Most Honourable and Loyal Society of Ancient Britons, founded in 1715,  was one of those 'charitable' groups of wealthy and sociable gentlemen who got together, annually, for a 'Festival', ie an extravagant dinner, liberally laced with best of wines, a concert, lots of cheerfully self-congratulatory speeches (with toasts), and who paid largely (and well-publicisedly) for the 'charitable' pleasure.

The Ancient Brits were however a bit different to the Guild of Girdlemakers and other such 'Festivallers' and City Diners, in that they were what would now be doubtless dubbed 'racist', and which I prefer to call 'geographically circumscribed'. Their charity extended only the wandered children of Wales: Welshfolk who had left Wales for London, and there found poverty. The Ancient Brits founded a free school for the children of these foolish unfortunates, and their annual beanfast produced the wherewithal to house them and/or sponsor their education.

However, there was a little more to it than that. A scholar has adeptly described '[it] was a complex and multi-faceted patriotic phenomenon. It was simultaneously a mouthpiece for royalist propaganda and a haven for political radicals, a piously charitable foundation and an excuse for having a good time. In a period when distinctly Welsh institutions had largely ceased to exist, the Society’s annual celebration of St. David’s Day in the English capital offered a rare example of eighteenth-century Welsh people deliberately imagining into existence an identifiably Welsh nation, using ceremony, sociability, poetry, and politics to fill the institutional void'. 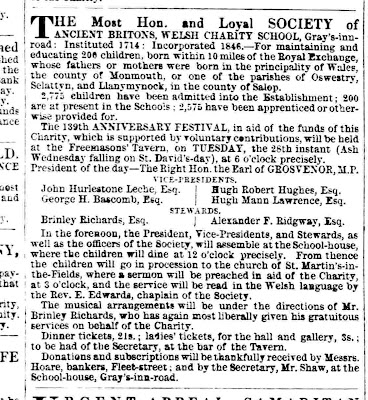 So, our ticket is for the 139th annual, at London's most popular venue for such events, the Freemason's Tavern, in 1854. These 'Festivals' were often reported in huge detail, with all the notable names, and toasts, and answers to toasts listed and described. We are actually rather lucky in that, in 1854, the Welsh paper's shorthand-writer 'had an accident' so the spoken part of the proceedings could not be (shame!) reported verbatim, but they did their best ...

Of course, my interest in the proceedings turns towards the music, and Brinley Richards had gathered a fine group of colleagues for the occasion, headed by the top-notch English soprano, Sophia Messent, the Ransfords -- father Edwin ('I'm a jolly gipsy king, ho! ho!') with his characteristic old-fashioned ballads and character songs, and his talented daughter, Mary Ann, plus the singer-songwriter W T Wrighton. Of course, a harpist was a must, and John Cheshire was one of the best in the kingdoms. But none of them was Welsh.
Lucy Williams was indeed Welsh. She even called herself 'the Welsh Nightingale'. I have told her story in another post https://kurtofgerolstein.blogspot.com/2019/10/the-welsh-nightingale-miss-lucy-williams.html. However, to put her up alongside Sophia Messent was, well, a bit like teaming Gwynneth Jones with Kathryn Jenkins. But look who got the review! Lucy, even at this early stage of her career, knew her audiences!
Sounds like a good time was had by all, the 200 deprived children were funded for another year, Earl Grosvenor MP, the evening's 'host', got his name credited as giving as much money as the Queen (100 guineas) to the cause -- he wouldn't dare give more! -- and everyone was happy. Except the poor short-hand writer?
PS Sophia Messent can be found here https://kurtofgerolstein.blogspot.com/2019/08/little-treasures-of-musical-history.html

Posted by GEROLSTEIN at 7:33 PM