A little wander this morning into the world's abandoned photos. Just a little one, before I turn my attention to things theatrical .. three photos .. and see if, just for once, I can pick a trio with no attachment to the Indian army, Debrett, country mansions .... just three nice young people ... two from London, and one from Shaw, in Lancashire ... 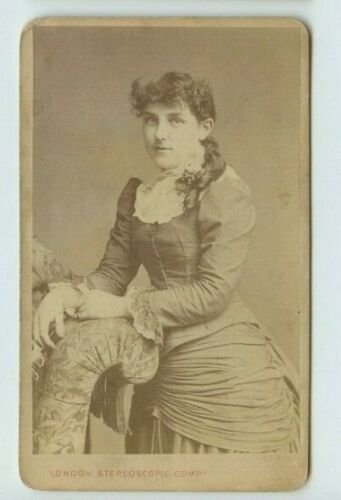 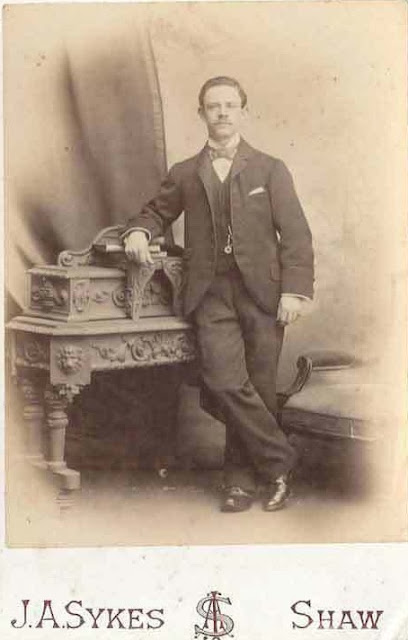 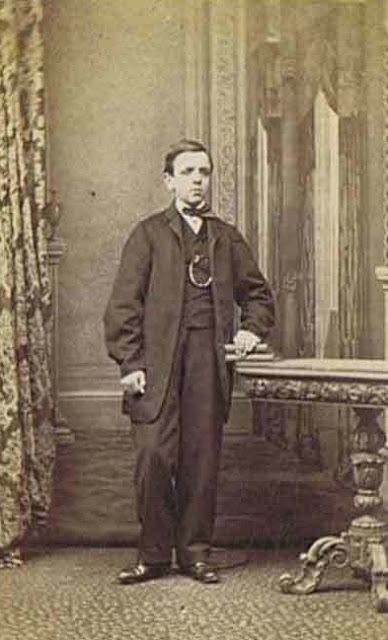 Let's start with the lady. 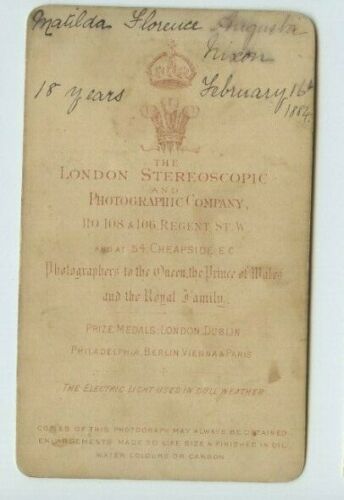 Well! Couldn't make it easier than that! And here she is. Her eighteenth birthday photograph.

Matilda was married in 1890 (1 November). Her husband, Samuel Sheppard, was in the fish business. Not catching it, but seemingly doing the book work connected with it after it had been caught. In 1891, the young couple can be seen sharing a home with the newly-widowed Mrs Nixon, and sisters Kate and Emma. Herbert had died in 1888, and George had scarpered to Oklahoma. When he enlisted in the Great War he chopped a couple of years off his age, said he was a tractor driver for Mrs Bixby Bryant in California, and gave unmarried sister Blanche as his next of kin. I see him in 1940, still single, now a carpenter, in Maryville, Cal ... he died 30 December 1940.

Back in Hackney, Sam continued his career in fish, and Matilda produced children: Douglas Samuel (1891-1915), Kathleen Florence (1892), Percy Howard (b Hackney 2 February 1897). They lost Douglas, I have lost Kate, and the couple can be seen, 'retired fish salesman', living in Romford in 1939. Percy is up in Skipton, York, as a police constable.

Well, I wanted 'ordinary' and that's what I got. Still a few "I wonder"s in there. Why did teenaged George rush off to America? What happened to young Douglas? Ah well. I wonder who sold this photo. It seems to be a single...

On to the next. Smart looking wee chappie from Lancashire. Granddad Taylor, born 17.3.1872 says the verso. Then a 'Dennis' is added. Yep. All good.

Dennis Taylor, born Rochdale. Son of Daniel Taylor, cotton weaver/loom jobber/etc (d 1909) and his wife Alice née Mills. Mills by name and by trade: the whole family was -- like so many folk in the area -- involved in spinning, weaving and associated trades. Daniel and Alice (m 11 February 1861) had a daughter, Elizabeth Ann, lost a little Frank, and then nine years later, another son: our 'Grandfather Dennis'. And guess, what here the four of them are! 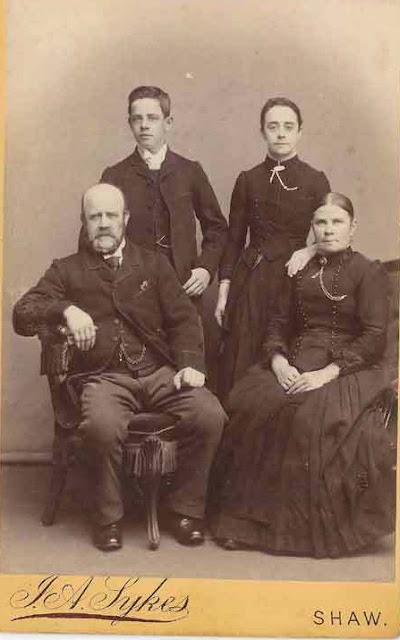 Well, father, mother and Elizabeth all stuck with stuff. Elizabeth married a fustian cutter, from Shaw, by name John William Smith and had Wilfred, Arnold, Eveline (1879-1970) and Clifford (1902-1923), all of whom, again, seem to have followed their parents profession. But Dennis got out.

In the 1901 census, he has become a (married) tobacconist, by 1911 he is a greengrocer in Glodwick Rd, Oldham .. His wife was Sarah Alice Sutcliffe, their children Alfred, Hilda, Norman and Dora. How am I going to track them? Which of the four was the parent of whoever wrote 'grandfather' on these cards. Since that person wrote 'Grandfather Taylor', I have a suspicion it may be a child of Hilda or Dora. Did they marry?

First clue. Family grave in the cemetery at Crompton on a plot bought by Daniel at the death of his Alice .. 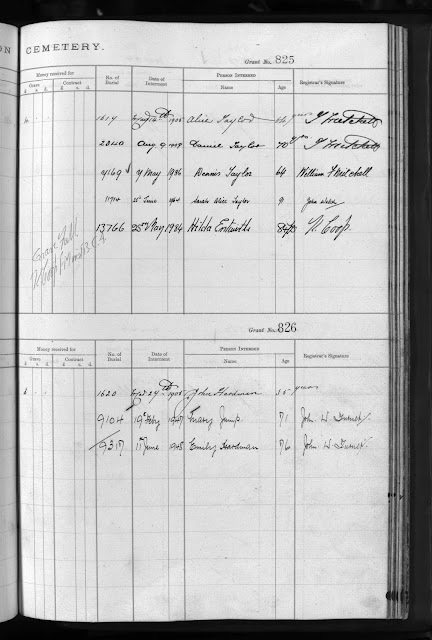 In that plot are interred Daniel and Alice, Dennis (1936) and Sarah Alice (1964) and Hilda Entwistle (1984). I hope the grave is well-tended. Who lives round Crompton?

And lastly, O J Bowles 1866. Yes, a bit earlier than the other two. He looks like a wee laddie in his first suit. Going for his first day at work as a clerk in some sort of an office. Well, he was actually a whole twenty years old.

Occy was indeed an eighth son. However, Caroline's practically-permanent pregnant married life of 24 years, before not she, but her undoubtedly exhausted husband sank under the weight at 49 years of age, included 3 Carolines and two Alfreds ... in the 1841 census they have only Elizabeth (12), Henry (4) and Alfred (0) at home ..

Anyway, Caroline took over the business at her husband's death, and we see her at 188 High Holborn in 1851 with Elizabeth and Charles helping in the business, plus Henry, William, Frederick, Occy, Caroline and Thomas. Thomas would die that same year. Productivity was evidently not equal to edurance in the Bowles family. Oh! James is next door with wife and just-born son. So that makes nine survivors.

I am awfully tempted to chase up some of those other Bowles, but there must be millions of descendants out there ...
5.30pm. End of working day. Muggy eveninng. Iced rosé in order .... and tomorrow is Monday when I am going to see my wee trotting filly do her stuff .. and less happily, face up to the unsympathetic Australian tax department. Rosé, definitely!
Hey! I got my three 'ordinary people'!!!!!