The vicar, the lawyer, the wine merchant, the bank manager ... and the actress!

I'm getting quite adept at picking out the odd jewel from the vast mines of ebay.  So, to start off 2021, after a jolly foray to the early-morning market ... farm-fresh veg and artisanal cheese, rose bushes ... and a thorough soaking of the gasping garden, I made my lucky dip. Today I happed on the shop of 'feldonstamps', and picked out some photos and two letters from a collection focusing mainly on postmarks and postal history ...

Here are the photos. Three nice gentlemen who looked as if they might have been in the law (Mr Feld has many many documents etc from law firms) or business or something else requiring a white collar... 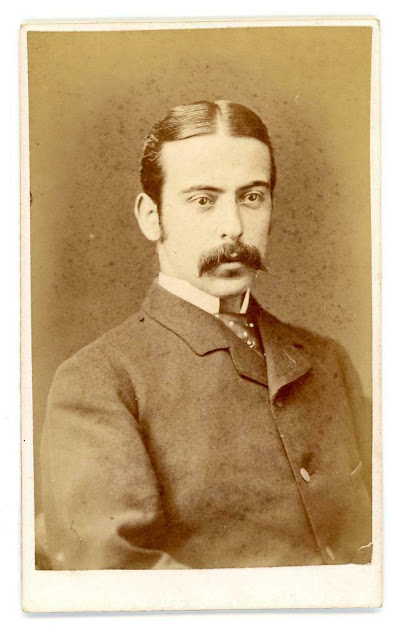 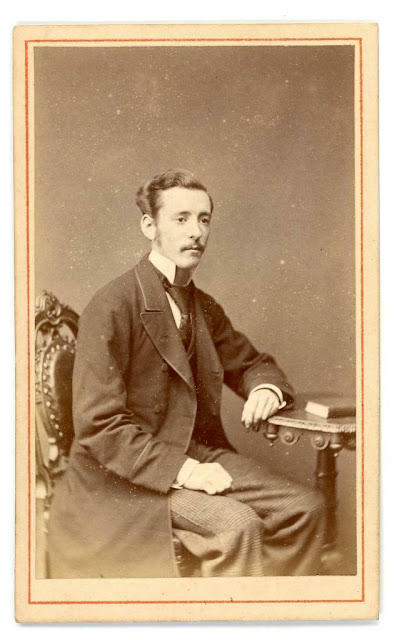 and two photos of this chappie: one from Exeter and the other from France. 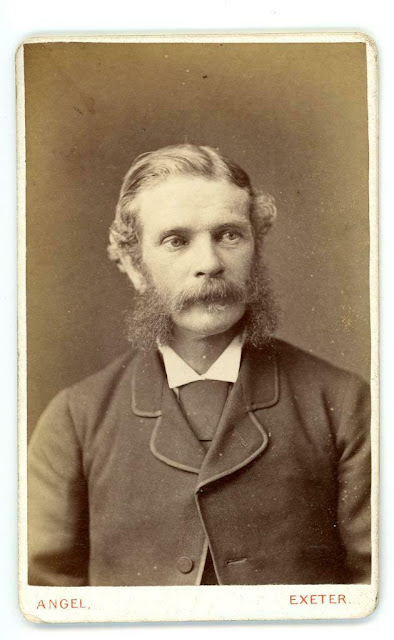 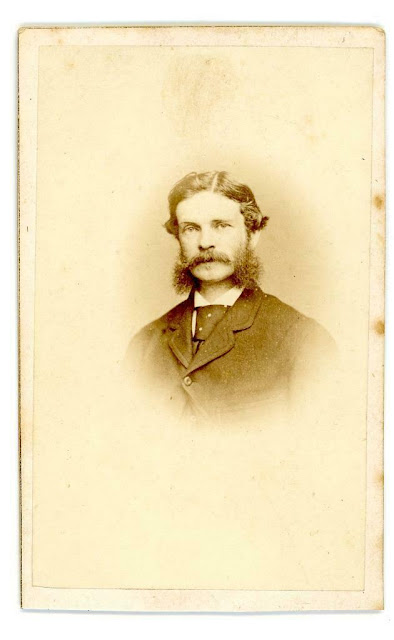 All are named (1) is Walter R Elliott (2) is Charles Drewe Harris and (3a/b) is Constantine Richards.
So .. here we go.
Walter Robert ELLIOTT (b Kingsbridge, Devon 1851) was the son of doctor (MRCS, general practicioner) John Elliott (1808-1873) and his wife Mary née Luscombe (1809-1896). In the 1861 census, he is listed the ninth of their ten children (there were apparently eleven, so one must have been away), the first three having been launched on Devon as doctors, chemist et al. Walter, however, became an accountant. He married Harriott Augusta Heather, a notary's daughter from Portsea, rose ultimately to a position as a bank manager in Dartmouth, and quit this life at Roudham View, Paignton 21 January 1908. There were no children, but he left Harriott well provided. I see that in 1911 she was looked after by a cook, a housemaid and a parlour maid ...
Charles Drewe HARRIS (b Harfield nr Bristol x 28 April 1853) was the fourth child (of five) of solicitor Charles Harris and his wife Emma Eliza nee Drewe. Eldest brother Alfred followed in father's footsteps, but the teenaged Charles became a clerk to a wine merchant, then a wine merchant on his own account and 'manager to a whisky merchant'. He married (17 November 1880) Harriet Agnes Tomlin Harris, daughter of Stanley Harris, solicitor ... a cousin, by whom he had a daughter Stephanie Drewe Harris (d 1904 aged 23) and a son Oscar Drewe Harris (b 15 March 1884; d 1975) ... and in the 1891 census they are equipped with a housemaid, a cook, and a French governess at their home in Hampstead's Wood End Lane. Charles appears to have died in 1928, and Harriet the following year (33 Victoria Road, Sutton 30 October 1929). Her executor was her son Oscar 'theatre manager'. Wot! He didnt have much to execute. She left but a few hundred pounds.
Here we are, Mr Oscar D Harris ('Odee') 'well-known in the West End as manager of André Charlot's revues at the Prince of Wales'. Well, fancy that! In 1932 he recoverted into a publican at the Northey Arms, Box. Oh heavens! He was the husband of Maisie Gay! Maisie died in 1945, Oscar lived thirty years more. Mr Maisie Gay, indeed! Was she then 'Daisy Maude Harris'? Yes, she was. There they are living together in London in 1927 ... can't find the actual wedding, but never mind. Look! Here they are with Jessie Matthews ..  So Charles Drewe Harris has his moment of glory. Maisie Gay's father-in-law! 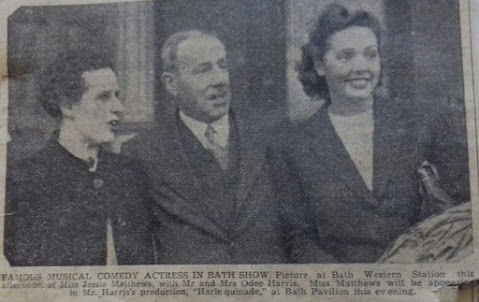 Constantine RICHARDS utter blank. Why? Was he perhaps a Frenchman who just visited England? Oh, well, can't win 'em all.
STOP PRESS. Its not "Richards" its "Rickards". And his wife Jane née Arden (m 1869) was there too, but someone has snapped 'em up since yesterday. Son of William Rickards and Jane Damian. Died Oaxaca de Juárez, Mexico, 19 February 1905. Wonder why he was there. I see they had several sons down there. Oh! 'Ya en 1873 habitaban en Oaxaca los ingleses Constantino Rickards (minero)'. 'Don Constantino Rickards, a most generous and hospitable Englishman, who has lived in the country thirty years', He or his son seems to have been an archeologist! And is it he or his son who is one of 'the state's most important businessmen'.  British consul. Thrre generations of consuls? Too much. Another story!
STOP STOP PRESS. Hehe it was my secret agent and ally who bought them. All's well. Here's 'Juana' née Arden! 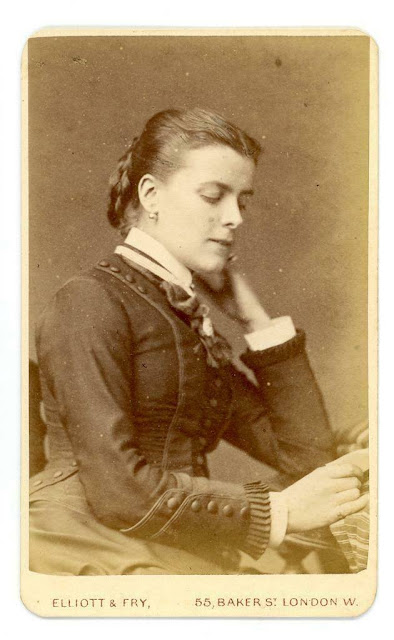 Now the letters. 1851. This first is actually only an envelope. Addressed to Edward Lorence Gibbs, solicitor, at Henley-in-Arden. Don't know why I picked it, but thought I might as well look him up. 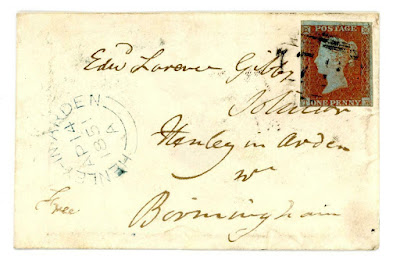 Edward Lawrence GIBBS born 1804. Son of Lawrence Gibbs (b Bethnal Green x 24 January 1768; d 13 July 1820) and his wife Sarah née Sturmey (d Aspley 22 September 1841).
Should be easy enough. But, no. Lawrence (father) seems to have been a hairdresser, his father also called Lawrence, also with a wife named Sarah (née Cull), seems to have been a carpenter.

So they are not of the family of the Norfolk Reverend LG, son of Stephen G, who married an Ann, nor of the LG son of another LG who married another Sarah (Hawthorne) ... this genealogy thing is full of traps!
But on to Edward. First sighting, 1835. Warwickshire. Getting married on 23 July to .. oh no! Another Sarah. This one is née Brown and is the daughter of the master of the Stonehouse Lunatic Asylum, Henley-on Arden. And Edward is already a solicitor.
I don't know since when, but he's in partnership with one William Welsh Lea .... whaaaaaaat!
Parenthesis. I may be old and rather infirm. I may not be able to remember what I had for tea last night. I may forget the horse's names. BUT ... I have seen that name afore!
When a collection is 'disposed of' it doesn't always all end up in the same place. Here is Mr Gibbs's filed letter from 1851 in our friend's shop. BUT. Down in Hove, the always interesting 'hovebooks' has a bundlette of Lea and Gibbs letters from, especially, 1842. 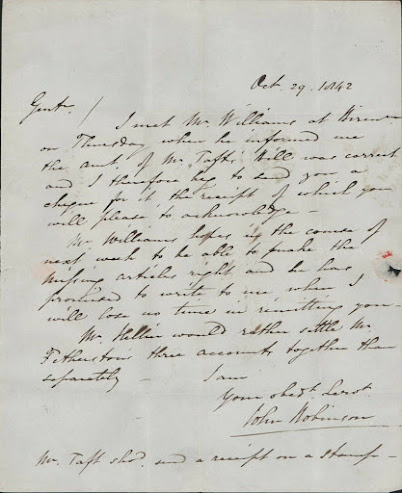 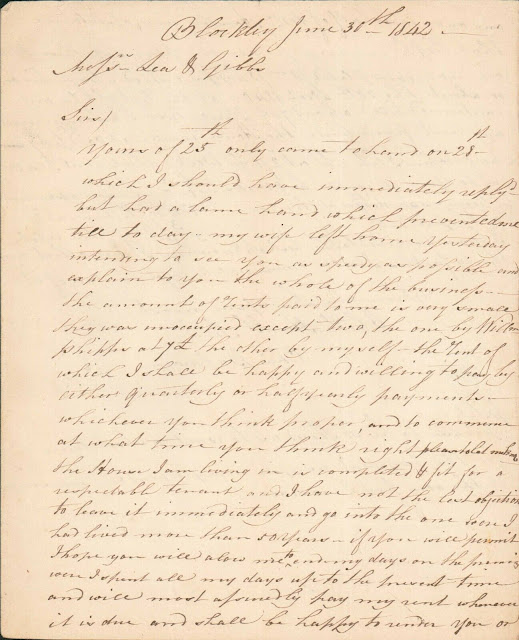 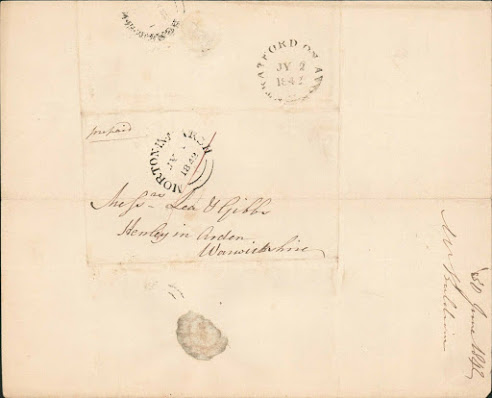 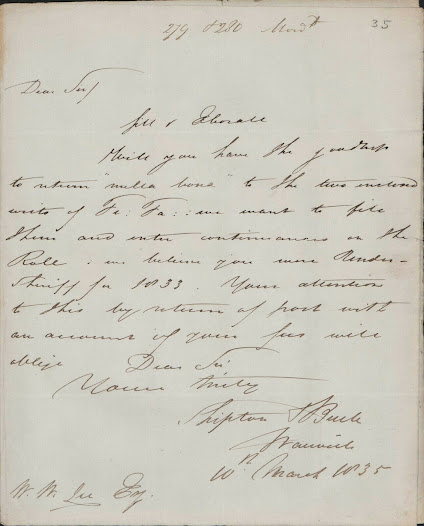 Well, I see them, and later Edward without William (1791-1852), doing the usual duties of a provincial solicitor: mostly to do with estates .. 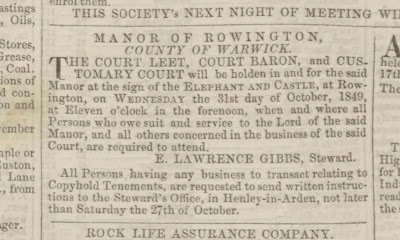 Their surviving son, Edward Brown Lawrence Gibbs (1837-1891) worked as a land surveyor.
Well, apart from Maisie Gay, my day's diggings had been a tad regulation, but my reward was in store. I left it till last, because it was a letter from a Victorian clergyman -- not a breed of which I am over fond ...  to his lawyer. 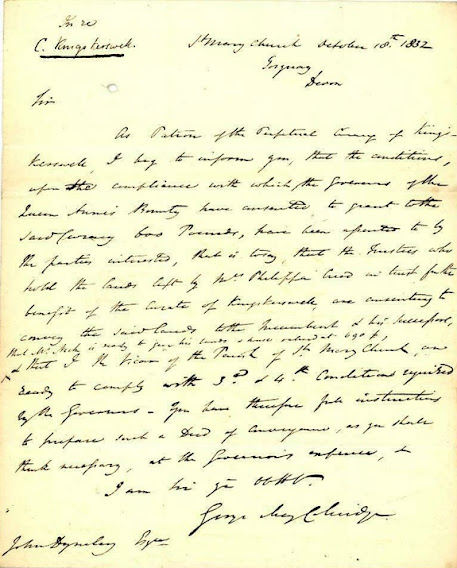 The lawyer, John Dyneley 'of Gray's Inn', described himself in 1829, during the Teynsham sanity case (seemingly in his capacity as 'Secretary of Lunatics') which is related in detail in the book The Report of the Proceedings on the trial of the cause Doe on the demise of Lord Teynham: 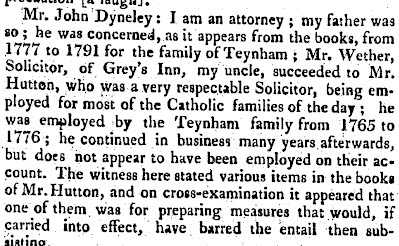 So respectable professional folk. Acting for the aristocratic and wealthy (and occaionally 'insane').
His correspondent is the vicar of St Mary's Church, Ottery St Mary. The incumbent of that church had in his gift the curacy of Kings-Kerswell: as he says he was 'patron of the perpetual curacy', a curacy which held a stipend of a natty 600L per year. Part of the jobs for the boys set-up of the time, and a way of shoving very obvious younger sons who had studied Greek and Latin into a gentlemanly sinecure for life. I see that in this case a wealthy widow (Mrs Phillipa Creed, of whom one can read in many places) had bequeathed five acres and houses in trust to shore up the said curacy (and undoubtedly save her soul) and that seemingly another wealthy sinner ('Mr Peck'?) is rallying to the cause as well. And someone has persauded the Governors of Queen Ann's Bounty to reverse their previous decision and allow the curacy their support. 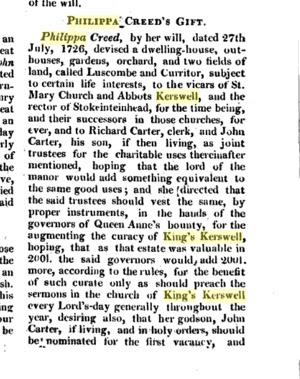 Anyway, here we have the presiding vicar of St Mary's writing to his London lawyer to get the modifications to the situation legally documented. So? Pretty ordinary letter. But ...
Who is the Rev who wrote it? George May Coleridge. Son of the previous vicar of Ottery St Mary: George Coleridge (1764-1828) who was the brother of one Samuel Taylor Coleridge. Buzzword!
STC even wrote a poem to his brother...
A blessed lot hath he, who having past
His youth and early manhood in the stir
And turmoil of the world, retreats at length,
With cares that move, not agitate the heart,
To the same dwelling where his father dwelt;
And haply views his tottering little ones
Embrace those aged knees, and climb that lap,
On which first kneeling his own infancy
Lisped its brief prayer. Such, O my earliest friend!
Thine and thy brothers' favorable lot.
At distance did ye climb life's upland road,
Yet cheered and cheering: now fraternal love
Hath drawn you to one centre. Be your days
Holy, and blest and blessing may ye live!
even though "I quitted Ottery, when I was so young, that most of those endearing circumstances, that are wont to render the scenes and companions of our childhood delightful in recollection, I have associated with the place of my education".
He also penned a number of letters to his newphew which survive in collections round the world. But the modern Coleridge family didn't seemingly rate the Rev G M. His portrait sold at Sotheby's for a measly 624L .. 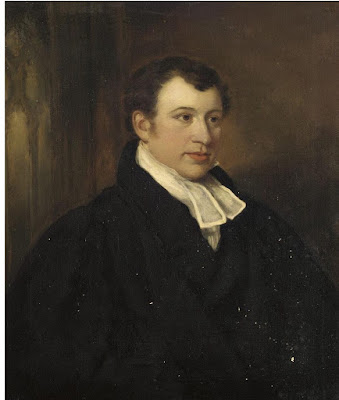 George May Coleridge (b Ottery St Mary x 27 November 1798; d Vicarage, St Mary 5 June 1847). At his death, a sermon was preached at his church by James Anthony Froude, another supporter of the Tractarian movement of which Coleridge was a staunch supporter 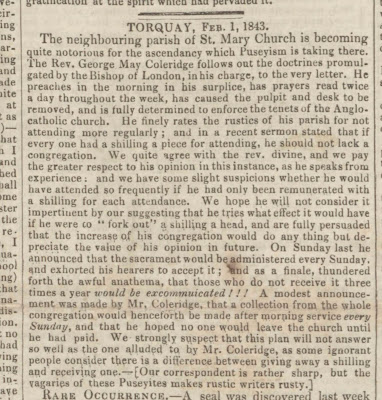 and the local press eulogised him in verse 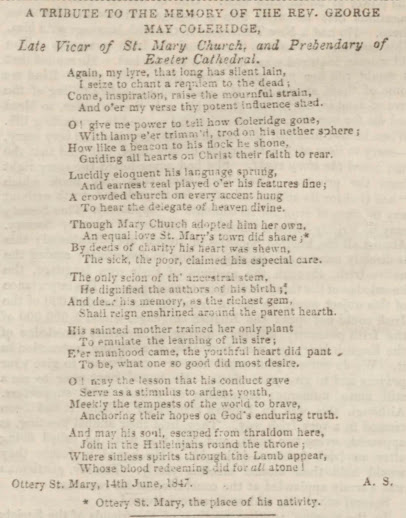 His name lived on for some years thanks to another vicar, Rev William Smith of St Miniver. Otherwise Hart-Smith. So therefore some kind of relation. He lumbered a son with the resounding name of George May Coleridge Hart Smith ... the poor chap lies in Remuera gravyard, New Zealand. He made it to assistant bank manager ... 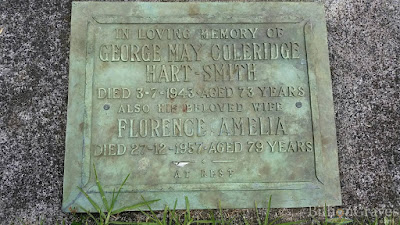 Well, there we are. My little handful of ephemera turned up not only the poet Coleridge, not only the fascinating Mrs Priscilla Creed ... but wow! Maisie Gay!  A good day's delving, I'd say. 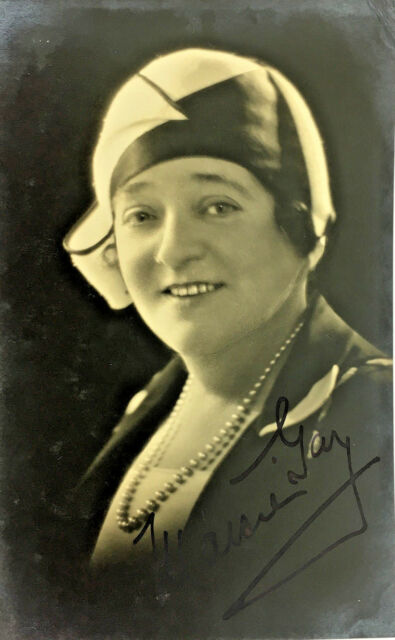 A garden party at Ottery St Mary. I guess that's the Coleridge's church in the background ..

Posted by GEROLSTEIN at 2:34 PM