Cornmell: or, a legal document from the 1890s

Here it is. I don't know why I picked out this one from the bundle on show -- there were others older, more potentially interesting and more difficult, but there we are .. I think I went to put the kettle on and came back and it was on the screen ... 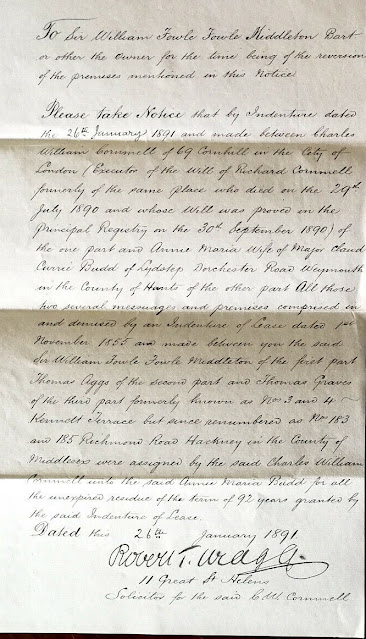 It is nothing dramatic. Just a transfer of 'ownership' of a piece of property in Hackney, following the death of the original leasehold owner ...

The freehold owner of the property is Sir William Fowle Fowle Middleton, Bart, with an interest to Thomas Aggs, and a Thomas Graves. Well, I should say 'the estate' of the man with the peculiar chickenlike name. He (1784-1860) had been dead for thirty years.  A delicious website explains the name: https://pottoingaround.wordpress.com/2013/06/03/how-william-fowle-fowle-middleton-got-his-name/

It also explains how WFFM had money which he invested in property in Hackney and elsewhere. Hackney archive has a copy of the document allowing others to carry on his portfolio after his (childless) death, but alas you have to go to Hackney to see it

I am guessing that Thomas Aggs was the principal appointee. He was quite a few wealthy people's choice to act for them, or execute their wills. He was, of course, wealthy himself: a descendant of a Norfolk family which included the Norfolk Bank. I see him carrying on his activities from 1 Bishopsgate Street Within in the 1850s, directing this and that ... things like the Royal Australian Banking and Gold Promoting Company .. I wonder what happened to it ....
Anyway, he clearly deftly handled the Aggs money, the Gurney money and lots of other money, and died at Dorking 17 November 1897 leaving his wife a large fortune.
I haven't followed up Thomas Graves 'of the third party'. Maybe he had a sublease of some sort.
Anyway. Investment property, with no doubt at all. Both for WFFM and Mr Aggs, and for Mr Richard Cornmell, insurance man, underwriter, financier etc who leased the lots from them, for 99 years, in 1855.
So, where is/was the property? It was 'two messuages' which had been situate at 5 & 6 Kennetts Lane, Hackney, until the council (as councils do) decided to change the address to 133 and 135 Richmond Road.
I spot a Robert Low[e] Esq dying at 133 Richmond Road in 12 May 1867 aged 57. Esquire, indeed! He was an ex-upholsterer. Well, there he is in the 1861 census: 'fundholder' with wife, mother, daughter, daughter's husband, 10 month old grandson, and one teenage 'house servant'. The house seems to be labelled as no 8 Marlborough Villas. Next door on one side are a bunch of merchant seamen, on the other .. ohho! .. a bank manager. And on the other side of the sailors is the Marlborough Arms! A marker! Hmm. Later known as the Duke of Marlborough, demolished for flats in 1996. By which time it was number 212. But it had been no 152 ....howwwwl .. And look, there's a street called Shrublands Grove. Shrublands was the name of Fowle-Fowle's home mansion. Perhaps he owned the whole area! Like a mini-Grosvenor. 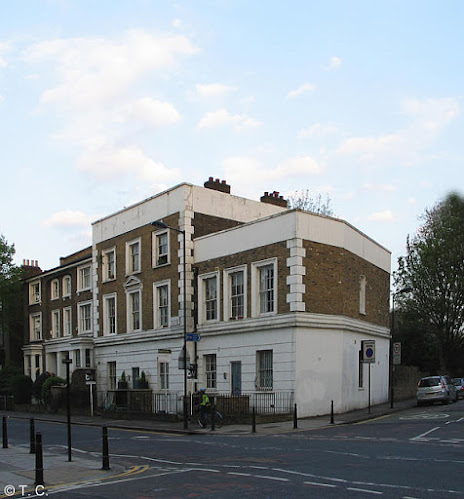 Well, I can't find anything about the houses, other than Mr Low and family, but I see that in 1873 no 129, with 77 years of unexpired lease, fetched 500 pounds at auction. In 2020, I see both family homes have been filleted into flats ...
Now the family. Richard Cornmell (b ?1828; d 16 Phillimore Gardens 29 Juy 1890). Well, I have spent several hours on the worthy Richard, and found frustratingly little. His wedding registration (1854) tells us that his father was a William Cornmell. That's all. He married one Caroline Moore from Swanscombe, Kent (Thomas/Mercy, x 24 September 1826; d Somerville, Mount Ephraim, Tunbridge Wells 21 May 1890), and had a seemingly uneventful married life, punctuated by four children. Of them, later.
When I first see Richard in the 1841 census he is working as an 'clerk/insurance agent' at an office at 9 Copthall Court,Throgmorton Street. Head of the office is Mr David Carruthers Budd (1790-1852), from olton in Devon, broker. As we shall see, the kind of 'insurance' 'brokering' and later 'underwriting' the firm was into was no little fish . And I think this pair were not the originators of 'Carruthers, Cornmell', because I see the firm listed in the Lloyd's registers as active in 1834. And yes! Lloyd's meeting 1832: D Carruthers, 9 Copthall Court! And this 1831 .. 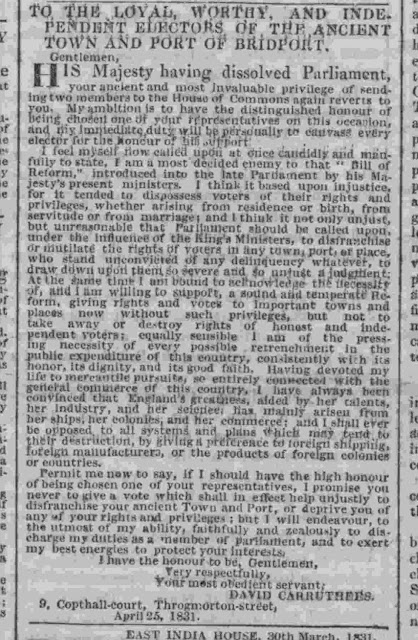 Wow! In 1835 he was elected as Conservative member for ... Hull! And died.
Now, I'm guessing a bit here, with not much to go on, that this rather pushy Mr David Carruthers (?brother to Mrs Budd's mother?) and papa Cornmell had been in business together for a while, brokering, shipping, underwriting, insuring (and taking time off to go to Parliament)...  Hull would be an obvious constituecy for a shipping man. Well, his legacy would come back to fling Richard into the court of Chancery and the law manuals of Great Britain, as a precedent case, for many many years.
I notice, too, that when Richard's brother, William, died at the age of 41 in 1869, he was described as 'of Lloyd's'. Richard was as well. So the Cornmells, it seems. were -- for goodness knows how long -- into the lucrative business of shipping and maritime insurance. (Ah! I see the firm had been, in 1847, 'for a great many years very extensively employed as insurance brokers at Lloyd's').
Over the years, I have tried to follow Richard. In 1851 he and Mr Budd are at new offices at Tyson Place. Mr Budd is 'underwriter' and Richard is 'insurance agent'. In 1854, as we know he got wed. In 1862, Carruthers, Cornmell is still in existence, and Richard seemingly kept his head down and his pockets open, appearing only in shareholder's lists -- the Imperial Bank, the Bank of British North America, the Grand Trunk Railway of Canada -- while Mrs Cornmell supported the German Hospital at Dalston and other such good works. At one stage, there was a Cornmell, Fish & Co  which spread its influence as far as Australia. Oh, and Richard owned the thirteen houses which made up Wrestler's Court in Bishopgate. He was now 'of 68-9 Cornhill' (work) and 16 Upper Phillimore Gardens (home). The 1871 census shows him there with Caroline, the children, a French governess, a butler and four more servants .... And in 1876 .. well children first.
All four lived. Three married. And, for various reasons,  helped keep Richard's name in the papers.
Charles William Cornmell (b 1855; d 4 Eldon Road, Kensington 16 December 1897) was the heir apparent. He went into the firm, seconded his father ... he was in action in the press -- something to do with 'The British Goldfields of South Africa' -- till a week before his death, unmarried, at the age of 42. He named as his executors his brother and his younger sister. Not his elder sister. For good reason.
Caroline Elizabeth Cornmell (b 1857; d September 1916) didn't keep her head down. Let's just say she wed a sprig by name Anthony Wroughton Bathe (7 November 1881), had a live son, Cecil David Dalrymple Bathe (3 April 1884; d 31 January 1973), and soon ended up in the divorce courts. Her husband, she claimed, kicked her in the gut causing her second child to be born dead. Lists of infidelities on both sides were paraded ... and Carrie went home to father. Well, we can't tell, can we, who lied, but little Cecil is with his father in the next census. Strangely (well, we don't know the full story), Richard treated her extra well in his will. 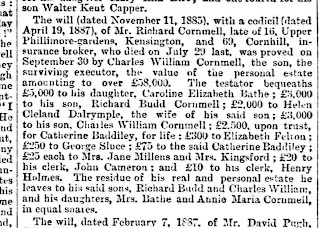 Richard Budd Cornmell (b Hackney 1855; d 4 Eldon Rd, Kensington 28 March 1902) went into the family trade. He married Helen Cleland Dalrymple Bruce (d Hackney 27 January 1919), a Colonel's daughter who enjoyed amateur dramtics and sang rather well.
And Anna Maria Cornwell? She who is to get, at the brother's saying, the two houses in Hackney. Why, Anna Maria married (9 August 1887) a nephew of Mr Budd the broker, Major (!) Claude Currie Budd (b Bath 1847; d Bournemouth 16 January 1929). Mrs Currie Budd can be seen breeding show horses and being social in Bath in the early years of the century ... the Major seems to be elsewhere. Ho hum.
Well, that, I thought was the end of that. A bit unsatisfactory. And then I came upon this. Mrs Currie Budd got rid of her interest in the Hackney houses pretty smartly 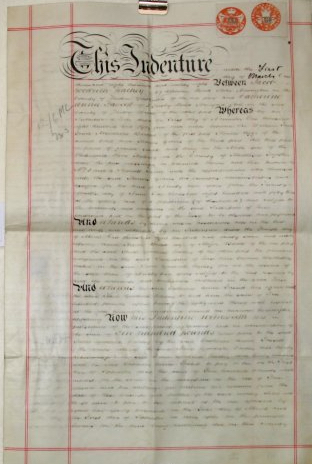 No, I can't read it either. I guess we're not supposed to. Anyway its the document of sale of the two houses, in 1897 to another 'investor'.  I won't be buying this piece of parchment, but if anyone's enthused, it's on http://familychest.co.uk/FamilyChestDocs/documents/0903033.htm
Now, at last, 1876. The event which enshrined Mr Richard Cornmell in the British legal archives. Yes it was a testamentary dispute, and yes, heaps and heaps of money was involved. And the family. Dead ones. Richard was involved as an executor of the will of Charles Bladen Carruthers (d Norwood 28 September 1869, 'only surviving son' of Carruthers MP), who I see was, up to 1848, the partner of his subsequent partner, D C Budd, at the Copthall Street, and the 'defendants' were the trustees for another dead person ... anyway, it was all about trusts and stuff, heaps of consols were involved, and the case made a legal point which resulted in Cornmell v Keith getting itself a mention in book after learned book concerning Trusts. Amongst all the mentions, I have failed to find the actual result, but, of course, the result isn't often the point in Chancery suits ...
And the will? Richard left an enormous 58,000L. I wonder who Catherine Baddiley was .. b Bishopsgate 1812; d Hackney 1897 .. buried in Abney Park, Hackney ... looks as if she is the elderly widow boarding in the Clapton High Rd: 'no occupation, shops, houses' in 1881. Ah yes, boarding with the family of George Sluce, commercial clerk .. lots of little Sluces. What's the connection, then, that they inherit a nice blodge of money? No .. I sha'n't go there!
Well, I did. Catherine Perry married Alfred Robert Baddiley (1824-1863) in 1844. And she's family. Somehow. Because, in 1855, Richard Cornmell placed an ad in the Australian papers, searching for his nephew: George Richard Perry.

Father: stockbroker. Might have known! Cash flows in the veins of that family! But .... 1851

'cow keeper'? bankrupt cow keeper. And it gets worse. Two years later, he's up for GBH? Poor Catherine!
Shall I keep going? .... amazing where one piece of paper can lead you. No enough ... post and be damned!

Posted by GEROLSTEIN at 9:48 PM