Bérardi: the triumphs of a baby bass-baritone

Charles Bérardi. I saw this splendid photo on e-bay, but his name didn't ring a bell. 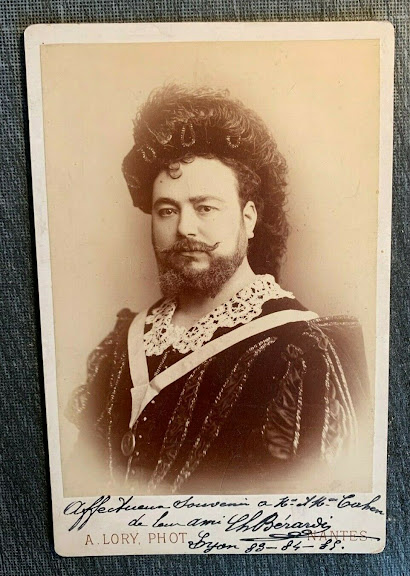 So I thought I would look ... Lyon, yes. But so much more ... he was for years a leading baritone at the Paris Opéra. Not too much in the way of clues on the web, but a bit of jigsawpuzzling and some elderly French newspapers and here's what I came up with ...
'Le petit corps [qui] enfermait une voix sonore et vigoreuse' 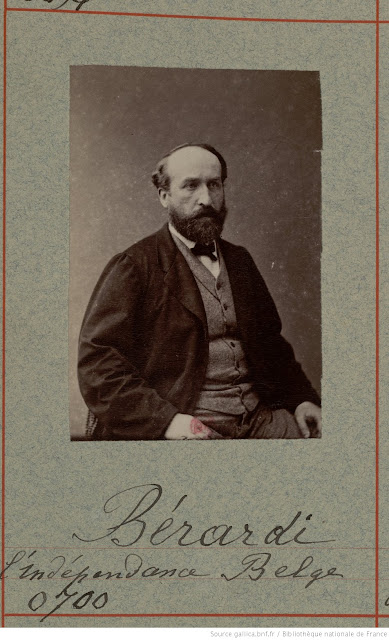 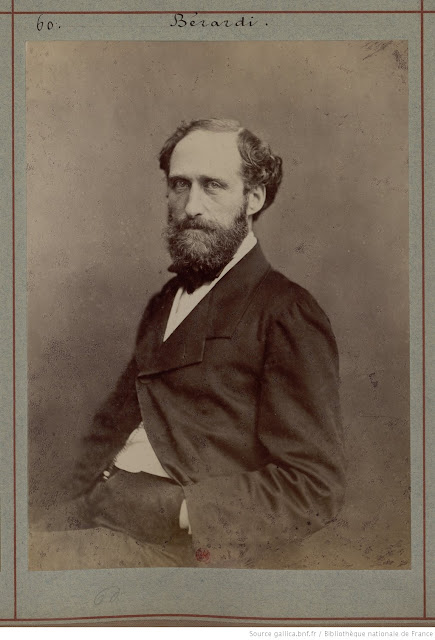 Kutsch and Riemens tells us nebulously that he made his debut (no date) in Marseilles and sang in 'various opera houses in the French provinces' until 1872 ...
My first sighting of him is in December 1866, and not in the provinces, but in Paris ...
An 1879 article says 'pupil of Depassio, of Momas and Mme Carvahlo ... made his debut at the ex- [Théâtre] Lyrique of the Place du Châtelet (direction: Carvalho) as 'le prieur' in Der Freischütz, then played Capulet then Friar Lawrence in Roméo et Juliette to the Juliette of Mme Miolan-Carvalho, Sarastro in La flûte enchantée with Marimon as the Queen, and Sardanapalus ...' 'barely 20 years old'. Actually, not even. if his age at death is correct.
'From Paris, he headed for the provinces and over the next years was heard at Le Havre, Antwerp, Geneva, Barcelona, Liege, Bordeaux, Ghent, before, in 1872, ending up at the Théâtre de la Monnaie in Brussels'.  Seems good. I found him in Antwerp in 1869 making his debut as Brogni in La Juive ('un chanteur d'élite; so succès n'est pas douteux'), one of the plumbing bass roles in which he would appear regularly over the years to come. A Cardinal Brogni in his very earliest twenties is hard to imagine, but Ghent would note 'malgré sa jeunesse, il a une maturité de talent ..'. I spot him in 1870 in Bruges, in concert, but his most substantial employ came in 1871, when he was hired as 'basse de grand-opéra' at the Théâtre de Gand. Amongst the roles he played there were Bertram in Robert le Diable ('il laisse loin derrière la plupart de ses prédecesseurs'), Brogni in La Juive, Don Pedro in L'Africaine, Marcel in Les Huguenots, Falstaff (!!) in Le Songe d'une nuit d'été, Walter in Guillaume Tell, Raymond in Charles VI, and the basso baddie in Un ballo in maschera.
In April 1872, he was hired for the Théâtre de la Monnaie, in the same position. Brussels refused, at first, to be impressed by this everywhere-lauded, far-too-young double-basso when he appeared in Tell, but when they heard his Bertram, the critics had to give in.  Charles would stay the season at Brussels, adding to the inevitable Brogni, Bernard, Marcel, Don Pedro ... anything that dove below the stave, such roles as Mephistopheles in Faust, Félix in I Martiri, Kaspar in Der Freischütz, Landgrave Hermann in Tannhäuser. I also see him singing Jerusalem in Bruges. And everytime for wonderful notices for his voice, and increasingly good ones (age oblige!) for his acting.
From Belgium, he went on to d'Herblay at Lyon (Les Huguenots, Gounod's Le Feu de Ciel, Faust 'la voix est véritablement splendide' with Réboux), then to Husson at the Grand Théâtre at Marseille. Mostly the same old roles. But, it was said, that his range rather faded out out at E or F, which limited opportunities. He made a hit at Marseille in the title-role of Rossini's Moïse ('a pu faire valoir tous ces moyens') and took part in one of the theatre's less brilliant premières, Ivan Quatre.
Mabyethology tells us 'he worked 8-10 years in the provinces before...' Well, seven perhaps. But Halanzier of the Opéra heard the noise coming out of Marseille, and, 30 December 1875,  signed up the young basso for three years at the Paris Opéra. He didn't make a mistake. Charles Bérardi would still be singing at the Opéra until not very long before his death. 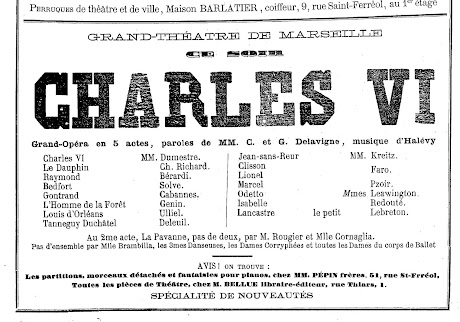 His first appearance 17 August 1876 was as a step-in in Charles Menu's role of Mathisen in Le Prophète, and thereafter he repeated his Brogni (official debut), his Bertram, his Marcel, sang the role of Andrea Cornaro in La Reine de Chypre and 7 October 1878 created the part of Félix in Gounod's unsuccessful Polyeucte. He also succeeded Boudouresque as Timour in Le Roi de Lahore.
In 1880 and 1881 he played a season at Monte Carlo (Faust, La Favorita, Leporello in Don Giovanni, Germont in La Traviata, Marullo in Rigoletto, Basilio in Il Barbiere di Siviglia, title-role in Don Pasquale etc, after which he spent two seasons at Nantes (Roi de Lahore, Herod in Herodiade). When he appeared at the Château d'Eau in Il Trovatore, however, he played, now, the rôle of Conte di Luna. The former basso profundo had found two and a half extra notes above the stave, lightened off a tad, and from now on he would be a 'baryton'. And, as a baritone, 30 April 1885 he rejoined the troupe at the Paris Opéra. His new debut was in the title-role of Guillaume Tell, and over the years to follow I see him as the Grand Priest in Sigurd, as Jonas, le sonneur in La Patrie, Nelusko in L'Africaine, Henri III in the disastrous La Dame de Montsoreau, the title-role in Henri VIII, Ashton in Lucia di Lammermoor, Amonasro in Aida, Benvenuto in Ascanio, the title-role in Hamlet, Telramund in Lohengrin, Alphonse in La Favorita and swapping his well-known Huguenots Marcel for Nevers or St Bris. I see him last at the Opéra in early 1893 in Rigoletto, no longer playing Marullo but in the title-role, acclaimed as one of his best portrayals
In 1886 he revisited Brussels in his new capacity (Jacques de Molay in Les Templiers, Harald in Gwendoline) in 1887-8 it was the Marseille Grand Théâtre (Hamlet, L'Africaine, Guillaume Tell, Les Pêcheurs de Perle), and finally the Grand Théâtre de Lyon .. 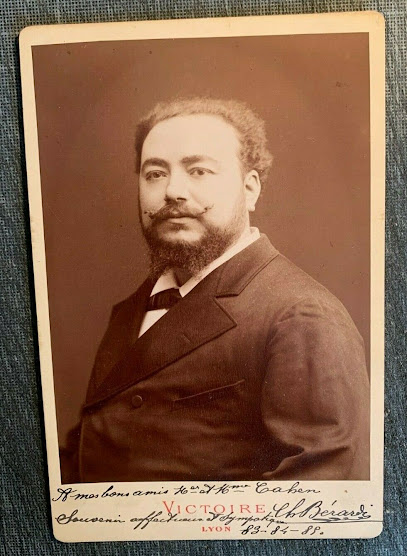 It was in Lyon that he fell prey to the 'bronchite' which, exacerbated by his lifelong diabetes, 6 January 1894, would prove fatal.
In a career, started early, ended early, Charles, whether as a bass or as a baritone had culled, throughout, magnificnt notices for his natural voice -- large, colourful and expansive -- as well as for his technique and, progressively, for his acting ability which expanded and was given fuller play as he moved into his thirties and, above all, when he graduated to such such roles as Rigoletto.
Of Bérardi's personal life, I know little. 'Bérardi' was allegedly a stage name. His real name was said to be Benou. But he staunchly claimed the relationship with Léon and Gaston Bérardi, who equally as staunchly denied it. His father apparently died in 1879. He must have married , for one obituary referred to 'his elder son ... excellent baritone of the Paris Opéra'. Elsewhere, this Victor Bérardi is referred to as a brother, and his credits are of a lesser order... Rennes, Avignon ... He made his loudest mark whe he sued the singer Muratore for payment for lessons. Alas, by the time judgement was given, Victor was dead. Whoever he was.
Charles's personal life clearly needs a bit of investigation, but his professional life is clear and grand enough, and certainly deserves to be a bit more accurately recorded. I'll have a search for those missing early engagements ..
Posted by GEROLSTEIN at 5:02 PM