KENNEDY: or, who sold the ancestors' portraits?

My friends Robin and Geraldine have a racehorse by the stallion American Ideal. They named it -- I'm not sure whether cynically or sincerely -- 'Kennedy'. Well, 'Kennedy' has been a bit of a problem horse: he's shown flashes of promise, but, on the whole, has generated more despair than rejoicing. Yesterday, he ran at our local track. He went out at 20-1 (I think he might have been 100-1, except NZ's top driver was in the sulky!) and wow! He flashed his brightest yet, finishing a very solid 4th.

So when I sat down this morning for the Longest Day of the Year, and saw a photo of a lovely lady by the name of Kennedy, I thought: it's a sign. I have to 'do' her today. 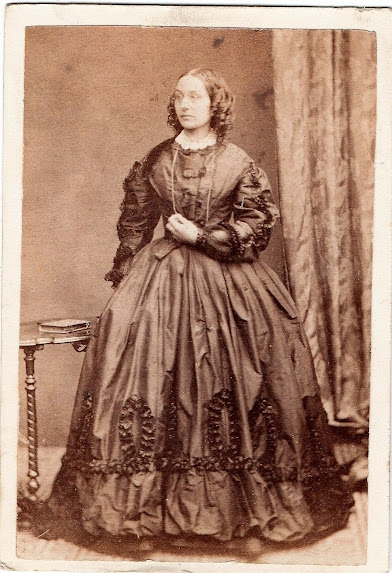 The verso is inscribed Aunt Maria Hardy Kennedy. Well, the inscriber ... whom I have since set out to identify ... wasn't quite right. She was Anna Maria Hardy Kennedy, and I think may have been the inscriber's great-aunt. Anyway, I instantly checked the vendor's stock and ... whee! ... eight more Kennedys ... this could be fun. So I dug. And having dug, and discovered, I checked the web and found that others had dug in the same patch before. But, although Susanna Long and others had some family photos on the trees ... not these ones. Either the family photos were split up some time ago, ot there was more than one photo album in the Kennedy (etc) family.

So, what did I find, and where did pretty Anna Maria fit in.

Mr Lewis Kennedy, surveyor and land agent of St James's Street, and his wife Harriet Sewell née Mitton (I haven't gone back any further) were married 9 April 1817 and over the next decade produced four sons and two daughters, to wit:

Well, we've got Anna Maria. And here is Harriet ... 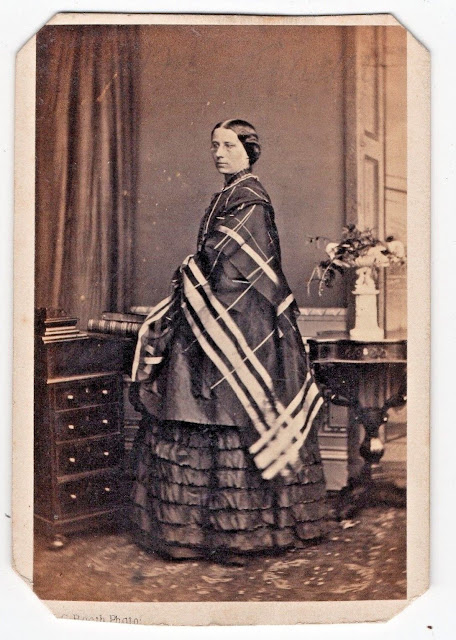 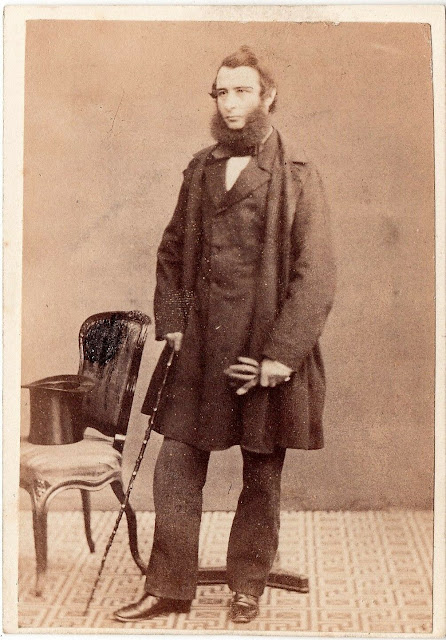 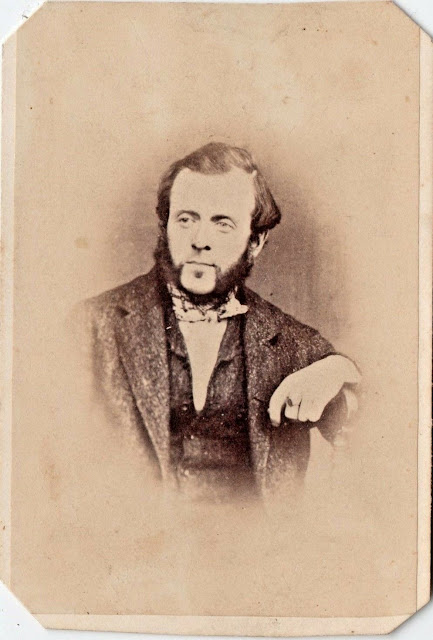 John was a solicitor, and the fellow in the family whom most of the others named as their executor. He lived at number 6 Alexander Square, and the other lived at number 5. John remained a bachelor for his first half-century and took a wife at an age where a gentleman does so for support rather than sport. Mrs Frances Kennedy (née Medex), however, predeceased him.
So. Start from the top. George and his ancestors have been tidily summed up by the Dictionary of Scottish Architects:
George Penrose Kennedy was born in 1821, the son of Lewis Kennedy, subsequently factor of the Drummond Castle estates of Peter Robert Drummond Burrell, Lord Willoughby d'Eresby, who inherited the Grimsthrope, Gwydyr and Drummond estates in 1828. The Kennedys were an important family of landscape gardeners. Kennedy's great-grandfather Lewis Kennedy (1721-82) had set up the Vineyard Nurseries in Hammersmith c.1745. His son John Kennedy, the architect's grandfather, continued the business there. Of his twelve children, Lewis, the sixth child and the architect's father, was sent to Riga to make contacts for the business in 1804, and was in Paris supplying plants to the Empress Josephine in 1812 when he was taken prisoner. On 24 April 1817 he married Harriet Sewell Mitton, their address being 56 St James's Street, Kensington, by which date he had a career as a landscape gardener separately from the family nursery, notably at Dunkeld (1813) where he designed conservatories for the Duke of Atholl, and at Stow, Norfolk (1812), Oddington (1813), Chiswick House (1814), Trent Park (1815) and Buckhurst Park (1819). During the course of this work Peter Burrell, after 1828 Drummond Burrell, who had married the only surviving child of Lord Perth, invited Lewis to take over the management of the Drummond estates, initially from 5 Alexander Square, Brompton but with a Scottish base at Pitkellony House, Muthill, in or before 1822. There the Kennedys brought up six children, the sons being Lewis Drummond (1818-88) who became a Rector in the Lincolnshire estates, John Eugene (1819-1901), who succeeded his father as factor at Drummond Castle in 1868, George Penrose, and Archibald (1828-51) a civil engineer who died young.Lewis Kennedy appears to have secured for his son George a place in the office of Sir Charles Barry then engaged in proposals for remodelling Drummond Castle as a neo-Norman pile. From the albums sold by Sotheby's in 1890 (to Weinreb from whom acquired by the Canadian Centre for Architecture) it appears that in addition to other major Barry projects, he was involved in the re-creation of the formal gardens at Drumlanrig in 1840; he probably began the restoration of those at Drummond Castle when still in Barry's employ and made the designs for the banqueting tent erected there for Queen Victoria's visit on 2 September 1842. Thereafter he assisted Francis Cranmer Penrose with his archaeological investigations in Athens, being there in March 1845, and by 1849 he was in practice on his own account at Sussex Chambers, St James's.Sometime before 1855 Kennedy established an office at 119 Hope Street, Glasgow, perhaps initially only as a branch office, but by 1868 the Glasgow office, now at 160 Hope Street, had become his sole address with Robert Dalglish as partner there from at least 1861; his practice had not, however, been exclusively Scottish as the 'Architect's Engineer's and Building Trades' Directory' of that year refers to at least one residence in Liverpool and 'numerous churches, schools, factories, mills, hotels, &c in Scotland and Wales'. This same directory also lists unspecified 'country seats, residences and villas' at Paisley, Johnstone, Cambuslang, Govan, Coatbridge, Glasgow, Kintyre, Loch Katrine, Largs, Arrochar, Ayr, Dumbarton, Rutherglen, Kincardine and Crieff.The Drummond Estate connection was lost when Kennedy's brother John was dismissed in 1877 and his family was required to leave Pitkillony. By that date Kennedy does not appear to have been a very active partner. It was perhaps a combination of the dismissal from the Drummond Estate and the sharp decline in business after the failure of the City of Glasgow Bank in the following year that led to the partnership with Dalglish being dissolved c.1879. Kennedy remained at 40 Union Street for a time but subsequently retired to Sunnyside, Lewisham, Kent, and died in 1898.
What more can I say? George had a bundle of children by his two wives. Our group of pictures includes one of them [Harriet Louisa] Florence Kennedy (b Monkland, Scotland 22 April 1865) who can be seen with her sister Dorothea Steele Kennedy (b 1862), living/staying with uncle John in Alexander Square in 1901.
This is Florence's 21st birthday photo 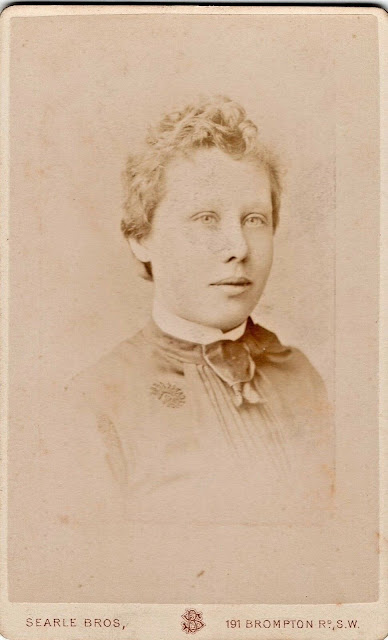 Florence seems to have stayed with John and/or Anna Maria for some years until marrying (11 November 1911) Scotsman Mr Allan Ramsay at the age of 46. Anna Maria named her as an executor of her will. Florence had waited for her fun. I see her, with her husband, living in sunny Italy in their sixties. Latterly the couple settled in Margate, where Ramsay died 21 December 1935. Florence died in a Surrey nursing home 7 April 1957.
Eldest brother Lewis became a Reverend. I see, in 1871, he is rector of Theddlethorpe. There is no photo of him here, but he has made it to the National Portait Gallery! Why? How? He looks like one of the thundery pulpit variety of clerics. 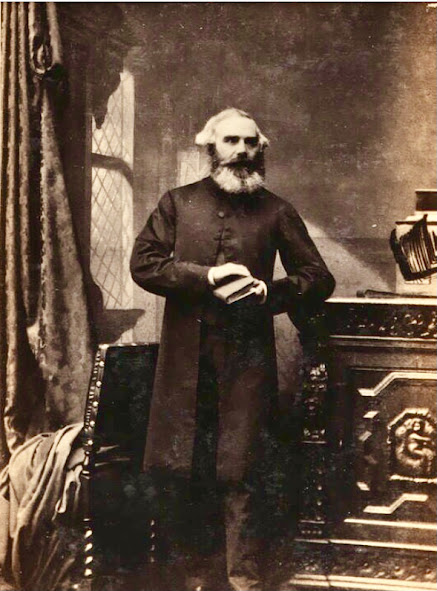 However, we (and the NPG) do have a picture of his wife, Maria née Shelley ... 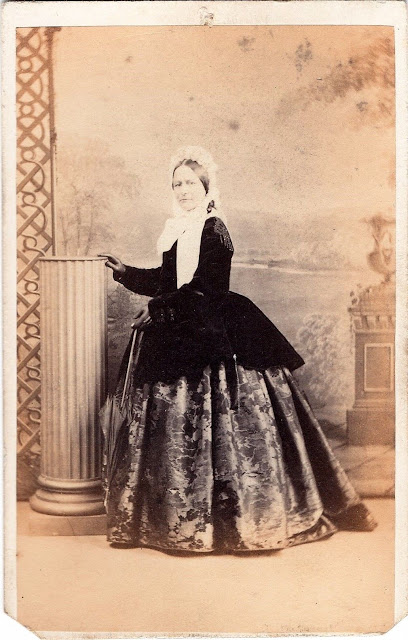 After Maria's death the Rev Lewis remarried Miss Kathleen Staniforth. Unlike most Victorian vicars, who seem to have been reproducing whenever not preaching, however, he seems to have had no offspring.
That's the sons taken care of. Three with no issue. So our collector seems not to have come therefrom. We also know that Anna Maria died a maiden lady ... which leaves Harriet Mitton Kennedy. And here, I am sure, we are on the right track. Because the back of Harriet's portrait is inscribed 'grandmother'.
Harriet married solicitor Mr William Sidney Kinder (b Holborn 16 April 1822; d Pitkelloney nr Crieff 7 September 1859)  and they combined in three sons and two daughters. Laura (b 21 September 1846) died aged five, Edward (14 January 1852) aged 8 months, leaving Annie Drummond Kinder (18 John St, Bedford Row b 31 May 1858; d 6 North Hill, Hornsey 15 November 1837), Cecilia Marion Kinder (b 5 Thurloe Sq 18 December 1853; d 24 October 89 Chetwynd Rd, Highgate Rd 1927) and Lewis Kennedy Kinder (b 5 Thurloe Sq 29 January 1856; d Worthing 16 January 1932). The Rev Lewis K Kinder ... 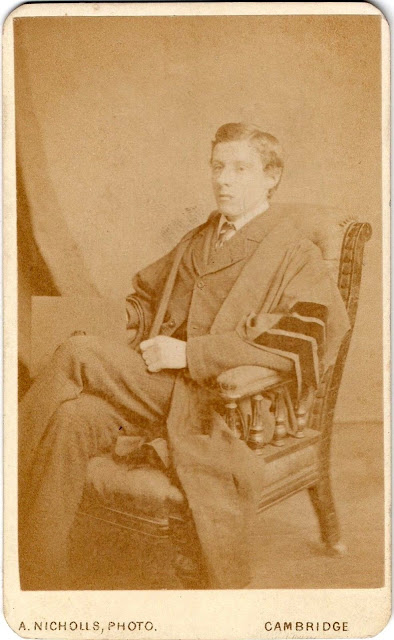 Well, Cissie and Annie lived together as maiden ladies 'on private income' all their lives, but the clergy are back in form in this generation. Lewis, in the course of two wives, Eleanor Hannah née Payne and Jemima Margaret née MacGregor) fathered ten children. Ergo: one of those ten has inscribed our photos. As this one: 'Aunt Cissie or Aunt Annie?' One of the two, but they don't know who ... 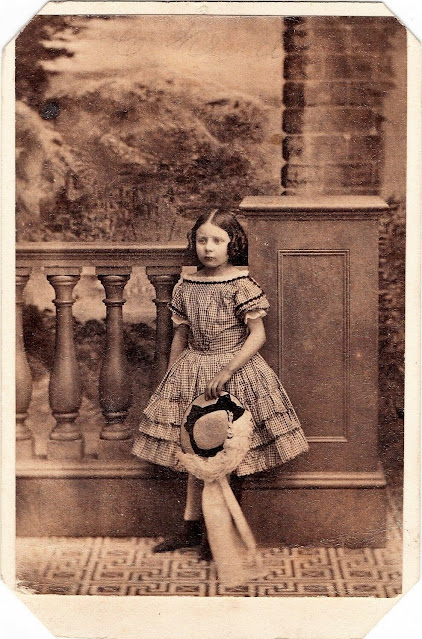