The Clock Shop: Marble and Chip

Today's e-baysical treasure. From the stock of the Heffner Trading Co, Pennsylvania.

John L Golden will present two new sketches The Clock Shop and The River of Souls at the Lambs' Gambol June 4 and 5.
And it was, with considerable success. Which was scarcely surprising as the cast for the occasion included such well-known played as Clifton Crawford (the Clockmaker), Pat Rooney (the Cuckoo Clock), Frank Moulan (the False Alarm Clock) and Frederick Stanley and Ernest Truex as the little Dutch Clocks, Hans and Gretchen.
Morris Gest promptly bought the rights to the sketch, but before he got it on to the stage he had ceded his interest to the popular vaudebille duo, Mary Marble and Sam Chip, purveyors of 'Dutch' sketches to the world of variety (In Old Edam, In the Land of the Dykes) 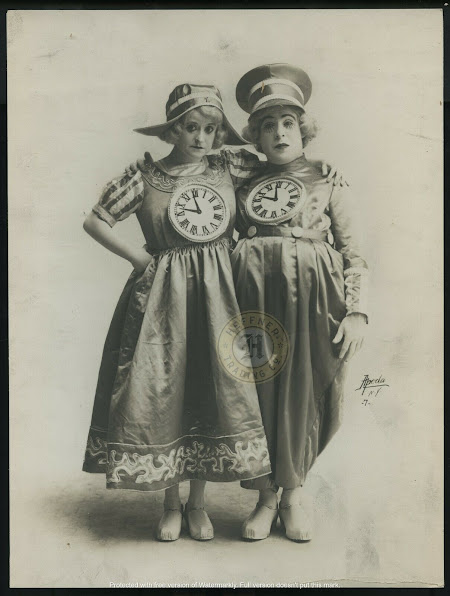 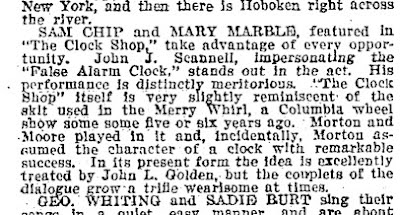 although the piece apparently developed and slimmed over the two years that they played it: 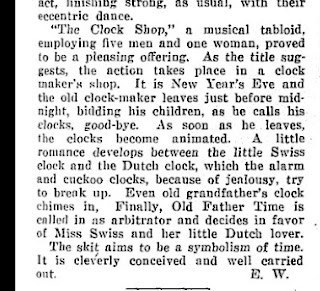 Alas, Sam died in Rochester 'from a heart attack following acute indigestion' on 11 April 1917. The newspapers noted that he was 40 years old and had been 25 years on the stage. During the last 18 he had been teamed with Miss Marble. They also noted that his real name was Samuel Kornblum.
Mary carried on. She survived an on-stage broken leg, bankruptcy through a venture into the restaurant business ... and seems to have given up the halls in the early 20s. 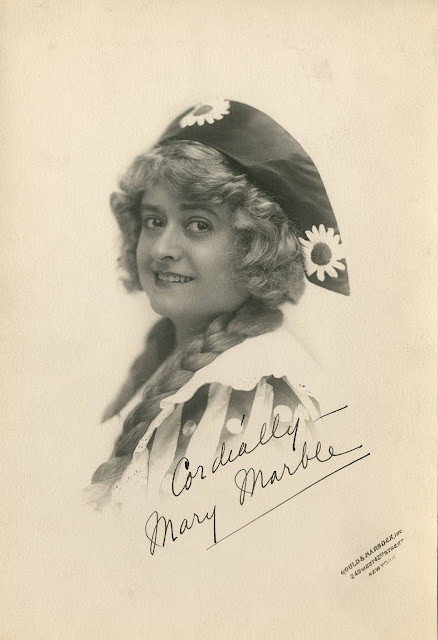 Mary Emma Marble Dunne was born in Chicago 28 March 1873 (Who's Who chops 3 years off) into a theatre family. Her father was Dan[ford] Marble (d 4 December 1900) her mother Matilda née Le Page. Father was a post office worker, but he Marble family were involved widely in the theatre, and, well, this is what WWITT says about Emma ('Mary'):
Well, they left out the 'tiny comedienne's' starring tour in Nancy Brown, her stint in Tuxedo ... William Marble was Mary's uncle. But, um...   what about her youthful (15 September 1892) Iowa marriage to actor Willis G Oglesby alias Willis Marble?
John Wallis Dunne (b Onondaga 27 October 1852; d San Francisco 9 November 1932) was a busy actor and producer who has previously been married to the ill-fated performer 'Patti Rosa' (eig Jessie Buckingham). The couple were apparently wed in Octoberish 1898. Dunne's newsworthy career would fill a volume. Suffice it here the he became the husband of our girl. 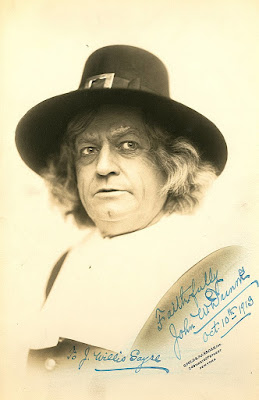 I see her in the 1930 census, aged 57, father born Connecticut, mother French Canadian, married 19 years, living/staying with her aged aunt Emma Marble in Manhattan. Dunne is in California with his family.
Mary died 5 February 1965.
Now wait a moment ... 14 June 1918 ... 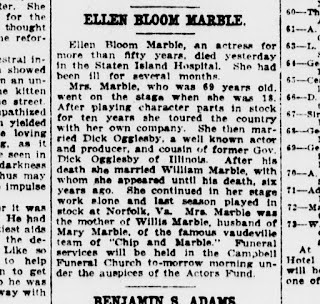 Do I scent bigamy? Or ... oh! These theatricals! Have I lost a Marble? There were rather a lot of them ... see this obit of Mary's father from 1900 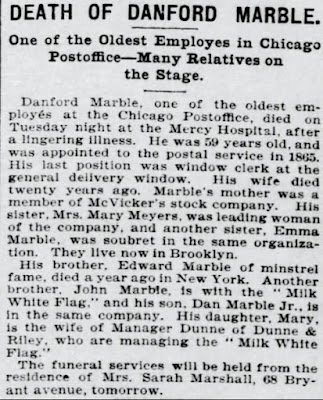