The Rapers: from the Italian Opera to the Antipodes


Anyone who has ever done a wee bit of historical research knows what happens. You pop back to, say, the London 1850s to check something out, and while you are doing so something else intriguing catches your eye and leads you off down a totally different path, and you get all caught up in someone else's story, full of music and mayhem, and sex and courtcases, and you end up in Australia and in, yes, in a graveyard in Christchurch, New Zealand again ...

So. This morning I stumbled over the report of a pair of 1843 concerts given at Oxford Town Hall and Stamford, at which the featured vocalists were Miss E Bromley and Miss G Santos. Well, we know Eleanor Bromley. I wrote all about her in my article on her celebrated daughter, Nellie. Here, she was taking her first steps at the top of a fine career, cut sadly short. Miss Santos? She sang 'Care compagne', 'The Sylphs Invitation' and 'Come to the Greenwood' and was evidently less successful that her partner. Their teacher got them a London spot at an early Allcroft concert, in excellent company, after which Miss Santos disappears from all annals. So, who was this teacher? Mr Brandau? I don't know of him.

Frederick William Brandau. Clearly Friedrich Wilhelm originally. 'Professor of singing, piano, guitar and organist of the German Lutheran Church'. He flourished from 1835ish to his death in 1855. I first spot him doing guitar arrangements of the music of Auber's Lestocq in 1835. I've no idea how old he was then, I can't find him in the censi -- but almost every transcription of an official paper calls him Brandan, Brandon, Brandam, Brandar. Sigh. However, he operated at various times from addresses at 59 Oxford St, 22 Great Portland Street, 44 Warren Street and 316 Regent Street, so he was wholly London orientated. 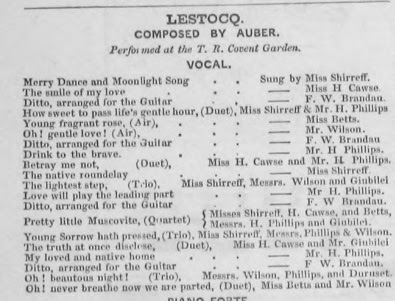 Some time in the late 1840s he allegedly married one Charlotte Caroline Sweeny, and in 1849 they started producing children: Frederic Edward (29 March 1849), Emile Augustus (6 July 1850), Ferdinand Julius Charles (11 November 1852). But, in early 1855, F W died, leaving Charlotte with three infants, and a fourth (Olivia Florence 3 August 1855) on the way. The profession put on a Benefit at the Hanover Square Rooms for the bereft ones. Oh, things didn't get much better for Charlotte. The two youngest babes died in 1857, she re-married, an architect's clerk, William Backhouse from Crossgate in Leeds in 1860, but died herself at 26 Georgiana Street, Pancras, in July 1864 'aged 37'. I see that Emil quit England for California ('draughtsman'), I lose Ferdy. 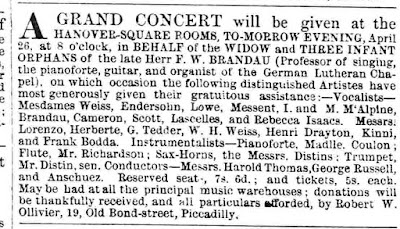 Now, during FW's lifetime he apparently made just a few attempts to lunch pupils on the concert scene. I have found but three. The two above, and a Miss Rose Raper. She didn't last much longer than Miss Santos -- I see her daring 'Non piú mesta' at Henry Dulcken's 1836 concert and displaying 'a mezzo soprano voice of excellent quality'in a Thalberg song at Mr Neate's soiree, alongside Mrs Shaw and Susan Bruce. And that is it. Of course, she preferred marriage to music .. 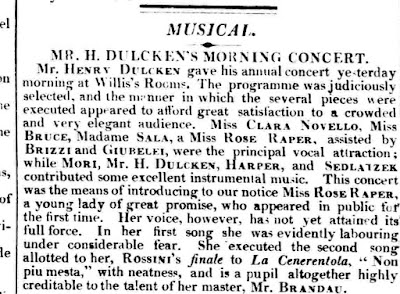 But 'Raper' rang a bell. I'd passed some Misses Raper during my 20 years peregrinations in the Victorian music world. 10 to 1 they were connected. And they were.
William Raper, pork butcher and property owner (b 1790; d February 1850), and his wife Sarah née Punn (m 11 March 1821, d 1841) had seven daughters that I know of. They also had four sons, of whom two died as three-year-olds. Of the girls, Sarah (1828) and Sarah Fanny (1835) died as infants, and the survivors were
CECILIA ROSABEL[LA] b 8 Tichborne St 6 December 1821; d Paris, 5 October 1879
SOPHIA JULIA b 8 Tichborne St 17 February 1823; d  Kensington 6 March 1907
LOUISA b 8 Tichborne St 22 January 1825; d 15 Commercial Rd Pimlico 31 July 1867
ELIZA b 8 Tichborne St 6 January 1830; d Kensington 1855
MARIAN b 8 Tichborne St 28 July 1833; d Hove 1 March 1907
And four of these were to some extent involved in the world of Victorian music.
Cecilia is our 'Rosa'. After her musical moments, she married John Campbell Mackenzie, who was on the editorial staff of Galignani's Messenger and consequently spent much time in France. She also taught singing from the family home in Brompton's Thistle Grove. She died of a fever, 65 rue Ste Anne, Paris, aged 58, and her husband followed shortly after (6 December 1879). Their only son, Alfred Camille, died at 32 (Dinan 14 September 1878).
Sophia also professed to be a vocalist. She didn't need to be. Father had left her his 'whole freehold estate in Kent'. The only one of the sisters not to marry, she lived until the age of 84.
Eliza (to whom father bequeathed his pianoforte) married the popular baritone and singing teacher, Giovanni Battista Ciabatta, of whom I have written at length, but died at the age of 25, leaving him with a daughter, Laura.
Marian married a young vocalist by the name of 'Henri Mapleson' aka 'Signor Veroni' by whom she had fallen pregnant. James Henry Mapleson rose from indifferent vocalist, to effective musical agent, to the post of the supremo of London's and New York's Italian Opera seasons. Marion bore him Henry, Nina Elizabeth Eugénie, Charles, Alice Maud, Sydney, Arthur, Albert Victor ... and survived him (d 14 November 1902), which nearly all their children didn't, dying in poor circumstances and largely blind in 1907. And all those foolish internet hysterians who say that her husband was 'married to Marie Roze' are utterly in error. The widow Perkins was briefly and illegally 'married' to the much less effective Henry jr (1851-1927), that first, just-in-time son of our Marian.  And he went on to marry others, including the strange American divette, Laura Schirmer. Of whom I have also written in detail.
Which leaves Louisa. She married a civil service clerk names Carew Henry Reynell, had two sons, and died at 42.
But. I thought that was it. But. That was counting without the male side of the family. The youngest, Campbell, became a wine merchant and died 21 June 1890 in Kentish Town.  But the other surviving son, Alfred, was to bring a touch of scandal to the family.
ALFRED RAPER b 8 Tichborne St 21 April 1832; d Chelsea 20 October 1892.
Alfred said on his marriage certificate (1858) that he was a sculptor. His wife said he was a policeman. However, in the 1860s, he became treasurer and acting manager for his brother-in-law, Mapleson, at Her Majesty's Theatre and the Italian Opera. It was a job which he retained for some thirty years, and seems to have fulfilled impeccably. So ... what was not impeccable?
It seems, his private life.
Alfred married one Mary Jane Harriet Hodges (b Rodney Place, Kent Rd, Southwark 27 January 1837). Who apparently like to be called Ada. They can be seen living at Thistle Grove in the 1871 census with what are allegedly two daughters. Florence aged 8 and Ada [Pauline] aged 5. Alfred would later say the Florence was adopted. Ada died aged 6 (Thistle Grove, 7 November 1872). A son, Alfred Alexander Thomas George was born 6 May 1875. 'Ada' would swear in court that she had only born two children, and both were dead. Very odd. Especially as, in later years 'Colonel' A A T G Raper could be spotted marrying and breeding in Christchurch and in Queensland, whence mother and 'sister' had fled. He died and was buried in Towoomba (11 December 1921).
There is, of course, a possibility that he was Ada's son and not Alfred's. Because when the filthy washing began to be aired in the courts of law, it became pretty obvious that around 1875 both partners had been what the merry murderess of Cook County jail would describe as 'screwing around'.

Ada certainly came out of it the worse, because she had screwed around with, amongst others, one Thomas Wainwright, who with his brother, Henry, had been convicted for the murder of Whitechapel 'actress', Harriet Lane. Henry was executed. Thomas merely jailed. And Ada was in court each day ...  but that's another story.
Things had chugged along until Ada ran short of money and started pestering Alfred, at work, for handouts. Alfred, at the first Wainwright rumours, had, so he claimed, moved out. Finally, she went to court, and the two of them got involved in the festival of lies of which a sample above. I wonder the judge let such obvious untruths pass.
Anyway, the case heard, Ada, Florence and Alfred junior all headed for the antipodes. Florence stopped in Queensland (17 June 1887) where she married a respectable native of Schleswig Holstein named Heinrich Klüver and settled down to motherhood and a long life (d 27 Carl St, Brisbane 11 January 1941). Just whose daughter she was, we shall doubtless never know ...
Alfred, who seems to have arrived in Brisbane in 1889, married one Maud Colenso in Christchurch, somehow assumed the title of 'Colonel' ... apparently of the Volunteers, like his cousin Henry Mapleson ... actually, in 1899, he was a picture-frame-maker in Christchurch's Victoria Street. I suppose the Ada Florence Maud Raper born in Christchurch in 1900 and married in Queensland to Nesbit Joseph Roy Linwood, and died in Brisbane in 1988 was theirs.
Ada settled in Christchurch as well. Apparently in North Street, St Albans, right near to my old home in Knowles Street,  She died there, 25 August 1898 'aged 61' and is buried in Linwood Cemetery. Her death notice said  that she was 'deeply regretted'. I wonder by whom.

And Alfred? He was seemingly already gone. Is he the Alfred Raper who is shacked up with mother-of-four, Diana Maria Poulton (née Lamb, d 8 February 1934) in 1881, who claims (untruthfully) to be Diana Raper in 1891 ... in Blantyre Street. Who knows ...
We've come a bit of a distance from Mr Brandau ... but it's been an interesting journey, all the way to my back doors ... in Christchurch and in Queensland ...

Posted by GEROLSTEIN at 5:37 PM