I got into this bit of research concerning a C19th dancing girl quite by mistake. Got intrigued, and spent all of yesterday 'outing' her family and associates. Now, before I carry this historical exercise on into another day (the sun coming is out and the beach kiosk is beckoning) I shall grave in stone what I've winkled out.

The lady who started all was a dancing girlie who went by the name of 'Ada Luxmore'. Not to be confused with 'Mabel Luxmore' who was another soubrette altogether, whose real name wasn't Luxmore either, but Newman, and who was a sister to the well-known Kitty Loftus.

Ada's real name was Emily Sophia Newcombe, and she was born in the Essex village of Stock, near Chelmsford where she was baptised 9 September 1849. Father Charles (x 10 August 1806; d 22 October 1869) was a carpenter and builder from Witham, mother was Sarah née Hazelton from Great Burstead (m 29 August 1839), and they were already the parents of Charles Walter (d 1872), Eliza Alice (Mrs F C Brown), and John. After Emily, they would add an Ellen (Mrs Thomas Forster) and a Clarissa-Caroline (Mrs Wm Barnett Walshe). I do hope father wasn't the Charles N of Inworth, Witham who was fined for failing to support an illegitimate child in 1863.

I first see her name on a playbill at the London Alhambra in 1870, decorating the stage in Le Petit Faust  behind  Hervé and Emily Soldene, then at the Strand in The Idle Prentice, before she turned to the music-halls. In 1871 I spot her at the Liverpool Rotunda. Soon after, she joined up with the 'Edward Towers London Alhambra comic ballet troupe'. She would remain with this company for some eight years, and it was taken for granted that she was the de facto Mrs Towers. She couldn't be the real one, for the gentleman had a previous impediment.

So. Edward Towers. Whose name wasn't Towers at all. Peeling back the layers of pseudonyms wasn't too hard here, although the family historians have made a pigs' breakfast of the family. Edward's birth name was Edward Johnson. He was a son of a minor-houses actor, Joseph Johnson, who went under the name of Johnson Towers (d 8 July 1891), who in a good career was seen with Phelps at Sadler's Wells, with Osbaldistone at the Victoria, and for a while was the lessee at the Old Vic. His children would follow his lead, and in the 1860s brother Frank (d India 1886) was a young manager at the Vic before emigrating to Australia, Africa and India, while daughter Phoebe, of whom more anon, became a stalwart starlet of the dance world. And Edward. The family can be seen in 1851 -- Phoebe 12, Edward 10, Francis 8 and Emily 4 -- in Mitre Street, Waterloo Road. And in 1861 Edward is listed as a wine cooper. But it seems that was only half the story. In 1860 Mr Towers sr had produced a drama at his theatre: The White Indian, or the Forest Fawn and the Renegade's Daughter. Author: Edward Towers. His son? Surely. Edward followed up with a line of drama and pantomime scripts, mostly for Morris Abrahams at the Effingham Theatre, and later the Royal Alfred and the Pavilion. But it seems that Edward had a bipartite career. In 1864 an advertisement from Leeds announces Edward Towers and Fred H Neebe burlesque comedians, vocalists and dancers in their comic entertainment Kiddie-Wink, and in 1869 the Fred[erick William] Evans Grand London Alhambra Comic Ballet Company announces a tour with the famous comic dancer Evans, his wife 'Amy Rosalind' (Harriet Honor née Penn, daughter of theatre manager 'T P Simpson', b February 1842; d 23 August 1885), Will Simpson, Tom Lovell and 'the celebrated comic' Edward Towers.

Edward then began his own group, and in 1872 the little group was headed by him, Ada, and one named Hetty Towers. Hetty must have been some sort of family (she is referred to as such), but more precise I cannot yet be. She became a successful music-hall solo performer, after several years singing and dancing duets with Ada, and died in Tooting 18 April 1928 aged 76. So. born 1852? She is buried in the Actors' Graveyard  in Streatham as ... Hetty Towers.

During the 1870s they appeared 'the Towers trio', or a 'troupe', they played pantomime -- in 1875 she was Beauty and he the Beast in the eponymous panto, with the young Lisa Weber is support -- Ada and Hetty ('full of life and merriemnt') did their duets and sketches in the London halls,  and after Hetty's departure to go solo, we see Edward and Ada heading the 'Towers Quartet'. In 1879 they visited Constantinople, and on their return played the Oxford Music Hall, panto at Manchester and at Liverpool ...

And then Edward died. Or so it seems. An 'Edward Towers' is listed in the death registers for 1883 in Kensington. 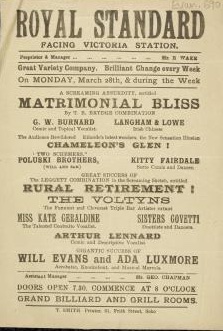 In 1884, Ada can be seen playing Robin Hood in Babes in the Wood at Manchester, in 1885 she retuned for Dick Whittington. Minnie Marshall was amongst the supporting cast, and the cat was played by the 9 year-old Will[iam Edward] Evans, son of the aforesaid Fred. In 1891, Will would marry the 'widowed' Ada, 19 years his elder. The pair appeared as an act in the halls -- including the opening bill at the new Oxford .. 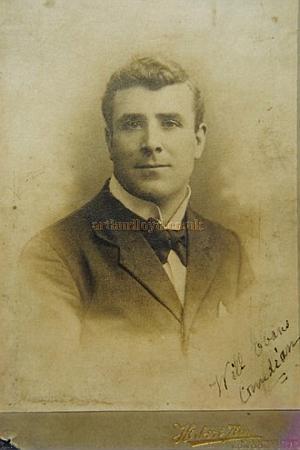 The subsequent career of Will Evans has been well and truly covered, so I shall now backtrack to Edward's sister, Phoebe Johnson dit Towers (d 25 November 1912). Phoebe danced. I see her in 1857, at the Vic, of course, dancing in The Dancing Scotchman with 'Miss Lauri Brunton'. The names of the dancing family of Lauri was frequently to be seen on the Vic bills, thought, of course, it wasn't their real name. Their real name was Lowe, and in 1856 Phoebe Towers-Johnson became Mrs Phoebe Lowe or Lauri. Her husband was Fred Lauri (Frederick William Lowe), but alas not for long. Dancer-choreographer Fred died at Winchester 14 October 1863. 'Mrs F Lauri' continued as a dancer, choreographer and then actress, and in 1867 she remarried. Her busband was a singer, William John Burchell dit Seymour, but he proved even less durable than poor Fred. He died in 1871, aged 33, but not before siring a son and a daughter Johnson-Towers-Lauri Burchell. Who, of course, became a dancer and of course chose herself a stage-name. Catherine Mary Lowe-Burchell became 'Katie Seymour'. And as Katie Seymour, a star of Gaiety musical comedy. 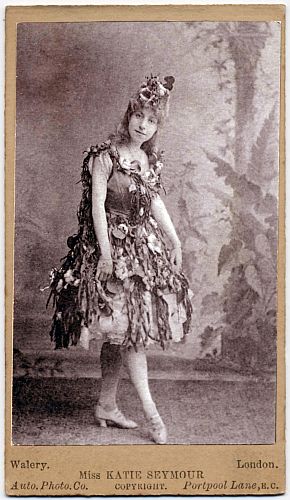 The Gaiety Theatre’s ‘musical comedy’ soubrette. The daughter of music-hall comedian and vocalist William John Seymour (né Burchell) and of Phoebe née Johnson dit Towers (d 25 November 1912), a member of the well-known Towers acting and dancing dynasty and widow of Fred Lowe of the celebrated Lauri family, pretty dancing soubrette Katie Seymour first appeared on the stage as a child, playing in the West End in children’s pantomimes (Colin in Goody Two-Shoes, 1876 Corneygrains the miller in Little Red Riding Hood 1877, Little John in Robin Hood and his Merry Little Men 1877 etc), and working as an eight year-old serio-comic on the music halls. In 1876 she appeared at the Standard Theatre in the music-hall scene in the drama After Dark, and danced at the South London Palace (as ‘Katie Lauri’) in the ballet Birds, in 1877 she played the halls in an entertainment called Fortune’s Frolic (Pavilion, Sun, Bedford, Marylebone, Middlesex), toured in the comedy-drama Grateful (‘Miss Katie Towers only five years old..) singing “The Five Ages of Woman”, and appeared at the Middlesex as ‘Kate Seymour, the little Entertainer’ doing an impersonation of ‘Poor Jo’ and singing Harrigan’s ‘Mulligan Guards’ (‘she danced nimbly and prettily and was warmly cheered’). She also played in music-hall sketches with Ambrose Maynard’s company, with the brothers Horne and others. In 1880 she made her Broadway début at Booth’s Theater as Fairy Queen to the Prince of Catherine Lewis, in H C Jarrett’s operatic spectacle Cinderella.  During the 1880s, she worked mostly in the music halls and pantomime in Britain, appearing in the Covent Garden pantomime of 1881 (Sally Waters), but she took over briefly the rôle of Edgar in Hollingshead’s production of the comic opera Dick (1884). She also appeared in variety at the Empire (1889) under the baton of Hervé, and played in America  for George W Lederer with a troupe called Herman’s Transatlantic Vaudevilles alongside Harry Athol (né Hollorand, whom she subsequently married), before, in her early twenties, she began to appear more steadily in the musical theatre. She appeared in the West End for C J Abud in Blue-Eyed Susan (1892, Rosy Morn) and for George Edwardes in Joan of Arc (1891, Blanche d'Arc), Don Juan (1893, Zoe, t/o Donna Julia) and La Mascotte (1893, Bianca) before turning herelf into a first-rank West End favourite through her Gaiety Theatre partnership with star comic, Edmund Payne. 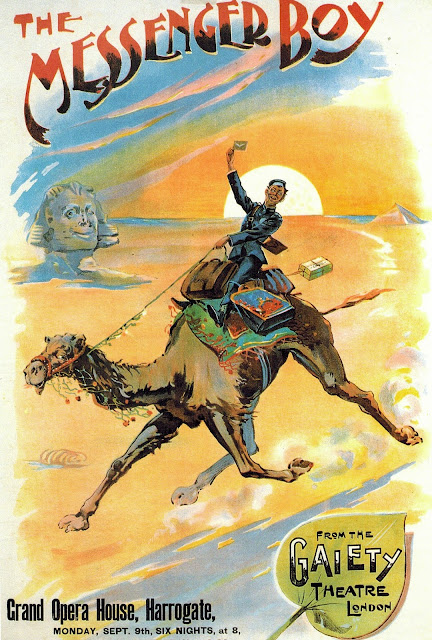 The pair scored the hit of the night in their song and dance `Love on the Japanese Plan' in The Shop Girl (1894, Miss Robinson), and Miss Seymour remained at the Gaiety thereafter, as principal soubrette-dancer, through My Girl (1896, Phoebe Toodge), The Circus Girl (1896, Lucille, the wire walker), A Runaway Girl (1898, Alice) and The Messenger Boy (1900, Rosa), in each of which she was paired with enormous success with the hugely popular little Payne. She made another Broadway appearance when she was added to the cast of the revamped The Casino Girl and subsequently interpolated into the 1901 production of The Strollers, but on her return to Britain she switched back to the music-halls, appearing at the Alhambra and other important houses. She made only one further appearance on the musical stage when she toured to South Africa with a musical comedy company along with other confirmed stars in John Le Hay and Frank Celli shortly before her death at the age of 35 of 'renal problems'.

Katie's funeral threw up some 'family' which required a little sorting out. There was Hettie 'aunt' and H Towers 'uncle'. Yay, Hettie. Well, an Henry Percival Towers (b 1874) the son of John and Frances Towers was manager at the Savoy Theatre. And there was 'sister', Mrs Harry Kernell. Er. Queenie Vassar eigentlich Cecilia McMahon was a Scots actress and a widow. Her husband, Kernell, had died of the clap a decade earlier in America and she had briskly remarried. Sister? How? Ah, there was another Harry (1888-1953) ... he married Georgette Wood ... oh, several .. oh pook. And a little article in the Australian press about the Jewish influence in the theatre, numbered Katie alongside Marion Hood amongst the race's representatives ...fancy that!

Oh well, I sorted Ada, which was my first intention! And I will get Hettie in the end! There can't be too many 76 year-old ladies who died in Tooting on 18 April 1928 ..