The Ottoman Beauty and the Well-Bred British lady

Busy morning this day. Washing, dishwashing, cleaning, and, at 9am, a wobble down Yamba Hill to pay the year's third amount of you're-a-nasty-foreigner taxes in which Australia specialises ...

That achieved, I had a nice wee cup of coffee at the Beachwood Café (the curious Sandbar nextdoor to me doesn't open its doors on Mondays and Tuesdays, for some reason), schlepped back up the hill, and decided that -- the days duties having been done between 6.30 and 9.30 -- I was going to have a play day.

Theatrical or Lucky Dip? Oh, tax day has to be a Lucky Dip day ...

So I dipped, and pulled out two rather contrasting ladies ... 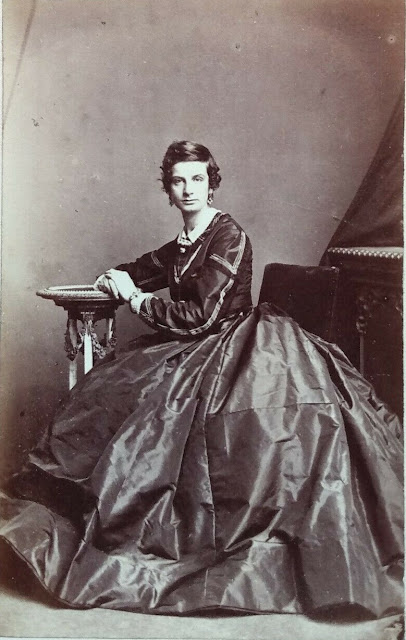 Both ladies were labelled with sufficient identification to allow me a starting point, even if the inscriptions required a certain amount of decipherment ... 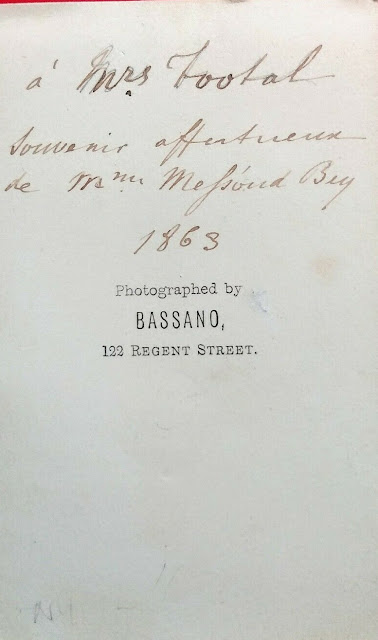 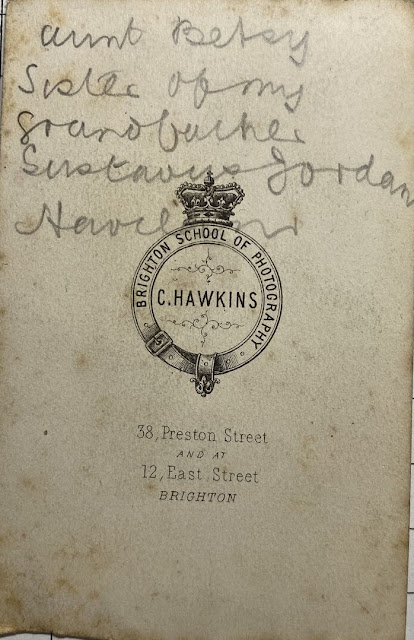 Well, one turned out to be a brief but fascinating exercise, the other led me into the world of country estates, manorial reverends, complex inheritances and Chancery lawsuits ... you know, good old C19th English stuff.

Let's look first at the Sophia-Loren look-alike from 1863. Photographed by Bassano, no less. And, no, she's not Mrs Tootal, who was the recipient of the picture, she is Madame 'Messoud Bey'. In other words, Mrs Smit. And she didn't really need to date the photo for the only visit that she and her husband made to London was in the later months of 1862 and the first part of 1863, when Colonel Messoud Bey came to Britain attached to Nazim Bey, envoy of the Ottoman Empire to the International Exhibition. Mrs Smit? Yes, the gentleman who called himself Messoud Bey was a Belgian by the name of Félix Hippolye Smit, who had quit the lowlands, converted to musulman and mixed himself up rather effectively in Ottomanic politics and business. Anyway, while he was in London, his address was 61 Ebury Street, Eaton Square. While the Bey did whatever he was there to do -- trade links I imagine -- his wife got herself presented at court by the wife of the Turkish ambassador .. and then they went home, for Félix to take up a new post as manager of the Ottoman Cotton Company. Who his lady wife was, and what else she did beyond courtesying to Queen Victoria, I have no idea.

And Mrs Tootal? I guess she was the Mrs Tootal was was presented in court a little earlier by the Marchioness of Chandos, and thereafter 'presented' other ladies, who donated to the Home for Invalid Gentlewomen and appeared somewhere near the bottom of the lists of ladies at society marriages and balls.

'Aunt Betsy', sister of Gustavus Jordan Haviland, was something altogether else. Betsy had a gentlewoman's pedigree in gallons, even though the big names (and probably the big fortunes and estates) of that pedigree were a few generations back. And on the distaff side.

Betsy (b Burwash, x 21 June 1814; d 23 Maida Vale 2 September 1874) and her several brothers (her only sister died aged 9) were the children of one Henry Hone Haviland, a sometime lieutenant and captain in the Royal Marines. And, no, he wasn't Horne or Homer or Hoane (of 22 'trees' on ancestry, none spells his name correctly), and he wasn't a maori ... New Zealand was still just emerging from its maoriori era ... the name of Hone was a gentry one: 'Hone of Blockfield Manor' and I'm assuming that the Havilands, who hailed from Gloucestershire, were somehow connected therewith. Whilst still a naval officer Henry Hone (1778-1849) had married (3 September 1805) a lady by the name of Ann Dyke Allport. 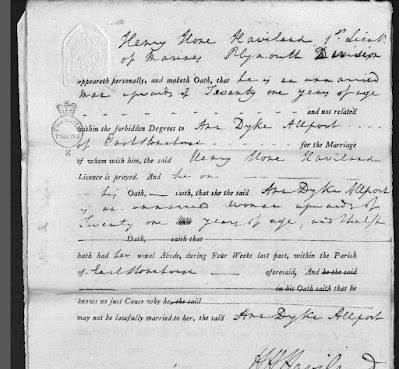 The Allport is all-important (for the odd Chancery suit), but I shall go forward first.
Their surviving children were
Gustavus Jordan HAVILAND (b Hull 1806; d 19 January 1863)
Edward Savage HAVILAND (b Plymouth 1809; d 466 Edgeware Rd 18 February 1873)
Francis Douglas Hone HAVILAND (b Wouldham 1811; d Islington 7 June 1860)
Betsy as above
Henry Miles HAVILAND (b Burwash x 27 May 1816; d Datchet 15 February 1887)
and the important word there is 'Jordan'.
Edward graduated as a doctor from Edinburgh, general-practised in Maida Vale, with spinster sister Betsy for company, and neither of them had issue. Francis took over the family farm at Frenches and grew hops. He married, went bankrupt, and seemingly had no issue. Henry was a regularly bankrupt cowkeeper in Buckinghamshire. And from time to time they were all involved in lawsuits, disentangling the maternal family heritage 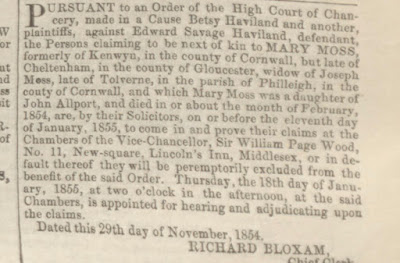 Allport. Mother's family. Then there was the run in with the insane Rev Harry Jordan Place of Marnhull, Dorest, And who was Jane Sophia Trotter (1764-1846)? But the Jordans ...   I shall be brief. The Reverend George Jordan, Diocesan Chancellor of Chichester, married Ann Bowers, daughter of the Bishop of Chichester. Lots of money. Lots of Land. Very gentry. And lots and lots of daughters. Thirteen of them, actually. And a couple of sons. I wasn't going into all of those, although I daresay someone has! 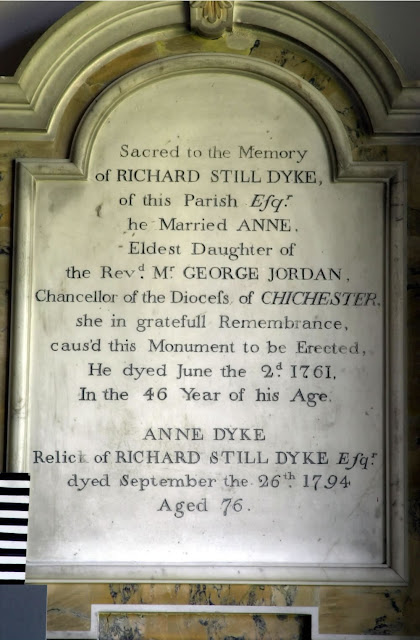 Anyway, Ann and Henry ended up, amongs their various legal pastimes, being replacement executors for a couple of the unwed Jordan girls; Frances (b 1 August 1826; d 7 June 1816) and 92 year-old Dorothy (b 6 January 1729; d 7 November 1821). Dorothy's multi-page will with four codicils is one hell of a read! But I guess there was a lot to leave. And the name of Jordan continued in the multiple branches of the family. Vide Gustavus Jordan Haviland, and his elder but short-lived sister, Ann Jordan Haviland. 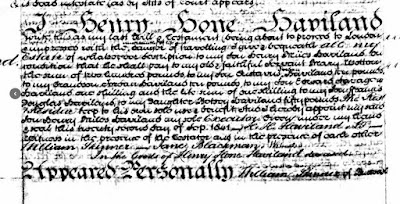 The one censorial mention I have found of Gustavus, he says he is an 'engineer'. Facts? He was 'the eldest son of Captain Haviland of the Frenches, Burwash' and married Maria (b 15 May 1806; d 7 Albert St, Regent's Park 7 October 1876), 'youngest daughter of the late Mr [Robert] Haviland (1764-1840), late of Cirencester 18 December 1852. A cousin of some degree? They had, seemingly, but one son who was named Douglas (x Brixton 11 November 1835) but seems to have latterly been known as Jordan. And he had a son named Gustavus Jordan Haviland (b 7 Kingston Russell Place 11 May 1862; d Winchmore Hill 13 December 1936). Sigh.
So who called Gus (1) grandfather? Well, Jordan did have a daughter, Maria Elizabeth (1880-1963) by his second wife, but she died unwed, so it must be the progeny of Douglas-Jordan who inscribed this photo. And that means, it can only be Gus (2). Yes, it looks like male handwriting. Gus (2) went into the civil service, as a clerk in the customs department. He stayed single until he was nearly sixty. I see him living with his stepmother and half-sister in Hornsey in the 1911 census ...
Well, Gus. Thanks for the picture of Aunty Besty. I think she looks rather splendid. And I'm sorry your branch of a family tree that once sported a Bishop and a morass of wealthy maiden ladies seems to have rather fizzles out in the twentieth century. But I'm quite sure other branches of that vast Jordan family still survive. I'm almost tempted to investigate ...
I wonder who got the money and lands that all those lawsuits were about. As usual, with Chancery cases, I imagine the lawyers. Gus (2) left his widow L1397 10s 5d.