When I wrote the first edition my Encyclopaedia of the Musical Theatre, the Internet had not been invented. I had to exhume my history from libraries round the world. Now, of course me have information (and a vast deal of mis-information) in our homes, at the click of a mouse. I am proud to say that surprisingly little of what I wrote a quarter of century ago has proven to be erroneous, but I have managed to fill in a thousand gaps in dates, names and facts, and some of my little articles could really do with a wash 'n' brush-up.
This was brought home to me, for the umpteenth when my friend, Dr Kevin Clarke, asked me for my lines on Emmy Wehlen. Well, the were all right as far as they went. But things like real name and dates of birth and death are important to an Encyclopaedist, and Emmy's were lacking. So I decided to spend the couple of hours before heading down town for my promised lunch of garlic prawns and pasta in seeing if I could dig up some of the missing data.
Well I got some of what I needed. The article now reads

Glamorous German singer who abandoned the musical stage for films.

The 'wunderhübsche' Emmy Wehlen began her career in the musical theatre in Stuttgart, Munich and in Berlin, where she was a member of the company at the Thalia-Theater in 1907-8 (Ihr Sechs-Uhr-Onkel, Doktor Klapperstorch, Das Mitternachtsmädel, Magda in Die Brunnen-Nymphe) before being taken to Britain to tour in the title-rôle in George Edwardes's production of The Merry Widow (1909). She appeared next as the gold-digging Olga in Edwardes's version of The Dollar Princess in London and in the British provinces, then crossed to America to star in Ivan Caryll's Marriage à la Carte (1910, Rosalie) and as another fairly merry widow, Mrs Guyer, in Ziegfeld's remake of A Trip to Chinatown as A Winsome Widow (1912), ‘singing “Reuben, Reuben” as if it were the latest thing from France’. France? Pretty Miss Weckesser from Mannheim insisted to the eager press that she was Viennese ... "When they say I am Dutch it makes all my Viennese blood boil". I wonder why. 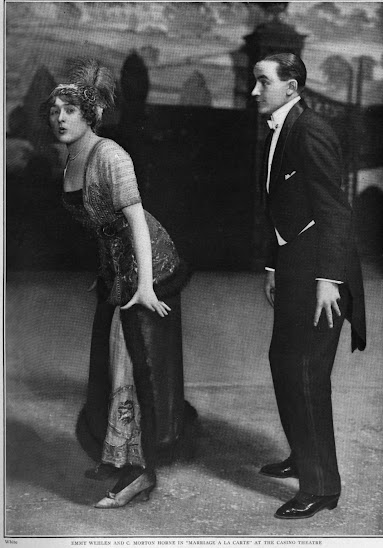 Scheduled for the star rôle in Broadway’s The Lilac Domino she dropped out with what was said to be appendicitis, and instead took the rôle of Winifred ('Freddy') in the German musical comedy The Girl on the Film both in London and then in New York, replaced Isobel Elsom as the heroine of After the Girl at the Gaiety Theatre, and then returned to America with the British company which played Tonight's the Night there in 1914. 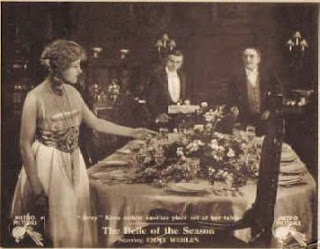 Denying even more strongly, now, her German nationality (her brother Max was in the German army), she remained behind when the company returned to wartime Britain, and she soon abandoned the musical stage for the silent screen where she became a favourite and much-publicised leading lady between 1915 and 1921. 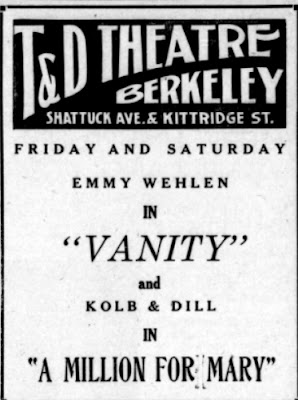 She made her motion picture début in Metro’s When a Woman Loves and appeared thereafter in such often slightly daring pieces as The Amateur Adventuress (`the story of a girl who wanted to know the meaning of the word life!'), the serial Who's Guilty?, Vanity, Fools and Their Money, For Revenue Only, Nine Tenths of the Law, Sowers and Reapers, The Duchess of Doubt, Lifting Shadows, The Pretenders, The Trail of the Shadow and The Outsider (`she determined to become an adventuress ... she succeeded beyond her wildest dreams!'). 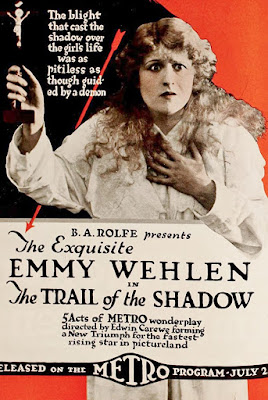 She then vanished from showbusiness annals, as Mrs Richard Averill Parke, wife of a well-off soldier and Olympic bobsleigh champion. The couple indulged in plentiful travel and Parke 'of Staten Island' died in Switzerland in 1950 of cancer and cirrhosis of the liver. Mrs Emmy Parke is said to have lived until 1977.

The Mannheim archives record Heinrich August Weckesser (d Mannheim 26 January 1911) and his wife Maria Luise Wilhelmine née Teghtmaÿer with 'dessen Tochter' Emma Louisa born 1886, rather than the 1888 she later inscribed on her passport. Perhaps because the date of Emmy's birth was a few months too close to her parents' marriage. 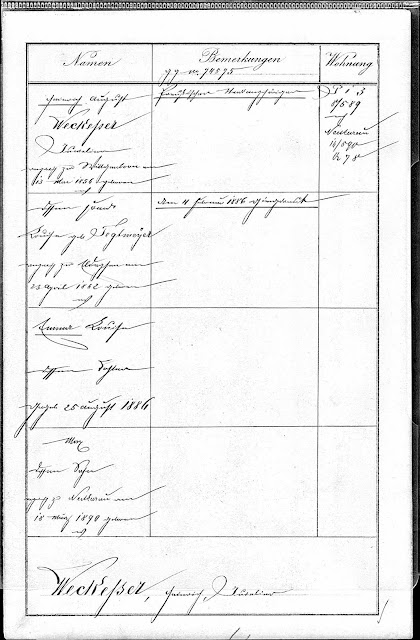 The American records seem to show her marriage in two places in several different dates between 19019 and 1921, but always to Mr Parke.
And her death? Said to be in 1977. But I haven't yet found out the when and the where. I assume America. Between their various travels, Mr and Mrs Parke lived at 160 E56th Street. Between 1953 and at least 1962, I see her in residence at the Hotel Surrey at 20 E76th. America had been her home base for over half a century, and after being German, pretendedly Austrian, and naturalised British, she had become American by marriage.
Post scriptum: Ms Irene Zweck writes 'Emmy Wehlen is my aunt and she died 1 January 1980 in New York'. So I guess she did!
So we nearly have the vital statistics sorted. Nearly.  As for the career, there were probably more, ephemeral moving pictures in those busy, starry years during and just after the war, and there will be a few more theatre credits hidden in the Stuttgart and Berlin newspaper archives, but I think we have the backbone assembled. 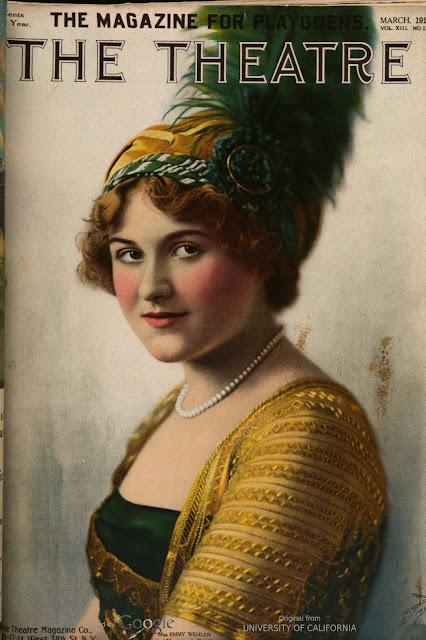 The beauteous Emmy spawned hundreds of photographs and postcards, decorated many a magazine cover and page three interview or theatre column, but although her career was not a long one, it is fun to see her image develop from that of a lively young leading lady, as in her German 'wunderhübsche' years 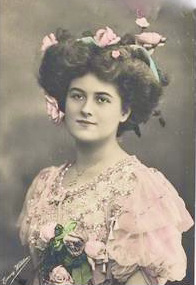 and her more porcelain English years 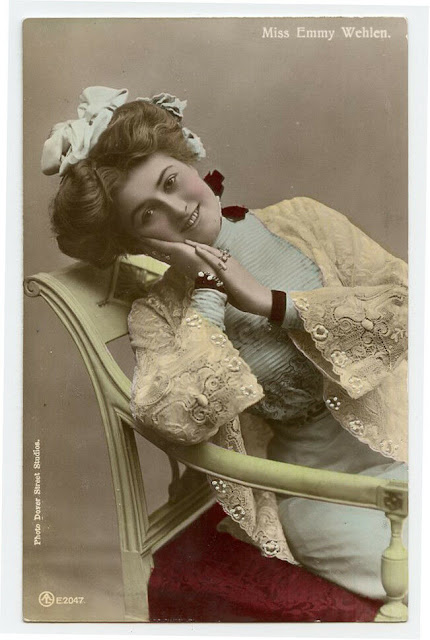 to the sophisticated 'adventuress' of a few celluloid years later 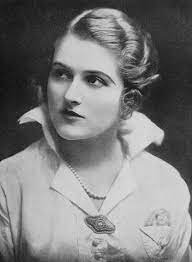 Post scriptum: Chris Zwarg writes that 'Miss Wehlen recorded about twenty sides for German Zonophone (plus a solitary German Edison cylinder) in 1907 and 1908. All of them are inordinately rare, both because of two world wars having bulldozed over humble cultural artifacts such as these, and because popular music was not considered very collectable for too many decades. Interestingly, besides excerpts from the Thalia-Theater pieces she appeared in, she also did a few cover versions of Massary's Metropol-Theater "hits" of the day, and a parodistic medley (to funny words by Henry Bender) on Die Lustige Witwe.' 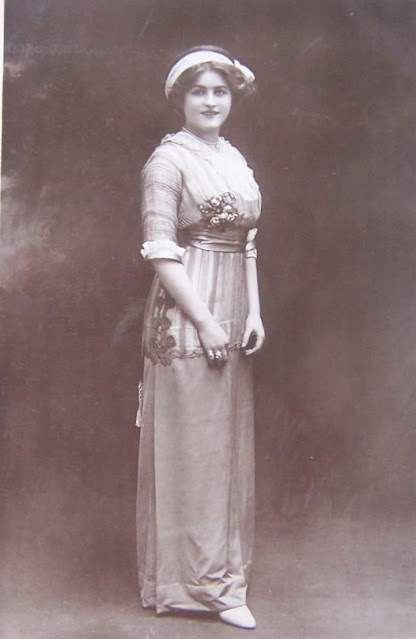