A silent musical comedy: A Trip to Chinatown

Todays little treasure from ebay, from the shop of continentalcollectibles ..

A set of studio stills from the silent -- yes, silent -- film (1926) based on the musical comedy hit A Trip to Chinatown. 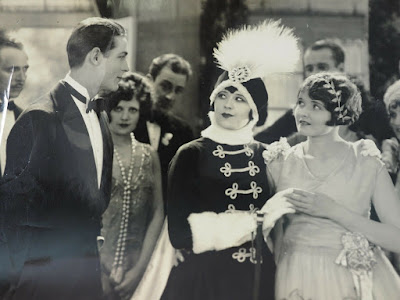 A Trip to Chinatown rates arguably as the most popular American-made show of the 19th century. As far as statistics go, it had the longest single Broadway run of any home-bred musical show -- 657 straight performances in its initial New York run in 1891-3, not counting a return visit of seven weeks in 1894 (Madison Square Theater, 12 February) -- but it was its additional and widespread life as a touring piece, both in America and abroad, which made it such a phenomenon. In fact, the show took its time to come to Broadway. It was first produced a whole year prior to arriving at the Madison Square Theater, and it made its real first New York appearance as part of those 12 months of touring when it was played, as a stop on a regular road schedule, at the combination house known as the Harlem Opera House (8 December 1890) with Anna Boyd and Harry Conor in its featured rôles.

A Trip to Chinatown was one of those loose-limbed farcical comedies with often haphazardly introduced, and intermittently replaced, revised and moved-around songs and dances which had become highly successful in the popular American theatre in the second half of the 19th century. Its author, Hoyt, the most generally skilful practitioner of this chimeric kind of low-comedy-plus-variety-show entertainment, had a series of successes with like pieces, but in A Trip to Chinatown he brought together a splendid bunch of comical characters in a simple and hilarious, if derivative, plot which, decorated with several very successful nearly new songs, made the entertainment into something more than the run-of-the-mill farce comedy.

The basic story of the show (much embroidered upon as the years went by) had two young men and their girls (Mattie Hornby, Irene Murphy) ostensibly going out on a `trip to Chinatown'. As in Labiche and Delacour's famous Voyage en Chine, they don't actually go there at all. This cultural(!) trip is a blind for the benefit of strict papa, Ben Gay (George A Beane jr), and the young folk are really off to have a high old time at a dance. They are, however, nice young people -- in spite of the boys being called Rashleigh Gay (Louis Finniger) and Wilder Knights (Ed S Metcalf) -- and they are taking a chaperone with them, a pretty widow called Mrs Guyer (Lena Merville). Unfortunately Mrs Guyer's letter arranging to meet the young folk at the ‘Balloon’ restaurant goes to Ben by mistake, and the old fellow hurries off excitedly for this unlooked-for rendezvous with a charming lady. At the restaurant he ends up both lady-less and then embarrassedly unable to pay his bill as the comedy gambols on towards a forgiving and happy ending.

The other, incidental characters of the piece were headed by a variant of another favourite stock character, the imaginary invalid, here called Mr Welland Strong (Harry Conor), `a man with one foot in the grave'. Strong's rôle developed, eventually, into the major comic part in the show, alongside humorous vignettes from such supporting characters as the regularly crushed servant, Slavin Payne, (pronounced `slayv-in', of course) (Harry Gilfoil), Flirt the maid (Ollie Archmere), the lad Willie Grow (`proposed at the Bohemian Club' ... and played by a girl) and Noah Heap, the waiter at the Restaurant (also Gilfoil).

The songs were, in the tradition of such shows, movable and changeable, but a number of those in A Trip to Chinatown became such favourites that they remained a fixed part of the show over the many years of its life. Percy Gaunt's `Reuben and Cynthia', `The Pretty Young Widow' and `On the Bowery' (to the old English tune, ‘Down in the Coalmine’ aka ‘The Harem’), all originally written and/or arranged from familiar melodies for the show, were the backbone of a score which, towards the end of the show's third year read: Act I: `The Pretty Widow', `Out for a Racket', African Cantata: `Love Me Little, Love Me Long', `Crisp Young Chaperone' (mus: Barton); Act II: Trio -- burlesque of Italian opera; Medley including `There Will Never Be Another Like You', `Naughty Sporty Boys', `I Will Be True', `Reuben and Cynthia', `Amorita Waltz', `Whistling Extraordinary', `You Did That'; Act III: Toe dance and Flower girl by première danseuse, `On the Bowery'.

`Push Dem Clouds Away' was a popular early addition to the score, but it was a slightly later one, a number already seen in another production, which proved the biggest success. Charles K Harris's `After the Ball' became, along with `The Bowery' (which Hoyt, who claimed to have written 400 to 500 extra verses for it, averred had been `heard in America, England and Australia ... translated and sung in German, French, Italian, Danish and Swedish [and is ] now the rage in St Petersburg') and `Reuben and Cynthia' (`Reuben, Reuben, I've been thinking ...'), one of the enduring elements of the show.

Hoyt covered his show with a programme note attempting to defuse any attempt to see sense in the entertainment: `In extenuation, the author begs to say that whatever the play may be, it is all that is claimed for it'. He also claimed, second time into major dates that `playwright Hoyt has made many alterations to his skit, adding new and witty lines here, and unique business there, until the Trip is almost a new play'. Whilst undoubtedly an exaggeration, it is certain that alterations and additions came with a will. The largest alteration came after Hoyt's death when a whole new version of the piece entitled A Winsome Widow was produced by Florenz Ziegfeld in 1912. It was a singular flop.

In Britain, the show was pre-empted by Johnnie Sheridan’s swiftly re-titled A Trip to Chicago (ex Bridget O’Brien Esq, Vaudeville Theatre 5 August 1893) but, nevertheless, when the real thing arrived its pitch was not spoiled. Played with a local cast headed by R G Knowles, Herman de Lange and Edith Bruce, A Trip to Chinatown had a good 125-performance run at the tiny Toole's and the larger Strand Theatres (with Alice Atherton now as Mrs Guyer) and a very long touring life around the British provinces. Australia did not, on the other hand, cast the piece locally and, in fact, saw the show with some of its original creators when Hoyt sent a company to the south Pacific in 1896. Harry Conor, J Aldrich Libby (Rashleigh), Frank Lawton, Amelia Stone and Bessie Clayton played the show in repertoire with Hoyt’s A Milk White Flag in Sydney, Adelaide and Melbourne (Princess Theatre, 29 August 1896). Australia later got the Trip to Chicago piece as well, billed as the work of Fred Lyster and its star John F Sheridan (Theatre Royal, Melbourne, 15 September 1900) who trouped it a while in his repertoire alongside his more favoured pieces. 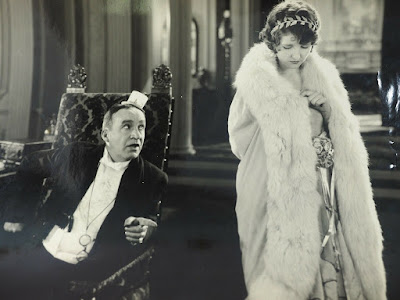 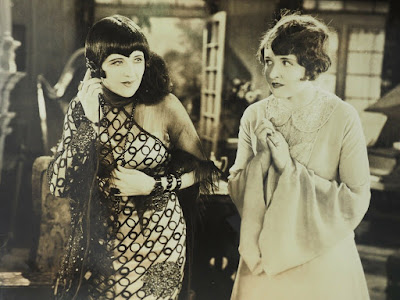 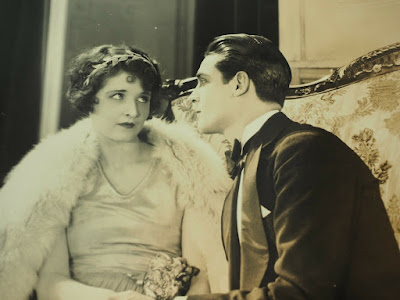 It seems that one named Beatrice Van had a fair old go at the text in compiling her 1-hour screenplay reduction, but the 'merry widow', Mrs Guyer was still the star of the affair as portrayed by Margaret Livingston (Mrs Paul Whiteman). Charles Farrell was the two juvenile men, here seemingly rolled into one and christened Gay Wilder, and the favourite comic character of Welland Strong was retained, as played by Earle Fox, and Slavin Payne was Wilson Benge.  Father Ben Gay seems to have metamorphosed into Ben Strong (J Farrell MacDonald), and the ingenue in the affair, christened, burlesque-style, Marion Haste, was portrayed by the soulful-eyed Gladys McConnell. Miss McConnell seems to have done well with the photographer, but not so well in the decided erratic billing! 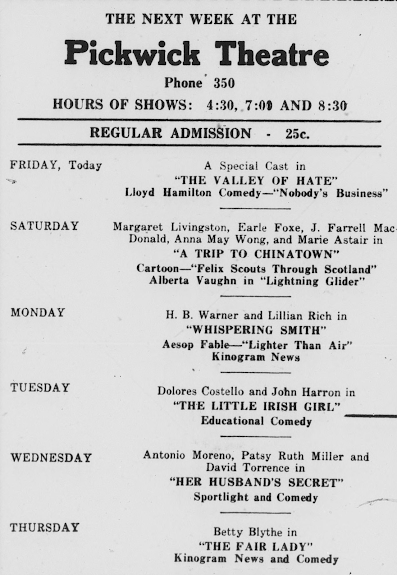 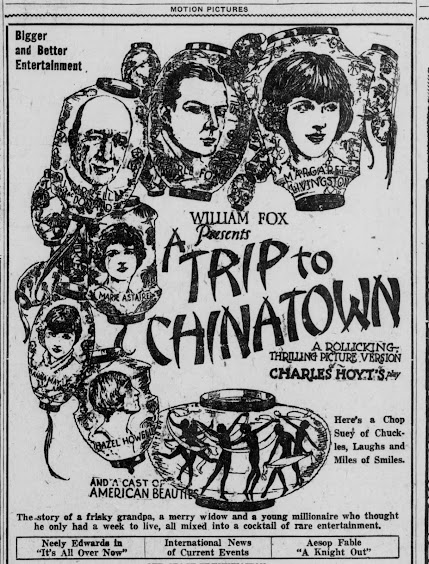 Some of the incidental comic characters seem to have got lost in the transition to screen, but Norman Blood (Harry Woods) and Rose Blood (Marie Astaire) were there along with a character named Ohati, which seems to have been designed to create a role for 21 year-old Anna May Wong. 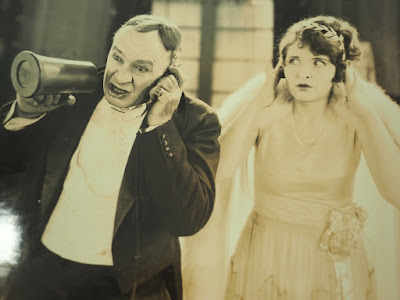 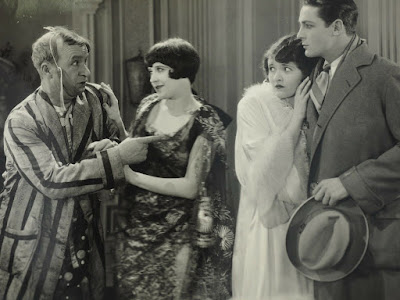 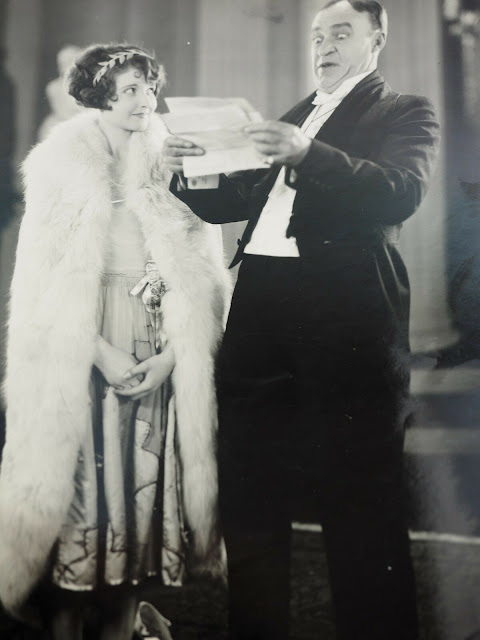 I see on the Movie Database that the film is said to be lost. What a shame! But at least these photos survive.

Posted by GEROLSTEIN at 3:54 PM