A little lady from Hobart, Tasmania

I am always curious about the folk who lived in New Zealand and Australia in 'pioneer' days, and after my happy experience delving among the Ellises of Collingwood, I looked around this morning. And I found this little lady ... 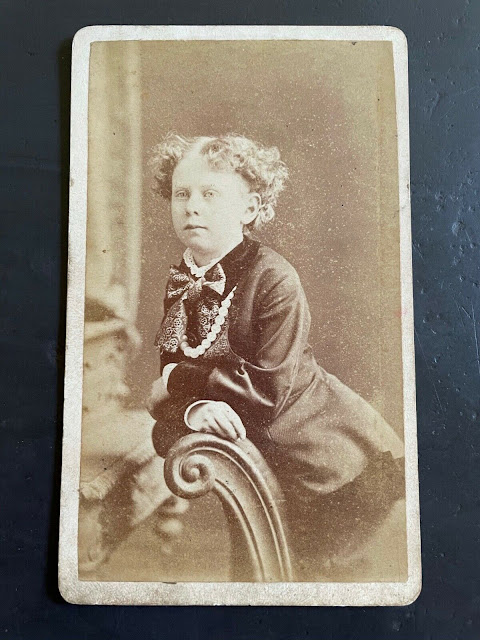 I think mother's fashion sense was a bit off. It looks as if the peddler-man had been by, selling beads and bows. Hair ribbons might have been more useful. Well, I guess this was colonial Hobart, but mamma was a English-born colonial vicar's daughter.

Yes, I identified the lassie very quickly. A quick estimate of the age of the photo -- late 1870s? -- a quick look at the Hobart birth registers ... Her name was Sarah Rachel SHIELD and she was born in Hobart 29 April 1867. Father: Rippon Shield. Mother Elizabeth Hawley née Barnett. 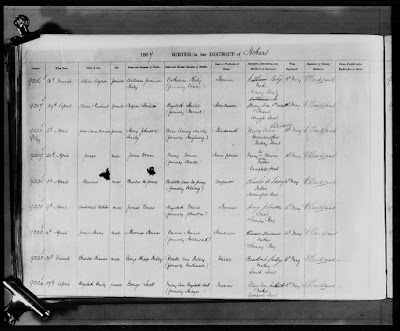 Well, this is going to be a doddle, I thought. Even if mother seems to have been married under two different names. A father named 'Rippon'? Anyone who knows anything about Tasmanian history knows of Rippon Shield: he was a South Shields stonemason who emigrated to the colony in 1853, and to Hobart in 1856, and there became a prominent builder of public buildings.

Wrong. Wrong? But Rippon Shield, stonemason, from North England, born 1822ish ... you can't tell me there were two of them, who both emigrated to Hobart in the 'fifties, both worked as builders ... Oh, yes, you can.
The name of Rippon Shield goes back for generations, and, as such names are, was handed down through sons and sons of sons: Rippon born 1769, Rippon born 25 April 1798 ... and these guys had multiple sons, who named their sons 'Rippon'. And so we have the situation of one Rippon being born in South Shields (father: John, bapt 27 January, b 1822) and another in Newcastle (father: Edward, bapt 24 November, b 1822). Anyway, Rippon (1) appears to have arrived in Brisbane on the Caroline 1853,  before progressing to Hobart. Rippon (2) came the following year ...  And they weren't the only members of the Shields family to head for Tasmania, others followed. Some stayed.
Anyway, Rippon (1) is the well-known one, Rippon (2) 'of East Cramlington' is our man. And, yes, the family historians have muddled the two up hideously!
Son of Edward Shield of the Cramlington Colliery (stonemason), who built the local Methodist Chapel and preached therein, and his wife Isabella née Chicken. He can be seen in the 1841 census in Blyth, then in 1851 with his new wife, Mary Anne née Athey 'of Windy Nook, Gateshead. And a couple of years later they set sail south. It was a tragic trip: Mary Anne died on the voyage (22 November 1854) and their baby, Ann, soon after Rippon's arrival in Geelong 23 January 1855.

The widower headed on to Hobart 'Rippon Shield junior, New Town, Hobart, builder'. Seems that both the Rippons benefitted from something called an 'immigrant bounty ticket'. Nowaday you have to pay heaps to buy property, as a foreigner, in Australia: in those days, they paid you!
Rippon (1) became a civic worthy, Rippon (2) is less in evidence. I see both of them at the foundation-stone laying of the Seymour of the coal-mining company's fire-clay works on which both men were engaged in the construction. Just like home!  Rippon (1) was a thoroughly married man and multiple father, Rippon (2) aftermore than a decade of widowhood, had remarried (Hobart, 12 January 1864). The marriage was registered, but ... well, the lady in question, née Elizabeth Barnett, daughter of the now late Rev William Henry Barnett, had been previously married, to one William Hawley, seemingly a local stationer, and sported a large number of offspring. I haven't followed them, or her extant husband up, but neither do I find any divorce. But this is Tasmania, and as Ive found in other cases -- including the famous Alexander Henderson one -- things could happen (or not happen) down there which the rest of the world couldn't disprove.
Rippon (d Alpha Road, Willoughby 10 June 1898) and Elizabeth (d 5 November 1892) had two daughters: Ethel (1864, Mrs Sims, Mrs Parker, the odd scandal) and Clara Rachel ... so here we are!
Things get less complex now. Clara married Mr William Macrow, son of Albert Owen Macrow (d 1927) of the merchanting company of A Macrow and Son and Miss Belinda Colina née Fairburn. Ah, yes, Macrow's Furniture Shop 106 Charles St. Mr William Macrow had social ambitions and Clara went too. All the right afternoon teas and fêtes.
They had five surviving children, three daughters who married as papa wished -- Ethel Colina married a Circketer, Vernon Ransford and made the news -- a fourth who didn't (Frances Elizabeth ka Bobbie), and one son William Reginald Fairbarn Macrow, whom I see serving in Egypt in WW1.  Papa disinhertied Bobbie, who stayed at home with mother, allegedly because she wanted to take a job, and papa found that injurious to his social status. His executors and the courts reconstitued her 'rights' and gave her a tidy annuity. 'Bobbie' sounds interesting. 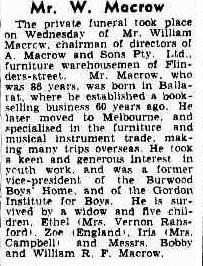 I say! The family started off with a Miss Chicken and ended up with a Ma-crow ...
Enough for today. Enjoyed my trip to Hobart. And the Yamba sunshine. And the gentle sea breezes. And the quiet ... and here I am at 5.30pm with my iced chardonnay, the waves crashing sonorously over the rocks, thinking 'to where shall I voyage tomorrow"?
And, please, family historians ... untangle the Rippons in your trees (74 of 'em! on ancestry!)
PS, I see the family who stayed home had the odd tragedy, too: 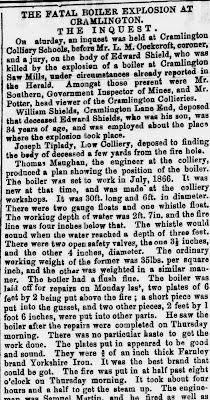