A bit of fishy identification

I blogged this little item some while ago. But recently it has attracted a curious number of daily hits. I have been through this before, when hundreds of Russians suddenly evinced an interest in oldtime actress, Nellie Bromley. So I shifted Nellie ... and Russia lost interest.  Now I am shifting this fishy tale ... and, yes, it worked!

"Ebay is great fun. And there are treasures to be found thereupon. However, it is clearly run by a machine: there is absolutely no attempt to make sure that vendors label their goods correctly. Today has been a day of particuarly hilarious idiocy from one of the usual suspects. 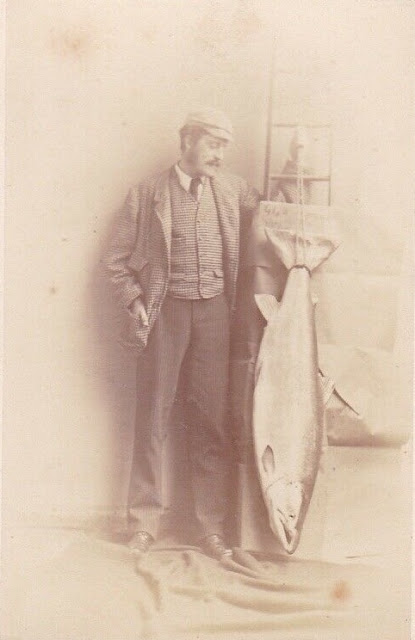 No fishmonger, or any kind of monger, this gentleman. This is the Honourable Charles Arthur Ellis (b Lisbon 1839; d Shottermill 30 March 1906), lifelong-bachelor son of Lord Howard de Walden, traveller, big-game hunter, the builder of Frensham Hall in Shottermill, Surrey, sometime (occasional?) barrister, socialite  ... and related to all sorts of titled folk. He left his vast fortune to his niece (?), Janet Countess of Cawdor.
I'm sure he is documented all over the place, but just a wee message to ebay. He wasn't a fishmonger.
Postscriptum: and here is a photo (without a fish) of his younger brother, the Hon Evelyn [Henry] Ellis (b Gibraltar 9 August 1843; d Plymouth 5 September 1913). He is said to have introduced the first motor car, a Panhard and Levassor 4hp, to Britain, and was one of the country's first 'automobilists'. His obituary, more guardedly, says 'one of the first', but the first to give King Edward a ride. However, the newspapers of 1895 give the Hon Evelyn 'the distinction of beig the first to 'tool' a petroleum-propelled dogcart in this country'. 'Starting from Michelover for Datchet , Mr Ellis covered the distance of 56 miles in five and a half hours ... unmolested by the local authorities ..'. Ah, but when you are related to a peer ... 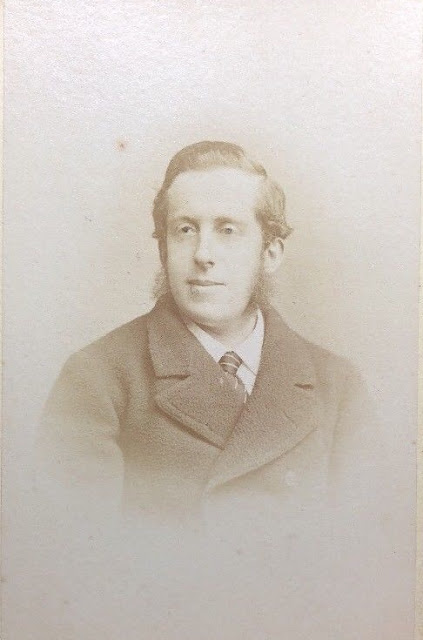 Strange that these two photos should appear at the same time. They seem to have been inscribed by the same hand, too. Is Mrs Howard de Walden having a clean out of the attic? But the vendors of the photos are situated half a continent distant from each other ..."
Posted by GEROLSTEIN at 8:48 PM