A Manhattan Mystery, or Who Do You Think You Are?

All historians secretly love a good mystery. But we love it infinitely more when we are able to solve it, in spite of varying efforts to put us off the track. I think, in this case, I reckon I'm worth I'm a nine and a half out of ten. I'm pretty convinced I'm right, but when actors and the theatre are involved, with all the untruths about name, age, marital status and, even occasionally, sex with which they surround themselves ... well, it's just that more tricky (a) to decipher and (b) to be sure. 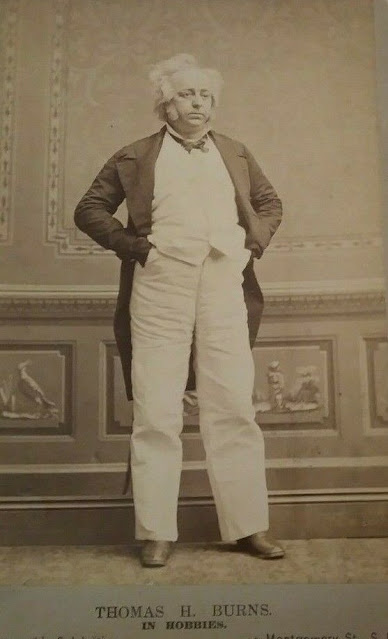 I know about Hobbies. It was a loose-limbed, 1-act, 2-hour farce comedy, tacked together by Ben Woolf from Boston -- the librettist of America's first international musical-theatre success -- around the popular comedian and impersonator Nat[haniel] C[arl] Goodwin, his new wife, ex-Lydia Thompson star, Eliza Weathersby (actually Smith) and her sister, Jennie. Eliza was the soubrette, Minnie Clever, Jennie found her fach as the komische Alte, Miss Euphemia Bangs, and Nat was principal man, Professor Pygmalion Whiffles, in what was simply a ‘let's put on a show’ show, and the piece culminated with the ‘amateur’ performance of a burlesque Puss in Boots.
Hobbies was, however, a six-hander, and Messrs W G Bowser and W J Stanton and Miss Clara Fisher made up the original 'Froliques' company, but the supporting players changed regularly as the piece covered the country, and one of the take-overs in the role of Major Garroway Bang was the 34(ish) year-old comic actor 'Thomas H Burns' (b ?1845; d New York 14 December 1905).
Burns (and we'll get to the quote marks later) was a thoroughly experienced young man. He had been on the stage from at least 1865, as a member of the companies at the Boston Theatre, Selwyn's Theatre Boston, at Providence, the Boston Howard Athenaeum, the Boston Globe for more than a dozen years, supporting stars such as Frank Mayo, Kate Regnolds, Katie Putnam, E A Sothern, Christine Zavistowski in pieces ranging from The Rivals, Virginus, After Dark, The French Spy, A Hornet's Nest, Rip van Winkle and Romeo and Juliet to a burlesque Robin Hood (he was Maid Marian), and getting his moments as Shaun in Arrah-na-pogue, as Handy Andy, The Limerick Boy or Paddy Miles's Boy. I suspect him of being Massachussetts Irish! 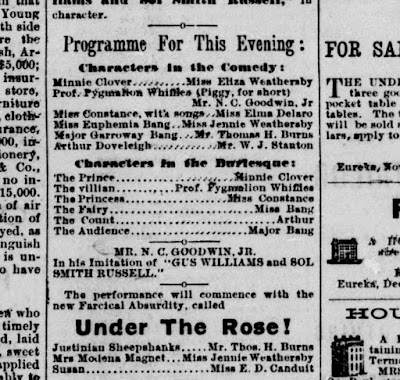 After his time with the Froliques, he played several seasons more in Boston. I see him supporting Maud Granger in The Galley Slave, as lawyer PH Stitch in The White Slave and playing in a version of Jack Sheppard, with Rachel Noah as Jack and a little lass by the name of Geraldine Ulmar as Winifred Wood. Miss Ulmar would, of course, go on the stardom in Britain as the creator of Gilbert and Sullivan's The Gondoliers, The Yeomen of the Guard et many al. 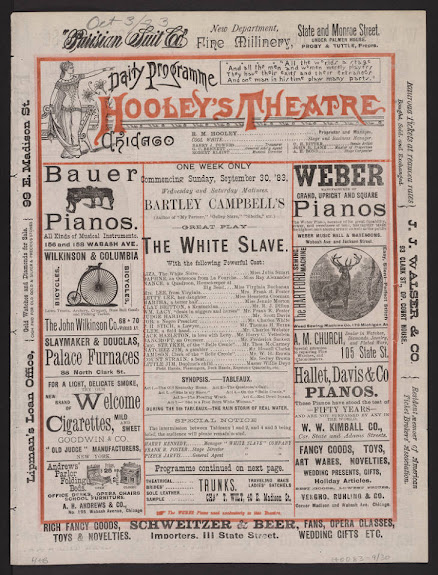 At some stage in the mid-1880s, now more of an age to play the roles he was cast in, Burns joined Marie Aimée's troupe playing des Prunelles in Divorçons, T Tarleton Tupper in Mam'selle and apparently directing the stage as well. He was debited with the direction of the three-performance flop Marita which the lady quickly abandoned.
Now, however, in his forties, his credits were much classier than heretofore. Nat Goodwin recalled him ('full and round in voice and person') to play Captain Medway in Turned Up and Wilson in A Gold Mine, he supported Minnie Maddern in Featherbrain, played Captain Knox in Belasco and de Mille's The Charity Ball, with Charles Frohman's Comedians as Major P Ferguson Mallory in Mrs Wilkinson's Widows. In 1899 he toured with Rose Coghlan, Grace George, Aubrey Boucicault and John T Sullivan in Mademoiselle Fifi.
In 1905, Tom Burns was engaged to play the part of Mr Trent in William Gillette's new play. But Clarice was produced at London's Duke of York's Theatre. So to London went Tom. He was 'a distinct hit' but Clarice was a flop, so Gillette canned it, and switched back to the proven Sherlock Holmes for the remainder of his tenure. And in December the company went home. The shiplist details them all: 'Marie Doro' (née Stewart), Lucille La Verne, who had been playing a black mammy and would go on to voice-over fame (Snow White etc), director William Postance, Gillette ... but where was Tom?
I found him. Tom had gone home earlier, and arrived in New York 25 November. Was he not in Sherlock Holmes, or was his return due to something more sinister? The day, 14 December, that the ship bearing his colleagues berthed at New York, Tom Burns died. Aged 61. I can't find an obituary anywhere. I'm sure there must have been something in the trade press ... after all, his death was registered in his stage name.
Now the mystery part. Was it a stage name? I say yes. I can find Tom in only one census, as 'Burns'. In 1900 he was living in East 17th Street avowing born Massachussets May 1846, of Massachusetts parents, and widower. So where was he in the others? Doubtless using his real name? I wonder.
What is true, is that he was a widower. The lady concerned was born Ellen Marie Sherman, in Concord, NH, and at some stage a vanity publication, apparently written by a relation, made an attempt to glorify her as a writer. The piece has been copied (on findagrave even!) verbatim and much of it is a load of irrelevant codswallop. 'Poet .. born 1850'. Nellie Sherman was born in 1835. 'She is a daughter of Dr. Newell Sherman, of Waltham, a descendant of Rev John Sherman and Mary Launce, a grand-daughter of Thomas Darcy, the Karl of Rivers. The family came to America from Dedliam, England ...'.   Well, there is no such place as Dedliam (I guess Dedham, Essex, where the General Shermans came from is meant), and Thomas D'Arcy, first Earl of Rivers flourished 1565-1640. Mary Launce (1625-1710) and John Sherman were wed in 1647 and had fifteen children ... fifteen multiplied by umpteen generations? Makes how many descendants? Mother's name was Nancy Kimball and she was 'of the Brights and the Bonds of Bury St Edmunds'. Who? Well, I guess this was Boston, and if you could squeeze a drop of aristocratic blood into your background ... alas, it did Nellie no good. 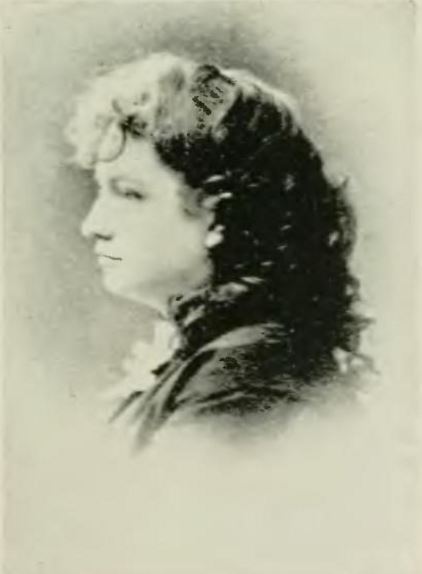 The article scurries over her 'achievements'. She had been in the dramatic profession. You bet she had. She married Thomas H Burns 'the actor' 'in 1878'. I don't think so.
Fact, She was one of the four children of Newell Sherman, dentist, and his wife Nancy née Kimball. We can see them all in the 1850 census of Waltham. And on 22 September 1855, Nellie married a young printer named Albert G Moore (b 15 November 1835) son of Amory Moore and his wife Merina ...
But Albert didn't remain a printer. He went on to the stage. And for the occasion, he adopted the name 'E M Leslie'. And alongside him 'Mrs E M Leslie'.
Albert had a successful career as a performer, and latterly manager, in the Boston theatres, until his untimely death 22 September 1873, at the age of 35.
Since 1865, the young Mr Burns had worked alongside the ten years older 'Leslie's. And, it seems, he married the widowed Nellie. In 1878? Well. Facts.
(a) On 11 February 1876, the widowed Ellen Maria Moore married Thomas Glennon, aged 31, actor, born Brooklyn
(b) Mrs Thomas H Burns is billed in the Boston theatres in early 1878 ...
So, she married two actors named Thomas, both born in the same year, in the space of a year and a bit?
It is my theory that Mr Glennon was, in fact, 'Mr Burns'. I can't prove it, but I'm damned sure I'm right.
Nellie 'retired from the stage at her marriage' (well, not quite) and apparently penned verses in her spare time. She died 16 June 1897 at the couple's summer home in Kittery Point, Maine. 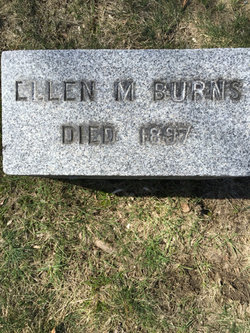 So, there we are. Would somebody please burn any remaining copies of A Woman of the Century by cousin (?) Willard ... and let's get back to a bit of fact.
Posted by GEROLSTEIN at 8:55 PM