Being old has its advantages. Being old and having spent forty years dabbling in the same pool -- in my case, theatrical history -- has more. Yesterday was an example. I am not one of those fortunate folk who can listen to a song and say 'oh, that's such and such a singer'. With photos I am a little better ... at least I can often say 'I KNOW that face', even if I cannot put a name to it.

Well, yesterday, amid a bundle of wholly non-theatrical pictures, I came upon this young lady.. 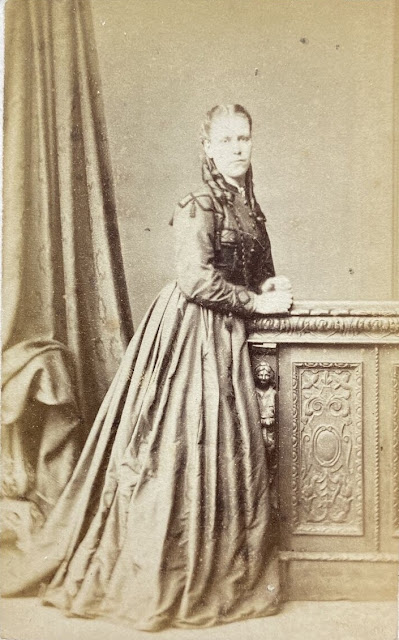 Ah. Yes. Now who are you? I turned the card over. 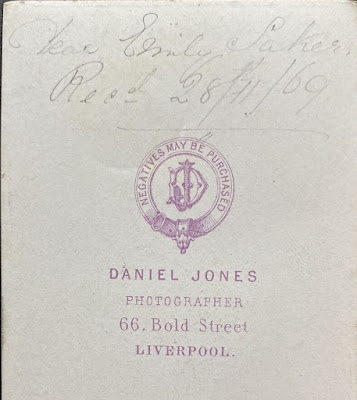 Saker plus Liverpool = theatre. Edward Sloman Saker, manager of the Royal Alexandra Theatre, Liverpool, married his leading lady, Emily Mary Kate O'Berne or O'Brien ... yes, that's she. Never seen a photo of her so young ... 1869? She'd be 22. BUT. She was still 'Miss Marie O'Berne'. She didn't become Mrs Saker until 16 February 1874 ... in fact, in 1869, she hadn't even met Mr Saker! Retrospective labelling? How would you remember the date 'received'? Odd. Someone's birthday, perhaps? I don't know Emily-Marie's birthdate. She was born in Dublin, allegedly to a John O'Berne or O'Brien 'printer' and his wife Elizabeth in 1847ish.

At some stage in her youth she emigrated to the mainland, and I see her performing first in Liverpool in April 1864. So, aged seventeen? Now, I'm not going to detail the distinguished performing career of 'Mrs Edward Saker'. That has been done, with the accent firmly on the glory days of the 1870s and 1880s. But I will just set the record right as regards her rather remarkable early career, which usually gets glossed over.
'Marie' as she was known for the stage turns up in the aforesaid April singing at the Star Music Hall, in Williamson Square, on a bill including 'Handsome Nigger Joe' otherwise W H Wieland. The Star was a venue that catered for 'men only', and Marie seems to have been one of only two ladies performing there. I imagine the beer flowed. 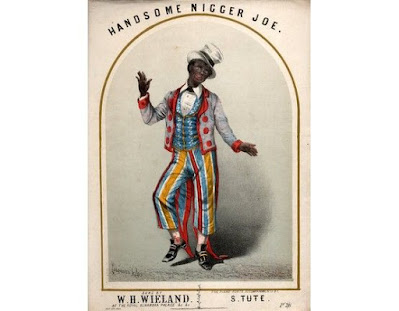 In the months that followed, I see her singing at Hardy's Music Hall, at Pullan's fine house in Bradford ('ballad singer and serio-comic') and in 1867 at the Constellation Music Hall, 74 Whitechapel, Liverpool and the Dog Inn Music Hall. There were obviously others such in between.
Promotion, however, was soon to come. In August 'the new serio-comic' made her London debut, for Sam Adams at the tatty Philharmonic Hall, Islington. The other vocalists were the considerable soprano known as Charlotte Grosvenor, and 'Mrs Badzey' otherwise Mrs Grundy, an experienced stalwart of the halls who was to mother a whole breed of singing Grundys. Marie was in good company.
She seems to have stayed in London, and during that time made several appearances, as an actress, with the social and military amateurs out Woolwich way. And then came the announcement. Phelps was to open the new season at Drury Lane in a version of the Walter-Scottish The Fortunes of Nigel entitled King o'Scots, and among the cast was to be ... 'Miss O'Berne'!
Well, it didn't happen quite that way. When King o'Scots opened, Marie was in Hull, a member of the stock company at the Theatre Royal. But it was only a 'holding' job. After she had played 'Advenure' in the Christmas panto, alongside Cicely Nott and Edith Blande, she headed for the London and the Lane. She had clearly been hired as a 'singing lady', for she was cast as Second Singing Witch (the first was Elizabeth Poole!) to the Macbeth of Phelps, and the famous 'double' of Mrs Howard Paul (Lady Macbeth and Hecate), she was Mrs Circe in Burnand's afterpiece, The Girls of the Period, Madame Valjean in Les Misérables, and when Hamlet was staged, for Phelps, she was Ophelia! And when that season was over, she tootled off to Edinburgh to play Abdallah in Ali Baba over Christmas. So, I imagine, the carte was sent to whomsoever inscribed it, from Scotland...
Miss O'Berne's versatility however, was soon to have a further test. Mr Wood's Italian Opera company came to Edinburgh, and among its offerings was the then not very popular Der Zauberflöte. Ilma di Murska was the Queen of the Night, Clarice Sinico was Pamina, and for the first Knabe was co-opted ... Miss O'Berne! The opera company headed for Liverpool, and there Marie climbed off the operatic wagon.  She went to Eldred at the Prince of Wales's Theatre, where she appeared in the star-vehicle musical playlet, Perfection, supported by Billington, Sydney Cowell and Harry Paulton, and thence, in September, to the city's Alexandra Theatre, manager: Edward Saker.
And the career of Emily O'Berne as a leading actress, and a few years later a wife, a theatre manager and all the rest was on its way ... Mrs Darlington in Love or Money, Fanny Power in Arrah-na-pogue, Princess Ida in W S Gilbert's burlesque The Princess, Lady Adeliza in Birth, Mary Meredith in Our American Cousin with Sothern, and onwards and upwards. 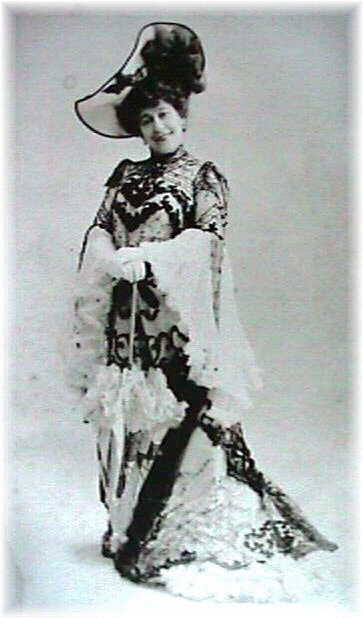 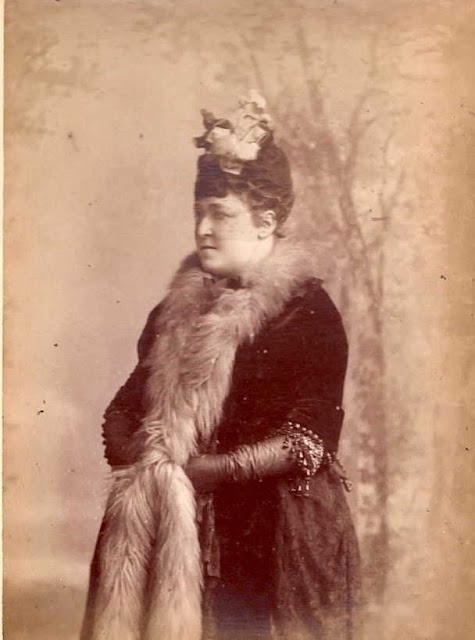 Edward and Emily had four sons and a daughter before Edward died 29 March 1883 at the age of just 44. One son died young, and two were killed in the Great War, but Emily didn't have to suffer the loss. She, herself, had passed on 6 February 1912.
Eldest son, George Morton Saker worked as a touring musical for musical comedy, from The Shop Girl to No, no, Nanette and on the halls, notably for George Formby, lived to 1966, wed, but bred not, and it was left to daughter Marie Rose to keep the family line alive, even if possibly illegitimately. Marie 'actress' seemingly gave birth to a child, Agnes, surnamed Pearson, in Hull in the latter months of 1900 ...

There is much more to relate concerning the history of the Saker/O'Berne family, but I'm stopping here, my mission -- to put this photo in context -- accomplished ...
Just one animadversion ... that name? Would you sign your wedding certificate with anything but your correctly-spelled name?

It is so sad no 1861 and 71 Irish censuses survive. Destroyed by the government, and in 1922 a fire destroyed the Four Courts building where the PRO was.