Italian History: A 'Revolutionary' in ... Doncaster!

In the same box as Mrs Saker, I came upon another photo which grabbed me ... a fine-looking gentleman from ... 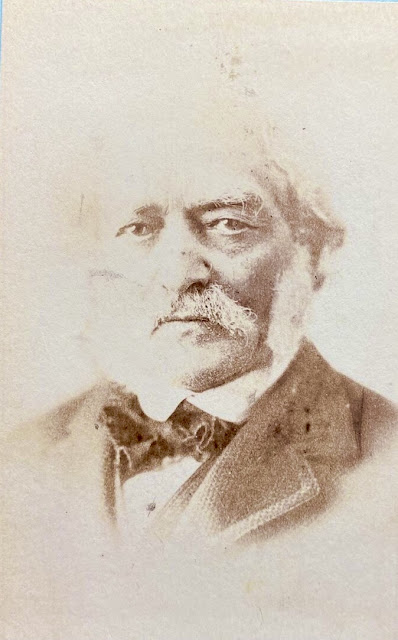 Turn over the card and somebody has posted a newspaper clipping on the back. 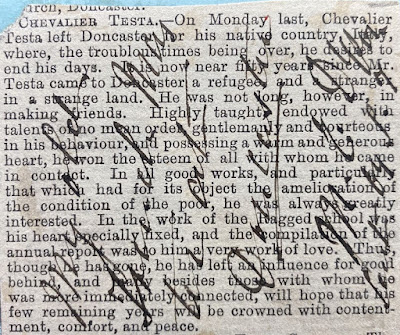 How nice. Clipped by one M E Dyson in 1881 'my old French master at Doncaster'.  But that is only a fragment of the story of this gentleman who lived, in fact, more than fifty years in the town of Doncaster.
Giovanni Battista Testa was born in at Torrione, near the town of Trino, in Piedmont, 13 March 1798 and educated for the law. Barely into his twenties, he got mixed up in the local 'liberal' revolution promoted in 1821 by the usual sort of group of army officers -- an attempted coup d'état which, after a few posturings and an ephemeral 'liberal government' was squashed, and its leaders and noisier sympathisers condemned to death. They, needless to say, scooted out of Piedmont to hopefully friendlier pastures.
I don't know exactly what 23ish year-old Gibi had done to get himself on the proscribed list -- apparently he was on some kind of council --, but he was condemned (I suspect in absentia) in late 1821, and the friendlier pastures he chose to which to scoot were first Geneva, then London, and then -- don't ask me why -- Doncaster, England! He stayed there, living, unmarried, at no3 Christchurch Terrace, with the family of publican Ann Wright, and later nurseryman Thomas Wright, writing (Italian) history works, and teaching Doncastrians Italian and French into his eighties, before returning, at the last, to Italy. He died at Casale 16 February 1882. 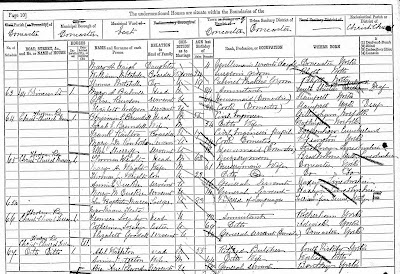 His history books are said, a century and more later, to be models of their kind ... but I suspect politically slanted (I Martiri della Libertá Italiana). I wonder what his large-cast, Italian verse tragedy Olgiati published in Doncaster in 1827 was like .. and what about L'institution del Sabato (1855)?
He re-published his 1853 History of the War of Frederick I against the communes of Lombardy (2 volumes) in English ('by Giovanni Battista Testa of Trino, Knight of the Order of SS Maurice and Lazarus and of the Crown of Italy, and corresponding member of the Royal Delegation for the Study of National History') in 1877. 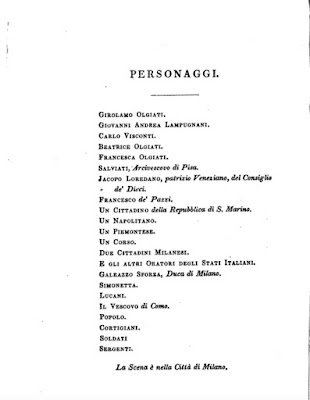 Anyway, a more detailed version of Testa's life can be read (in Italian) on the Trino website (Trino negli anni del risorgimento):  https://www.comune.trino.vc.it/articoli/giovan-battista-testa
It doesn't have a portrait of the man. Maybe they would like this one?
PS Miss Mary Elizabeth Dyson (b 19 December 1833), daughter of a carrier (employing 35 men) and rope-manufacturer from Almondbury, Huddersfield, attended Miss Sarah Parker's school in South Parade, Doncaster c1851. She is numbered among the pupils there in the 1851 census. Unmarried, she lived, latterly (see 1881 census) in Brighton with her brother, Herbert ('merchant').
An odd, quiet life, rather at odds with his earlier Italian indiscretions. Perhaps it was what he really wanted. Perhaps his politics were theory rather than pratice. You would have thought, once his death sentence and exile were annulled by the newest Italian regime, he would have hurried back to Piedmon to take up where he had left off as a mover and shaker. But no: he spent half a century teaching Italian to little girls in Yorkshire, while Italy got into its messes without him. He satified himself with the odd paper dart ...
But then, it is rather difficult to take seriously a man unfortunately christened Giovanni Battista Testa. One sees, instantly, Salome with her platter-full of head, dancing towards the king ... 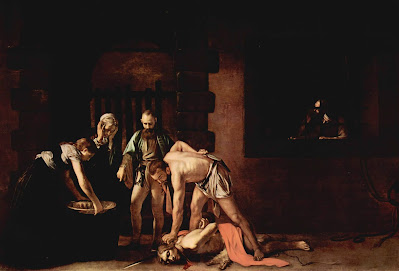 Posted by GEROLSTEIN at 6:05 PM

Hi, searching notices about G.B.Testa, the uncle of my maternal great-grandfather, I found your interesting note. I had been looking for more precise information about him, as in the archive of my family, on the back of a very faded photograph, I found the name of the ava Teresa Testa from Trino Vercellese, my grandgrandfather's mother, and the note concerning her brother Giovanni Battista, conspirator during the uprisings of 1821.
Despite of my surname, I'm Italian: my maternal family went from Piedmont in northern Italy (Gorizia) after a long period passed beetween Piedmont, Trentino Alto Adige and Istria. In fact the Austrians invited my maternal great-grandfather Carlo Hugues, who was a famous agronomist, to direct the local Agricultural School in Poreč in Istria. After the I World War, when Poreč passed to Italy, the grandfather moved to Gorizia in retirement and since then my family has lived here.
As you can see, my ancestors were people used to change places, even if they remained strongly linked to their homeland. G. B. Testa's sister, Teresa married Pietro Giuseppe Hugues, father of the great-grandfather Carlo, who came from a noble French family fled to Italy, to Casale Monferrato, to escape the guillotine of the French Revolution. My ancestors then dedicated themselves to the trade of fine fabrics and culture (a cousin of the great-grandfather was Luigi Hugues, famous grographer and musician).
Two centuries have passed since then, but the memory of these people always seems very fascinating to me and therefore I thank you very much for your informations.
Mariacristina Rigonat Hugues - Gorizia - Italy