The itinerant Mr Kelsey: to the colonies and back 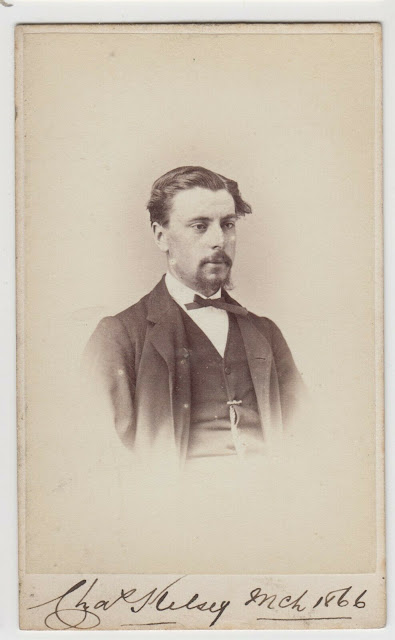 One of my favourite ebay shops is that run by 'claudiacaroline'. He (yes, he) has a fine, well-organised shop, clearly and commonsensically arranged and labelled, and he turns up the most delicious things. Priced to sell, and to be bought. My secret agent has bought all sorts from him in the past.

Today, I visited him, and spotted this slightly odd-looking chappie. And what? Not only dated, but photographed by Mr T Dureya in Adelaide, Australia? Oh, definitely worth a peek.

Little could I have guessed that my gentle inquiries would lead me from Adelaide to New Zealand, from Bethnal Green to Bournemouth and to Beurk's Peerage ...

In March 1866, Charles Kelsey was 25 years old and an orphan, and he had not long been in Australia.
He had been born at 9 Nichols Row, Tower Hamlets 9 March 1841, the youngest of the ten (?) children of a weaver turned painter and decorator, and coach trimmer, Benjamin Kelsey (x 14 September 1789) and his wife Rebecca née Jackson (m 10 July 1814). Father died when he was nine (his will is in the Canterbury files), and in the 1851 census little Charles is back in his father's birthtown of Nuneaton, being cared for by his cousin Elizabeth Pegg and her husband, George. Then, in 1861, both George Pegg and mother Rebecca died ... in the census of that year, five of the Kelsey children are homing together at 2 Parkfield Terrace: Henry is a trimming manufacturer, George (b 5 April 1827) and Charles are 'silkmen' , and Jane and Rebecca are presumably running the household. They have the help of a cook and a housemaid, so silk and trimmings presumably paid.
But in 1864, Charles decided to head for Australia. I see that by February 1865, he was established in Adelaide's Peel Street 'in business'.

At least, I know he was involved. But one advertisement says 'B Kelsey'. Brother Benjamin (x 4 January 1818)? Is that why Ben isn't with his siblings in 1861? But wasn't he a plumber? Or is this his son (1844-1906)? Or a nephew? Anyway, it's some kind of relation, and it will be the Ben seen marrying Eliza Oliver Harcus in 1870 ... garn, too many Bens!
The Kelsey firm expanded quickly. By May there are occupying 3, 4 and 5 Peel Street and selling harmoniums, musical boxes, banjoes, concertinas and musical cigar stands. By October they are advertising for a salesman for the 'London, Birmingham amd Sheffield trade' ... In early 1866, a review of Adelaide's buildings notes 'a very fine store has been erected on the north of King William Street by Mr S R Hall ...' and the Kelseys are advertising for a junior clerk and a book keeper ('must understand double entry'), then an errand boy. And then they are advertising 'revolvers, guns, life-preservers, Cottrel's thief-and-fireproof safe, and a London agency at 20-1 Wilson Street ...  The firm seemed to be doing all right, while Peel Street's biggest business, Samuel Bakewell's wholesale grocery, was struggling.
And then Charles shows up. Mr Charles Kelsey of Peel Street. And he's getting married to Emily, daughter of the aforesaid Mr S[amuel] R[oderick] Hall, JP, builder and man of substance.
'B Kelsey and Co, wholesale importers' carries on, selling his rosewood and walnut harmoniums, and in the local paper we see, in adjacent ads, the tie that binds our Mr Kelsey to his photographer 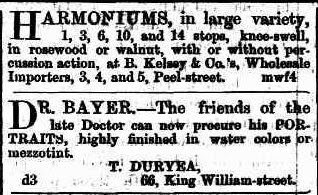 The business carries on into 1868 as bagatelle board, billiard tables, papier maché goods, iron bedstaeds, aneroid barometers, cutlery, glass, crockey and other imports 'too numerous to particularise' swelled the Peel Street premises ..
In 1869 the business seems to habe moderated its activities, Charles was noted as a 'deacon of Stow Church' and something to do with the Congregational Union, Emily gave birth to her first son (7 March), and Charles was up in court for 'allowing his chimey to catch fire ... fine 5s'. In 1870 he was advertising as 'a commission agent for absentee proprietors and is now 'of Alfred Chambers, Currie Street' and quitting 'a detached house of seven rooms in South Terrace... Peel Street had sunk somewhat in tone by this stage, and in May 1870 Kelsey and Co moved out to Grenfell Street ... and Benjamin got married to Miss Harcus 'eldest daughter of William Harcus JP'. A child was born, and the family returned to London. The business was sold up, but news of the Kelsey family appeared, periodically, in the colonial press. Yes, there is brother Ben (above), listed as Ben (sr) ... he must be the Ben in London .... oyyy.
But I think, also, that other of the brood may have sailed south. Charles's brother, John George Kelsey (b Castle Street 12 May 1822; d Blackwood 16 April 1899) turns up in the Australian press ... was it he who started the southward drift?
So, there I shall pause, simply to say that Charles and Emily had four children in South Australia, before in 1878 they left the colony and took a trip home. But they soon returned south, and settled in Auckland, where a final son was born, and at Waimarama. Charles ran a fancy goods business in the city, with one hand, and dabbled in farming and real estate and goodness knows what else with the other ... 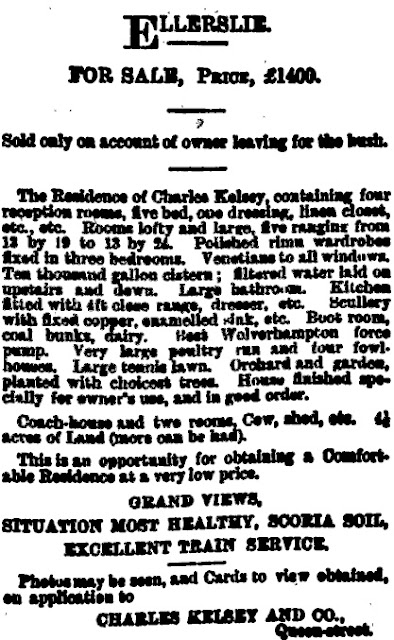 Eventually they returned definitively to Britain, to Bournemouth, where in the fulness of their years they passed away ... and I'm not going into the slightest bit of detail about the family, because there are 62 family trees on ancestry.com, of varying degrees of ambition and detail ... but they don't seem to give much about the PEOPLE in the tree, just dates and places which, sometimes, agree inter se ...  One of them has photos of all five of Charles and Emily's children, and one, indeed, of Charles. But it's not a patch on this one ... 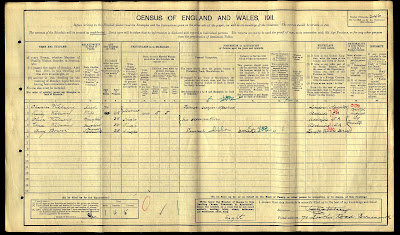 PS Charles's eldest son made it into the Peerage books by marrying the daughter of a baronet.
Posted by GEROLSTEIN at 2:13 AM

Most definately the brother of John George Kelsey who did arrive in Australia before Charles. John George came to Australia after the Family Silk Manufacturing business closed due to Chinese imports at the time. This was mid 19th Century.

Charles from a family of 7 boys and three girls. Parents Benjamin Kelsey and Rebecca Jackson.

Our tree connection is via John George Kelsey but what an awesome photo of Charles Kelsey.

It was John George Kelsey and his wife who opened the Peel Street Business as shown in his obituary. They later went to Palmerston (now named Darwin) where they showed their generosity in helping many folk of the district.

Was wonderful reading the info you supplied and some I was not aware of - great to read your blog.