Today was our local race day, and a splendid day it was. Alas, my infirmities meant that I wasn't on course, I had to watch it on Trackside TV in my living room .. so instead of popping to the bar between races ... I popped into the 19th century ...

And there I found these folk who aroused my curiosity ... baby Alice Meriton, Mr Littleton Malling, Amelia wife of Percy Elliott, Mr J J Jacques, William H Double, Charles Hunwick, Mr Morley (registered). I've got a feeling that I may not wholly have avoided the Victorian clergy and the Indian army ... 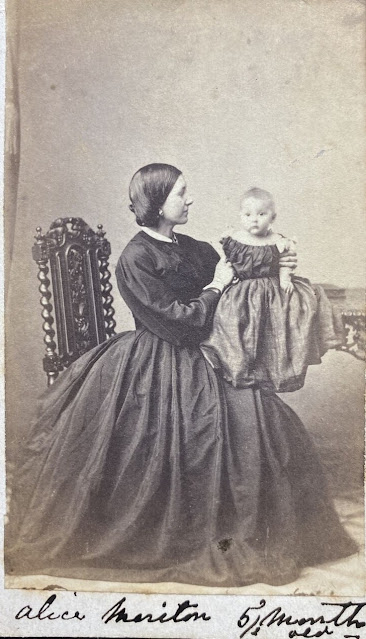 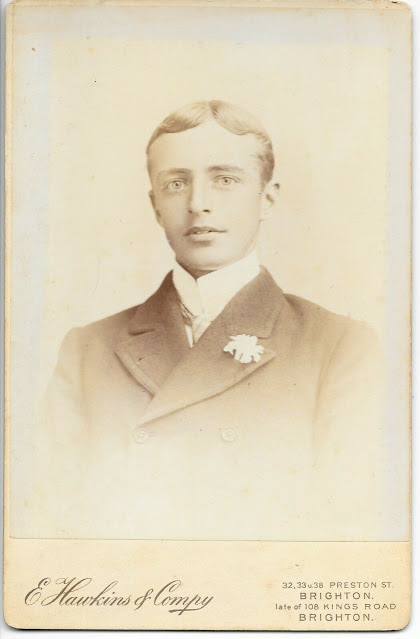 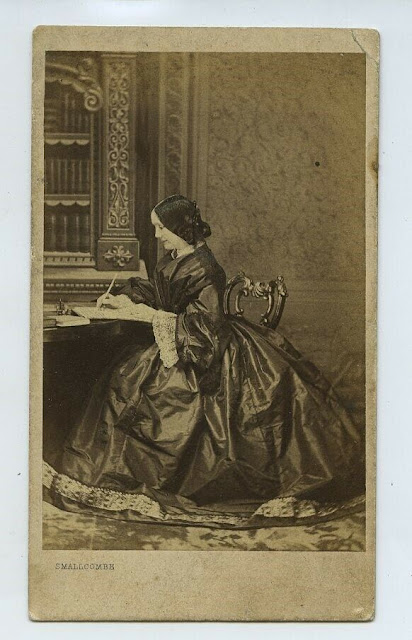 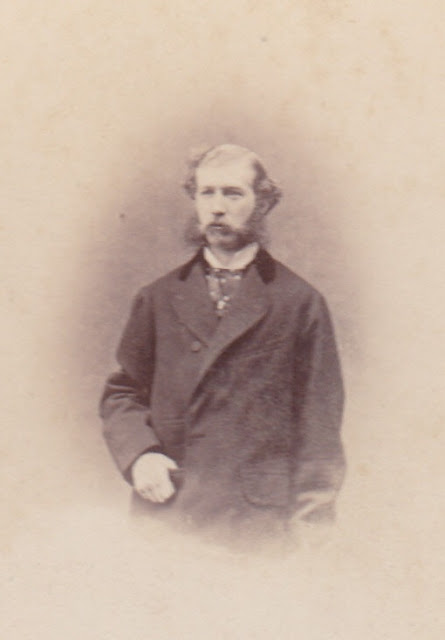 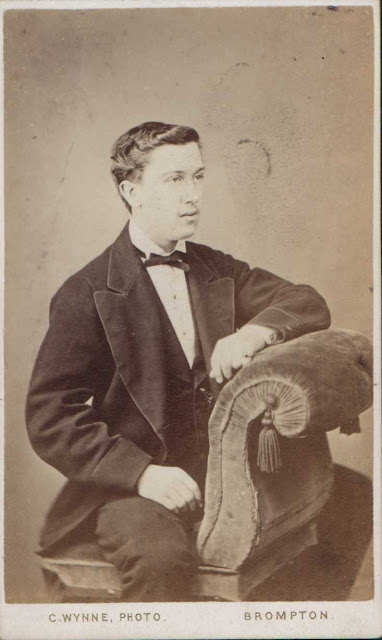 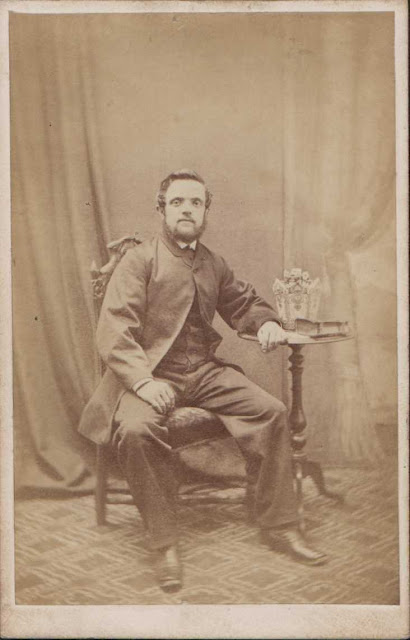 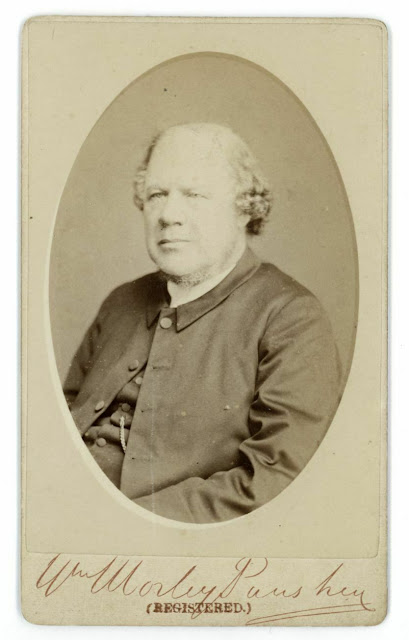 Yes, I know: funny lot. I like Mr Hunswick, he's got a slightly louche look to him. Mrs Meriton and Mrs Elliott look OK too. 'Mr Morley' (who isn't of course) looks like the phoney preacher from yesterday's episode of Midsomer Murders. I wouldn't trust him a centimetre.

Well, tomorrow I will dig deeper!

I did. I spent a whole day on the Rev Punshon (Morley was his middle and his mother's name) who turned out to be in the DNB anyhow. And then blogger ate the whole day's work up. Let's just say he was an orator, demagogue, 'personality' of the Methodist persuasion. A sort of Billy Graham but inside the establishment. And those gifts took him to a very visible place in the hierarchy of the Wesleyan church in, particulatly, Canada.

Blogger didnt eat my notes, so here is a short biog from somewhere.

'Wesleyan Methodist minister. After spending a few years in business, he attended the Wesleyan College, Richmond. In 1845 he received his first appointment, at Marden, Kent, and was ordained at Manchester in 1849. For the next 19 years he travelled in several circuits, including some of the London ones (1858-1864). In 1868 he went to Chicago as the representative of the Wesleyan Methodist conference, and then settled in Canada. His preaching and lecturing drew great crowds both there and in the United States, and he was five times President of the Canadian Conference. In Canada, he often worked with and mentored Manly Benson, a Methodist minister who was an eloquent lecturer. While in Canada, he married his sister-in-law, thought this would have been forbidden by the British'

His father was a mercer, he started out as a timber merchant's clerk, but found oratory more to his taste and got into lecturing and preaching at a very young age. He became well known in the north of England, and gave his first London performance ('The Prophet Horeb -- his life and lessons') 17 January 1857 ... going on to become a media starlet ("Rev W M Punshon at the Falls of Niagara' is the one I remember from the amusing list I had compiled) and the recipient of an honorary LLD from a compliant American college.
Anyhow, here are a few little bits I had clipped about the Reverend Doctor William Morley PUNSHON (b Doncaster 29 May 1824; d Tranby, Brixton Rise 14 April 1881) that I clipped to illustrate what I wrote 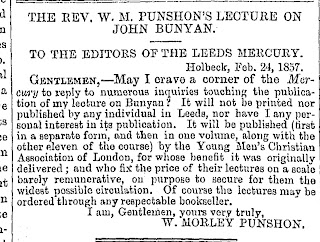 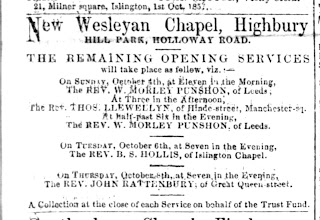 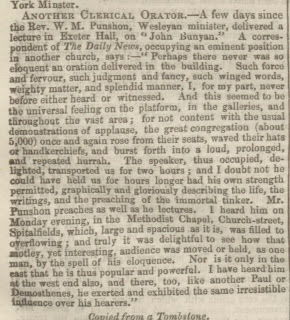 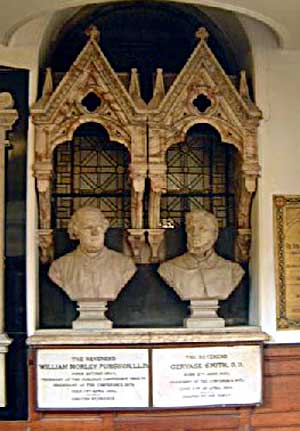 And it's sorry I am that I spent my day on Morley, his two survivng sons and marriage-dead daughter .. and I'm going to get on to the rest of the folk.
Alice E S MERITON (b Hamburg 19 July 1865; d Sunderland 1955) and her mother Jane SCOTT (1841-1927).
Yes Hamburg. Father clearly had something to do with ships. John Henry Rich Meriton (b Greenwich 21 October 1838; d Monkwearmouth 20 February 1868) 'engineer and fitter' married Jane, had three children all with elongated names, and died in Monkwearmouth at the age of twenty-nine. Jane remarried, another shipyard engine man named Thomas Dand (1825-1904) in 1869 and the little family spent their lives in Sunderland. Mother and sister Sophia Jane Gwendolin don't seem to have had any ocupation. Sophia became Mrs Dixon, but Alice stayed single. She tried her hand at teaching music, then took up drapery and ended up running a fancy-goods shop.
PS. Always revisit the scene: here is Annie Dand in the same box ... and she's taken from an album ... Grandpa and Grannie Birkett? Aunt Sithy Dent née Alderson (1822-1880), farmers wife of Bowes, Yorks?
The gentleman with the flower is Irwin Charles Lyttleton MALING (b Waikato, at sea nr Lyttleton, NZ 8 June 1877; d Brighton 1 December 1946). Yes, I know, what a name. But the Lyttelton is I guess fair enough. And he was quite an international chappie, even though he ended his life in Brighton. His father, Irvin Charles Maling (b Calcutta 2 FEbruary 1841; d Blckheath 13 June 1919) was born in India, to a scion of the East India Company, his mother was Miss Emily Ann Whitlock, a Sussex clergyman's daughter. Father became a Captain in the Royal Welsh Fusiliers, CMG, the couple produced a dozen children, and I see young Irvin in the 1891 census in England, with his mother's family and the excessive clerical number of servants in Groombridge. It seems that father was posted as an ADC/private secretary to the Marquis of Normanby, Governor of Queensland, in the 1870s which accounts for Irwin jr (et al) being born down that way.
Anyway, Irwin seems to have spent much of his life in Canada. He married there in 1907 (Jessie Edith Anton). I don't knowwhat he did there, but by 1930 he is down in Islip, NY with his second wife (Eileen Mary Glover of Carlow, m 1912) working as a florist's helper. In 1839 he is back in England, living with two of his unmarried sisters, and his sons Arthur Irwin Victor (4 July 1916, fitter) and Chistopher Whitlock (23 September 1920, car salesmam). I C L Maling is listed as 'labourer, agricultural hod-cutter'. Daughters Nina and Margaret are elsewhere, I guess.
Well, I didn't expect that smart little gentleman, brought up in a genteel vicarage with a squad of servants to end up as an itinerant hodcutter ... 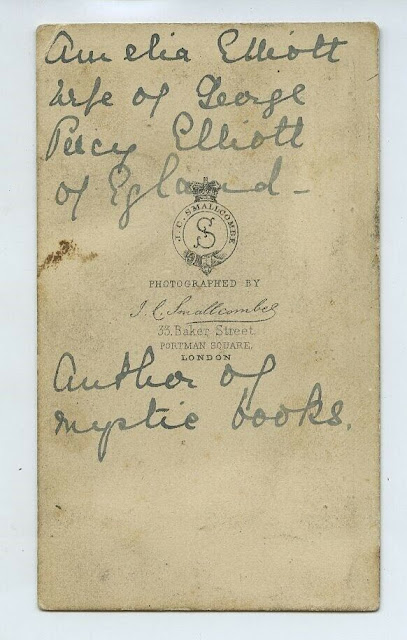 I took it to mean that George was the author of 'mystic books'. But he wasn't. He wrote number of books of a more conventional kind, but the 'mystic' was apparently Amelia.
George (d Awliscombe, 12 July 1874) son of the Rev Luther Graves Elliott and Elizabeth née Taswell graduated MA from St Mary's Hall and became a barrister, a magistrate, one of the Sudbury Bribery Commissioners, and twenty-five years a police magistrate at Lamberh courts. He was 'of Streatham Common and Egland House, Awliscombe, Devon', fathered eight children, kept half a dozen servants, left a tidy sum to his young(er) wife at his death  ... but may be exculpated from 'mysticism'.
Amelia's books -- written, if they were, under we know not name -- elude me utterly. Her children don't. One son died as an infant, another at University, one lived to become (sigh!) Rector of Stoke Damerel. One daughter wed a Major in the Cheshire Militia and ... well, there are plenty of descendants who can sort out the verity of mystic Amelia.

The muttonchops man. John Thomas JACQUES (b Birstall, Leics 25 March 1842; d Leicester 12 October 1902). I was afeared he might be yet another clergyman, but, no. J T Thomas, elder son of James Thomas (woolstapler) and his wife Ann (née Kinton) of Birstall was destined for his career right from his teens when he passed the Apothecaries Hall exams (1860) asd was taken on as a dresser, and then a live-in medical pupil at Leicester Infirmary. He worked his way to become house surgeon and longtime chief medical officer at the Infirmary while conducting a pratice at 9 The Newarke, and sometime acting as Surgeon Major to the Leicestershire Yeomanry. He married (18 July 1872) Eleanor Eirene Johnston (d 30 Porchester Sq 16 September 1929), bred freely (Eirene Melina, Lilian Evelyne, Harold, Cecil Parker, John Bertram, Violet Lowder, Ernest William F, Eric Taylor) kept a household of a half-dozen servants ... I'm not chasing all those up, but I see that Violet married a Professor of Anatomy. 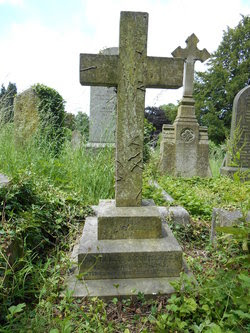 William Henry DOUBLE (b King St, Longacre 17 March 1853; d unknown)
was, like his father before him, a coach currier. In 1871, they are living in Wimbledon where father John and his wife Eliza have a business employing 3 men and a boy. By 1881, William has his own business at 30 Castle Street, Finsbury, and has acquired (1877) a wife, Frances née Gillingham. Soon after, a daughter, Mary Ann. Frances died, aged 43, in Kingston, and the following year William married Julia Elizabeth Starnes (née Hales). Mary Ann was witness. And then they all disappear ....

And finally, Charles HUNWICK (b Greenwich 1842; d Camden 7 March 1901)
I thought this cheeky chappie might be fun. He is, at the least, unusual. John Hunwick came, like many a Hunwick, from Feering in Essex. His wife, Maria née Hughes, didn't seem to know where she was born. Sometime she said Deal, sometime Ramsgate. John was a career fireman and, after the birth of their first son, John, they removed to Greenwich where they repeated with Sarah, Louisa, Maria, Charles, and Thomas. Charles started out as a simple labourer, but he found his niche around 1862 when he was employed by William Smith of 82 Regent Street as a billiard marker in his well-known Billiard Rooms. A billiard marker was not a simple adder-up, he had to be everything to everybody, a factotum with canny appeal ... Charles moved on the be 'proprietor of a billiard room' for a while, but had sagely resumed his old occupation by the 1881 census.
Charles married (4 August 1867) Jane Kell and after her death in May 1882 wed Eliza Ray. He died in Camden in 1901. 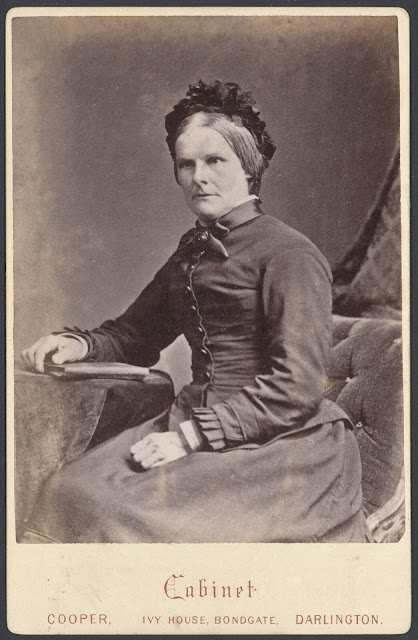 Posted by GEROLSTEIN at 9:17 PM