Today's little bit of showbiz history: sparked as usual by the discovery of an old photograph... 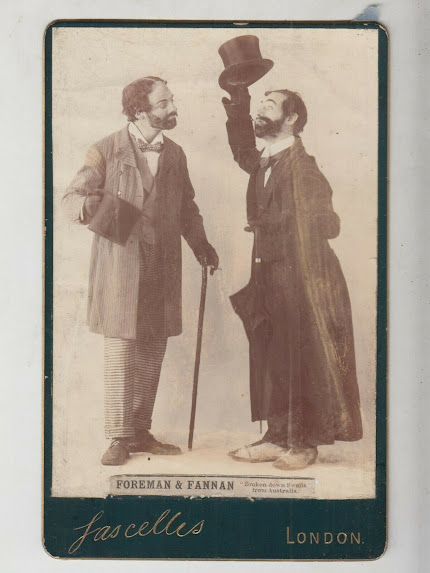 Well, it was not just the photo. Someone, a hundred years ago and more, stuck a caption on the card which says 'from Australia'. So I thought I'd have a wee peep to see if they were someones about whom I ought to know. And if they were kosher Aussies.
Well, they weren't. But they spent several of the best years of their long careers in Australia, both married Aussie lassies, and they worked as a double act in the music-halls and in pantomime of Britain and the colonies for over thirty years together. Because James Foreman and Peter Fannan weren't just partners: they were brothers. And if their forenames were their own, their surnames were not. They were the Messrs McCormack.
James Edward McCORMACK (b Plumstead, Kent 25 March 1869; d Colindale 3 December 1961) and Peter McCORMACK (b Plumstead 16 April 1871; d Bromley ?February 1961) were two of the sons of Sligo-born Peter McCormack, a labourer at Woolwich Arsenal and his wife, Mary. I first see them performing on the music halls as 'refined Irish comedians' at the Parthenon Music Hall in Liverpool at Christmas 1889. They obviously went down well, as the went on to end-to-end dates at the People's Palace, Newcastle, the Prince of Wales in Middlesborough, the Star Music Hall Dublin, the People's Manchester, Rochdale, Bolton, the Cardiff Philharmonic Music Hall, the Alexandra Wigan &c &c. The boys clearly had more strings to their act than just crosstalk: 'they show their skill as dancers', 'end wth a duet' and in February 1891 they put a toe into London at the Sebright Music Hall, Bethnal Green and the Hammersmith Varieties ('They relate many amusing particulars about 'The Connor Clan'). The following year, they played Sam Collins Music Hall, in 1893 I see them at the Cambridge, in 1894 at Gatti's and the Hammersmith Temple, but most of the year they were touring the larger provincial towns where their popularity was firmly established.
Whoever was hiring talent for Williamson and Musgrove of Australia then changed their lives. They were engaged for the firm's Princess's Theatre in Melbourne to play in the end-of-year pantomime, and in November they and another music-hall act, Albert and Alice Saker, sailed south. 22nd December they opened in Beauty and the Beast with Alice Saker as Beauty, Marie Luella as principal boy, and James and Peter playing Beauty's brothers. Following the pantomime season the four joined Harry Rickards's troupe, for almost a year, before the boys headed home. They headed on the Monowai via San Francisco, where they were engaged for the Orpheum variety show ... 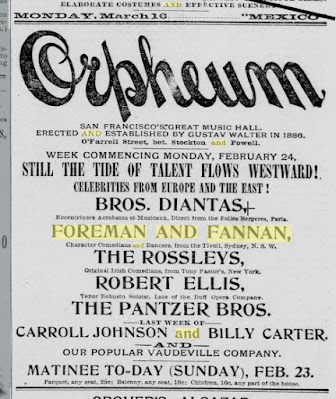 It was later related that after their first performance, greeted by seven calls, the management told them they were a failure and that their salary would be reduced. So they left. So their American career lasted one performance? They were still billed for a week. But then they were gone.
'The funny men straight from Australia' were soon back in London, playing the South London Music Hall, and pantomime (Sinbad) at the Parkhurst, but come 1897 they were off on their travels again: a season at the Johannesburg Empire, and then in 1898 back to Australia, New Zealand and Rickards.
This time round, they didn't come home alone. Both boys brought home a girl. James plucked one of the  prettiest dancers on the circuit (2 May 1899): 'Olive Delroy' [Lydia Olive BREAKWELL] performed in a duo with 'Mabel Lynn'. Peter brought home Rosa ABBOTT (1875-1952) from Ballarat, another prize dancing girl who, with her sister Gertrude [Teresa May] ('the Abbott sisters') had featured in variety with Rickards and Harry Cogill. Each wife duly delivered a son, but there the similarity ended. Olive's son died, she broke down and died 'of consumption' soon after (March 1902). Rosa's son lived to wed and father children, and she and Peter passed their Golden Wedding before her death.  James would remarry, and himself have children.
For the next 20 years the brothers played the music-halls with the latest version of their act -- they were no longer Irish, they were Percy and Harold, the ragged millionaires ... and come pantomime time they were Jovial Joe and Grumpy George in Robinson Crusoe or the broker's men in Cinderella 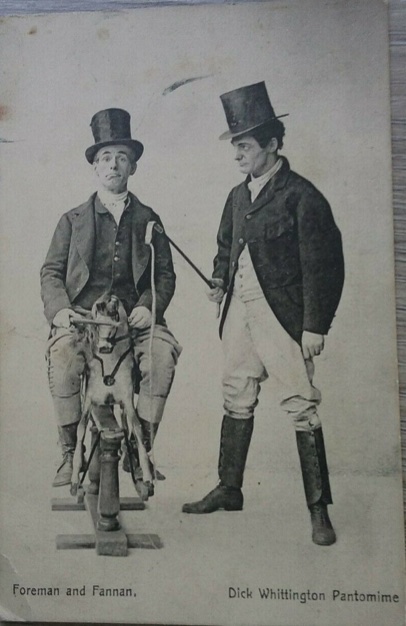 In 1909 they returned once more to Australia to play 'the bold, bad robbers', Snatchem and Catchem, in Melbourne's King's Theatre panto of Babes in the Wood, directed by none other than Johnnie Wallace. The panto toured asfar afield as Perth, before the company switched to variety programmes till the end of their six months' contract. 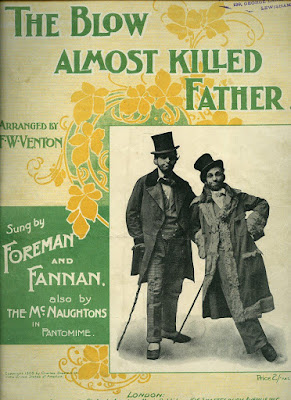 I see Foreman and Fannan as a team for the last time in 1920. They have rather slipped down in the billing.
The brothers, together in so much through life, both died in 1961.
Peter and Rosa's son, confusingly named Peter McCormack and working as 'Peter Hannan' (initially jr) played in touring revue/variety programmes and developed an act as a comedy padre: 'The Rector of Mirth'. He died in 1949. 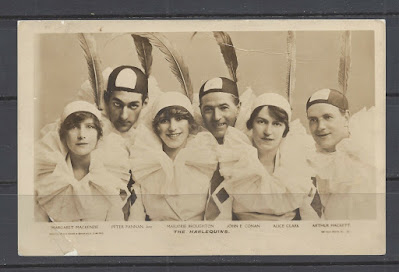 Posted by GEROLSTEIN at 2:11 PM