Die Grossherzogin von Ghastliness or, not in that wig you don't!

I couldn't go past this photo. I just couldn't. German, obviously. Even though stamped San Francisco. Someone playing a low farce or burlesque. That lumpy Gretchen wig is an absolute cliché. Read the caption, Kurt. Howwwwwwwwl. Alwine Heynold as ... the Grande-Duchesse of Gérolstein!

The French opéra-bouffe, of which La Grande-Duchesse de Gérolstein is a shining example, was, in my opinion, one of the most stunning varieties of musical theatre in the history of the genre. Its combination of textual wit and sparkling music has rarely, if ever, been equalled. But when it came to the time to export the enormous successes of Meilhac, Halévy, Crémieux, Hervé and Offenbach to other countries, in other languages, things did not go so smoothly. Britain and the English-language theatres and writers just didn't understand the esprit of the pieces, and writers such as F C Burnand and J L Planché tried to remake them in the form of old-fashioned English burlesques. The results were not good. Only when John Russell's La Grande-Duchesse (adapted by C L Kenny) and Hervé's own Englished Chilpéric came along, did Albion finally find the right groove. And the German-language theatre? I'm not at all sure it ever did. And this photo is an example. Here is Frau[lein] Heynold 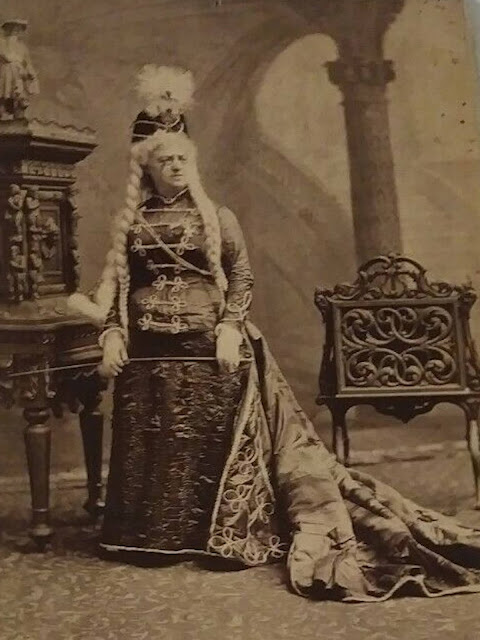 Dressed to play the pubescent, sexy, lassie of the title, first played by the sexy Hortense Schneider and Lise Tautin, and in England by piquante Julia Mathews and buxom Emily Soldene, she looks like a pantomime dame with a taste for chastisement ... Oh yes, the gown is the same: it always was. Here is Gertrude Cave-Ashton in the English provinces as late as 1885 ... 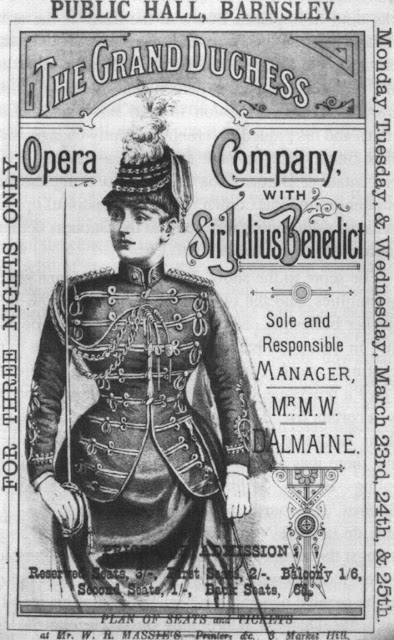 But the attitude? Not an ounce of sophistication.

The press commented when the German opera-bouffe company hit America ... well, we've seen these pieces done French-style and English-style, wonder what they'll be like German-style. The answer: the German language press liked them, otherwise they were rather ignored. Aimée, Tostée and their sisters were not challenged by Mrs Heynold.

So who was Mrs Heynold? I can't wholly answer that because the requisite documents are confusing. Anyway she was Miss Heynold to begin with, and she was born in Hannover, Germany.

I spot her on the stage at Berlin's Wolterdorff-Theater 10 July 1872, playing Méphisto to the Marguerite of Albertine Stauder in a German version of Le Petit Faust. It seems she was acted and sung off the stage. However, salvation was coming. She was hired to travel to New York to join the company at the Germania Theatre, and America would largely be her home for the next years.
She played with the company in New York and in Philadelphia, then toured with Lina Mayr's troupe and ended up in San Francisco, starring at the California Theater (1 August 1875). Now comes question mark number one. In December of that year a newspaper published a piece on married ladies who continued to act under their maiden names: first on the list 'Frln Heynold has a husband in Germany'. Really? Maybe. But at some stage she acquired one in San Francisco. A newspaperman named Rudolf Thomann (b Lüneberg 11 December 1847). I wonder where that marriage record is. Anyway, she went right on performing as Frln Heynold... giving the West Coast Teutons her Duchess, her Boulotte, her  Giroflé-Giroflà, her Diana in Orphée ('she dressed more like Bacchus') through till 1877 or 1878, after which she seems to have spent a time in Germany. In 1880, the couple can be seen in Almeida. He is 'Editor of The Post, and she is 'keeping house' 'aged 28'. Well, she wasn't just 'keeping house'. In the 1880s, I see her performing in Omaha, St Louis, Philadelphia, Texas, crossing the Atlantic, and making an appearance in the news when Thomann died in 1890. In 1891, at San Francisco's 124 Clipper, she describes herself as 'widow' and was appearing with the local amateurs. So what next? Is that all? 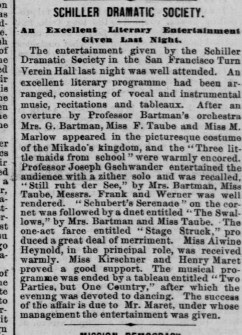 No. In November 1894 a season of German plays was presented at London's Royalty Theatre. The character lady of the troupe was Frau Doktor Heynold-Thomann. Well, whatever the truth of that appellation, I cannot tell. Nor can I find what became of her. Did she go back to America? To Germany?  I think Germany. Her name appears in the Bühnen Jahrbuch for 1899, 1900 .. yes Bielefeld Sommertheater, Tilsit ... and obscurity ... not in that wig, I hope!

Posted by GEROLSTEIN at 8:08 PM