The Triumph of the Nibelung

Well, my Wagner Zyklus has begun. Last night I got under way with what Wagner called the 'prologue' to his melodramatic, mythical miniseries, Das Rheingold. It turned out to be a somewhat surprising Rheingold, for -- just as on my last visit to the Deutsche Oper -- the evening was dominated by one superb, overriding performance. Again, like last time, it came from a performer in what would not be considered the 'star' role, and the result was a most interesting turning around of the usual values of the opera.
I'm reviewing this Ring Cycle for a Dutch-language publication (Opera Magazine/ Place de l'Opéra), so I'll slip in here the English version of what I wrote after I'd made my way back through the Berlin night to my Nollendorfstrasse home.

"Tonight (17 April) The Ring of the Nibelungs returned to the stage of the Deutsche Oper, in Götz Friedrich’s celebrated and time-honoured ‘Time Tunnel’ production, with house musical director Donald Runnicles featured as conductor in his much anticipated first Ring since his appointment.

After a quarter of a century, there is nothing left to say about the production itself. You can log into the ‘concept’, and its ‘underground railway’ setting, or you can take the pleasing and mostly unfussy visual images simply for what they are. For me, the abiding visual of this Rheingold is, fittingly, that of the gold itself, searing richly through the now rather tatty, seamed gauze waters of the Rhine. And if those ageing ‘waters’ did flop around a bit and finally get unfortunately hooked up on the scenery, who cares. 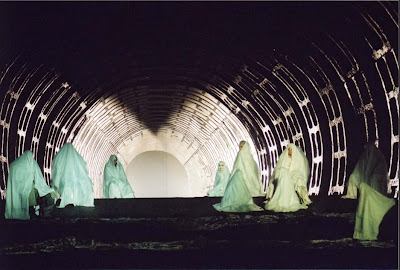 Wagner christened his work The Ring of the Nibelungs, and when you watch Das Rheingold you can see that the dwarvish underworld race of the Nibelungs thoroughly deserves its place in the title. Alberich is clearly the most interesting and important ‘person’ in this prologue to the Ring mini-series. Tonight, he was even more interesting and important than usual, for the Alberich of Polish baritone, Tomasz Konieczny, quite simply stole the show.
From the moment he clambered on to the stage to chat up Wellgunde, Woglinde and Flosshilde in their glistening fishscale tights and peroxide tresses – no ugly dwarf, but a lithe and darkly handsome young man with a gloriously ringing voice – he drew all eyes and ears. The Rhinemaidens must have had water on the brain to refuse his advances, and when came the time for his confrontation with Wotan, this magnetic Alberich looked to have it all over his godly antagonist.
That feeling was exacerbated by the fact that the Wotan of Mark Delavan put up virtually no opposition. This Wotan seemed more like a quizzical English school teacher in his first trench coat than a Being of importance: utterly human and ungodlike, utterly unimpressive, with only his magical adjuncts to make him significant. Well, I suppose that it is all right to stress the weaknesses of this ultimately flawed God, but this flabby Wotan seemed to have only weaknesses. Spear or no spear, Alberich should have beaten him hands down. Vocally, he did. The bright, eager, beautifully vibrant voice of Konieczny simply outclassed the weirdly muffled and throaty tones of Delavan. The musical highlight of the night was Alberich’s curse, the dramatic highlight of the night was Alberich’s crazy, dancing final exit, the unalloyed highlight of the night was Alberich, fullstop. How often in a Rheingold does that happen?
The other roles were well and sometimes extremely well played: the vast super-basso Fafner of Andrea Silvestrelli (I wait eagerly for the dragon!), the rich contralto Erda of Ewa Wolak, handicapped by a Barbara Cartland pink frock, the ringing, aggressively blonde Freia of Manuela Uhl (I think she shares a hairdresser with the Rhinemaidens), the impeccable and lively Loge of Burkhard Ulrich and the copybook Mime of Peter Maus. Judith Németh was as excellent as one can be in the ungrateful role of Fricka, and the only awkward casting was that of my hero of last year, Markus Brück, as a tubby Donner who looked as if he belonged in Nibelheim rather than Walhalla, and who surely could never be a hammer-thrower.
But, in the end, it didn’t matter. It didn’t even matter (to me) when, in a respectable orchestral performance with occasional expansive highlights, the horn-player split a note or two. It was Alberich’s night. The knowledgeable audience’s cheers at the final curtain confirmed that in spades.

It’s always sad when the best character gets written out of a series.
What a shame Alberich – this Alberich -- isn't in the next episode…
I'll just have to patient it out until Siegfried ... "

That 'next episode', Die Walküre, happens tonight, so I guess its time to finish my breakfast and gird up my operatic loins ...
Posted by GEROLSTEIN at 11:51 PM