At Home in Berlin

.
For my first three nights in Berlin, I have again been staying with Kevin in his flat in the Eichborndamm. However, since I had decided that this time round I would devote a whole two and a half weeks to the to-be-discovered joys of this city, I needed to find myself a little room somewhere, preferably down in the Nollendorfplatz area, from where I could walk (as I love to do) to many of the places I prefer. Wise heads were shaken, ridiculous sums of euromoney suggested, and I was about to give up the whole idea when a friend of Kevin’s came up with an address. He had, it seems, stayed at the ‘Nollendorf Apartments’ a few years back and …
From my computer in New Zealand, I hastened to their website. 45 euros a day seemed pretty reasonable for anything in such a situation ... minutes from tube, supermarket, and the bars, cafés and restaurants I already knew from last year, so I promptly signed up for two weeks.

Yesterday I U-bahned it (I’m getting the hang of the excellent Berlin underground) down to the Nollendorfplatz and a rendez-vous with Andrew, the owner of the business. Number 32 doesn’t look very appetizing from the outside, so I was left with my chin on the floor when the door to my second-floor lodgings was opened and .. where I’d expected a sparse and functional little room, such as I’ve had in the past in Paris for the same price .. here was bliss on a stick! A lovely, big room, with the afternoon sun pouring in through the windows, a splendid big bed, a vast and comfy couch, a pretty dining suite and – for heaven’s sake – a delightful sunny balcony overlooking grass and shrubs and bowered by a huge flowering tree. A kitchen with all mod cons – oven, fridge, microwave, cafetier, and oh my God a washing machine ... a bathroom to match … plus TV (which I don’t use) and the sine qua non ‘wifi’! Stay here?, goodness, I could LIVE here… 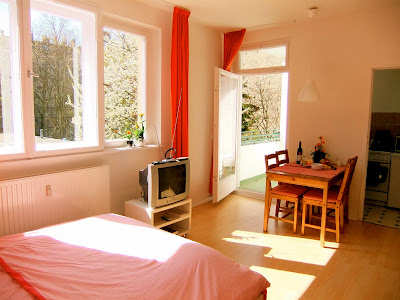 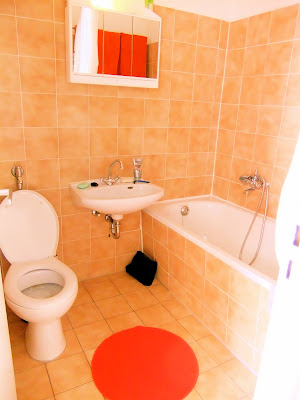 Kevin escorted me to the local supermarket, and I stocked up with the necessities of life – wine (tiens! Châteauneuf du Pape at 11 euros..), local sausage, tête de veau, cheeses, olives, brown bread – and then hurried ‘home’ to fill my fridge. Kevin and Geerd were off to the movies, but not I: nothing – particularly nothing cinematic -- was going to prise me out of here, just yet! I spent the rest of my afternoon and my evening, curled up on that great bed, devouring my shopping, answering my mail, and I’d just ventured on to a little work on my Victorian Vocalists when the comfort of the bed got the better of me. I snuggled down, and at 8.30pm – happy as a homecomer -- I was fast asleep. 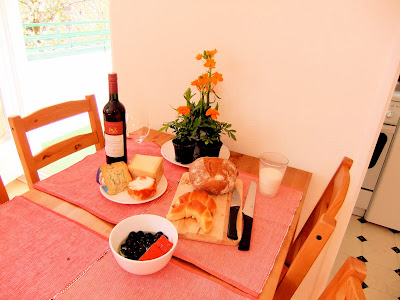 Today dawned a perfect spring day, dawn-cool and white-sunny. I lolled, I lingered, I looked at the legend on the washing machine (what the heck does ‘Pflege’ mean, last time I saw it, it was on an ad for health insurance..), I shaved and showered and lingered some more, and as a little heat began to come into the sun, I decided it was time to head for the outdoors. More precisely, for the Saturday (?) market in the Winterfeldtplatz, under the St Matthias Kirche, five minutes from my door, where I hoped to buy a few flowers to decorate my pad, re-stock my already depleted cheese cupboard, and find some rolls to replace the brown bread the crust of which defied my teeth.
And, I decided, after my pathetic franglais attempts in the supermarket, I would – defying the inherent dangers -- do this thing in German. 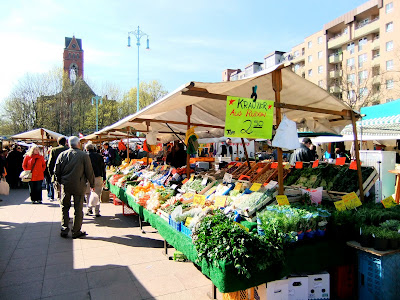 It is only a little market, but I spent a whole hour wandering round and round its (mostly) produce and food stores. The labels are ever so useful. I mean, I learned my French in the markets of Monaco and Beausoleil in the sixties: could I, nearly half a century on, repeat the trick here? Unlikely, but I have come home knowing that Spargel are asparagus (piled everywhere), that a cucumber is – surprise! – a Gurke, and that marigolds are Studentenblume. Identifying Rhubarben and Artischocken wasn’t too hard, Bergkäse pretty easy (it looked so good I bought some) and thanks to Tim Fischer’s song I could tell what Ziegelkäse was (I bought that too). I was able to tell the marigold man (as I bought them) that ‘man hat diese Blümen auch in Neue Seelande..’, but I fell in a heap when he replied volubly and had to admit ‘Ich weiss nicht wirklich Deutsch sprechen’. He grinned and said ‘Bye Bye’ which I’m pretty sure isn’t German.

So here I am, home again, with my Studentenblumen and my ornithogalum dubium (which I know isn’t German) in place, my foodie purchases lined up along the table, the washing machine mastered (difficult, even in English! but now I know what Pflege and Spüren mean!), and murdering a glass of milk (the Châteauneuf didn’t survive the night) and a wondrous spinach, cheese and sesame crêpe, bought of a man who was no more German than I, but with whom I failed to find a lingua franca beyond sign language. If this Winterfeldplatz market is a daily affair, I will never have to use Andrew’s nice new stove!

The sun is shining strongly now, drying my clothes on the balcony. There is even an iron and ironing board here, so my best trousers can be readied for tonight’s trip to the opera. For yes, tonight begins my Wagner-Zyklus.
At five I meet Kevin at the Café Impala, three minutes away, the venue which has replaced the disgraced Café Berio (it committed the sin of changing hands and thus clientele) as the Gentlemen’s Rendezvous of the area. And from there to the Deutsche Oper..
What a day! What a programme! One that I think requires and hour or two on the big soft sunny bed with a Victorian Vocalist. I promise I won’t actually close my eyes…
Posted by GEROLSTEIN at 4:11 AM