In Basse Normandie. Where the andouille comes from...
and less than an hour distant from Domfront, where Rosy won her race for me two years ago. Seems Normandy agrees with me..
It's early morning, I'm in Sydney .. I fell asleep before the race was run and woke at 5am to see ... the result that I'd so hoped for
Hourrah!!!! or should I say Hue-rah. Marion and the Hue family have notched me up my second french win.
Stories and pictures to come in due course .. but right now, I wonder if I'll be able to sleep a little more. 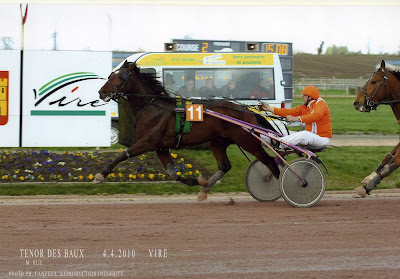 .
Follow up:
Well, thanks to the splendid Basse-Normandie harness racing website (http://www.lescourseshippiquesbassenormandie.com/), I've now been able.. from my couch in Sydney .. to watch Tenor run his race. And run he did, which is more than can be said for nearly half of his rivals. Five of the twelve starters -- including the leader and the parked horse -- galloped and were disqualified. But it didn't make any difference. Tenor would have won anyway.
He made a tidy beginning, avoiding the horse inside him which started the galloping epidemic right away, and was quickly tucked away into the trail, behind the determined leader. There was a fair amount of movement outside him, as horses came up, and then went back and/or trotted awkwardly, but he just stayed where he was until the final turn when the horse outside him galloped, opening the door perfectly for our lad to pop off the fence, zoom easily past the leader (which then broke!) and cruise to the line, a comfortable length and a bit ahead of the only strong finisher and a Browns-Cow parade of beaten horses.
I think you could say he won with his hoof tied behind his back.
So he's proved himself superior to this company, now we shall see how he takes a step up. I'm confident ...
Posted by GEROLSTEIN at 1:53 PM