A Night at the opéra-bouffe

My musical and theatrical mission in Berlin, 2010, is to see and write about the latest Deutsche Oper Ring cycle, but when I realised that the Dresden Staatsoperette were opening a new version of the 1877 Delacour-Strauss Operette, Prinz Methusalem, during my time in Germany, I knew that I had to be there. After all, I reasoned, there was a fat chance of my having another chance, in my lifetime, to see this most infrequently produced of pieces, and Dresden couldn’t be that far from the Nollendorfstrasse. Well, it actually is quite a trek, but I am very glad I made it. Prinz Methusalem – scarcely a success in its original career at the Vienna Carltheater, a violent flop in London and some sort of a success in America largely thanks to an interpolated comic recitation – owes its revival to the Dresden’s theatre’s continued devotion to pumping life back into the lesser-known and now little-seen works of the Johann Strauss repertoire. They have, however, been sensible enough to slim its overblown proportions and modernise its book. Quite how much slimming and modernising has been done, I can’t tell, for I am not one of the perhaps dozen people alive who have actually exhumed and read the original text of Prinz Methusalem, but the result is a sensibly-sized Operette, with eleven principals, a traditionally-sized chorus and quite a bit of good, silly fun. I don’t know, either, how the score has been treated, for Prinz Methusalem produced no Strauss bon-bons -- no 'Nur für natur' -- its one takeaway tune was a lowish comedy topical song ‘Das Tipferl aus dem i’. As heard and played in Dresden, however, it is evident that the music includes some delightful pages, ranging from a splendid duet for the Prince and Princess, rolling around Rosenkavalier fashion in their newly marital bed, a lively and very Offenbachish ‘Piff paff pouff' ensemble, a grotesque ‘Rache’ redolent of the same composer’s Ba-ta-clan, and a fine waltz finale, but scarcely a solo of memorable proportions. All in all, Prinz Methusalem 2010 is a decidedly agreeable piece of – if not quite genuine opéra-bouffe (for that sophisticated genre had, by 1877, faded from its triumphant domination of the musical theatre world) then something bordering on it, studded, in the manner of earlier times, with topical jokes and comic contemporary references, and set with music which is never less than likeable and occasionally (eg the duet) very much more than that. But unexceptional Operette or not, the evening was a real treat, and it was a treat because the forces of the Staatsoperette made it one. The direction, the musical direction, the design and the performances – all, quite amazingly for any theatre, apparently working together, in the same style and with the same end in sight – were, almost without exception, first class. The piece is staged with just the right taste and flair – the scenery and costumes of Yashi Tabassomi teeter perfectly on the verge of the crazily exaggerated style of genuine opéra-bouffe – the topiary setting for act one was delicious, the courtiers’ costumes with their peaked shoulders and protruding tails exactly in the right mood – and the direction of Adriana Altaras complemented that style, neatly and brightly comical without descending to crass foolery and only occasionally a bit ‘busy’ and distracting. Methusalem committing a Shampoo cunnilingus on his bride, under the dinner table, was, for example, a cute idea, but it completely upstaged the star comedian’s delivery of his (and the show’s) big number. The triumph of the night, for me, was, however in the casting. Folks like I, who have spent half their working life casting operas and musicals, know just how impossibly difficult it is to line up a cast which is excellent from top to toe. Well, the Dresden Staatsoper, using very largely members of its own company, has just about done exactly that. However, shining out at the head of the cast list, in the role of the titular Prince, is a guest artist: mezzo-soprano Jana Frey. I don’t know how many hundreds of performances of Hosenrollen – from Octavians to Orlofskys to principal boys – I have seen in my life. All I know is, I have never seen a better one than this. Mlle Frey is quite simply stunning. Along with a grand and generous mezzo singing voice, which can soar or giggle at will, her acting hits the spot precisely: she stands right, she moves right, she is boyish without being butch and klonky, she pouts like a boy, and she is witty and bright-eyed and classy-funny and adorable ... I am rarely at a loss for words, but she almost defies them. She simply has it all. She makes you understand why artists such as Antonie Link -- the original Methusalem -- had the theatrical and society worlds of the era at their feet. Will anyone ever let her play a woman again? 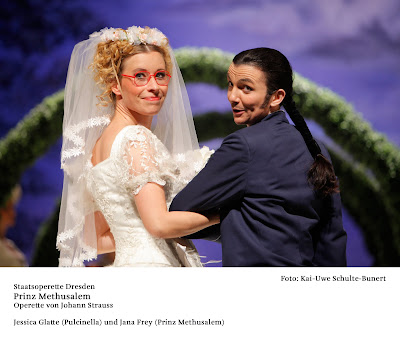 Her ‘principal girl’, the Princess Pulcinella was played by local artist, Jessica Glatte. Gawkily comical and bespectacled, with a hair-do from Hell, playing her scenes with perfect timing and point, and, again, just titillating the edge of grotesquery in her acting, she also sang this sizeable soprano part with some skill and with only a little excess vibrato. When she joined Mlle Frey in the should-be-famous bed duet, they produced the musical highlight of the night. The Staatsoperette company is extraordinarily strong in character men. This cast includes eight of them, all with plenty to do, and there was not a dud amongst them. My particular favourite was Frank Ernst as the Court Composer, Trombonius, singing with tenorious zing and acting with enormous point and twinkle. If Offenbach were still running his Bouffes-Parisiens company or Karl Treumann still on the Franz-Josefs-Kai, one of them would surely snap up Ernst as a permanent company member. I have rarely seen a more effective player in the decidedly difficult style, with its special demands on both vocal and comic abilities, which is needed to play these decidedly special shows of the mid-1800s. 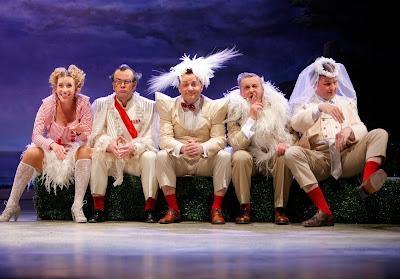 Christoph Simon, as Trombonius’s young offsider was also nicely fall-guy-funny (when he had his trousers on), and head comedian Bernd Könnes made a crisply comical and ringingly sung King Sigismund, but every one of the team did his bit, and did it with success. The world, alas, is not perfect, not even in Ricarac and Trocadero, and on just a couple of occasions I did find myself jerked from a blissful existence in my beloved world of Operette-cum-opera-bouffe. I found the performance of the heavy lady, Sophistica, dolled up cheaply like something out of ‘Absolutely Fabulous’, decidedly unfunny and one-keyed. And the opening to the Third Act, played by soloists and chorus, was a flop. When you have had one superb bonking scene, between the stars, you simply do not need another, crude one, played by half the rest of the cast. Chorus acting, traditionally, is a grim thing, but tonight some of the men actually rose above the traditional low level ... until this scene. The choruses did, however, sing clearly and effectively, and together with a nicely supportive and not too obtrusive orchestra, under the tidy and accurate baton of Ernst Theis, they added their considerable bit to the joys of an evening that I am not likely to forget in a hurry. 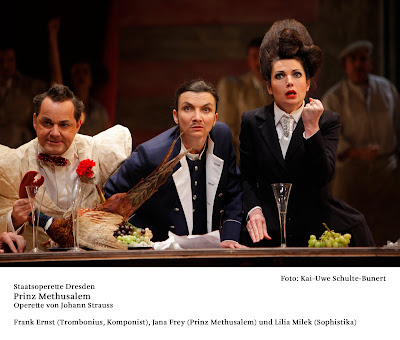 So, would I go to see Prinz Methusalem again one day? Well, I’ve seen it now, so, probably not. I'd rather see something else. Would I go to see the Dresden Staatsoperette company in something else? Would I what! I quite simply shall. If they insist on Strauss, how about the bon-bon stuffed Der lustige Krieg .. or, imagine Jana Frey as Fatinitza … But I am getting greedy. Grand nights out at the theatre have that effect on me. And this was, without question, a grand night out.
Posted by GEROLSTEIN at 6:07 PM