.
Just in case anyone is wondering why I am lingering in Sydney, when I was only here a couple of months back ... I am here to indulge in a little horse trading.
My equine empire has recently gone through one of its ‘excess fat’ periods, largely thanks to my unbridled purchase of three new animals (Livia, Ténor, Agnes) over the last year, and a little bit of rationalisation was needed. Since my horses are a hobby, not a business, the target was evidently going to be – as last time, when I disposed of Gwen – the non-racing horses; since I am in the game to have my horses around me, the obvious ‘victim’ was a broodmare I have only ever seen in the flesh once in my life, my sole galloping interest: the Australia-based Rosmarino.
I’ve been part of Rosmarino since Barry bought her from a sales agent half a dozen years ago. She gave us a splendid time as a racehorse: as a broodmare she has been perhaps unlucky but ultimately – and in spite of Barry’s hugely skilled management -- unsatisfying. Also exceptionally expensive. The racehorse world in Australia plays its games with several more zeroes on its end than trotting in New Zealand or even France. Or even Australia.
Because we six chaps have been a ‘team of pals’ for eight years, I hesitated – in spite of the crying logic – to break up the syndicate, but when I was here last time, I found I was not the only over-stretched member anxious to end the story. And so, both Rosmarino and her More Than Ready foal, Leo, are up at the Inglis sales, this week and next.
Yesterday was Leo’s day. Estimates among our team as to his value (irrelevant and subjective) and likely sale price (practical) varied so hugely that I stepped out of the numbers game. For me, if the horse made a profit on our outlay, that is, in these times, good business. 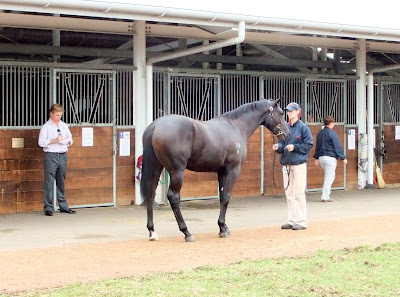 We went to see the boy in his box. A really splendid looking colt, unfortunately (but irrelevantly) hair-scarred where his baby leg was ‘straightened’ soon after birth. But I was dreadfully taken aback at the lack of style, of professionalism shown by the agents – the farm to which over the years we having been paying indecent amounts of agistment money – in showing the horse. I wanted to telegraph Wendy to get over here zippo and show them how to do it. 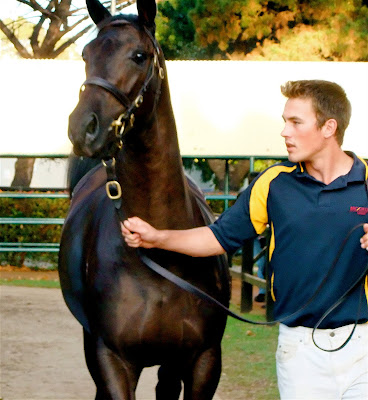 Still, when he came into the ring, Leo looked very fine, and the bidding started in lively fashion. In the end, he ‘went’ for $90,000. I say ‘went’ because he was actually bought by some members of our own syndicate. I’m glad for them, glad that they will be keeping this most handsome member of the family, and I’m glad for me that I’m out, and no longer stretching my wallet in this game which isn’t really mine. I shall watch Leo’s progress with exactly the same interest and joy as if I were ‘in’ … but from my possie on the other side of the fence: in harness racing, where I belong.
Next Wednesday, as I am setting out to see the Zarah Leander Show in Berlin, probably on the back of Kevin’s moto, it will be the turn of Rosie the mare to go under the hammer. And at the end of that day, 14 April, my eight year adventure in the world of galloping racing will be over.

Happily, just as this happens, my trotting interests are steaming, at last, back into action. This Sunday I shall have two babes running – one on each side of the world. Fritzl is in action at Bank’s Peninsula, NZ, and Ténor heads to Caen, Normandy… where the tripe comes from..
Caen is, of course, only a night-ferry trip away from the Isle of Wight .. so come June and July, if such a thing should happen again, a little voyage across la Manche may be in order..
In the meanwhile thank you Rosmarino, thank you Barry and the Rosmarino Inc boys, for a fine adventure, and .. on to the next one!
Allez, Ténor!
Posted by GEROLSTEIN at 4:53 PM