.
The ‘Sydney syndrome’ seems still to be working. My little family of horses seem to do their best when I am in the Sunny City by the Sea, rather than on the racetrack with them, or even when I am in their respective countries..

Yesterday, it was Fritzl’s turn. Since his interesting third – ‘Duchess’s first divvie’ – at Ashburton, he has had two starts: a hiccup at Bank’s Peninsula and a ninth place in – wait for it – the New Zealand Derby! Well, why not? He may have finished 18 lengths off the record-breaking winner, but he beat home several of the most highly regarded juvenile trotters in the country and, himself, clocked a time only 2 seconds off the new record.
As a result, I was pretty surprised to see him untipped and unpunterishly loved as ninth favourite for yesterday’s fifteen-horse maiden trot on the grass at Motukarara. Here, in Sydney, he was even less loved, except by me -- and by Barry who punted a fiver on him for a place. I was confident of a cheque and, in spite of the presence once again of Zealous Lady in the field, I would have been disappointed with less.

Well, I wasn’t disappointed. Far from it.
Fritzl made a fine beginning from his number nine draw and settled, as at Ashburton, neatly in the one-one. A determined front-runner (which displaced Zealous Lady, also well away, in command) kept everyone running along at a fair pace until the home straight, when the compact field (barely a breaker!) splayed out across the track ready for the final explanation…
Fritzl popped neatly out from his perfect position and headed staunchly for the line. Momentarily, it looked as if he might win, momentarily, I believe, he even hit the lead, but Zealous Lady had been ideally cuddled away on the rails and in the final metres she popped prettily through the middle and – as last time – nailed Fritzl in extremis.
So – after his fourth in the Trotting Stakes, his third at Ashburton – Duchess’s little boy has posted his first runner-up position.
And Barry picked up $80 for his five dollar bet. Australian form followers evidently hadn’t weighed up maiden trot form against Derby form, and the wee lad paid $16.40 a place on the NSW tote!

Here is the finish .. that’s Fritzl in the middle with the scarlet chest band .. compliments of Race Images… 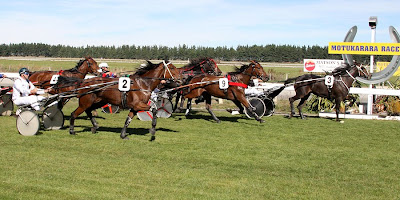 I think Fritzl has to be odds-on to become -- before too long -- Gerolstein’s first home-bred-and-born winner. But watch out! Seppl is waiting in the wings, hopefully only a month or two away from making his debut…
Posted by GEROLSTEIN at 6:02 PM