I found this photo this morning. 'Miss D'Alton' ... or "Miss D'Alton". Since the only Miss D'Alton born in England in the nineteenth century was a Hannah, born fatherless in a workhouse in 1859, I immediately guessed that this was the Irish mezzo-contralto who operated as "Helen D'Alton" .. 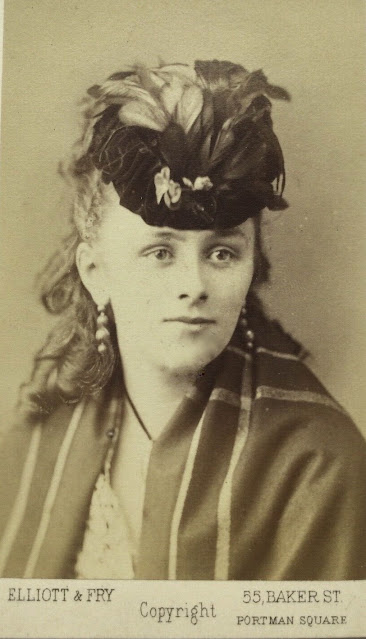 And since I had her biog tucked away in the back-brain of my computer 'Victorian Vocalists Department'. I thought this might be convenient moment to bring it out ..

'One of the purest contraltos to which the sister isle ever gave birth' (The Standard, 1874).
Irish mezzo-soprano who found success as a ballad singer in the 1870s and 1880s.

Miss Shea studied singing with Mrs Charlotte [Sims] Reeves, and came out, for what seems to have been the first time, under the name of Mlle Hélène D’Alton (an improbable, but Irish high-society, surname), at an Ash Wednesday Concert at Drury Lane, 10 February 1869. She gave ‘Il segreto’, ‘O Rest in the Lord’ and joined the Doria sisters in the Athalie music. 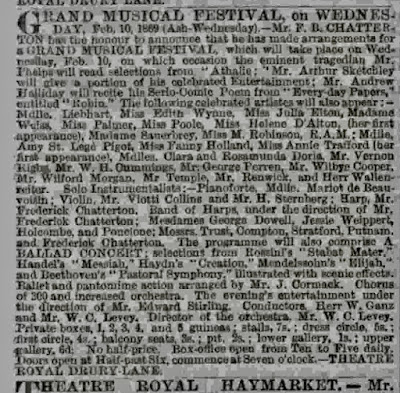 Later in the season (31 July), she sang at the Crystal Palace, alongside Christine Nilsson, Clarice Sinico, Vernon Rigby and Foli, and was favourably noticed as ‘a young lady with a very pleasing contralto voice who sang touchingly the devotional air ‘O Lord, Thou hast searched me out’ from The Woman of Samaria and ‘Gentle troubadour’. The Morning Post confirmed ‘[she] ‘sang her two airs most beautifully. She has a remarkably touching quality of voice and her style is polished and confident; her voice, a mezzo-soprano of unusual clearness, travelled to the extremity of the transept with brilliant effect’.

Mlle D’Alton was engaged to appear at George Wood’s Saturday Evening Concerts at Exeter Hall in the new year, alongside Reeves, Santley, Foli and Mlles Sinico and Monbelli (‘The Gipsies Home’, Barnett’s ‘Old Familiar Friend’), after which she accompanied Santley, Mlle Sinico and another pupil of Mrs Reeves, Annie Edmonds, to Ireland (‘the Santley concerts’) and on 17 February 1870 made her first professional appearance in her home town (‘The Gipsies' Home’, Levey’s ‘Baby Mine’ and ‘Come Home, My Sailor Boy’, Blumenthal’s ‘When we are parted’, ‘Sainted Mother’ with Miss Edmonds). The reviews paid homage to her late father, and Ireland confirmed: ‘This young lady has a voice of great richness, uncommon compass and fine free tone. She sings with judgement, proves a good education, and excited a genuine admiration. She is likely to be very successful.’ ‘She always sings with truth, has admirable restraint, never exaggerates, and is sure to please’. 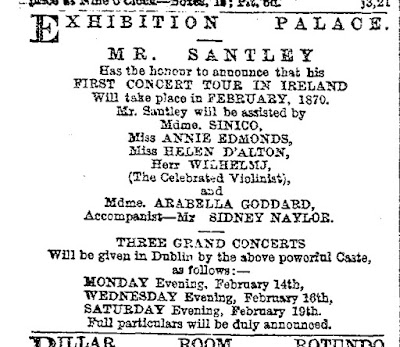 Back in London, Miss Helen D’Alton was billed with another young Mrs-Reeves-trained vocalist, the Scottish Jane Allan Stephen, in Sims Reeves’s Benefit concert (18 March), and over the following seasons, the said Miss D’Alton would appear, on frequent occasions, on concert bills in which Reeves was starred, both in London and in the provinces.

In between, she appeared at the Crystal Palace (14 May 1870) with the stars of the Italian opera, at the Glasgow Saturday Evening Concerts (‘Scenes of youth’, ‘Rich are rare were the jewels’, ‘Looking Back’), and made a single Ash Wednesday appearance at the Boosey Ballad Concerts (22 February 1871, ‘The Blind Girl’s Dream’ with ‘genuine feeling and expression’, Hawes’s ‘I’ll speak of thee’ and ‘O’er shepherd’s pipe’ with Santley). She gave her ‘Blind Girl’s Dream’, alongside Reeves and Santley, at Leicester, and, on 29 April 1871, she sang the title-role, alongside Mme Lemmens-Sherrington, Reeves and Patey, in Roeckel’s cantata The Fair Rosamund at the Crystal Palace and, the following year, his The Sea Maidens ('Maiden Muriel'). At Mr Austin’s concert she sang ‘I dreamed I was in heaven’ from Naaman, and she ventured wholly into oratorio with a Messiah with the National Choral Society, the Rossini Stabat Mater at the Covent Garden proms, an Israel in Egypt with Reeves at the Sacred Harmonic Society and in Carter’s Evangeline at the Albert Hall. 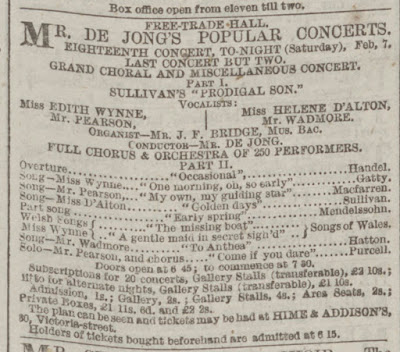 The oratorio experience was evidently not wholly convincing. Over the years that followed, Miss D’Alton would appear, on occasion, in oratorio – from The Messiah (‘scarcely seemed equal to the contralto music’, Manchester, 'scarcely powerful enough for so large a hall' Birmingham) to The Light of the World and The Prodigal Son (Manchester, 7 February 1874), Judas Maccabeus at Bristol, Jephtha/Last Judgement at Cardiff  -- in the provinces, but her frequent London engagements were almost entirely in concert, where her evident speciality was modern ballad music. Pieces such as Mme Sainton-Dolby’s ‘He thinks I do not love him’, Sullivan’s ‘Golden Days’, The Distant Shore’, Looking back' and ‘Will He Come?’, Odoardo Barri’s ‘Mizpah’, ‘Love’s Golden Past’ and ‘The Shadow of the Cross’, Virginia Gabriel’s ‘A Shadow’, Gounod’s ‘Oh that we two were maying’, ‘Meeting Again’ by Cotsford Dick or Charles Salaman’s ‘Eva Tual’ and ‘Loved One’ were delivered in her ‘tuneful contralto voice and unobtrusive style’, her ‘excellent contralto voice and unaffected style’, to good effect. Very occasionally an operatic piece – ‘Ah! s’estinto’, 'Araby, dear Araby' or ‘Quando a te lieta’ – would appear alongside the new ballads, and the classic ones ('The Harp  that once through Tara's Halls, 'O, Erin my country', Samuel Lover’s ‘What will you do, love?’, 'John Anderson, my Jo', 'By the sad sea waves'), a little more frequently an item from oratorio (Hiller's 'Lord, whom my immortal soul'), but rarely did Miss D’Alton venture into the world of the dramatic. I spot her, in 1874, singing in a selection from The Bohemian Girl at the Albert Hall, in 1875, during a modest appearance at the Norwich Festival, as a late replacement, she sang in some pieces of a local operetta, The Science of Love, and in 1878 she took part in a concert performance of Il Trovatore at the Royal Aquarium: beyond that, I find nothing. 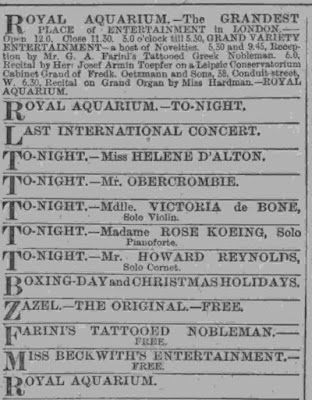 Miss D’Alton, in fact, became quite a regular at the Royal Aquarium where, apart from ballads and the ephemeral operatic experience, she also sang several times in the Stabat Mater (alongside the fireworks and freak shows), and she became an equally familiar presence at the promenade concerts staged annually at the Theatre Royal, Covent Garden. She took part in these ‘proms’ as late as 1887. On several occasions, too, she appeared in the prestigious Boosey Ballad Concerts (‘My Love has gone a sailing’ by Molloy, Linley's ‘Primroses deck the bank's green side’, ‘The Bailiff’s Daughter of Islington’), but without becoming a regular participant. 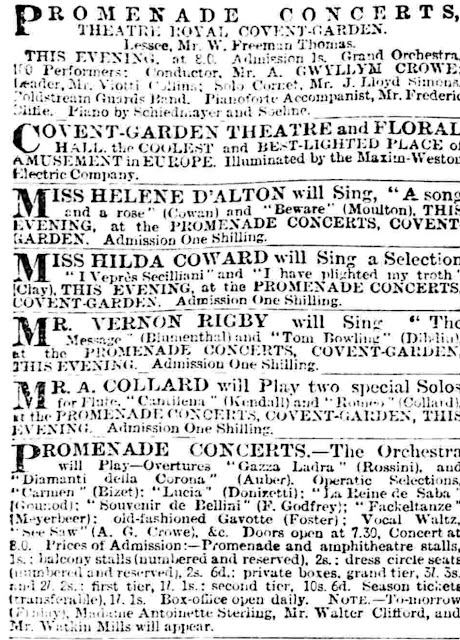 For a number of years, the 'clever and popular young vocalist' went on the road with Sims Reeves, in varying concert party combinations, alongside Gertrude Cave-Ashton, Foli, Agnes Larkcom et al – and again with Edith Wynne – but her name appeared, it seemed, most frequently on the ballad sheet-music which flowed from the various publishers’ lists: Cowen’s ‘The Better Land’, 'Love and Duty' and ‘A Song and a Rose’, Molloy’s ‘The Old Street Lamp’, ‘The Harbour Bar’, Ignace Gibsone’s ‘The Missing Ship’, Roeckel’s ‘Poppies in the Corn’ and 'A Midnight Song', Stephen Adams’s ‘In heart we both are young’, ‘The Children of the City’ and ‘True Hearts’, ‘I cannot forget’, Blumenthal’s ‘The Old, Old Story’ and ‘Lucy Gray’, Moulton’s ‘Beware’ and ‘I love my love’, Fanning’s ‘Something sweet to tell you’, Campana’s ‘Her Faithful Heart’, Milton Wellings’s ‘Young love that slumbers’, Owen Hope’s ‘In Happier Days’, Caroline Lowthian’s ‘Gates of the West’, Malcolm Watson's 'A Winter Story', as an adjunct to Antoinette Sterling on ‘The Lost Chord’ and to Mme Sainton-Dolby on a number of songs, and, latterly, on the songs of Isidore de Lara ('The Garden of Sleep', 'Once and For Ever'). As late as 1889, Miss D’Alton appeared on the bills of the Monday pops, with a new song by Maude Valerie White. 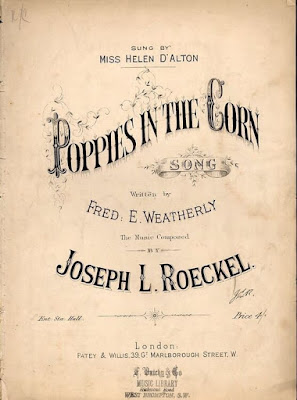 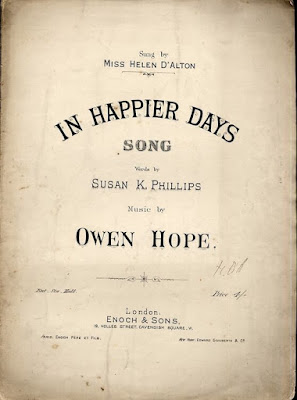 By the middle of the 1880s, however, she was appearing much less in public and, apart from the Covent Garden proms, largely in charity concerts and on fashionable society programmes. By the time, in 1889 (14 August), that she became the wife of Mr Fallon Percy Wightwick MD MRCS LRCP MB, a well-known medical man, she was appearing only a handful of times a season. 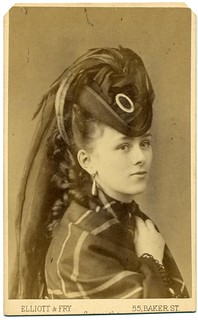 ‘Helen D’Alton’ died just a few years after her marriage, and her obituary insisted that she was ‘a few years ago a highly popular contralto vocalist’. Which was more or less true. ‘Tuneful contralto voice and unobtrusive style’ had probably described her better.

It also insisted that she was thirty-eight years of age. Which was not true at all. She (vocalist, aged 20) and widowed mamma (52) can be seen lodging in Salisbury Street, Westminster in 1871 ... 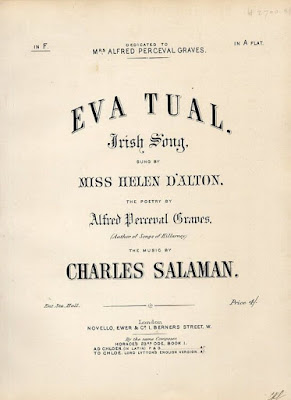 Posted by GEROLSTEIN at 9:15 PM

Thank you for this interesting article and photographs of this beautiful singer. Fascinating, and you've done a great deal of excellent sleuthing. I am wondering why in the last paragraph you make light of her abilities when her reviews have been quite good? My impression overall from the review quotes was that she was quite talented and pleasing as a singer. It seems likely that her less frequent appearances in later years may be due to something other than diminishing talents. In any case, I enjoyed your post a great deal and look forward to reading more. Your research skills are formidable!