Walter, Walter, lead me to Gibraltar ...!

Actually, it is Edward, but that didn't rhyme.

And I haven't been to Gibraltar since 1973. I was working on the SS Northern Star, cruising in the Mediterranean, and we stopped there once. Alison's mum was born there, so we decided to go ashore. I remember thinking it was rather scruffy and glum, and the celebrated monkeys all looked as if they had infectious scrofula. I've learned a little about the presqu'île's history since, and I wish I had swotted it up before we went there, rather than after ..

The last couple of days have been rather désoeuvrés. Book finished, delivered to the publishers, next one not ready to start for a week or three. Can't go outside too much, with all the white stuff from the trees flying about, ready to reduce me to a sneezing, itching rubble ... so, a bit more clearing out, a bit more redecorating the skite wall, vaccuming, washing, a massage ... and a wander down ebay way.

As soon as I saw this darlin' lookin' chappie, I wanted to investigate him! 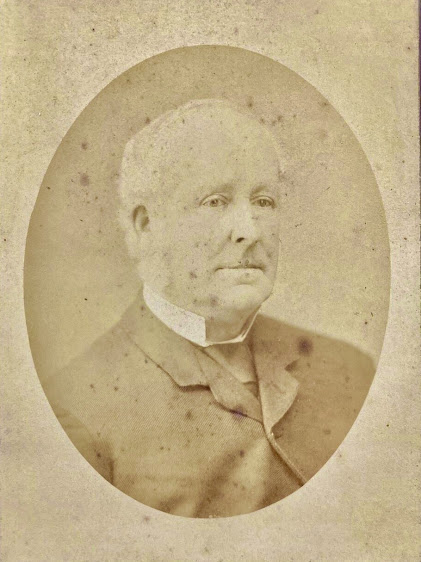 What was he, I wondered. A nice, kindly schoolmaster, maybe? Or just a small-town country gentleman. Turn over the photo .. 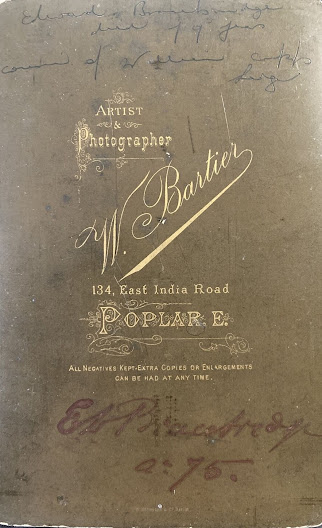 Oh. Poplar. Not a country gent, then. Seventy-five years of age, eh? More or less the same as me. Now to decipher the name. Edward B **** died aged 79. But he has a middle initial in what seems to be a signature, below. And what's the other line? Cousin of William Cupps Singer? Well, here we go.

Two working days later ... yes, I have him. And the cousin. But it has been a heck of a job. And most of the details are complete except ... I can't find the cousinship link. I started strongly. The B-squiggle, I decided, was Bracebridge. Not millions of those. And up he duly popped: Edward Ledger Bracebridge, architect and surveyor, of 136 High Street, Poplar. Poplar? Oh, dear. East End slums? One wife. One surviving child ... we're on wheels! Born c1815 in ... Gibraltar. Ouch.

Ah! So the last name of the cousin isn't Singer, it's Ledger. William Cripps Ledger. The Reverend. And here he is! Born Limerick 18 July 1827; d Rathgar 30 May 1920. Second son of Zacaria Minnet Ledger, of Gibraltar, but latterly a stationer and bookseller in Limerick, and his wife Mary née Cripps 'of Limerick'. 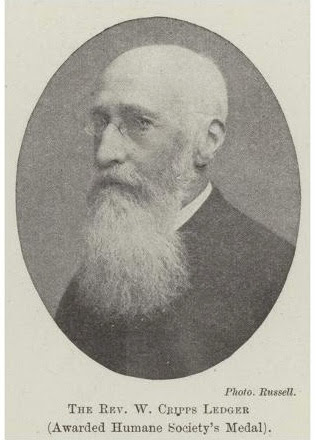 OK. The connection clearly lies in Gibraltar. But where? And why did Edward's parents, already, in 1815, name their first son 'Ledger'. Well, I spent a bit too long on the Ledgers. I don't know why they left Horne, Surrey in the C18th to go to Gibraltar. Military? Merchanting? Profiteering? Smuggling?

So. The Bracebridges then. Mr Edward Bracebridge sr was born in England. I can't be precise about where, but it was around about the year 1784. At the age of 24, he left Albion's shores and made his way to Gibraltar. As a soldier for the garrison? I think not. Mr Bracebridge was a painter. I think, also, he was a man of some comfortable means. Maybe something of a lotus eater? But why Gibraltar? Why not Tahiti or the Greek Islands or the French riviera? So be it. Two years after his arrival he took to himself a nineteen year-old wife, by the name of Jane Diego. Jane, too, was professedly English-born, but her family had arrived on the rock when she was some six years of age.

So Edward painted, and created an apparently splendid set of gardens in the Southern District of Gibraltar, at the place called Buena Vista. Edward Frederic Kelaart noticed them in his book Flora Calpensis: Contributions to the Botany and Topography of Gibraltar in 1845. 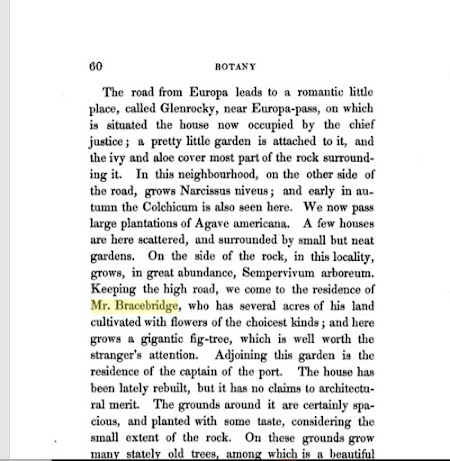 Several acres at Buena Vista, eh? He'd be a zillionaire today, now that the area has become a blurge of elbow-to-elbow 'posh' 21st century housing.

Edward left Gibraltar for England, seemingly, as a teenager, to study architecture. The first time I spot him is in 1840, and he is getting married. He is dubbed 'of Broadwindsor, Dorset' and his bride is a Claines girl, Anne Jones, daughter of John Jones, grocer. Thereafter he is credited with a number of church restorations -- Blackdown Holy Trinity (1840), the nave of Chiselborough Church (1842), the rebuilding of the nave of the Church of St Peter and St Paul, Stoke-sub-Hamdon -- as well as with the plans for the Theatre Royal, Gibraltar (1847). He settled in Poplar, became a stalwart of such as the Poplar Union, the Poplar and Limehouse Literary and Scientific Institution, the Tower Hamlets Constitutional Association, a supporter of the Conservative working man, and architected. The Sailors' Home in Well Street, London Docks, the Strangers' Home for Asiatics, Africans and South Sea Islanders ('a handsome structure in the Italian style'), 'new workshops for the schools in Forest Gate', St Stephen's National School, Speeding's Gardens ... He seems to have been an excellent, practical architect on utilitarian and public buildings, and I see his designs praised on several occasions for their excellent 'use of space' and comfort .. pretty well in budget!. 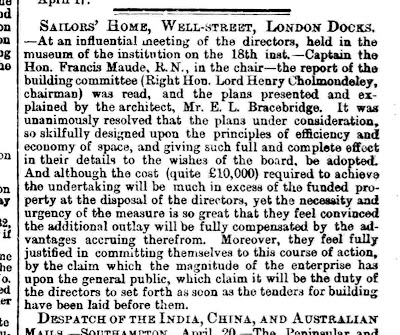 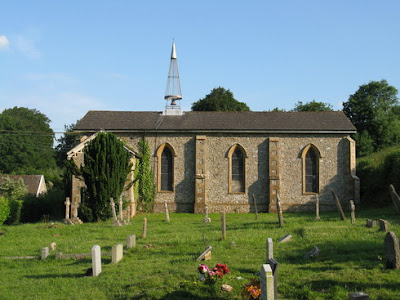 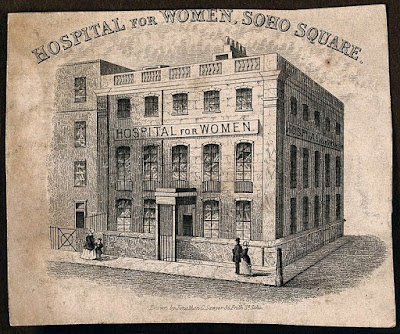 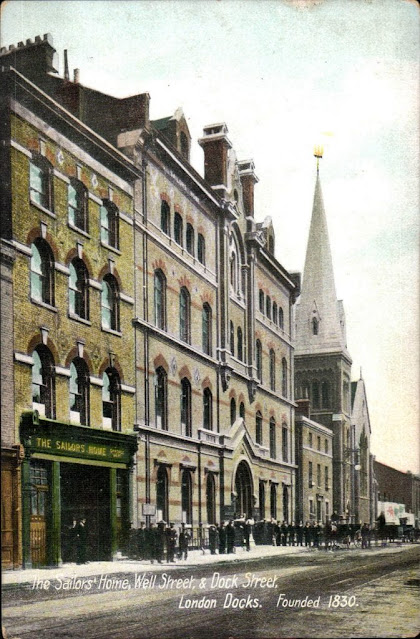 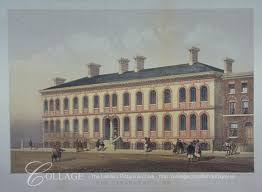 Edward and Annie apparently had four children, of whom only one, Jane Alice Ellen (b Barnsbury 1846; d 1919) seems to have survived. She became Mrs Charles Edward Challis.

Edward Ledger Bracebridge survived his Annie, who had gone sadly deaf, and died at his longtime home in Poplar High Street 6 September 1892. He left an estate of 1,655 19s 0d. So, what happened to the acres in Gibraltar? Well, we get a tiny glimpse in the British legal notices half a dozen years after Edward sr's death

Yes. I came on that list AFTER I had done all the winkling out. Few things therein which puzzle me an iota. Why is William listed before Edward ... the girls are in birth order. William seems to have been father's preferred. Poor William. He too came 'home', became a 'merchant' 'of Lonsdale Street', and died 29 July 1873.

Mother Jane outlived him, in Gibraltar, in a property on the road from Buena Vista to Wind Mill Hill, in the company of her unmarried daughter, Ellen. Ellen was still there, alone, in 1891 ... I think the Bracebridge Gardens were already gone.

Well, I've done ten times better than the family historians, but I still haven't found the Ledger 'cousinship'. Not surprising, I suppose, since that lot seem to have been a bit peripatetic: the eldest son hooted off to Australia and .... no ... enough. My search was for that nice warm-looking man above: and I've found him. At 136 High Street, Poplar.


Addendum:
I notice that Edward's English will was probated by the London representative of Jerome Saccone. Saccone? Wine merchant. I bought a bottle of sherry at Saccone and Speed during my brief stopover at Gibraltar. Did Edward then dabble in the wine trade, or was Mr Saccone just a friend?

Addendum (2) (this family lends itself to addenda!)
Edward sr just may be the Edward Bracebridge born in Epsom and baptised there 30 January 1784, son of a licensed victualler and vintner of the same name and his wife Mary. We can wipe out the watchmaker from Clerkenwell ...

Addendum (3) those Ledgers. Zacarias (or Zachariah) apparently had four sons: Zacharias Joseph L, Robert Hastings L, James Campbell L and our straggly-bearded Reverend. Robert ended up in Australia where he died at Wollongong 23 July 1882, James (d 23 November 1889) was a memorable civil engineer in India, and the Reverend outlived them by decades. Zac's daughter, Mary Elizabeth was Mrs Wm Harley Moore. No Bracebridge conection anywhere there. Have to try an earlier generation.

So.. another (Irish) Zacarias. Ah! Well, now we know what the Ledger family's Gibraltar connection was. 'Leader of the Methodist mission'. 'Receiver and issuer of stores'. Oh dear, it seems he went home to Limerick and ... is he the protestant Zacharias whose house was attacked and burned by a bunch of yobbos ... ? Or rather the Zac 'formerly of the Ordnance Department' (ah-hah!) who died 'at an advanced age' in 1837. But I'm getting off track: none of that helps find the cousinship ...

Posted by GEROLSTEIN at 9:25 PM