A strange morning. Request from my publishers for regurgitable rave reviews of my past books. Well, I think I have just about every one ever written in the 1980s and early '90s. Not that *I* saved them. But, the day the first ads and flyers for my very first adult book came out, the memorable Maisie Fielding presented Ian with one of the vast press-cutting books, beautifully bound, which the Fielding office ordered, in quantity, to hold the records of their various shows and seasons. 'Fill that' she grinned imperiously, as only Maisie could. Oh, Maisie, silly us, we only used one side of the pages, little realising that I was getting into A Career in Books. By book four, the album was bulgingly full ... and I more or less stopped clipping. And you were gone.
Today, I had to go back through the pages of that album and pluck out some quotable quotes. Oh dear, all those incredibly marvellous things that men of the stature of Michael Coveney ('book of the year'), Clive Hirschorn, Robert Cushman, Benny Green, Andrew Lamb, Arthur Jacobs et al said about my work! Lovely letters from Vivian Ellis, Sandy Wilson, Julian Slade, Tim Rice, David Heneker, Alex Cohen, Julia Mackenzie, from the British and American Libraries Associations bearing awards ... and a telegram from dear Gerry Bordman (American Musical Theatre), post-my Encyclopaedia, saying 'you are now indisputably Number One'. Silly man. If it hadn't have been for him, I would never have ventured... 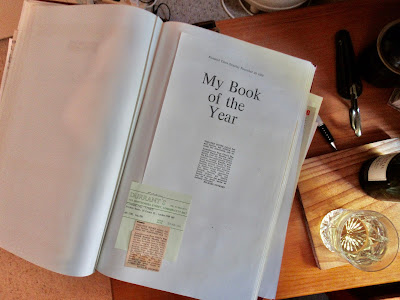 Anyway, I snipped some suitably over-the-top phrases, sent them off to New York, shoved the album back on the topmost shelf, and ... felt, suddenly, rather deflated. And dreadfully sad. Oh, no, not because one can't be a Wunderkind all one's working life. But you see, today is 5th November. Exactly fourteen years ago tonight, here at Gerolstein, my darling Ian breathed his last ...

I can still see him laughingly pasting the first notices in the album. I think, maybe, today of all days, I should have got someone else to have reviewed my reviews.

So ... when feeling low: e-bay! Get into someone else's life ...! What shall it be? Well, among the very first places I visited when, the formalities completed, I fled off round the world were Leicestershire (to see little brother) and the Isle of Wight (to be alone on a hilltop). So Leics and IoW? ... here were a couple who seemed exactly to fit the bill: from Leics and photographed in Ryde ... 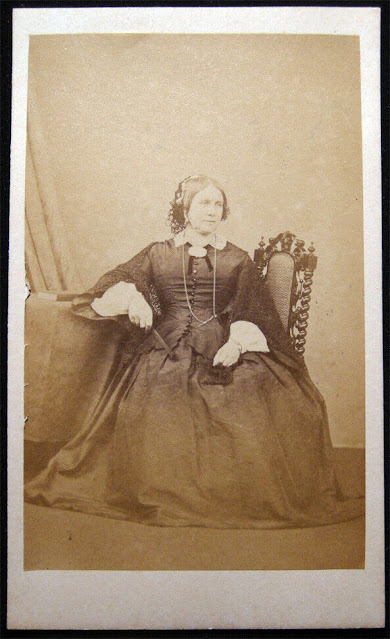 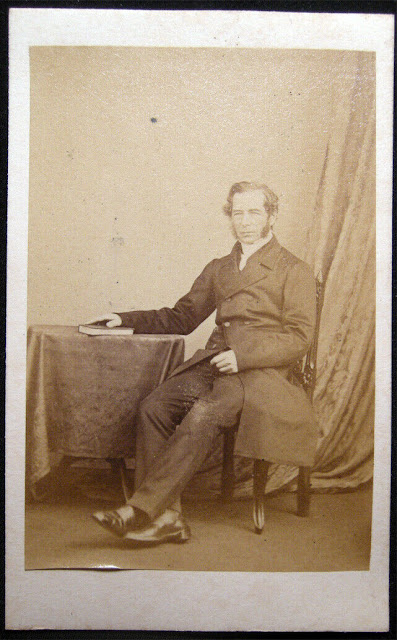 Somone has scribbled across the album page 'Leicestershire 1862'. The vendor describes the couple as the Rev William Gibbson and Mrs Rev W Gibbson. Another ruddy Rev? No. He is actually wrong, on all counts. But it's not entirely his fault. Because the inscriber has got his facts wrong too ... scribal error down the generations!

Firstly, it is not Gibbson. I know a 'b' when I see one. It is GILLSON. Secondly, he wasn't a Rev (hurrah!), he was an Esq. His younger brother (as befell younger brothers) was ladled into the clergy. And his name was Edward. So... I doubt that the inscriber knew them. Them?

I reckon we have here William Hall Gillson (b Greetham, Rutland 1796; d Barsby Lodge, Ryde 29 February 1880). He doesn't look 65 in that photo, does he? His wife doesn't look 60. Misdated? Wife: Maria née Goodacre of Ullesthorpe, daughter of one of two largest landowners, farmers, graziers in that area. The other? Why, Mr William Gillson, father to her new husband. The couple were married 26 October 1819, and the future of Ullesthorpe was sealed. They had two children: both daughters.

The Gillson family had been for generations large farmers and graziers, sherrifs and high sherrifs etc in Rutland and Leicestershire, and had clearly married into equally land-rich families: I see an 1800 will in which an aged Elizabeth Cole names father William and his brother John her executors for a healthy wad of land, shares and cash, to be shared among her Gillson grandchildren. And grandfather William 'of Oakham' in his will, around the same time left 'Property at Greetham, Barsby, South Croxton and Ashby Folville to his son William. That at St. Martins Stamford Baron, Braunston, Leighfield and Market Overton, Rutland and Knossington, Leics. to his son John Cole Gillson, interest in a shop in London to son George, £1,200 to son Thomas...' Land rich, all right!
And William the next seems to have even increased their holdings. When he died ...

But the sons of William of Greetham then of Ullesthorpe apparently didn't continue the farming and grazing activities which had made their fathers rich and prosperous. In fact, our Mr W H Gillson doesn't seem to have actively done anything. He describes himself as 'independent'. By 1835, I see him already in the Isle of Wight, living/staying at Arreton. Goodness, I wonder if he was at that nowadays hideously tourist-trapped 'Arreton Manor' (see my 2008 visit blogged at https://kurtofgerolstein.blogspot.com/2008/06/three-as-in-one-day.html).
In 1858, after William of Ullesthorpe's death, William H, his wife, and daughters moved -- after several Wightish homes -- to a new-build in Pelham Fields, Ryde, which they christened Barsby Lodge, after their former lands in Rutland. 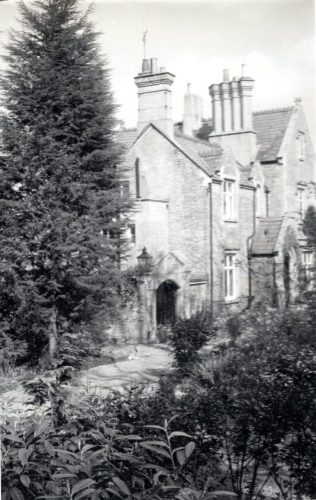 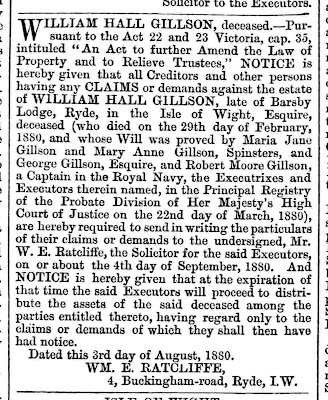 And their home went under the hammer .. 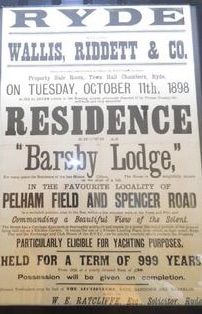 The Gillsons ran Barsby with just a cook and one maid. I hope it hasn't suffered the fate of so many Victorian family homes, and been turned into a Bed and Breakfast place. Or, worse, apartments. I hope it has a family in it. I see it valued on the www at a bit over (estimated, of course) a million pounds, so maybe it is still entire.
There! I'm feeling quite cheerful again. Even though, alas, I will never see my beloved Wight again. I must get my friend Debbie Robinson to pop down and photograph Barsby Lodge 2021. Someone already did the family tomb: 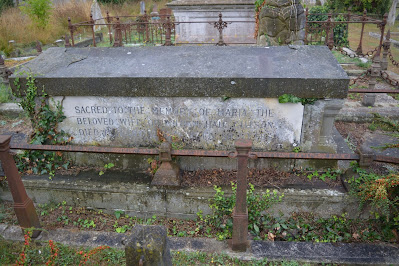 It looks as though the Gillson family don't care for the memorials to those who made them rich. But that's the way it goes.
Now, iced chardonnay, under Ian's photo, in our drawing room ... and I've had a pretty full 'fifth of November', here and in the beautiful Isle of Wight ... 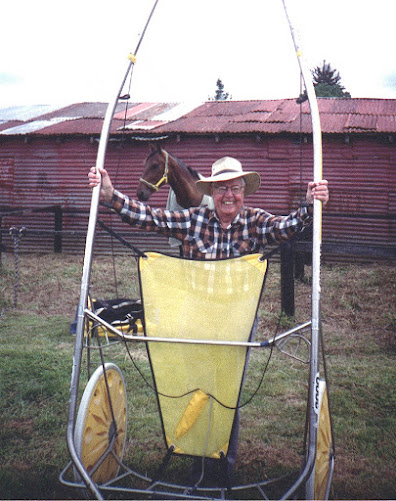 Posted by GEROLSTEIN at 9:22 PM