Well, what a farrago I got myself into today. Out of my field, out of my period, into a whirpool of lies and worldwideweb false statements ... more showbiz mythology falsely crystallised for (semi)eternity!
And all this because ebay didn't turn me up any nice new pictures today. And because it didn't I had a nice wander through the sheet music ... there! I fancy that one! Good old Blackpool North Pier. Nice bit o' pierrots and semi-professionalism ... 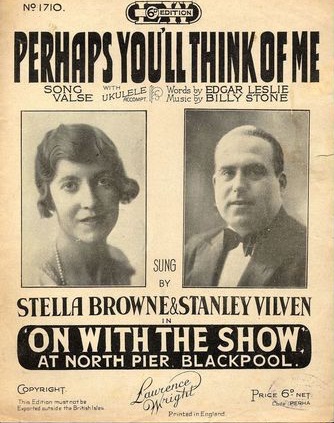 A plumpish tenor, and a soprano with no style, just pearls and a provincial hairdresser. And a ukelele accompaniment. I imagine they disappeared from showbiz annals pretty quickly. Oh, no. How wrong can you be.

On With the Show (1927, second year) was your typical end of the pier show. One sop (above) one tenor, one comedian, Fred Walmesley, Mr Walter Williams (manager) and Miss Winnie Collins, 'the Irrepressibles .. Irene and Phyllis', the six Fisher Girls, and Jan Rafini and his Band, in 'a concert party entertainment, under the direction of Ernest Longstaffe. One of a thousand like entertainments which thronged the seaside resorts of Britain in the 1920s and even until my day. Yes, I was offered a job on a pier in the 1960s ...

So who were Stella and Stanley, and what had they done before they came to Blackpool.

Stella was improbably christened Anita Stella Hilda Christine Brown, and she was born in Hackney 17 January 1904, the daughter of Samuel Arnold Brown, an insurance company branch manager, and his ?wife Anita Caroline. Yes, read my lips, pure-bred Stoke Newington. Not Brazilian, Swedish, French or from any of the other places she would later claim. I see her performing first in variety in the small print under Whit Cunliffe and Muriel George in 1924, and then not again till the 1926 edition of On With the Show with Thorpe Bates. At twenty-two, she had time to get a makeover. And she would.
Stanley was William Stanley Rouse Vilven (b 30 May 1891), the son of the well-known Bath florist, William Vilven. He was vowed to music and getting his name in the papers from an early age. At the age of eleven, a pupil at Kingsholme School in Weston-super-mare, he passed his Grade I and 2 music exams. Yes, that made the hometown papers! By 1904 he was a solo chorister at Bath's Christ Church, giving 'Hear my Prayer', 'O for the Wings of a dove' and 'Angels ever bright and fair' and other treble favourites, in concert. By 1910, working in his father's flower business, he was a tenor. I see him giving 'The Lord is my Light', 'How Lovely Are Thy Dwellings' et al at local concerts, and playing Luiz with the Operatic Society. 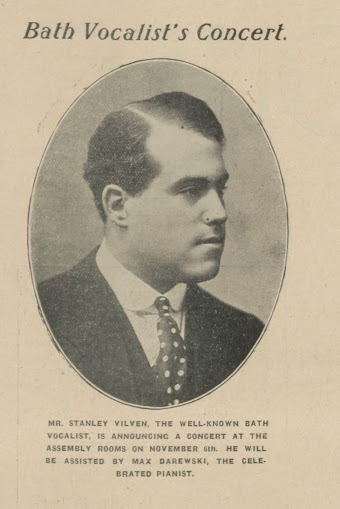 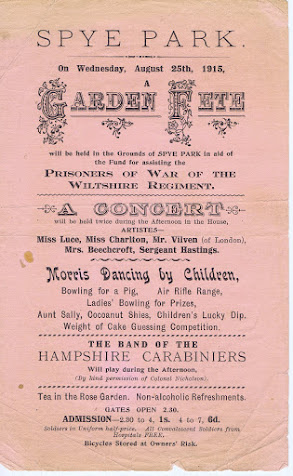 At some stage he took lessons with Plunkett Greene. In the war years (1915) he left England. He would later call it a 'world tour', but I think it must have been a non-singing one. He arrived back in England, from Natal, in 1920, and started his career in earnest. I see him first cast as Filch in a tour of the Lyric, Hammersmith The Beggar's Opera, then as Mr Ducat in Polly at the Kingsway, before, in 1925, he joined Walter Williams troup for a couple of seasons of the revue Ps and Qs. This led to On With the Show.
So there we are, nothing very remarkable, all round. But On with the Show turned out to be not quite your average seaside show. Not just for Blackpudlians. A recently-created organisation named the British Broadcasting Service was making waves, and had not long, by 1927, got the ability to relay live concerts to the corners of the country. And one that they chose was On with the Show, live from the North Pier. Stanley and Stella got more exposure than they could have dreamed of. Over the coming years, Stanley in particuar was heard on the radio as principal tenor in the Tommy Handley 'revues' and with the BBC light orchestra ... 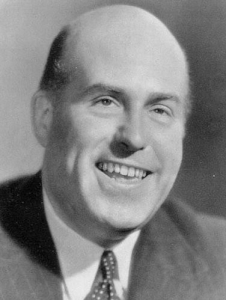 So, what did he go on to? An average but solid career in stage, radio, and latterly film. He played in The Rose and the Ring in London and onthe road, he played Cupid and the Cutlets on the Hippodrome circuit, he took part in the broadcast perversion of Love in a Village (as Love in Greenwich Village) with Anona Winn and two pianos, he appeared in the films Channel Crossing, Chelsea Life (1933) and Old Mother Riley in Paris (1938), visited South Africa with a dramatic troupe, joined the aged Seymour Hicks in It's You I Want and played in The Painted Smile at the New Theatre ...
In the 1940s I see him playing in Lady, Be Careful with George Gee and Chili Boucher, I Call it Love with Derek Oldham and Loreley Dyer, touring in Twin Beds and in See How They Run. In the 1950s, he is in the small print for the films Something in the City and Burnt Evidence. 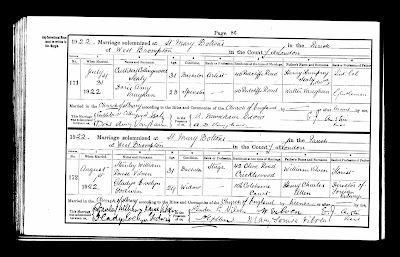 Stanley married the widowed Gladys Evelyn Godwin (née Allen) 1 August 1922. It seems to have been an uneventful marriage. They are still together in 1933, but seem to have parted before her death in Sussex Square, Brighton 11 March 1942. Stanley 'of Kenilworth Court, Putney' died 22 December 1963 in Putney Hospital.
I think he could have got a better photo for Lawrence Wright.
Stella was to have a much more eventful post-Blackpool life and career. 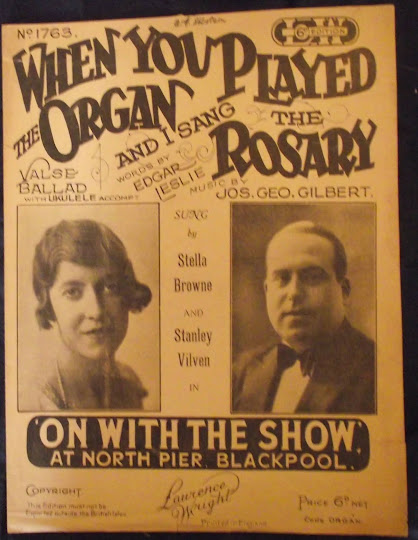 She carried on into more revue-cum-summer show with Julian Wylie, and then -- to the accompaniment of much bugle-blowing ('Better than Edith Day') from producer Edward Laurillard, she was plucked from a pier and cast in the leading role of Kathie in a Piccadilly Theatre revival of The Student Prince opposite Donald Mather. Unfortunately, London, which had already rejected the show once, rejected it again, and it closed after 60 performances. Stella returned to pantomime at the Dominion, with Ella Retford and Nellie Wallace  ('If archness be a virtue in Principal Girls, then Miss Stella Browne acquired inordinate merit; she certainly sang very well'). Exit 'Stella Browne'. Marriage, I pondered. No, she had been married since before Blackpool days to businessman Paul Daniel Comoy. The answer was: a remake.
The arch principal girl of the principal piers in Britain vanished from Albion's shores to -- I wonder why! -- Stockholm, where we are told that she studied with one Adelaide von Skilondz. She studied to such effect that she was engaged at the Stockholm opera, and is said to have made her debut there in 1932 as Gilda in Rigoletto, under the name of Stella Andreva.
In 1936, she voyaged to America to sing at the Metropolitan Opera House (Olympia, Waldvogel, Shepherd in Tannhäuser, Woglinde, Rosina with John Brownlee, Musetta. Philine, Dew Fairy) and she was reengaged there on occasion between 1940 and 1942 (Oscar alongside Jussi Björling, Papagena, Momus in Phoebus and Pan).
https://www.youtube.com/watch?v=7JP7JEiHRsA
In between, she sang at Covent Garden (Rosina, Esmeralda in Bartered Bride) returned to the BBC in a rather different capacity than of yore .. 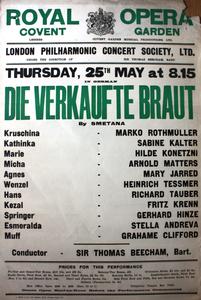 Tiens! Alongside Tauber and my old singing teacher, Grahame Clifford!
On the private side, she is said to have remained the (apparently separated) Mrs Comoy. It was as such that she applied for American naturalisation in 1943. However, an odd document exists which shows the Mexican marriage, at Chihaua, dated 21 December 1939, of Mrs Comoy with one Moses T Stark. Which this document seems to confirm: 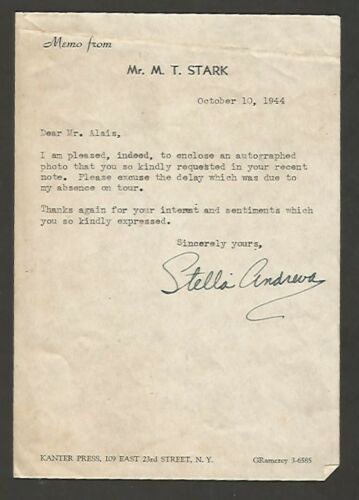 Well, all I can say is that she got a marginally better stylist in America 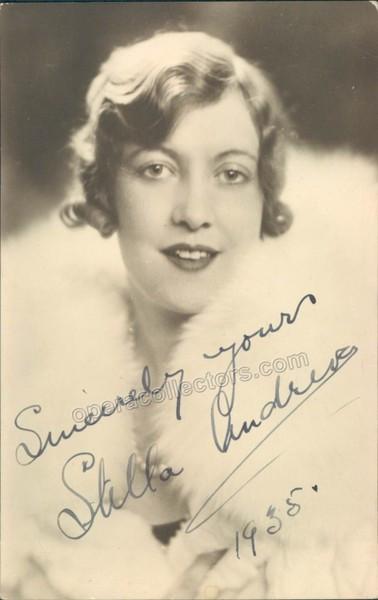 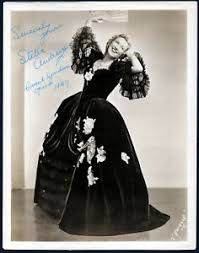 But only marginally. She clearly got a new life ... 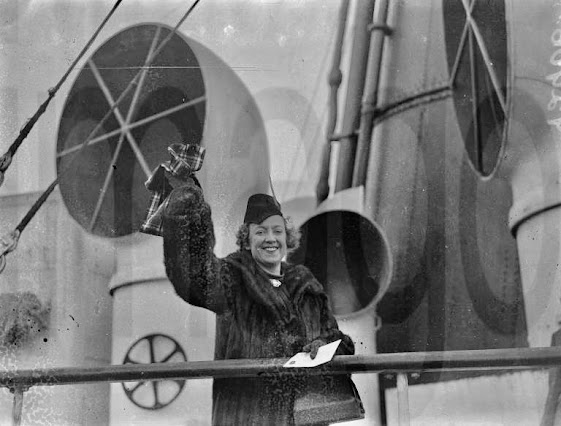 And, well, her operatic career, which Kutsch and Riemann ('strange errors have been known ...') have approximated in their large work, seems to have included all sorts of international dates. I just know that she was Tauber's leading lady in the unfortunate attempt to stage an English Das Land des Lächelns (Yours is my Heart) in New York in 1945.
I haven't followed Mrs Stark into the 1950s, though I see she has acquired a daughter, Nina. Presumably legitimate because Mr Comoy remarried in 1945, before his death in 1948. 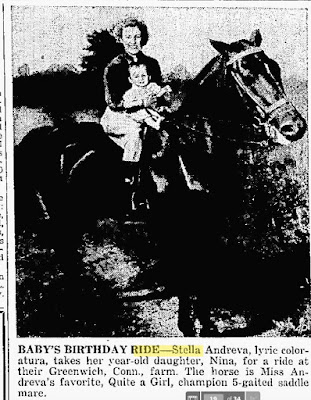 But, still, from Mr Vilven to Tauber and Björling is a mighty step for a soprano. As is Blackpool Pier to Covent Garden. Good on you, Nita. Example to young singers who want to start 'at the top'. Learn your trade in the provinces.
Well, Stanley and Stella have filled my day. And I love 'em both. 8.30pm, bottle of Selak's Reserve rosé and relax .. Midsomer Murders is more enjoyable than the (fake) news ...  and, tomorrow, back to the C19th!
PS there is a recording of Ballo with Björling and Milanov, where Miss Browne sings Oscar. See you tube. No Blackpool rock!
PPS baby pictured above in Miss Nina Andreva Stark (b 19 June 1943),  temporarily Mrs Andrew Lee Morris, of La Jolla, San Diego. Here she is in the Bryn Mawr yearbook. 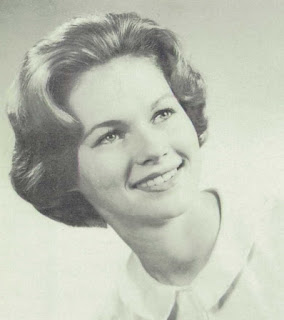