Henri the hero of the Halls

Today I've been been on a visit to 'the Halls'. And I stayed there a whole working day, because a little piece which I thought would be straightforward turned out not to be 'at all, at all'. I thought it would be straightforward because the photo I turned up was of a decidedly well-known performer, acclaimed in the 1870s as being one of the classiest and best comic singers in Britain: Henri Clark[e]. 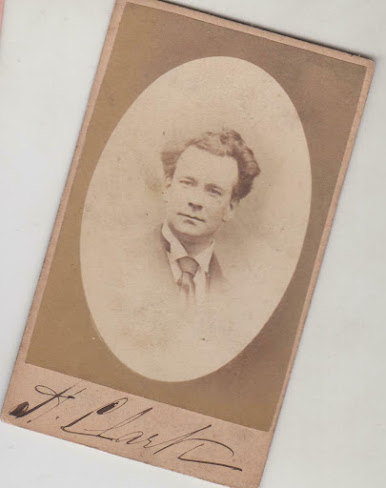 A quick check of the worldwideweb left me amazed. There is virtually nothing about him anywhere. Plenty of G H MacDermott, Vance, Arthur Lloyd, George Leybourne, Tom Maclagan ... yes, Henri was in their league. So why is he ignored? Well, you know how I love a challenge. Especially when I win. And I finally did win, so I shall tell you all about 'Mr Clark[e]'. Yes, those brackets say it all. The inconsistent spelling of a surname nearly always heralds 'pseudonym'. And it was.

The parents had already produced Elizabeth (19 August 1829) and Alexander (15 April 1834-seemingly d 1874). Tom would be their last and youngest. The family settled at 36 Gower Street, where father and Alexander upholstered, mother embroidered, and Elizabeth kept a shop. Tom was 'a scholar' in 1851, but by 1861 he has become 'tenor singer'. I wonder where. And under what name.

Well, it wouldn't be long before he became 'Henri Clarke'. Why. Well, there was a dancing chappie around in the early 1860s who called himself 'Eden Clarke'. He was evidently a perfectly good dancer, performing as a soloist in the minor music halls, and as a member of the Nottingham Theatre company (Harlequin, 1862). But in 1863 he changed his act: he became a ballerina, performing a Taglioni burlesque, and to top that off he gave falsetto 'imitations' of Grisi and Piccolomini. And he decided he needed a partner. Tom the tenor got the job. And, as the act was billed as 'the brothers Clarke', he became Mr Clarke. My first sighting of the double-act is in May 1864 at Cooper's Hall in Leicester's Gladstone Street, the next at Uncle Tom's in Bradford, and 18 July the 'brothers ... in their new and original burlesque sketches .. duettists and dancers' were on the bill at London's Sun Music Hall. Under the aegis of agent Ambrose Maynard they toured good dates thereafter -- Day's Crystal Palace in Birmingham, Manchester, Thornton's in Leeds -- until Henri apparently decided to go single.

Eden carried on his double act with another 'brother', and I see him last in 1866 doing a travesty Leah in the provinces. And Henri ... well, Henri was on the fast track to fame. But first ...

In 1866, among continued dates as 'the most Legitimate Comic Character Patter Singer of the Day' (advertisement), he went north for 'a tour through Scotland'. And while he was there, he married, at Tradeston, the teenaged Catherine Maud Oxlee (b Southwark 11 October 1849). Apparently a daughter, Catherine Elizabeth, was born the following year. Catherine, too, came from an upholstery family, but she was to turn out an adept performer.

Scotland provided Henri not only with a wife and child, but with a rather classy engagement. Louisa Pyne was doing a little northern concert tour, with her sister Susan, tenor Ambonetti and pianist Emile Berger. And for the comic element, Henri was hired .. 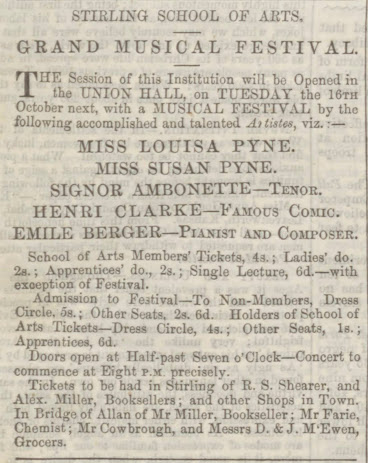 In 1866-7, he appeared in Scotland on bills with Edith Wynne, George Perren, Helen Kirk, Duncan Smyth,Gustave Garcia and Linas Martorelle, and even with the normally self-contained Harry Clifton party. His material seems to have been tried-and-true stuff ... 'The Musical Party', 'The Hurdy Gurdy Man', 'Kafoozelum', 'The Dancing Barber', 'The Singing Lesson' ... but he showed obvious class.
On the odd occasion 'Mrs Harry Clifton' appeared, too. I see them on a programme at Glasgow's Whitebait Rooms (with Lloyd, Leybourne, Maclagan and Georgina Smithson), and in another 'Scotch Festival' Mrs Clifton is advertised to perform a Highland Fling.

Between Scots engagements Henri went south ('the great provincial comedian') to make his London debut as a single, at Sam Collins Music Hall. The bill included Harry Sydney, Mrs Brian, Emma Kerridge and a little lady who would outshine them all in the end: Constance Loseby, here half of her double-act with her mother. Alas, I haven't found a notice detailing what he sang, but elsewhere he gave an uncredited piece called 'Rummy funny Indians' which survived a number of years in amateur concerts. His first big success was coming however.

In the meanwhile, he went 'double' again: Mr Henri Clarke and Miss Kate Oxlee went to the country through 1868. 1869 sees Henri back in town, at the Cambridge Music Hall, the Metropolitan and the Philharmonic. He has a new agent: the all-consuming Charles Roberts, and much success: ‘produces some specimens so far above the Music Hall style of comic songs that we expect to find him shortly taking a leading part in the highest circles of these places of amusement’. There was only one song that this critic didn't like: a piece by Fred Albert entitled 'The Mad Butcher' of which he disapproved on the ground that it made fun of mental 'illness'. Very twenty-first-century critic, eh? I wonder what he thought of Lucia di Lammermoor. Anyway, it was, of course, 'The Mad Butcher', with its mad-for-love hero, which became the big hit, and Henri's theme song for some years. 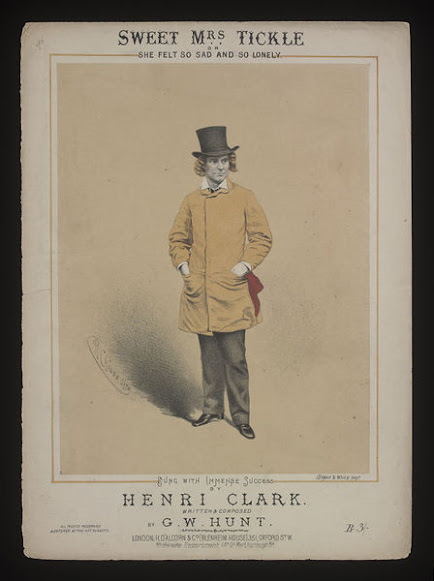 I've tried to track down as many of Henri's songs of the next couple of years as I was able: alas, most of them are uncredited, don't seem to be in any Collections, and are just names. But I can proffer 'The Frenchman's Tabby Tom Cat' (1870, G W Hunt) 'The Grocer's Boy', 'Tom the Tinker', 'Joey Jones the Cabby', 'The Recruit', 'The Ulster Wrapper', 'The Doctor's Boy', 'Dolly Dot', 'Cheerful Joe', 'Down among the Coals' (Hunt), 'Sweet Mrs Tickle', 'Mary Ann and the Waiter' and, most effectively, '[Come to] Peckham Rye', the story of a pious quaker, Zachariah, who invites a lassie to that sinful place after the hours of daylight. We know the author of 'Peckham Rye' because Henri went to court to stop it being pirated, and recounted how he had bought the song for two pounds from writer Frank Elton, after it had been refused by publishers. He won the case, and got ten pounds damages. 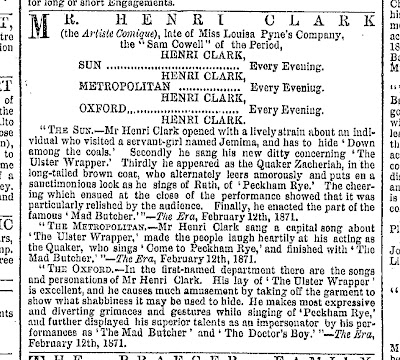 His next big success was with 'The Frenchman [of Leicester Square]' ('Tra la la, bon bon') (1872), a tale of Mons Alphonse de Granville who got into trouble with the lady who sang in Leicester Squre, which he would still be performing a decade on, as 'First she would and then she wouldn't', the popular 'The Moral Young Man' (who professes to be shocked by the ways of the 'wicked world'), 'The Margate Mermaid', 'Wait till you get it', the story of 'Ephraim Fox' -- a Yankee dandy with memories a chorus girl who wore 'a little bit of blue' --, 'Something in the City', 'The Heathen Chinee', 'I Won her Heart at Billiards' (1875, Chas Coote/G P Norman), 'It's My Turn Next' (E V Page/Vincent Davies), Rolling on the Grass' (1875), 'The Fellow that's Just Like Me' (1875), followed one upon the other, and he culled reviews such as 'without doubt one of the best artists of his class' 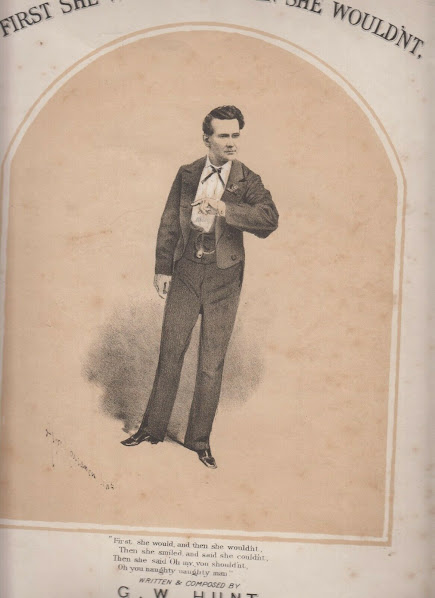 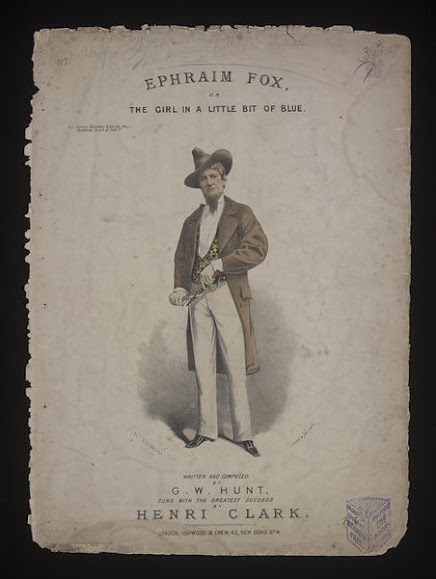 And, in the meanwhile, what of Mrs Clarke. Well, I'm not wholly sure, but I think she may have been performing as a serio-comic under another name. I must check out the lady named 'Kate Bella' who appears with Henri on a number of occasions. Anyway, in 1877 she came out as 'Mrs Henry Clarke' in a two-handed entertainment The World We Live In. 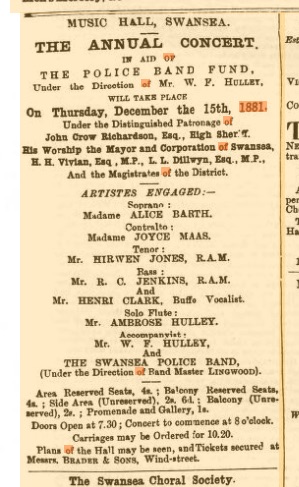 In the 1880s, Henri continued with more of the same. 'The Sandwich Man', 'Jemima Wants to Know', 'Let Go the Anchor Boys', 'LSD, LSD (that's the thing for you and me)', 'Just as you are for ninepence', Harry Hunter's 'Railway Porter Dan' (1884), 'The Fashionable MD', 'The Waiter', 'The Awistoquatic Actaw', 'The Fandango', his 'terribly real impersonation of' 'The Maniac', 'Goblins in the Churchyard', and a nameless song about 'the difficulties of courting a Spanish girl with a fierce father and a complete ignorance of English'. 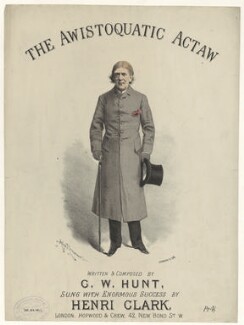 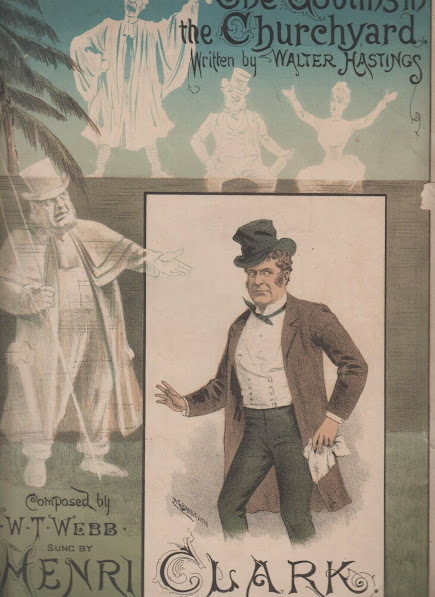 I see Henri's name on other sheets of music. Some like the popular 'Jessie the Belle at Bar' are numbers which were sung by other artist, before and after him; others borrowed, such as Herbert Campbell's 'The Pirate Bus' (John Crook/Fred Bowyer), and I know there are some I have missed. Michael Kilgarriff's listings give sixteen other titles, of which I can exhume no trace. On the other hand, my little dip of today has revealed almost as many that he doesn't include! Of course, the effective life of a song could sometimes be measured in weeks or days ... there are probably as many again that neither of us have found.

Henry didn't stop performing in the 1890s, but he eased off. He played a couple of pantomine roles -- Idle Jack in Dick Whittington and the title-role in Bluebeard; he spent periods as manager at the Metropolitan and at the Eastern Empire ('opposite Bow Street Station'), but he was still liable to pop up on a variety programme with such as Vesta Victoria, Tom Wootwell, Marie Lloyd and Kate Carney, or running a series of smoking concerts at Ladbroke Hall, taking a company of comedians to Southall ...

He died in Woolwich in December 1905, aged 65, 'after a short illness, and was buried as 'Henry Gardner'. I don't know what happened to his daughter(?s) ... I might even investigate Kate Bella, and get that Thanet death certificate ...

Well, that's my best effort. At least now there will be some fullish and accurate info on 'Henri Clark[e] on the www. Do let me know if you find more sheet music ... I may as well keep this as complete as is possible ...