Lazy day today. Bit worn out with sneezing and itching. Didn't spot any more actresses with murdered mothers on today's ebay: just a lot of really impossible listing  .. you know, Peter Paul Rubens under 'theatre' etc. So, winnowing through the pictures for sale (rule 1: ignore aything that claims 'rare', rule 2: ignore anything that has stamps or watermarks over the item, rule 3: ignore anything that doesn't present a clear, frontal picture of the item. Caveat emptor, otherwise ...), I picked a charming Australian photo, and thought I'd have a wee play with it ... 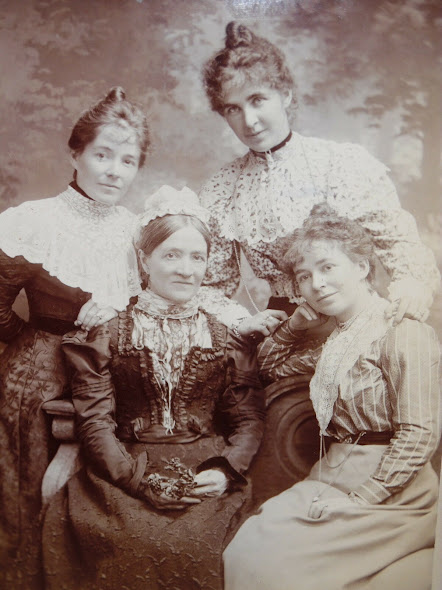 Taken in Fitzroy in 1900. But who are they? The back labels them as Annie E Jane, Carrie Isabel and what I finally deciphered as 'Rosey', plus 'mother'.

A bit of teckery and I should be able to sort them out. I mean 'Carrie Isabel'? Humph! do you know how many Carrie Isabels were around Melbourne at the turn of the century? And no censi to help ...

And to unhelp, daughter number one was born plain Ann Elizabeth with no 'Jane', daughter two was born plain Caroline, with no Isabel, and called herself 'Karie'. and 'Rosey' was born Emma Rosilla. But to me, used to dealing with fibbing theatricals, those little foibles weren't too huge a hurdle.

So, it just remains to tell you who they were.

Mamma was born as Caroline Robins in Cornwall, around 1835, the daughter of carpenter from Green Wotton, Kenwyn. She lost her mother soon after her birth. I see her, aged 16, and her father still in Cornwall in 1851. But sometime in the following years, father (aged 68) remarried, and Caroline left her aged parent's home, and headed for Australia. There, she married a fellow immigrant, Jens Jurgen Jacobson (b 7 December 1826, known in Australia as 'James Jacobson') from Larvik, Norway, some short time after his arrival in Australia. They settled in Williamstown, on the Esplanade, at a home curiously named 'Bleak House': James became a stout member of the local Presbyterian Church, and for over three decades was an employee of the Customs Department. Between 1861 and 1876, Caroline gave birth to seven children: these three daughters, and four sons, the last of whom died as a baby.

So, we have (back left) eldest daughter Annie, born at Bleak House in 1863. I see her working as a saleswoman in 1903. Annie remained single, moved to Footscray, and died there 3 December 1944.

And mamma: Mamma, widowed in 1908 (9 July), lived until 1921, and died at Sonoma, 1 Moore Street, Footscray 26 September 1921. The local paper saw fit to give her a wee paragraph, commenting on 'her very amiable and pleasant disposition'. 'The relict of James Jacobson familiarly known in maritime circles'.  'The family are all highly respected'. That's nice. But she looks nice. They all do. Thats why Ive spent the last couple of hours with them.

I wonder if George Frederick (b 1861), Ernest Albert (b 1865 who seems to have gone into timber in Western Australia) and Benjamin James Barnard (b 1871 'railway employee') had issue ... and how this picture found its way to ebay and to ... Denver, Pennsylvania?

Nicky Cunningham, family historian ... surely you would like it back!

Posted by GEROLSTEIN at 2:41 PM