I didn't really expect, ever, to come upon a photo of Ada Binning. I mean, she was a thoroughly professional Victorian performer -- first and foremost a dancer, but also a pantomime players and an actress -- but ... well, there were thousands of those! 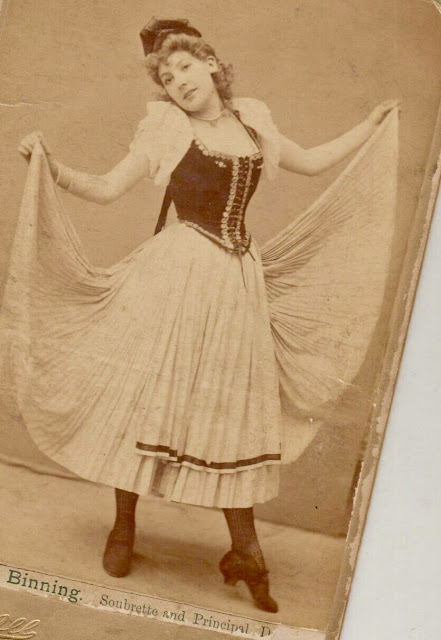 I recognised her name from the touring companies of the Gaiety burlesques, where she featured in the famous Pas de quatre, but particularly from her stint as principal danseuse in the vastly popular The Lady Slavey. Anyway, since she had seen fit to pay me a wee visit, I thought she should have a brief blog.

I quickly found out that, insofar as concerned her career, The Era had long ago done the job .. 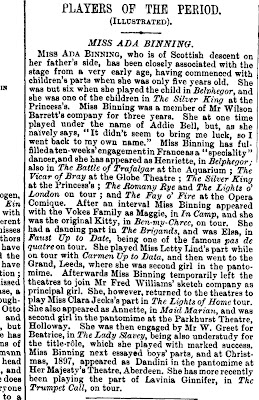 I guess that's all correct, although she isn't listed among the Vicar of Bray cast in my programme, and The Fay o'Fire didn't list its chorus. Anyway, I see Ada regularly on the British stage and music-hall platform between 1884, when she was, indeed, a member of the Wilson Barrett troupe, until 1903 ...

So, who was she? Scots descent? Er ... Ada Leonora Binning was born in Vincent Street, Westminster 9 December 1870. Her father, William Binning, was a horsekeeper, mother was Caroline née Holland (m 1862) and they can be seen in the 1871 census with the fruits of their conjugality: Kate, William Antony, Thomas, Henry and very tiny Ada ... the household also included Caroline's sister, Marie, her husband and two children, a spare cousin ... and there were more to come!
Ada's engagement with the Faust-up-to-date company won her both praise and a husband. Harry Richard Yardley was a character player (Old Faust, Lord Chancellor) in the piece, and in 1894 the two were married. They kept working through the births of Marie Ada (13 June 1895) and Harry Albert Lloyd (27 June 1900), but it seems that by the arrival of Edna Dorothy Gatcombe (6 March 1905, Mrs Donald Payne Storey) Ada had withdrawn from the stage. The couple shifted to the south coast where Harry later became the manager of the Southampton Hippodrome.
Harry died in 1924, and I see Ada, in the 1939 census, living alone in a flat at Hove's 19 First Avenue. Other than that she died in Hove in 1958, I have not found anything more. Except this little picture.
Posted by GEROLSTEIN at 1:20 PM

I’m thrilled to find this, as Ada is related to me on my mother’s side.
(I was a singer and dancer for 15 years)
Runs in the family 🎶