The other day, a really splendid photograph came up on ebay. It was said to be a Miss de Brena, but I knew better: it was quite simply the best photo I've seen of the actress and courtesan Marguerite Debreux whose colourful tale I told a while back (https://kurtofgerolstein.blogspot.com/2018/06/angel-or-devil-or-just-girls-having-fun.html).

Of course, I immediately went to the vendor's e-bay 'shop' to see if there were more pictures of the same kind there. And there were. But the names on all but one meant nothing to me. Miss Farringdon? Mlle Stolle? Miss Watkins? Miss [Etty?] Mortimer? Miss Strangeways? All pretty ladies. Actresses? Courtesans? Why are they in a bundle with Mlle Debreux. Are they cut from a book? None of them has the photographer's name, or identification other than a pencil-scribbled name on the verso.

The one name that I did recognise was Mlle Riel. I didn't know a lot about her, just that she had played ingenue roles at London's St James's Theatre with Raphaël Félix's French troupe in 1872. But here she was ... 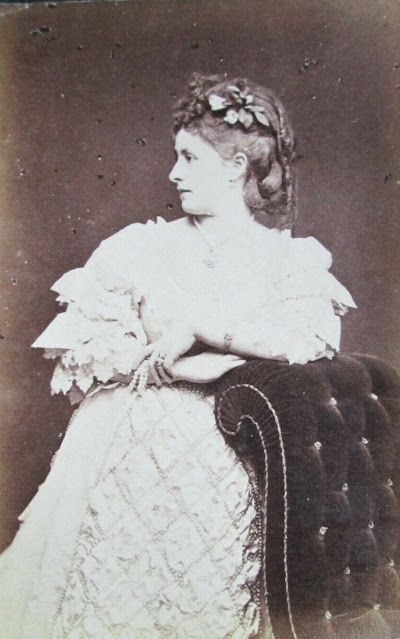 I know rather more about her now. Not her career, for it was seemingly cut very short, but about her life, and about the 'Murder in Park Lane' which catapulted her into the floodlights of actuality in 1872.

Caroline ka Julie Riel (b Paris 4 April 1847; d Boulevard Pereire, Paris 16 May 1921) was the daughter of Jules Richard Riel (b 1808) and his second wife, Marie Caroline née Besson. Mons Riel was a 'merchant' and 'commissionaire', and mamma had a modiste's salon in the rue Lafitte where, according to the gossip press, she sold chic hats at vast prices to customers ranging from Cora Pearl to the Empress of Austria. According to the same press, she sold up for 45,000 francs in 1866 to devote herself to preparing her daughter for the stage. Maybe. In any case, she was not without means. And the daughter was not without beauty or, it seems, a stack of stage-ability, to make what seemed like being a fine career.

Briefly engaged at the Gymnase, she then joined the company at the Théatre du Vaudeville, and in 1870 went to England with the Déjazet company which opened the Opera Comique with Les Prés Saint-Gervais (Friquette to the star's Prince &c). The Déjazet London season was to be a long one, lasting till March 1871, and it was followed by another, at the Lyceum (Marthe in Les Pattes de mouche) for Félix and yet another at the St James's, from November, and, at some stage, mother and daughter were 'loaned' a house in Park Lane by a friendly Lord. Maybe mother ('widow') had made him some hats. One paper characterised him as an 'admirer' of Julie.  Anyway, they were there already in the April 1871 census, so he was being very friendly. But when trouble came, Lord Lucan III (yes, that family already) was necessarily involved.

Trouble came in the form of one Marguerite Dixblanc, a French or Belgian cook who got herself hired for the house. Mlle Dixblanc had been somehow involved with the Communards in Paris, got herself in favour with the Catholic clergy, and by the influence of one such channel-hopped when things got difficult and a job in a Soho confiserie. She was there noted for drunkenness and petty thievery, so goodness knows why she was taken on in Park Lane. Not really the kind of person you would want cooking your dinner.

The French season was a repertoire one. Julie played la Baronne in Frou-Frou, the title-role in Christiane, Agathe in La Camaraderie, Laure in La Fiammina, and some nights she had 'off'. At the end of March, she had a whole week off, and decided to visit Paris, leaving mama alone at 13 Park Lane with their little dog and the three servants. What happened next was quite simply that the cook murdered Madame Riel. Over that fact there was never any dispute. The stories of how the deed came about depended on which side you were on. And which newspaper you wrote for. And whether you were a Communist or a Catholic or a Do-Gooder or not. Mlle Dixblanc's defence, when she came to trial, was that she had killed Mme Riel in a 'passion' because she had been horrid to her. Which really didn't explain why she had run off to Paris after the event taking with her bonds, papers and a very large amount of money from the safe, nor why she had dragged the body from the cellar, where the murder had taken place, with a rope round its neck and attempted to string it up in the pantry ... where Julie found it, behind locked doors, when she returned to London.

The police tracked the murderess down, in St Denis, in just a few days, and after the usual shilly-shallying over 'of what country was she a native', 'could she be arrested in France for a crime in England', was removed to London for trial. The newspapers of the world reported, sometimes quite imaginatively, on the latest developments in 'The Park Lane Murder'. Doubts were cast over the sex of the assailant. Julie was upped to being a member of the Comédie Française... the French papers waxed even more fancily than the British ... Lord Lucan admitted to having been the source of the money. He had 'cashed a bill' for Mme Riel. No one asked why she kept so much cash in her pantry.

Mlle Dixblanc was found guilty of murder and sentenced to be hung. But she wasn't. She was commuted to life imprisonment. There was an outcry over the 'Miscarriage of Justice' but the Queen had spoken. The murderess still, apparently, had friends in high places. Well, I just hope she didn't get into a passion while in prison. If she went there. If she stayed there. Where? She made it into Madame Tussaud's though 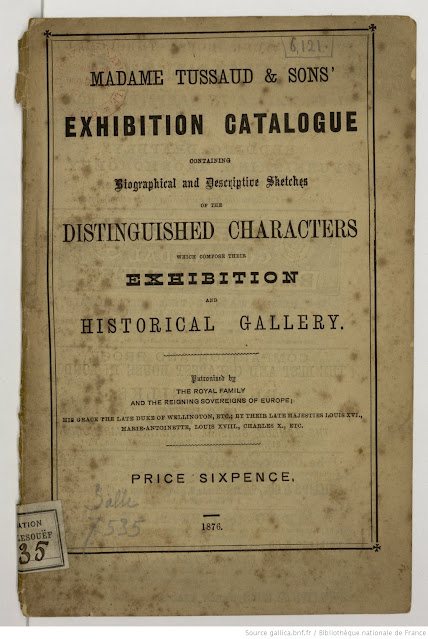 and, twenty years later, the Black Museum (which exhibited the knotted rope with which the deed was done) as the tale was told over at length (with the 'benefit' of hindsight) in The Illustrated Police News, illustrated with line drawings of murderess and victim. And the rope ... 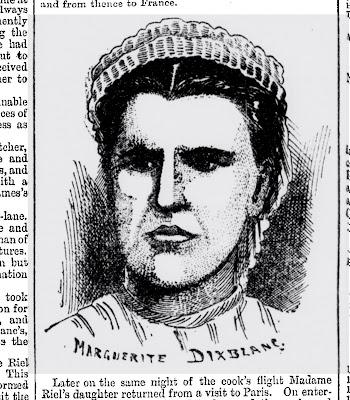 I don't find any signs of Julie back on the stage thereafter. But a decade down the line she married in the theatre. Her husband was François Victor Arthur Gilles (b Paris 12 January 1832; d Courbevoie, 16 July 1899), known for the theatre as Mons Saint-Germain, a very fine and popular comic actor, latterly of the Gymnase 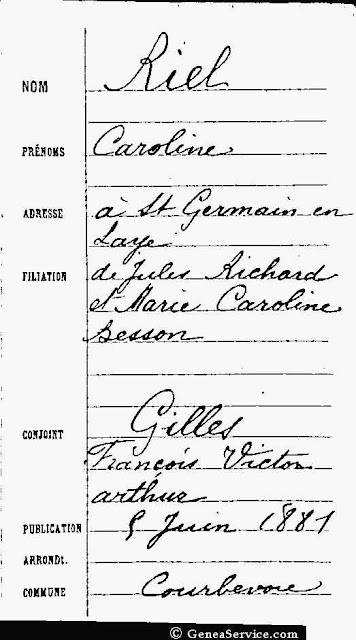 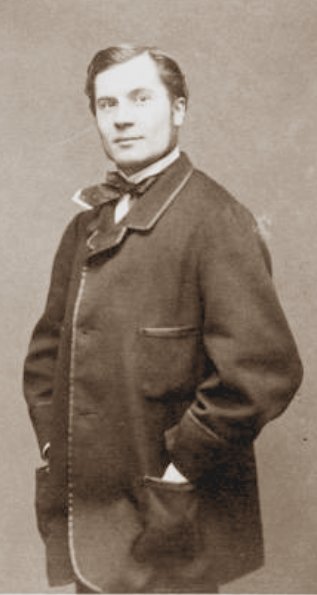 This is so interesting to me. I would love to know where you found sources for the information on Mme Riel selling up in Paris and for Julie Riel and Gilles de Saint-Germain having a son. I am searching Gallica but no luck so far.

Oh dear ... sorry I cant remember. In the press, and also familysearch I think ...