George the builder: a Leicester family

After several months spent, from breakfast to boozetime, in the world of the Savoy operas, I awoke today to a virgin (well, re-virgin) computer. Yes, the book is on the presses. It was a nice feeling, for about an hour. But then ... oh, just a wee peep at what's on e-bay. And this came up. 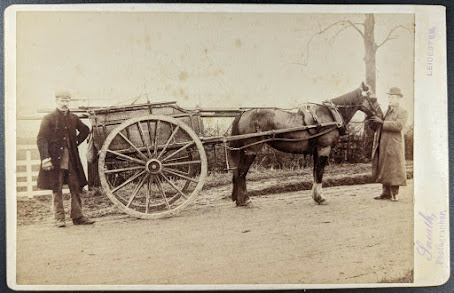 Why did I choose this particular picture? Because it was taken in Leicestershire, and Leicestershire is the Gänzl-Gallas family's home county in England. Brother John has long lived there. We're City supporters of 30 years standing. And John has done some marvellous poetry around the Leics countryside.
Lovely photo. I wonder what date. And ... hang on ... there is something written on that cart. Geo. Brown, builder. 'Builder' not carpenter, eh? Maybe I can find out a wee something about George. I imagine that is he, with his hand on his hip. Perhaps a son, in the bowler hat ..
Photographer: Sneath. Ah, that narrows the date. 1890s. Leicestershire photographer Robert James Sneath, aged 29, after trying to commit suicide by jumping in the river at Melton Mowbray, cut his throat with a hacksaw at Uppingham, in April 1899.
Well, thats when-ish. And would make Mr Brown 45 plus a wee bit. So maybe it is he in the cloth cap.
George Brown. Unfortunate name. Sigh. Wish me luck. Well, blow me up; here he is! 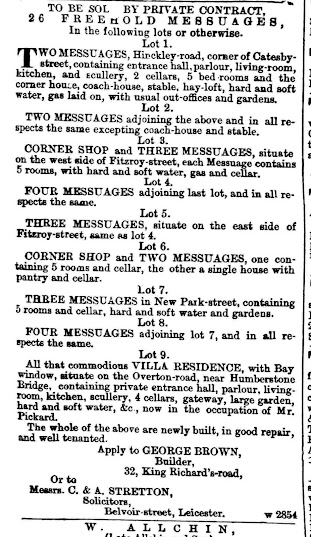 So. Not just a builder? A developer? Well, here's the corner of Catesby Street ... hmm... five bedrooms? Maybe the wrong corner ... 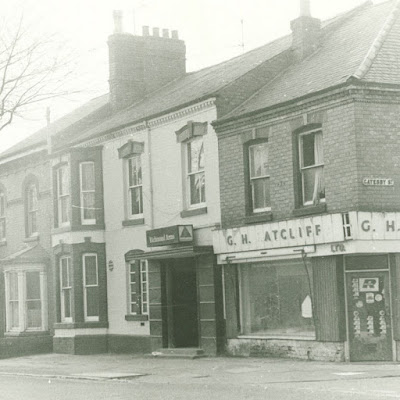 OK. That's, at least, the correct George pinned down. And I've found him in the seven censi of his lifetime too. He seems to have moved frequently. Maybe as fortune went up and down. Or maybe as his family grew ...
George was born in 1845. He describes the actual place in various terms but he was registered in St Margaret's, and brought up, it seems, in Goswell Street, where father John Brown and mother Millicent Brown ran a bakery which doubled as a beer house. In 1851 they are at 53 Goswell Street, Newark: dad, mum, George and his two baby sisters. And some pretty rough neighbours! 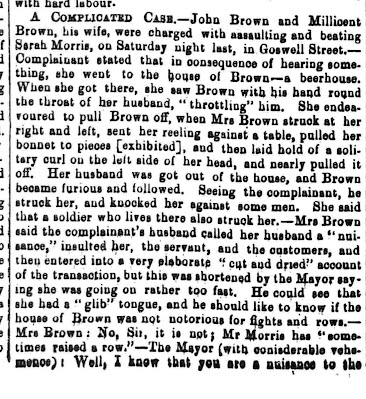 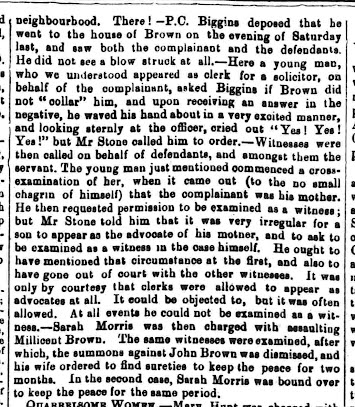 By 1861, John and Millicent have moved to 127 Upper Brunswick Street and an establishment known as the Sir John Barleycorn. George is described as an 'apprentice'.  In a few years, he would have his own home, a wife (where is that marriage registration), and the first of their eleven children. And, yes, the home is at the King Richard Road address mentioned in the above advertisement, George is a joiner and builder, his wife is Sarah Ann née White, and their firstborn are Elizabeth Millicent and Rebecca. One of Sarah's unmarried sisters is with them.
George obviously flourished in the 'seventies. By the time we catch up with the Browns in 1881, he is a 'builder employing 50 men', has the same wife, a different unmarried sister-in-law, and six surviving children. They are living at 4 West Leigh Road: Elizabeth, Rebecca, Walter George (b 27 May 1872), Joseph Rowland, James Arthur (b 17 October 1878), Mary Ellen ... and more ... Herbert, Thomas Headley (b 29 March 1885) and Amy Dorothy, wereto come before 1891. By which time feisty mama Millicent, widowed in 1881, has joined them.
I haven't followed all the children up. Elizabeth Millicent married a Mr Chapman, bred, and died aged 30. Walter (who apparently took over the building business) and Thomas, with their families, ultimately emigrated. Joseph became a draper and died 10 June 1947, James was a builder's labourer in Coalville. There must be a lot of Leicester Brown-the-builders out there! And in California. Hope they spot the photo.
By 1901, George was a 'retired builder' at Anstey, with four children still at home. Feisty Millicent had gone to her last lawcourt, and the sisters-in-law were long gone. In 1911, Mr and Mrs Brown can be seen at 352 Fern Rd. Only Dolly and Thomas with his wife and family are still there .. George and Sarah Ann, if they were ever actually married, were getting near to Golden Wedding time. I think they might not have quite made it. George died 9 October 1916. Seventyish ...
He lies in Leicester's Welford Road Cemetery, with Sarah Ann (d 1925) alongside him 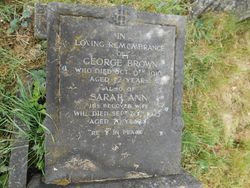 And, from a short distance, the Feisty Millicent watches over them 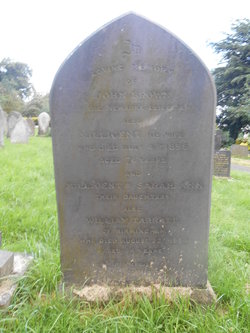 I like the Browns. I hope that is George, and maybe Walter, in the photo. And I shall get my brother to go check out their stones, just to make sure those multiple descendants are looking after the ancestors ...
Thank you, Brown family, I've enjoyed my day in Leicestershire.
Posted by GEROLSTEIN at 8:42 PM