Lucy Saxton: a woman of Canterbury. The latest story!

A couple of years ago, I had one of my periodic coups de coeur. I saw the picture of a lovely young lady from Christchurch, NZ, on e-bay and decided to investigate just who she had been. I didn't do too bad a job either. And I went so far as to visit her grave, and then to spend a few week's pension money on having it restored. Well, I told you: coup de coeur. We all do things on the spur of the moment. I, more than most folk! And I rounded off the story with a bloglet ..

The end of the story? Not at all. This week I received a wonderful note from a present day member of little Lucy's family! A descendant of one of the nephews and nieces ...

When you do history, it is all too easy to get 'facts' right, but the colour wrong. It is all too easy, also, to make mistakes if you are not very very careful. I try to be punctilious. I try very hard. But ... so, here is my original article (version two) with a few explanations, some colour, and some corrections

Lucy Saxton was not a notable. She was merely a woman who, like so many others, came from Britain, to the colonies, in the 1870s, and there made a life for herself, of a rather different kind than that to which she had been accustomed. She came, it seems, alone. But she came to join her elder brother, in the unlikely purlieus of Robinson’s Bay, Akaroa, where he had settled a decade earlier and established himself as a farmer, sawmiller, landowner and one of those worthies who seem to be on every local board and committee. In his case, from the Duvauchelles School Committee, as chairman of the local library and the Ratepayers’ Association, to the Akaroa and Wainui Road Board, as Licensing officer for Okain’s Bay and Akaroa, a Justice of the Peace, e tutti quanti. Lucy would become one of the schoolteachers in Duvauchelles (adjoining Robinson’s Bay), and otherwise seems to have occupied herself with charity works. She’d had practice.
Lucy, brother George Henry (b Darley 14 Sept 1836; d Karori, Wellington 18 September 1914), and sisters Ann Elizabeth (b Darley 29 December 1837; d 10 April 1869) and Mary (b Darley 19 May 1839; d Matlock 29 July 1876) were the children of the Reverend Solomon Cadman Saxton, formerly curate of Darley north and south, and then perpetual curate of St James’s, Hill, Sutton Coldfield (b Matlock 17 April 1796; d Hill Parsonage 28 August 1859). Yes, a minor provincial clergyman of the type so dear to Mrs Gaskell. Solomon, educated at Cambridge, doesn’t seem to have been of any noteable lineage. His brother, George, was the Matlock pub keeper, his four sisters, three, at least, eternal virgins, lived long lives as ‘fundholders’ until, latterly, obliged to take in the odd paying guest. Solomon, of course, being a clergyman, married (Elizabeth Cardwell) and bred, though rather less exaggeratedly than most Victorian clergymen: just four surviving children, before Elizabeth died (24 December 1874 aged 36), when Lucy was only months old.
The Matlock pub keeper? There are, my friend, pubs and pubs!
"The Hotel, known as the Saxton Hotel and also known as the New Bath Hotel, was at Matlock Bath - a busy spa town. At the (Saxton family reunion 2016) reunion we saw several silver spoons with his name engraved, that were from the hotel, and lace cuffs that the waiting staff wore as part of their costume working in the dining room. 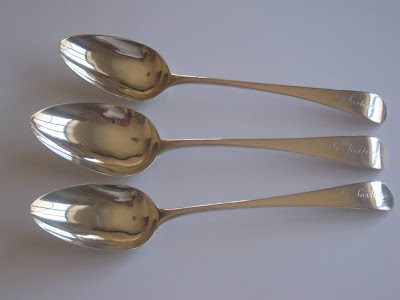 In 1841 it was considered by Granville's book 'The Spas of England' to be the best of the the biggest hotels for well-to-do visitors, its decorated ball room being a main attraction. George the grandfather died 1844, and a son George Withers Saxton, an uncle to Lucy and George, became head of the household.  When the hotel was sold about 1855 the Saxton family made their home at Woodland House "a commodious detached freehold residence with ten bedrooms''. in the adjoining grounds, where they still catered to holiday makers by providing lodgings." 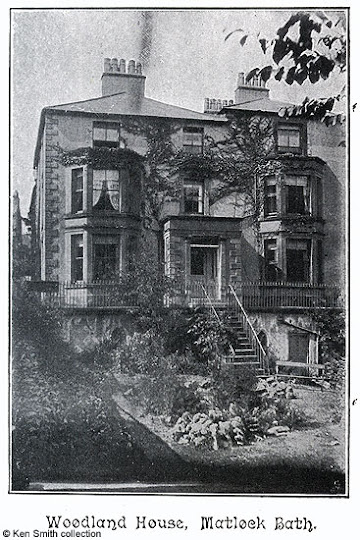 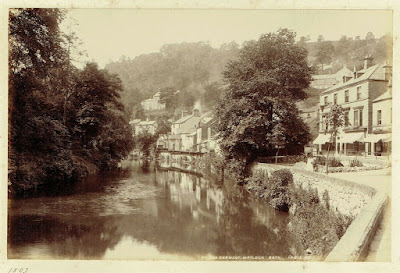 Solomon, as his position demanded, remarried. His bride (13 December 1848) was one Mary Knott (née Abbey), daughter of Richard of Northamptonshire, a widow lady (of another clergyman), rising 50. I suspect she fulfilled most of the duties of a curate’s wife, principally the housekeeping ones, without producing any more children. 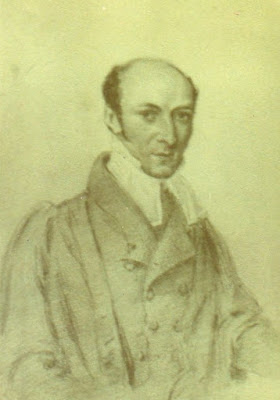 And then, in 1859, Solomon died. In 1861, Ann is working as a governess and Mary can be seen with her two younger stepdaughters, living in Leamington Priors. Or rather, not seen: ‘mother absent’ noted the census. Mary did at Long Buckley, Northants in 1882.

Four ‘orphans’. George moved first. From his education at Christ’s Hospital, and whatever he had done since, he emigrated. When? I first see him in Akaroa in 1865. Nearly 30 years of age. And a sheep farmer! Do they teach drenching and dagging at Christ’s Hospital?
Clarification. George had to leave at age 15 as he was a charity case at that Blue Coat School. Between 1851 and 57 he worked for the Midland Railway, Derbyshire, which placed him very close to the Hotel family in Matlock Bath. 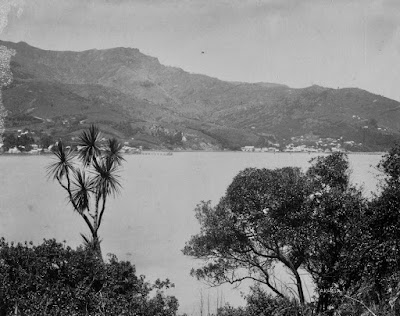 Ann moved next. She got married. The gentleman was an Irishman by name Henry Crawford, and of him I know nothing. But the family does "He died in 1883 but Ann did not die until 1917, in Dublin.  She had four children, the last born 1880".

I imagine that, some time around now, as the last Saxton standing in Matlock, Lucy decided to join brother George. As maiden sisters did. I hope, after the parsonage at Hill, she was prepared for Akaroa. ‘Miss Saxton and the Misses Williams have thirty pupils at Robinson’s Bay’ wrote the local paper in 1881 …
I see, in 1896, Miss Saxton still in Robinson’s Bay ..
Well, in 1902, George got into the usual farmer troubles, a host of dead and stolen sheep, and he ended up filing for bankruptcy. His main debt was to … his sister, who had obviously been filling his monetary gaps for some years. I wonder where her money came from. ("We presume the funds that Lucy had lent him came from her share of the sale of the lodging house in Matlock Bath") Anyway, he may have been looking after her, but she had also been looking after him. So, now, after nearly four decades, the Saxtons left Akaroa …

In 1911, Lucy is recorded as living at Geraldine ‘Waihi Terrace, spinster’ ("with her nephew George Cadman Saxton"), by 1914 she is back in the city, at 299 Tuam Street, where she stayed for a number of years, seemingly sometime in the company of Miss ?Mary Kiver, who took ‘decorative classes’ for the Horticultural Society … I see the two of them donating regularly a pound or a guinea to various war and patriotic charities (Sailor’s Day, Navy War Fund Appeal, British and Foreign Sailors Society, Soldier’s Christmas Fund, Prisoners of War Appeal, Jubilee Memorial and Queen’s Statue Fund ..). ("she was actually living with the Kiver family - a widowed mother and three daughters")
So, I don’t imagine Lucy was entirely alone. Or was she? George, who died in 1914 (18 September, The Terrace, Karori) had had a number of a not very durable wives ("the first two died of post partum infection"), and a number of children therefrom, but oddly, when she herself died, in 1926, Lucy named as her executor Mr Harry Anderson, engineer, Christchurch agent for the firm of Reid & Gray, of Dunedin, manufacturers of farm implements …

Lucy’s ashes lie in the graveyard of St Paul’s Church, Papanui. In the same road as her last home.
t’s a long way from St James’s, Hill, Sutton Coldfield. But papa’s 1835 church, described in its time as a brick building of no particular architectural interest,  has been rebuilt a couple of times since her day. And this one looks more appealing, anyway … oh! It’s Grade 2 listed …! And nestled in the shadows of a mega-Mitre and the Northlands Shopping centre .. well, I shall visit her when I get back to town. Your tombstone, as seen on the billiongraves website, looks as if it could do with a bit of tlc …

The family has a lovely memento of Lucy ... "My mother has a hip flask that was Lucy's, crystal cut glass with a fitted silver cup and silver stopper.  It appears to have been given to Lucy as a 'welcome to NZ gift' potentially by Samuel Farr, a friend of brother George and recognised as an architect in early Christchurch.  The cup has her initials LHS on one side and SF on the other. He was married so there is no suggestion there was any romantic attachment, and there is no record of any other suitors either". 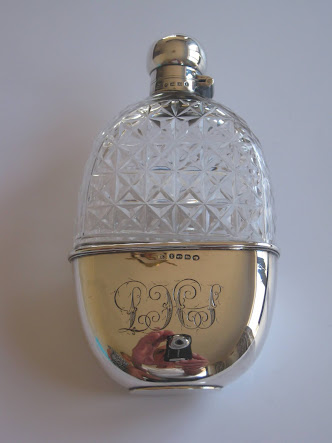 So, there we are. Lucy has another dimension. Thank you Rosalyn and Ross for all the red bits of text, I am very glad indeed that I picked on Lucy for my gut-reaction researches, and delighted that my pension was so very well-spent! 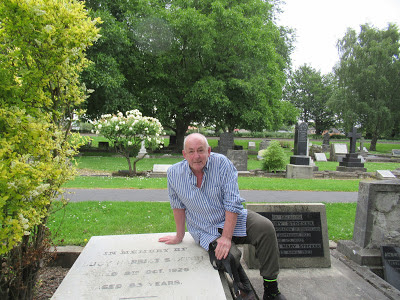 Posted by GEROLSTEIN at 2:19 PM