The real Connie Ediss, or "She was a Milliner's Daughter"

Here I was, quietly investigating my latest ebay picture on a cool spring morning, when I got a cry for help from a Real G&S Expert, Mr George J Low, in locked-down Munich. When George calls, it's (historically) serious, so I put aside my wanderings in Truro, and snapped to attention.

"Connie Ediss (11 August 1871-18 April 1934) ... was born in Brighton, the eldest child of Charles Coates, a house-painter, and his wife, Jane. Her real name was Ada Harriet Coates. Her mother and aunt had both been members of the D'Oyly Carte Opera Company"

At least three errors already! To start with, the compiler of this piece has her date of birth wrong. She was born 11 August 1870.  Gulp! Does that mean *I* have it wrong? Quick glance. No. The wiki-person doesn't reference The Encyclopaedia of the Musical Theatre: only Who's Who in the Theatre ('I have known some strange errors in THAT publication!), Stanley Green (who will have followed it) and, those most fallible of sources, newspaper reviews. For goodness' sake, the Encyclopaedia has been out for twenty years. I don't say it's perfect, it's not, but I actually bought thousands of birth, death and marriage certificates (now with Andrea Cawelti in Harvard) to make sure such details were correct! Did this wiki-person? Of course not. How do I know? Because if she or he had, he would have not said she was born Coates, the daughter of Charles. She wasn't.

Well, I shall stop getting angry over this careless and lazy 'history-making' and instead put the truth on record. 'Connie' was born Ada Harriet Whitley, the child of milliner, Mrs Jane Whitley née McClean, daughter of Irish cork-cutter, Mr Francis McClean. Whether she was also the child of Mr John Whitley, the Brighton ?tailor, is another story. Whitley and Jane married 13 July 1863 and Jane had already borne him three daughters, before she, seemingly, walked out to shack up with young Mr Coates, taking with her just her youngest child: Ada Harriet. Rhoda and Ellen stayed with father. 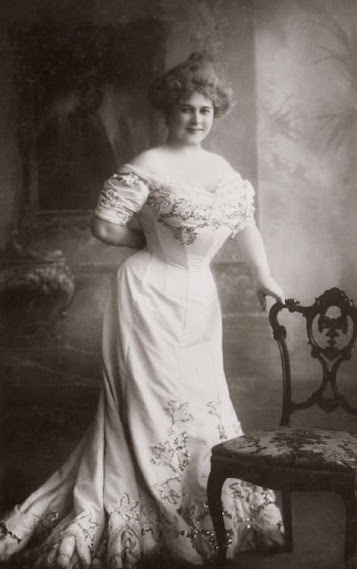 So, Ada became 'Ada Coates'. She wasn't of course. It was merely a case of 'known as'. For John and Jane were never divorced, and Jane never married Charles Coates. Just bred from him. And Ada is referred to as his 'stepdaughter' in the 1891 census.

So date wrong, real name wrong, parentage probably wrong, she was the third daughter of Whitley not the first of Coates ... all that is correct is that mamma was named Jane and that 'Connie' was born in Brighton. Talk about fake 'history'!

The comment, however, that had caught George's eye was the one about mamma and auntie having been members of the D'Oyly Carte company. Wiki says 'had been'? Er ... there was no 'D'Oyly Carte company' before 'Connie' was born. It was nearly another decade before Mr Carte formed his famous company. By which time Jane was in her mid-30s, and the mother of a houseful of small Coateses ...
Enough. I should say that I have not purchased Connie's real birth certificate. Maybe that's a bit of homework for Ms/Mr Wiki to do ... I am kind o' busy in Truro. But, please, if Wikipedia is to have any value at all as a reference source, the contributors need to GO THE CORRECT AND PREFERABLY PRIMARY SOURCES.
So, George, in answer to your question, it is extremely unlikely that Jane McClean-Whitley ka Coates and her sister, by any other name, became mature members of a Cartesian chorus ...
Posted by GEROLSTEIN at 6:44 PM

Hi, Kurt. If you wanted to ensure that Wikipedia editors used your Encyclopedia, you could digitize it and post it online. Alternately, you could send copies to persons who regularly edit articles you are interested in. Wikipedia editors are not paid and are not obligated to prefer your Encyclopedia over Who's Who and other sources. They are discouraged from using primary sources, especially hard-to-access ones like birth certificates. They have to make a judgment among the sources that are readily accessible. However, errors are easily corrected, and as you can see, the Ediss article has already been corrected on Wikipedia. Errors in books are not easily corrected.