Angel or Devil. Or just girls having fun?


.
In my meanderings through C19th Paris, yesterday, I came up with this photograph. 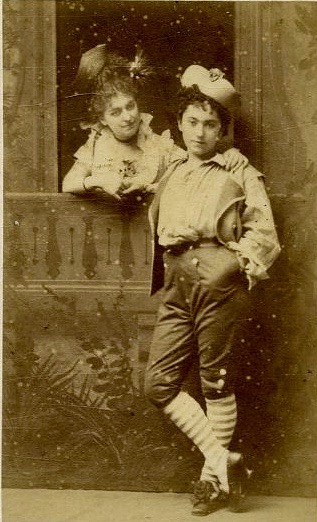 Two pretty young ladies, in some unnamed Parisian opérette of the early 1870s. Which one? I wondered. A 'girl’ and a ‘boy’, and labelled Scalini and Debreux. The boy is Debreux: she made a speciality of, among other things, sporting travesty. I encountered her in my Emily Soldene book, along with Emily’s tart description of her … not nearly as tart, I realise now, as it could have been! Scalini I didn’t know much about … but I do now.
Debreux has come down from C19th theatrical history with a pretty tarnished personal reputation. She was well-known as a ‘courtesan’, with a particular attraction for the English, who are said to have affectioned, especially, her boy-girl look. Haha! The good old ‘vice anglaise’. She played several good roles in good theatres through the 70s and into the eighties, but has – in the end -- been remembered largely for her extra-curricular activities. Devil?
Scalisi’s reputation, on the other hand, has survived impeccably. After a decade of pretty-girl-pretty-voice roles, tending latterly to the stronger, she dropped out of performing and became treasurer to, then long-time principal of, the Paris Actors’ Orphanage. Angel?

I don’t think it is quite as black-and-white as that.

‘Marguerite Debreux’ was born 5 June 1851 in St Josse-ten-Noode, Brussels, as Louise Hortense Françoise Terdie. She, apparently, was first seen on the Paris stage in 1869 when she appeared in a little part (as Cupid) in the féerie La Poudre de Perlimpinpin. 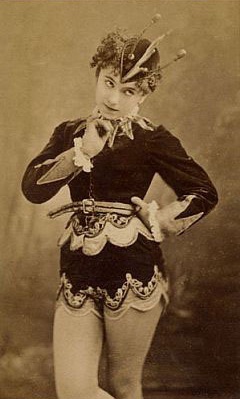 She caught several interested eyes, and both her careers were on their way. 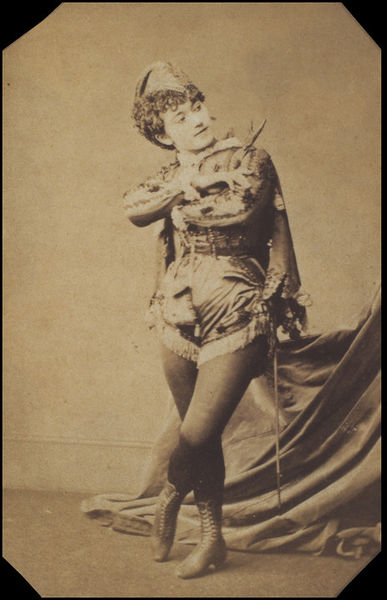 By April 1870 she was in London (oh! Those English!) wowing the West End with her Méphisto in Le Petit Faust. Soldene was Marguérite. Mlle Debreux capitalized on her (on- and off-stage) success to go on to play The Idle Prentice and Ivanhoe at Liverpool and Nottingham, in The Mistletoe Bough at the Adelphi, Fragoletto in Les Brigands at the Globe, et al, before returning to France and the biggest success of her career, as the boy, Fichtel, in that most sex-riddled opérette of all, Le Timbale d’argent (9 April 1872) at the Bouffes-Parisiens. Le Testament de M Crac, Les Bavards, Le Serpent à Plumes, La Rosière d'ici 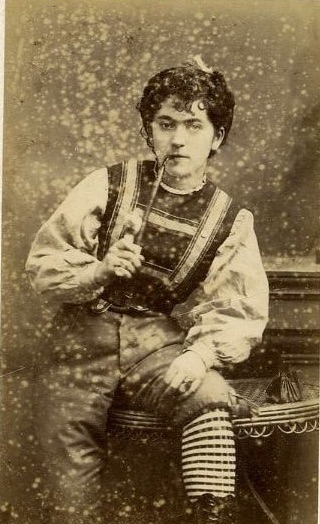 However, Mlle Debreux began living it up a little too obviously, and even a little dangerously, and her convoluted (sex) life would all come out in the Parisian courts. She had got ‘involved’ with a high-living gentleman (of sorts) by the name of Jean Marie Camille Gabriel Hugelmann. Mons Hugelmann had a wife and thirteen children, but he also kept two mistresses (one quails to wonder why he needed two at once) and Marguerite was one. She had a house, furniture, jewels, paintings … and, in the best courtesanic fashion, glittered and was gay. 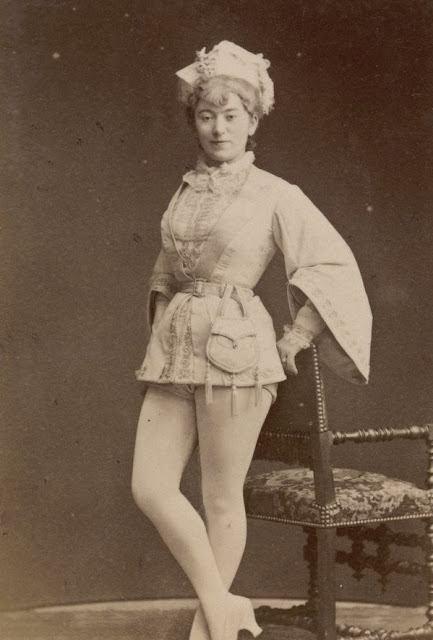 But how was Mons Hugelmann financing all this? In ‘the Affaire of the rue Suresnes’ it all started to come out. Gabriel was meddling in things he had no right to, and, it was suggested, Marguerite was too. But they were a wee bit late: Mlle Debreux had met another man, and Gabriel had been given the heave-ho. So he was a wee bit nasty to and about her in court. The press ungallantly gobbled it all up. 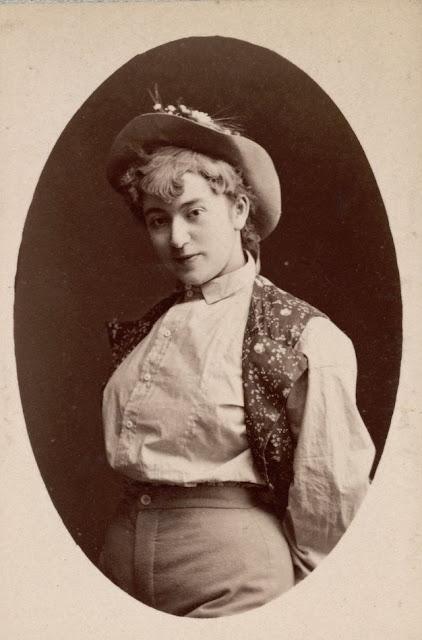 Her new love was stock-jobber [Gabriel] Camille Bloch, well-known in the world of Parisian nightlife, and they would stay together for 25 years, and two (illegitimate) children, until a very public break-up – caused, so the court was told -- by some pornographic letters (by whom? To whom?) -- in 1899. 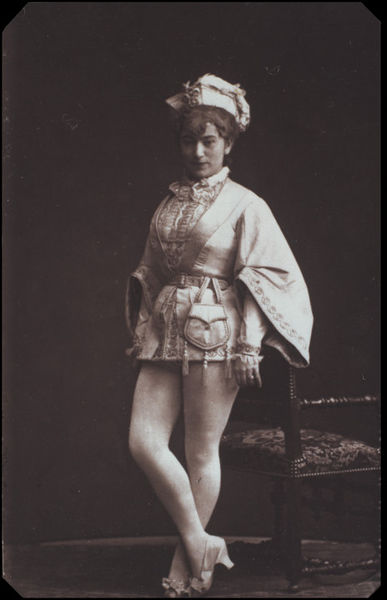 In the meanwhile, Marguerite continued with her career on the stage, at the Bouffes-Parisiens, the Taitbout, the Palais Royal, the Châtelet, the Athénée (La Cruche Cassée) and at the Nouveautés, where she introduced Sanchette in Le Jour et la nuit and appeared as Zoe-Chien-Chien in the Zolaesque burlesque Oh! Nana … before in the 1880s retiring from the stage. One presumes she had already retired from ‘entertaining English gentlemen’, although I did read one piece somewhere which suggested that Bloch pimped for her.
After her separation from Bloch, she lived on for a while in Asnières, before, in 1906, selling up everything: the proceeds of both careers (the catalogue makes jolly reading), and returning to Belgium. She died there 23 June 1917. 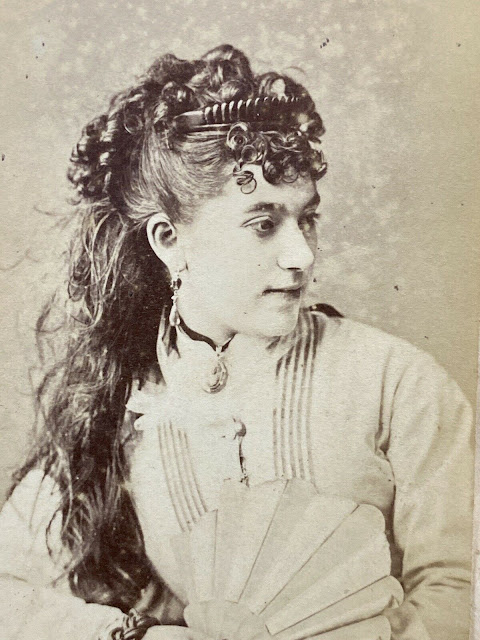 ‘Marie Scalini’ was born in Paris 21 October 1852, as Marie-Louise Chack, the daughter, so a fine history of Le Vésinet tells us, of Jules François Chack, a perfumer of the rue Fauboug Poissonière and his wife Françoise Clémentine née Boyer. The early part of her life appears to been the irregular part, for, when she made her stage debut, at the Bouffe-Parisiens in 1873, as Mina de Goor in La Petite reine, paragraphed as being 18 years-old, 22 year-old Marie – stage name in place – said she had been performing in St Petersburgh. Or Brussels. Or both. She had performed to such an extent as to have in tow a little Madeleine Chack (1873-1934). 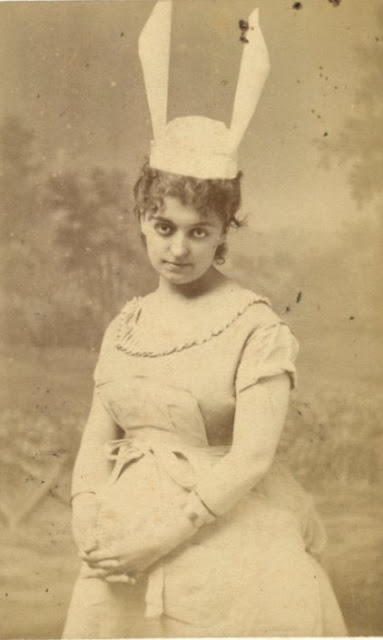 Apparently the little girl’s father was a member of the Irish Fingall of Killeen family, who are said to have had the regular objections to an actress in the family, so the young man set Marie up in and establishment in Le Vésinet (the Villa Irlandaise, 3 av Kléber) and they went right ahead and had another child. I don’t know what became of Mr Fingall Jones, but Marie lived, comfortably, and died at 80, in that house. I hope she got more than the 12,000fr a month allowance that Marguerite got from her stockjobber. I mean, if he were related to a peer … 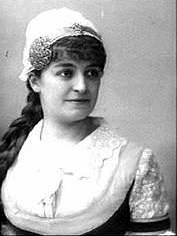 Marie had her trip to the lawcourts, too, in 1881, but hers was professional rather than personal. She got into a contract battle with the Bouffes director, Cantin, who was ‘misreading’ her contract, purposely I am sure, and though she seemed in the right, he – as managers almost inevitably did – won. 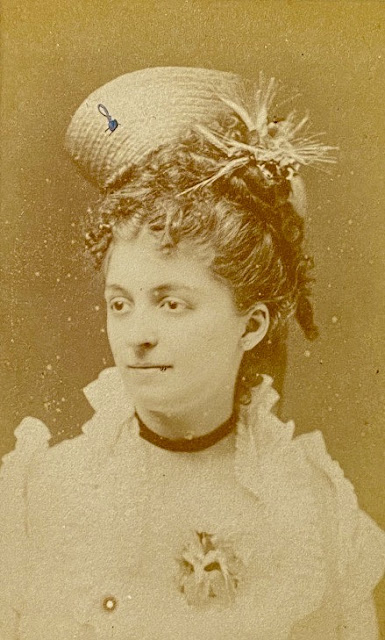 But, during the nearly a decade that she featured on the Parisian stage, to general approval (‘la ravissante Mme Scalini, qui chante aussi bien qu'elle est belle, ce qui n'est pas peu dire’) she appeared alongside Judic and Peschard and others such in a row of opérettes at the Bouffes, at the Menus-Plaisirs, the Folies-Dramatiques, at Brussels and even at the Châtelet and the Théatre Lyrique, at one stage, when her voice (pupil of Arnoldi) seemed to be expanding.
When she appeared as Nelly, however, in Planquette’s Rip van Winkle in 1882, it was evident that something had gone awry, and Marie promptly gave up the stage in favour of teaching and, in particular, her work with the orphanage. Latterly, Madeleine seconded her. And the son? [Louis] Paul [André] Chack (1876-1945) is a book in himself. I’m not even going to attempt him. Devil and Angel. A naval hero in the Great War, Légion d’honneur, prize-winning writer, he was judicially murdered by the French, after the second war, for anti-communist ‘treason’. His grand-daughter has told the tale in novel form as La Villa Irlandaise (1985).

Well, I still haven’t decided who was what in all this. I mean, morals schmorals. But …

Neither have I worked out what show it was that had both Marguerite and Marie en travesti in the cast – and I’ve given my Noel and Stoulligs away. Maybe a revival of La Timbale d’argent … 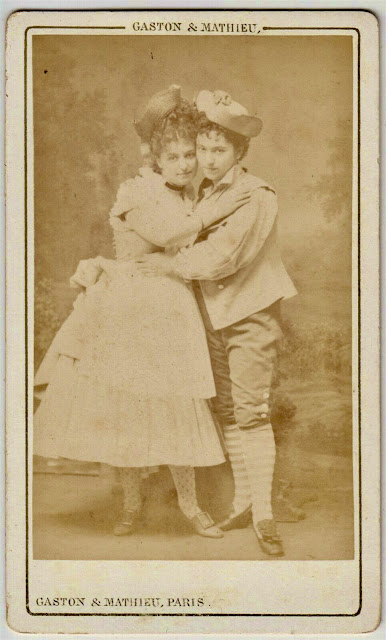