The Isle of Wight: Over and Out

.
My days in Wight have been wittering away, one by one … and very soon my stay here will be done. Tomorrow, I’ll be on my way back to Berlin.
To be truthful, I haven’t paced myself very well during my stay here. Equipped with that pseudo-youthful vigour that I seem somehow to have discovered in myself this year, I hurled myself into action from my first days on the island – dining, wining, gallivanting, socialising and exploring – and once I began writing my daily pieces for the VentnorBlog, the tempo only increased. And, after six Wightish weeks, gentle signs of Kurt Implosion started to show. Time to slow down!
But ‘slow’ doesn’t mean ‘stop’! So I do have a few more restaurants, a few more dinners and lunches, a few more outings to add to my score for July, from Quarr to Totland – one end of the island to the other.
The visit to Totland was a lunch out with Richard, a new VB pal. I said ‘pick a place’ and he opted for the High Down Inn, way out beyond Dimbola, in a part of the island I had never penetrated. Excellent! The Inn – which has a somewhat colourful and drug-stained past history -- turned out to be a very jolly place indeed. Properly pubby, not too big, light and comfy, carpark not coachpark, ale from the barrel. Nice. We had an agreeable ‘pub lunch’ – having seen the world-record doorstep sandwiches, I had a neat smoked mackerel with my shandy – and a good time was had by all. I’d pop in there for a quick one any time. 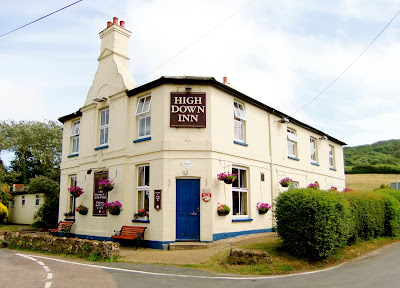 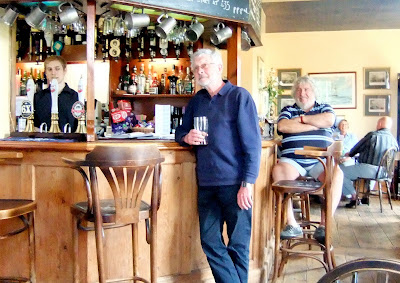 I have been told for a long time that I, who love Quarr Abbey so, ought to go there to hear the monks sing vespers. So when my friend Gilly said she would like to go too, it seemed the good moment. Red Fred was called into action and off we trekked. Quarr was looking its loveliest in the semi-dusk..
What did I expect to hear? As a heathen, I suppose I didn’t know what Benedictine monks do for vespers. But somehow I expected singing. Alas, I didn’t get it. If this is what is called ‘plainsong’, then rightly so. It is very plain indeed. Most of the time on one note. Unfortunately, not all of the seven and a half mostly elderly monks performing seemed to agree on quite what that note was. Nor on the timing. Nor when to come in together. And, well, I have an MA (Hons) in Latin, and I had the text in front of me … I could barely distinguish a word. It sounded like an unenthusiastic washing list. An out-of-tune-and-time washing list.
Benedictine vespers are not for me. But Quarr Abbey is. Once again it moved me hugely. And, as the sun sank behind the spire, I snapped it one last time before leaving … 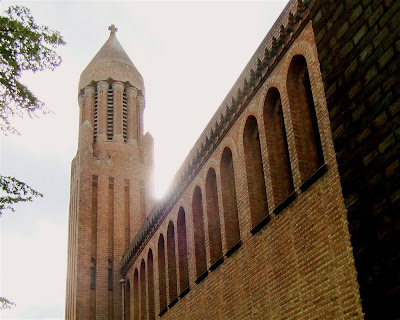 Quarr day was a big day, for on our return I dined on luscious, plump local plaice with Gilly and Chris at Jasmine Cottage. And before our jaunt, I had lunched with Simon and Sal, the owners of VentnorBlog at their palazzo in Medina Road. I didn’t take a photo, so here’s one taken a few days earlier, when I introduced them to what every Wightman and WIghtwoman should know: the Royal Hotel’s famous Gallybagger soufflé! 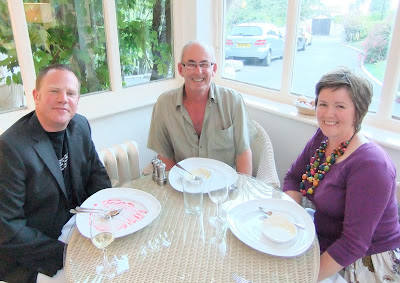 I have a wonderful souvenir of my visit to Medina Road, and of my stint as ‘boy reporter’ on the VentnorBlog. Simon and Sal manufactured me two delicious commemorative tiles to take back to Gerolstein. Oddly enough, they are just the right size to take a wine glass.. 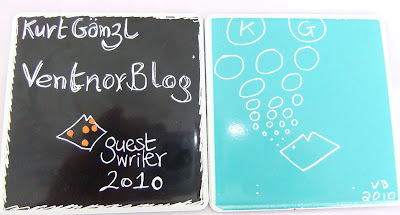 The round of goodbyes continued, but my ‘last lunch’ had to be saved for the Bay Grill. I’d intended to visit Ryan Burr’s resto regularly after my first fab feed there, but geography and my ‘indisposition’ meant I’d never even got back once. So, yesterday, off I set. I arrived well and truly early, so as to have time for a nice long chat with Ryan and his team before things got too busy, the ‘star’ cooked me my favourite chicken dish with his own fair hands .. and yes! it was just as good second time around! ... and he even let me try his Raybans. Well, every star needs them these days, yes? He does the sulphurous look that goes with them much better than I.. 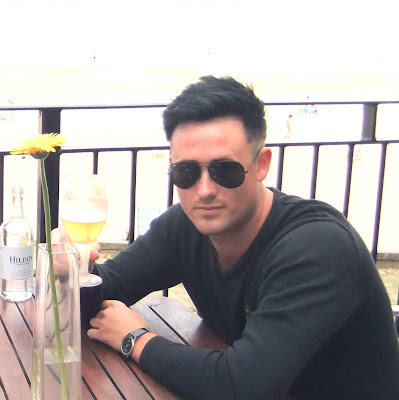 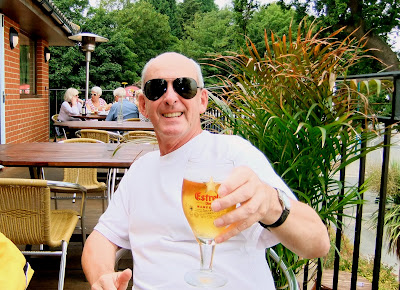 My last evening was saved for my friend Debby. She’s had an ‘indisposition’ of her own, as well as being occupied running three businesses and the town of Ventnor, so we’ve missed each other quite a lot. So where did we go? To the Hermitage. The Hermitage is 500 metres from my ‘home’. It’s the original early-19th century mansion that throned over all the lands round here, and its now an hotel. Very recently, Debby’s friends Ian and Jo have taken over the day-to-day running of the place so .. why not? 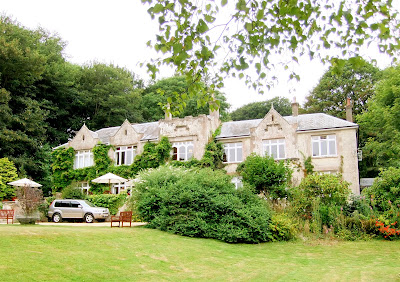 I could write a whole article on this place. The building is lovely, the grounds are lovely, the lounge was comfy and the dining room delightful. With very little expense and effort (and some is sorely needed) this could be an absolute top-class luxury small hotel (10 rooms). At the moment, it falls somewhere in a stylistic and characterful no-man’s land. Everything is very pleasant (especially my definitely home-made soup!), but all I could see .. all I could think .. was what it could be. Heck, give me (and Mr Burr?) a free hand here for a bit and .. wow! the possibilities are huge.
An impossible rumour says the owner thinks to install a helipad. He’d be mad. He hasn’t got (yet) a place that helicopter-style people would find even nearly up to the mark. Spend the helipad money on getting The Hermitage right, sir … and then … then invite me down from my luxurious suite next-door. 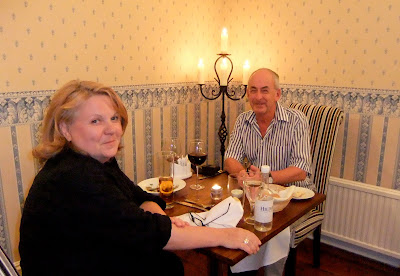 So, come the morrow, I’m off. Down to Shanklin to return Red Fred. The little train to Ryde, and the FastCat to Portsmouth, where an Airport Transfer minicab (55 quid) awaits to take me to Heathrow. At 5pm, I fly by British Midland (I wonder if they can get everything right this time) to Tegel, Berlin .. sigh .. by the time I roll in to Kevin’s flat, it will be some 14 hours from Hermitage Court Farm …
Such is the traveller’s life.
Posted by GEROLSTEIN at 10:27 AM