Yes, I’m back! I back, and installed once again in my delicious little apartment at the no32 Nollendorfstrasse which, the way things are going, is going to end up as eventful and famous as the ‘Sally Bowles house’ just down the same street, which was the one-time Berlin home of Christopher Isherwood.
Getting to Berlin was a bit of a trial, mainly because, not having done said trip before I left enormous time buffers between the various stages (car-train-ferry-minicab-plane-taxi). So I spent 1 ½ hours awaiting my minicab on the pavement outside Portsmouth Station (where Sean of A1-Sunset Cabs, came valiantly to my rescue) … 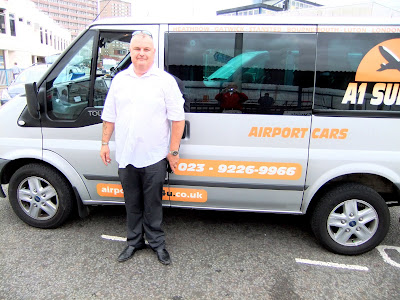 I spent five hours at Heathrow, where everything has changed since I was last there, but which was surprisingly less ghastly (going out!) than I feared. Mind you, four of those hours were passed in the pub, getting rid of my English small change. Tegel airport was, as ever, an efficient delight – I shall go into mourning if they close it down! – as was the poor taxidriver who buzzed me to Kevin’s house and gave me – twice! – too much change.
A reunion with most of the Clarke family, a night on Kevin’s couch, and the next afternoon, southwards to the Nollendorfplatz, to meet my ‘landlord’, Andrew, and gather up the keys to my Berlin home. And the sun shone, and it was as lovely as ever and .. well here I am! (No photo until I can shop for flowers!) And into action!