Up until very recently, the word ‘Gallybagger’ wasn’t part of my vocabulary. Asked to guess, I would have plumped for something like an 18th-century smuggler or perhaps a secret trouser-snatcher. But now I know. Gallybagger is ancient Wightish for ‘scarecrow’. And modern Wightish for ‘cheese’. 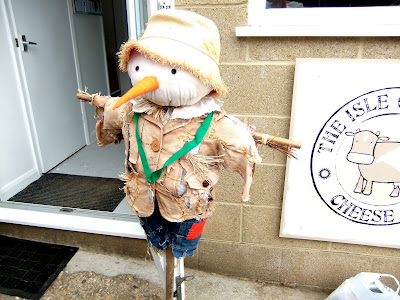 Cheese is a very personal thing. We all have our favourites, and there are endless varieties to choose from. In recent years, my big favourite has been the soft, French, unpasteurised Époisse[s], but I’m always open to new ideas.
I encountered ‘Gallybagger’ for the first time in the delicious cheese soufflé at Ventnor’s Royal Hotel, so when I afterwards saw it under glass at the deli at Chale Green Stores, I had to buy it. And try it. And I went promptly back and bought the whole piece. I introduced Brother John to it, during his Island stay, and the next day, we went back once more, and split between us all that the Store had to offer. His part headed for Leicestershire, mine .. is no more.
So I thought that, while I am here, I really should go and see where this rather remarkable cheese came from.
I know I don’t have to tell anyone on the Island about the ‘Isle of Wight Cheese Company’, and about its lightning rise to international success with, initially, their Isle of Wight blue cheese and now with others, including my pet ‘scarecrow’. The whole story is told at www.isleofwightcheese.co.uk/, one of the young company’s 19,300 hits on Google, it has been on television and can be seen on video ... 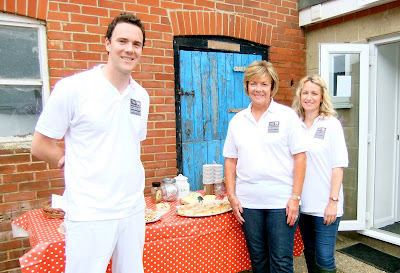 I visited Queen Bower Dairy, where the milk is born and the cheese manufactured, this morning. It is decidedly not easy to find (Red Fred did a mile down a track which turned out to be a one-way ‘road’ .. the other way!), but that is probably as well, or Richard and Julie Hodgson would end up spending half their day entertaining fromage fans, instead of spending their entire day creating cheese.
Today, however, was an occasion. The Solihull firm of Jongia Ltd, suppliers of cheese-making equipment to the nation, had brought twenty-seven fromagists – from the seriously celebrated to the debutant -- from England, Ireland, Scotland and even South Africa, on a visit, and I tacked on to the tail of their tour.
Amidst talk of everything from Stilton to Stinking Bishop, and of the vagaries of the price of decent milk, I put just a toe into the arcane world of Cheese. I mean, would you know what this machine is? 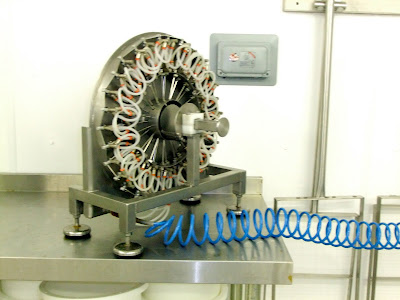 It’s not an instrument of mediaeval torture, it’s a compressed-air gadget for piercing cheese which is going to be blue.. I told you this was arcane!
In spite of Mr Jongia’s kind invitation to go on with the brother-and-sisterhood to the Dark Horse, Brading, I turned Red Fred towards Ryde, where lunch awaited me (see tomorrow’s musings), leaving the wonderful world of Gallybagger to the experts.
I will not, however, be leaving the cheese to them. I intend to make the most of it whilst I am here, for I am quite aware that it is a very special rarity: the little ‘factory’ at Queen Bower simply cannot produce enough cheeses to supply all the places where I spend my time.
You lucky people.
Posted by GEROLSTEIN at 11:04 AM