Kenny Ball and Me.

I’ve talked on the air, and written here, there and everywhere, about what seems to be considered (although I don’t quite see it that way) My Fabulous Life, rather a lot over the past twenty years or so. In English and once, marvellously, at great length in French. I’ve been a good fellow, and I’ve always told only the truth. And I also haven’t spilled any of the beans that I have in the depths of my pockets about others with lives very much more fabulous than mine … although, as an historian, maybe I owe it to posterity to empty my pockets one day.
The latest, and one of the most enjoyable – for me – of these broadcasts was recorded this week, right here in my suite at Hermitage Court Farm, Isle of Wight. Local ‘Interviewer to the Stars’, John Hannam – host of Britain’s longest-running radio chat show, on 107FM – turned up with his portable studio, and we spent a very merry hour and more putting down a programme which will air … maybe fortunately ... after I have left the island. 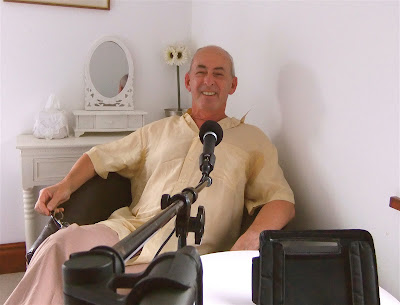 Why was it one of the most enjoyable? Because you so rarely meet an interviewer who has so thoroughly done his homework, who doesn’t ask such foolish and inapposite questions that you have to twist things round frantically to get the interview back on sensible wheels, who is self-effacing to precisely the right degree, so that it is his guest, rather than he, who ‘shines’ … I’ve met far too many of the other kind of interviewer in my life, not to appreciate a consummate professional when I meet one. 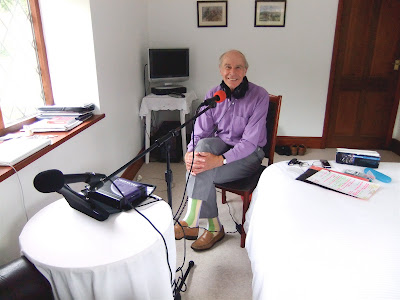 When we were done, I signed my name in the Guest Book that John has kept through the twenty years of his show. The last name there inscribed was that of actress Harriet Walter. Further back appear such memorable men and women as Charlton Heston, Stirling Moss, John Mills, Alan Rickman, Anne Shelton, Jeremy Irons, Cliff Richard, Michael York, Vera Lynn … and as we chatted, after the recording, there came a call arranging his next appointment. With Kenny Ball.
Oh, heck, thirty-five years ago, I was the ‘boy from the office’ when Harold and Ian presented Kenny Ball at the top of the bill in Sunday Concerts at the Blackpool Winter Gardens. It makes you want to blush.
Or laugh out loud.
But, hey, if other people think my life has been fabulous enough that they want to hear me talk about it, that’s fine by me. Me, I know just how fabulous it has been.

PS The famous forty-minute French interview actually still exists! In these days of the World Wide Web, it has been enshrined on the website of Paris’s Canal Académie, and leaps up before me every time I google myself to make sure that I am still alive!
Posted by GEROLSTEIN at 11:44 AM