In Pursuit of a Picnic

.
Sunday evening. And I’m starting to feel just a bit worn and torn with all this lunching and dining and zooming around the Island. I’ll have a couple of quiet days ‘in’, with just picnics on my hilltop.
No.
Monday, young Mr Ryan Burr had an evening off, so I zoomed away in his dashing coupé – occupying for the nonce the seat usually, doubtless, occupied by the latest blonde – for a splendid evening out. Where does one go with the Rising Young Chef of the place? To the Established Star Chef, of course. So, once more, back to the Royal Hotel and ... well, I don’t need to tell you.

Tuesday I shut my ears to all offers and ideas, and around midday snuck quietly and quickly forth to gather picnic materials for the evening. I returned home four hours later. I’d got my picnic, but I’d also got sidetracked. Because I went shopping at Farmer Jack’s. And, since I was at Arreton – this time well-populated with coaches and many more than 77 cars -- I naturally popped into the Daughter for a pint, and couldn’t resist a return to the ‘machines’.
Well, I was wrong – most of them are post-Victorian – but hey! most of them are also in working order. And were they working! Happy punters, equipped with handsful of old pennies, crowded the two rooms, merrily playing machines that are ten times more fun that the flashing-light gizmos of today. I felt I was back in the beloved Blackpool of my twenties! Brilliant.
I should have put a penny into ‘The French Execution’, which I assume is – behind its secret doors -- a gory guillotine exhibition, I should have tried ‘The Drunkard’s Dream’ and watched the room go round, or ‘The Spiritualist Room’. I wonder what happens there. I am too modest, of course, for ‘The Peeping Butler’ (‘adults only’). 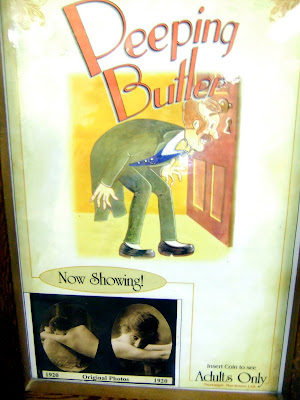 From the machines, I continued on, this time, to the Shipwreck Museum: a splendid collection of maritime memorabilia – even a Feejee Mermaid! -- put together over half a century by Mr Martin Woodward, and supplemented by all sorts of exhibitions of rural machinery and tools. I was a bit alarmed to see the tractor I still use on my farm classed as an antique, and several of the instruments in the ancient forge also looked all too familiar, as did the heap of rusting horseshoes, which gave me just a twinge of ‘homesickness’. 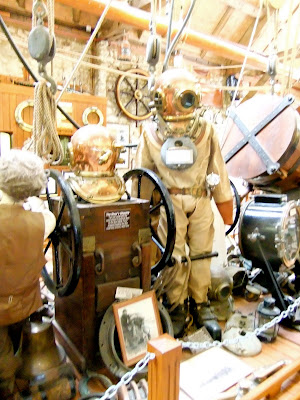 I reckon personal collections always make the best small museums, and such museums – from Dimbola to Brightstone to Arreton – the Island seems to have a fill of.

Before I knew it, more than two hours had gone by. I don’t spend two hours in the Louvre. And I don’t spend ten minutes around ‘the pokies’. Two hours and I hadn’t bought a single picnickable item. I hastened on to Farmer Jack’s.

So here I am at Farmer Jack’s. Nice cheese counter, with familiar French cheeses, but for once I’m not buying French. While I’m here, I’m strictly on ‘local’. Alas, there is no such thing as a local saucisse (although the lady behind the counter tells me it’s been tried), so in that department I have to go foreign.
A rather original looking and slightly floppy cucumber. Heavens, these days a little cucumber costs a pound. It’s a while since I veggie shopped in England. They were 20p in those days.
I’ve been told that they make nice sausages here. None in the cabinet, but the lads are on the ball, and I get sausages made for me, while I wait.
Down to the bakery for some rolls, and – are those cheese straws! .. my picnic is looking OK. However, Farmer Jack, for all his delights, doesn’t do alcoholic beverages so, before I head on home, a small detour is needed. I shall pop quickly down to the Godshill Cider shop and grab some of their ginger beer and cider. 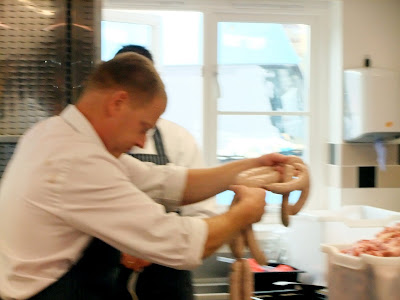 I realised, as soon as I turned into the High Street, that I’d miscalculated. And there was no turning back. If Arreton was buzzing, Godshill was shrieking with activity. The threatening thatch towered over Fred and I, the thronged tearooms tentacled towards us, cavalcades of coaches promised simply to crush us, and people! People wandered unheedingly down the road as if it were a walkway, or simply loitered chattily in front of my moving bumper ... I headed cravenly for the safety of the nice big (free) carpark and … I couldn’t get in. A huge blue bus was stuck in the exit. Traffic piled. Cars wiggled hopelessly. I couldn’t. The bus was in my face and another car two inches behind me.
When finally I managed to get into the parking area, it was full and customers were cruising for a spot. Too much. I would go round and out, I would flee this terrifying place. But a gap opened and in I dashed. 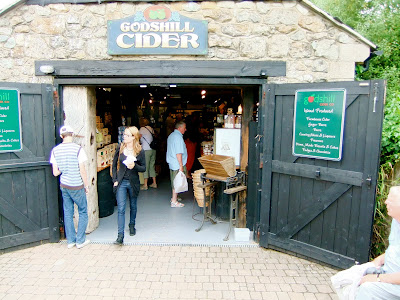 Finally, I arrived at Godshill Cider, and pried my way in. Push and shove, I got to the relevant shelves and loaded my basket with as much as I could carry. ‘Is it always like this?’ I puffed to the lass who took my money. ‘Oh, its busier in the summer’. ‘But this is the summer’. She shook her head as she put my bottles into a carton, ‘next month’.
I shall be in Berlin next month. I’m sure there will be less people, and certainly less coaches, and probably even less money changing hands per square centimetre, there.

Getting out of Godshill’s nice big free carpark was as crazy as getting in. Getting out of the village, similarly. Some of those tea-takers must surely have a death wish. Why did I get the feeling that, if they were squashed, the next squad of tea-takers would just walk unseeingly over them?
But I had my picnic, and enough in reserve that I sha’n’t have to go back too soon.
When I do, I shall do it at dawn, before the tearooms are stirring and while the coaches still sleep ... and never, but never, in the month of August!

I am, however, happy to say that it was all worth it. I had a splendid picnic and the delicious, cold Godshill cider just topped it off nicely. But ..

Until when the Godshill bypass?
Or a ten-story parking building?
Posted by GEROLSTEIN at 8:35 AM