.
LIVING AND LEARNING
Kurt finds that Life (and Wight) are full of surprises

When VB’s editors launched the call for lunching suggestions that put me on the happy track of the Bay Grill, the resulting post-bag also included a suggestion that I get in touch with Matt and Cat, the island’s resident food writers. Do I or don’t I?, I wondered, remembering days when one used to see musical-theatre critics Jack Tinker and John Barber seemingly ‘colluding’ in a corner in the interval at first nights.
But, hey, I’m gone in three more weeks, so where’s the harm?
Since the Chatfields can only get away from business briefly at lunchtime, and since I am true to my vow never to pay for parking while I am on the island, Matt nominated the Dairyman’s Daughter at Arreton Barns for our snack rendez-vous.
I frowned. My experience of Arreton to date had not been good. I had previously wasted good money visiting Arreton Manor (Manor?) on one of the most ghastly, rip-off ‘guided tours’ I can ever remember, and had avoided the Barns as ‘a collection of tourist shops’. As for the pub, it was – I was told – under the same management as the Spyglass Inn, which it is about time I admitted as being – along with Bembridge’s Crab and Lobster – one of the two top Horrible Megapub Experiences in all my Wightish eating-out. But I went. With just a little time to look around before our meeting.
As I turned into the Barns ‘complex’ the sign ‘coaches only’ flashed before my eyes and I quailed. What was I doing here? Surely this was about as un-me as could be imagined. Maybe Matt and Cat haven’t read my stuff, just as I haven’t read theirs.
I parked in a paddock (free!) and counted. There were no coaches, but there were seventy-seven cars. The place was surely buzzing. Tentatively, I peeked inside the first building. Hang on! This was no ‘tourist shop’. Brightly coloured fresh veg. Shelves of interesting bottles and jars. A splendid cheese counter with Gallybagger and Isle of Wight Blue. 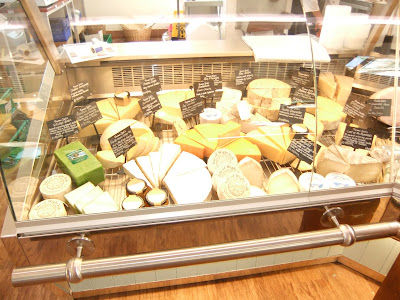 A butchery, even! What was this? ‘Farmer Jack’s’? I’ll tell you what it is? It is a find! For me, anyway. I’m sure everyone on the island already knows that it’s a Food Store of One’s Dreams.
I longed to linger, but I needed to hurry on to take in the rest of the Barns. What else would I find? Well, there is nothing to top Farmer Jack’s, but there are some little craft places and a couple of shops full of Stuff That Nobody Needs (But Buys When on Holiday), and the pub isn’t even a megapub! It’s a thoroughly jolly, pleasing-kind-of-old hostelry, chockfull of ‘ancient’ decoration, with a cheerful barman and a nice big square with heaps of plastic (dammit) chairs and tables and big bright blue (argh! Foster’s!) brellas 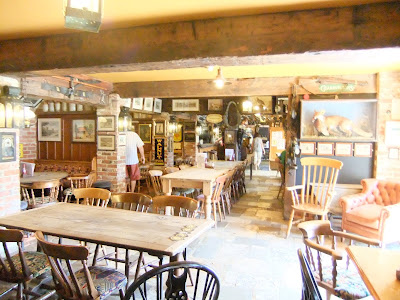 I hastened on, through a dazzling and curiosity-arousing array of old artefacts and machines, piled fascinatingly, everywhere you look, to a ‘Shipwreck Museum’. I didn’t investigate the Ships, though, because I was struck absolutely dumb by the most amazing collection of Victorian slot-machines I have ever seen. I adore Victoriana, automata, and end-of-the-pier machinery. This I will go back for. This I have to see properly. What a gem! Where did it come from? Bembridge? Why in the hell did Bembridge let it go? 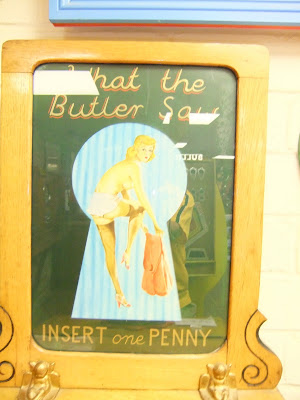 The Church. I must see the church. And above all, I must see the grave of Elizabeth Wallbridge, the ‘dairyman’s daughter’ of history, whom I have encountered in my writings on the 19th century. There it was, carefully restored and well cared-for… My Fuji flashed happily. 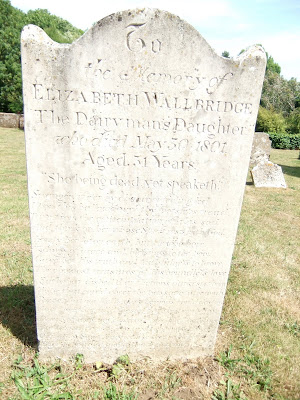 Almost time to get back for my rendez-vous. I looked around. There was the manor. Looking wan. But, next-door, was that a working farm? Surely not. And a cottage (ah, its ‘for sale’) ... but do real people live here? Goodness, there is much more to Arreton than I could ever have guessed. ‘Bunch of tourist shops, indeed!’.

I chickened out of food when I saw the menu (chips with everything, salad with everything) and settled on my ginger-beer shandy (Goodman’s and Britvic) and ‘home-made soup’. I’m not going to ask whose home. If all the soups that are ‘home-made’ on the island really are, and all the ‘fresh’ sea-food really is ‘of the day’, you will have no unemployment problem. Everyone over the age of 10 will be soup-making and fishing 24 hours a day.
Matt and Cat were more adventurous. Matt’s prawn bap simple bulged with seafood (alas, for me, bathed in a viscous mayonnaisey stuff) and I filched – just for reference’s sake -- one of Cat’s not too huge heap of chips. No sissy French fry, a nice butch, hot, English chip. Full marks.
Maybe, next time, I might try a chip or two. Because – surprise of my century – I’m coming back. I’m coming back mainly to spend more time in the museum, but I’ll undoubtedly stock my picnic cupboard at Farmer Jack, and I wouldn’t mind a cheerful pint and a chip or two (home-made?) at the Daughter, either.

Some days are full of surprises.
Posted by GEROLSTEIN at 9:40 AM